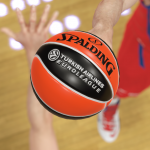 This is Wayback Wednesday, your midweek blast from the past! In this feature, we dig into the archives, look back at the history of basketball gaming, and indulge in some nostalgia. Check in every Wednesday for retrospectives and other features on older versions of NBA Live, NBA 2K, and old school basketball video games in general. You’ll also find old NLSC editorials re-published with added commentary, and other flashback content. This week, I’m taking a look back at Euroleague content in NBA games.

For as long as we’ve been able to mod NBA Live and NBA 2K, people have made total conversions that replace the NBA teams. College basketball mods are quite popular, but foreign league projects have also been in demand. The popularity and prestige of Euroleague has made it a mainstay of total conversion mods, not to mention a league that a lot of gamers would like to see receive its own game. There has been an official management game, of course, but we’re yet to see a gameplay-oriented Euroleague title.

Of course, we have seen Euroleague teams featured in NBA video games as bonus content. Their inclusion has expanded upon the traditional NBA-oriented experience, but has also drawn criticism due to inconsistent quality. It remains to be seen if any developer sees enough interest and potential profit to produce a Euroleague game, but for now, we’ve at least been able to get a small taste of Europe’s premier basketball competition via a handful of NBA titles. Let’s take a look back…way back…

In a way, the inclusion of FIBA teams in NBA Live 08 paved the way for Euroleague teams to feature in future titles. It marked the first time that non-NBA content was licensed for an NBA video game, though obviously several NBA players could be found on those international teams. Although there’s evidence to suggest that the FIBA teams were a Plan B after the idea of classic teams fell through in NBA Live 08, once EA pivoted to including the international squads, they were clearly feeling out interest in non-NBA content. The teams and tournament mode were well-received by gamers, and it wouldn’t be the last time EA looked to expand beyond the NBA. 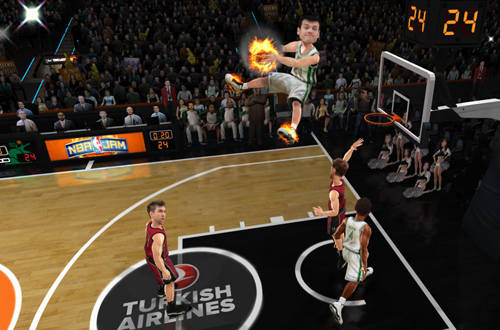 However, it wouldn’t be until NBA 2K14 that Euroleague teams were included in a 5-on-5 simulation game. A total of fourteen teams were added in NBA 2K14: Alba Berlin, FC Barcelona, Real Madrid, CSKA Moscow, EA7 Emporio Armani Milano, Montepaschi Siena, Fenerbahçe Ülker Istanbul, Anadolu Efes Istanbul, Olympiacos Piraeus, Panathinaikos Athens, Maccabi Electra Tel Aviv, Zalgiris Kaunas, Unicaja Málaga and Laboral Kutxa Vitoria. Fortunately, the teams were added in both the PC, Xbox 360, and PlayStation 3 version, and the PlayStation 4 and Xbox One release. Better yet, they were more than just re-skinned NBA teams, akin to our mods.

The Euroleague teams in NBA 2K played with the league’s official ball, and though they all shared the same generic court, it utilised the Euroleague three-point arc and key rather than the NBA dimensions. Games between Euroleague teams also utilised a few different rules, such as the 5-Second Closely Guarded rule. Ironically, these differences presented a few difficulties when overwriting the teams in other roster mods, as they would retain their Euroleague designation and thus the different ball, rules, and court dimensions. Modders would eventually find a way to change that, which freed them up to be overwritten with additional retro teams, or college teams. 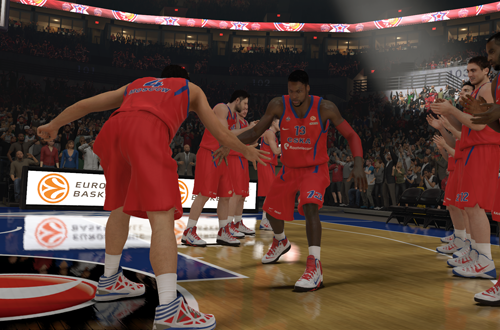 As for gamers who wanted to play with the Euroleague teams, the proper ball and rules added some welcome authenticity, but there was no standalone season or tournament mode for them. They could be used in a custom MyLEAGUE game, but there was no dedicated mode that represented Euroleague’s format, as there had been with the FIBA tournament in NBA Live 08-10, or the WNBA season mode in NBA 2K20. In that sense, they were more like the WNBA teams in NBA Live 18 and NBA Live 19, or the retro teams in NBA 2K post-Jordan Challenge and NBA’s Greatest. As with the retro teams however, their branding became collectable items in MyTEAM.

Obviously the addition of Euroleague teams resulted in the inclusion of many players who otherwise wouldn’t have appeared in video games. It also resulted in some cameo appearances for both former and future NBA players. Luka Doncic notably appears in NBA 2K16, three years before he was drafted, while Nikola Mirotic’s appearance in NBA 2K14 came a year before his arrival in the NBA. Players like Andres Nocioni and Rudy Fernandez, who left the NBA to play in Europe, also made a return to the virtual hardwood. The selection of teams also expanded to 25 beginning with NBA 2K15, which accounted for every team that participated in the 2013-14 season.

However, there was dissatisfaction with the quality of the rosters. The timing of NBA 2K’s release meant that team rosters were outdated for the current Euroleague season. Ratings were criticised for being inaccurate and seemingly arbitrary. The quality and accuracy of player faces also left something to be desired, and more than a couple of the players themselves spoke out against how they were portrayed. It was clear that the Euroleague teams were becoming something of an afterthought, with the number of teams dropping to 21 in NBA 2K17. Not unlike the retro teams before them, they became a much lower priority when they were no longer a fresh selling point. 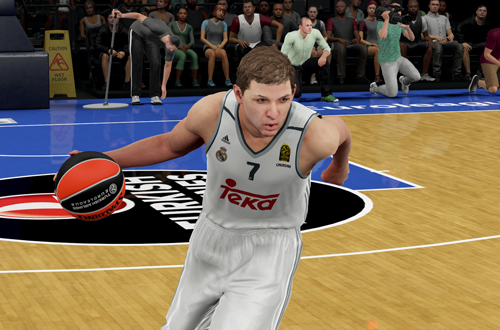 It was therefore no surprise when they were replaced by the All-Time Teams in NBA 2K18, though some gamers were nevertheless disappointed. I have heard that the Euroleague license is rather expensive, and it’s quite likely that the teams’ usage didn’t justify that high cost. The All-Time Teams have also been effective at making some additional historical NBA players available without the need for year-specific retro teams, and have been more appealing content in MyTEAM. To that end, I’d suggest that it was the right choice to make in an NBA-licensed game, but the removal of the Euroleague teams was still unfortunate for gamers who enjoyed playing with them.

We can also look at it as a missed opportunity, especially after the roster expanded to 25 teams, and considering what NBA 2K has since done with the WNBA as far as implementing a single season mode. Providing a dedicated season or even just a tournament mode for the Euroleague teams would’ve given them more significance, and in turn given gamers more incentive to play with them. At the same time, it would’ve likely taken focus and development time away from other aspects of the game, and at the end of the day, NBA 2K is an NBA title. It’s the closest we’ve come to having a Euroleague game, but without a dedicated mode, it’s not really that close.

In all fairness, it was still a respectable effort. Between adding new teams and players over the years, representing various aspects of the league from the court and ball to rules that differed from the NBA, there was more detail than one might’ve expected. Inaccuracies with some of the team branding and player likenesses, as well as the absence of a dedicated season or tournament mode, do leave the whole endeavour with an element of “What If”. It’s fair to say that more than a few gamers enjoyed the inclusion of Euroleague teams all the same, and would welcome their return; or a standalone game, for that matter. Only time will tell if either ever comes to pass.

Euroleague was a great addition if only 2k put more effort to that.

Looking back, it’s a real shame they didn’t at least put in a special single season mode, or at least a tournament mode.