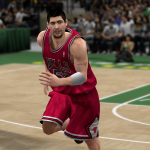 This is Wayback Wednesday, your midweek blast from the past! From retrospectives of basketball games and their interesting features, to republished articles and looking at NBA history through the lens of the virtual hardwood, Wednesdays at the NLSC are for going back in time. This week, I’m taking a look back at another ten players that became familiar faces back in familiar places.

If you’ve been checking out my Wayback Wednesday features for some time now, you probably know the drill when it comes to this topic. For those who are new or perhaps missed the first four instalments, this is a series in which I profile stars and other noteworthy NBA players who returned for a second stint with a team that they previously played for. In other words, they’re the familiar faces back in familiar places. It’s a counterpart to my familiar faces in strange places series, which profiles players in stints that were unusual and sometimes forgotten. 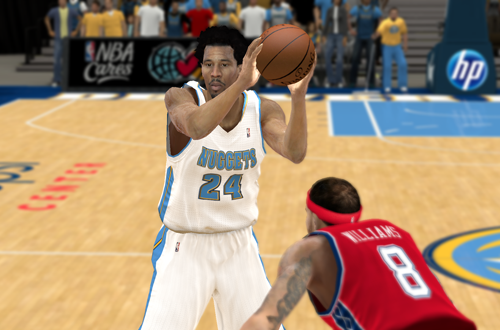 If you associate Andre Miller with the Denver Nuggets, I’d say you’re not alone. His 447 games in a Nuggets uniform were the most he tallied for any of the nine teams he played for. If his tenure in the Mile High City seems longer than that, it’s most likely because those games were played across two separate stints. Miller signed with the Nuggets in 2003, and was sent to Philadelphia in 2006 in exchange for Allen Iverson. After signing with the Trail Blazers in 2009, an offseason trade in 2011 sent him back to Denver, where you’ll find him in NBA 2K12. I personally remember the stint from NBA 2K13 however, as he became my teammate in a memorable MyCAREER game. 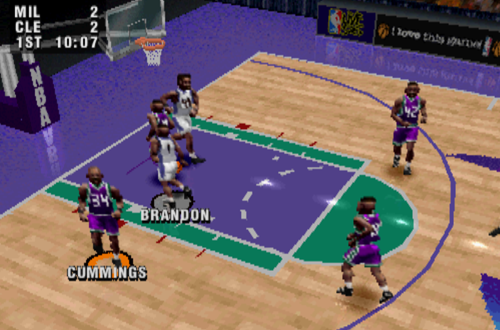 Selected second overall in 1982 behind James Worthy, Terry Cummings played his first two seasons for the then-San Diego Clippers. He was a fine player from Day 1, but became a two-time All-Star in Milwaukee, where he was part of some tough Bucks teams during the 80s. Cummings was traded to the Spurs in 1989, where he spent the next six seasons. He then had a one year reunion with the Bucks in 1996, now backing up All-Star Vin Baker. It can be seen in the PlayStation version of NBA Live 96, as he was absent on PC. The San Diego Clippers are in the EXE file and can be assigned as a player’s “Drafted by” team though, suggesting that he was a late cut. 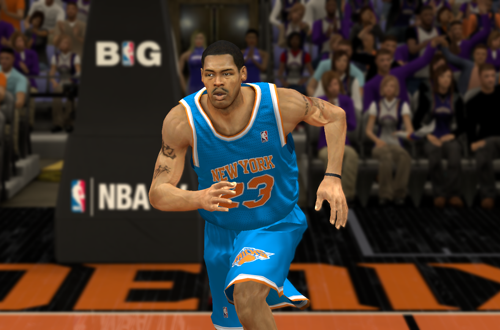 Although Camby’s best years were with the Denver Nuggets, his tenure in New York was nevertheless significant. He made an appearance in the NBA Finals with the underdog Knicks of 1999, starting the final three games of the series while Patrick Ewing sat due to injury. He also infamously butted heads with Knicks coach Jeff Van Gundy; literally, while Gundy was trying to restrain him during a melee! After ending up in Houston later in his career, he was traded back to the Knicks where he played his final season. NBA 2K13 is where you’ll see that second stint in New York. He also has a noteworthy appearance in NBA 2K14, but that’s a story for another article. 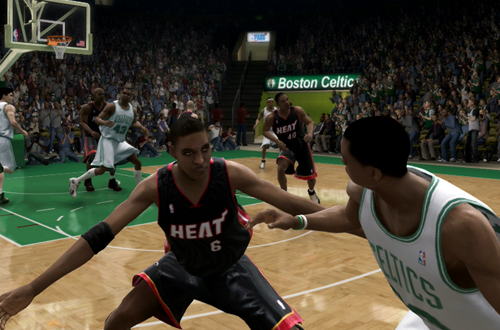 Talk about bad timing! Eddie Jones had a respectable NBA career, but was twice traded by teams that went on to win the championship the following year. Not only that, but the player that they received for Jones stuck around and won a ring. The Lakers traded him for Glen Rice in 1999, and after a short stint with the Hornets, he was sent to the Heat. He was one of their top scorers until Dwyane Wade arrived, and in 2005, was traded to Memphis for Jason Williams. A year after they won the title, the Heat brought him back after the Grizzlies cut him. Bad timing struck again as they fell to the Bulls in the first round. It’s a signing reflected in NBA Live 07’s updates. 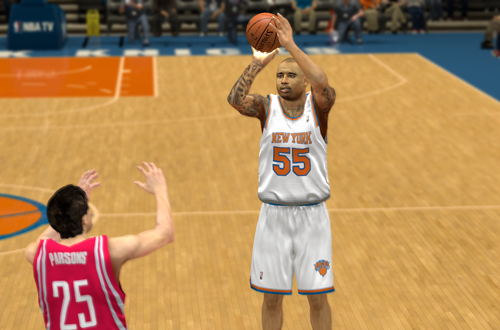 An original member of the “seven seconds or less” Suns, Quentin Richardson actually only played the one season in Phoenix in 2005. He was traded to the Knicks in the offseason, spending the next four years there. Richardson then played for the Heat and Magic from 2009 to 2012, when Orlando cut him loose. He sat out almost the entire 2013 campaign, signing with the Knicks in April and appearing in one regular season game in which he shot just 1-for-11 from the field, but did have 10 boards. The roster updates for NBA 2K13 reflected this move, which was fortunate as he did appear in five Playoff games for them, playing sparingly in what turned out to be his swansong. 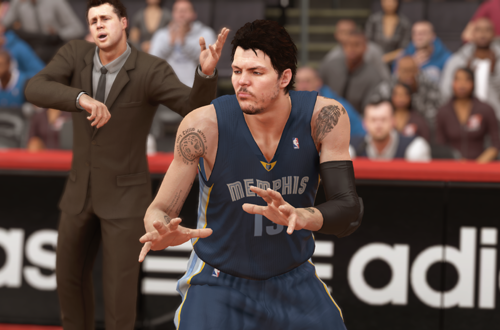 As a journeyman, Mike Miller had ample opportunity to become one of the familiar faces who made their way back to familiar places. However, he only ever had a second stint with one of his former teams. Many fans may associate Miller with the Heat, where he won back-to-back titles in 2012 and 2013. Following that second title run in Miami though, he signed on with the Memphis Grizzlies, where he’d actually spent a majority of his career, winning the Sixth Man award in 2006 as a key player on a promising young squad. The return can be seen in NBA 2K14 and NBA Live 14, after which the 2001 Rookie of the Year reunited with LeBron James in Cleveland. 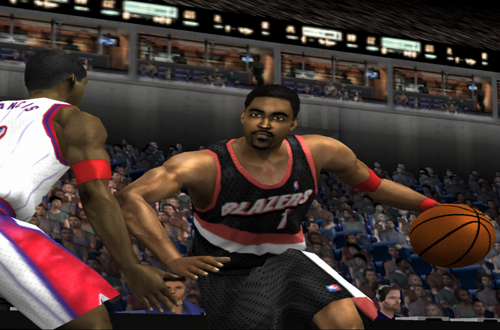 90s basketball fans will most likely remember Rod Strickland playing for the Trail Blazers or Bullets/Wizards, as those are the teams he played the most games for. If you were a fan in the late 80s/early 90s, you may also remember that he began his career with the New York Knicks, and played a couple of years with the San Antonio Spurs. His career after 2000 featured several stints you may have forgotten, including a return to the Trail Blazers in 2001. You’ll see him back in Portland in NBA Live 2002, but by then he’d actually moved on. Strickland signed on for a year with the Miami Heat in October 2001, which marked his final season as a regular starter.

It’s fair to say that Devin Harris doesn’t hold any grudges, at least when it comes to his NBA career. A promising young guard with Dallas in the mid 2000s, he was traded to the Nets for Jason Kidd; a deal that allowed Kidd to join the ranks of familiar faces back in familiar places. Kidd won a title with the Mavericks in 2011, while Harris peaked in 2009, averaging 21.3 points and 6.9 assists. The Nets traded him to Utah for Deron Williams in 2011, and in 2013, he signed with Dallas again. They traded him in 2018, but he then returned for a final season. NBA 2K14 and NBA Live 14 include that first comeback, while NBA 2K19 and NBA Live 19 reflect his swansong return. 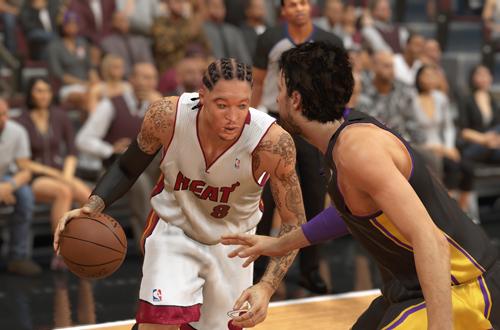 Back in 2008, there was debate as to whether the Bulls should’ve drafted Michael Beasley with the first pick instead of Derrick Rose, with Beasley going to the Heat second overall. By 2011, that debate was over. Rose became the youngest MVP in history, and Beasley became a casualty of freeing up cap space to bring in LeBron James and Chris Bosh. He had a breakout season of his own in 2011, but it was also his peak. Beasley returned to the Heat for the 2014 season, no doubt hoping to be a part of a threepeat. The Spurs stood in the way of that, and he ended up being a part of the post-LeBron Heat for a year. His 2013 return is in NBA 2K14 and NBA Live 14. 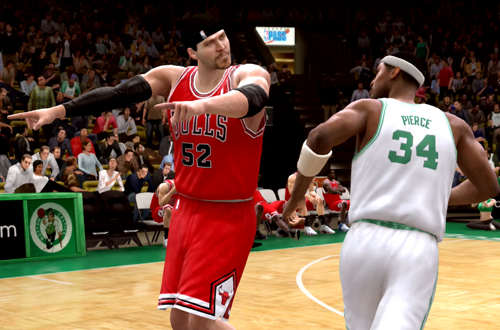 When the Chicago Bulls signed Brad Miller in 2000, it was part of an underwhelming offseason in which they missed out on all the big names. Miller was a solid big man during his first stint in Chicago, but they traded him to the Indiana Pacers along with Ron Artest/Metta World Peace for Jalen Rose. When the Bulls traded for Miller in 2009, he returned with two All-Star appearances and Playoff experience under his belt. It helped a young, rebuilding Bulls team to be more competitive, and get a taste of the postseason. Roster updates added the midseason trade to NBA Live 09 and NBA 2K9, while NBA Live 10 and NBA 2K10 feature his final full year in Chicago.

As you can probably guess, there are more examples of players who became familiar faces back in familiar places. Although some players never return to the team they’re most often associated with after they move on, others are open to signing on for a second stint. There’s also a growing trend of players signing ceremonial contracts so that they can officially retire as a member of their preferred team, which arguably falls somewhere between being familiar faces back in familiar places, and examples of NBA returns that were over before they could begin. To me, it’s all interesting trivia that we can find when we dust off some of our favourite old basketball games.