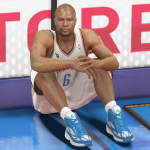 Yes, there are even more examples of familiar faces in familiar places, and video games that represent those tenures! Many well-known players who leave the team they’re most closely associated with ultimately end their careers in strange (or at the very least, different) places, but quite a few of them do end up donning a familiar jersey once again. As I’ve said before, while one might think that the familiarity of the situation would make those stints stand out, sometimes we end up forgetting that stars and key rotation players returned to their former team.

On the other hand, there are also players whose returns were quite successful, and thus tend to be remembered. Of course, whether it’s a low-key homecoming, a high profile farewell tour, a brief reunion, or the welcome return of a player that still has a lot left in the tank, they lead to some interesting situations in the real NBA, and on the virtual hardwood. Once again, I’ve compiled ten more examples to reminisce about through the lens of basketball video games, so let’s take a look back…way back… 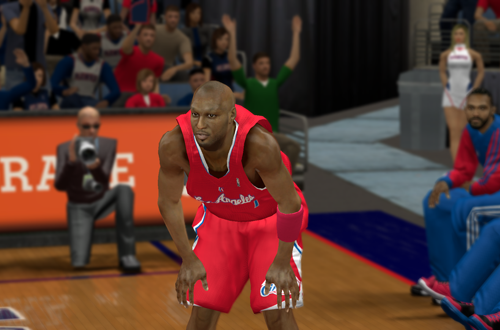 In one of the final roster updates for NBA 2K14, Lamar Odom joined the ranks of familiar faces in strange places when he signed with the New York Knicks. As I’ve mentioned in previous articles, it also places him on the list of players who have only played for certain teams in games, as he didn’t tally a minute for the Knicks. A year before his unusual tenure in the Big Apple however, Odom spent a forgettable season with the Clippers, where he began his career in 1999. Although he played in all 82 games, his numbers were a far cry from what they’d been as a rising star for Los Angeles’ second team. You’ll find that overlooked return in the rosters of NBA 2K13. 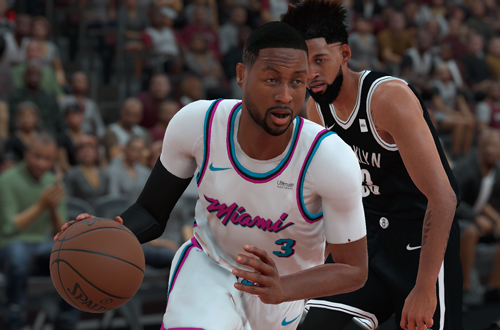 Even though it was kind of fun having Dwyane Wade on the Bulls – where he was yet another familiar face in a strange place – it was far too late to get really excited about. Wade’s stint in his hometown only lasted a year, after which he reunited with LeBron James. The reunion wouldn’t last a whole season though, and Wade himself would take his talents (back) to South Beach in 2018. This move was of course included in official roster updates for NBA Live 18 and NBA 2K18, while NBA Live 19 and NBA 2K19 feature his farewell tour on the team he won three championships with. Hindsight being 20/20, it’s safe to say that he never should’ve left in the first place. 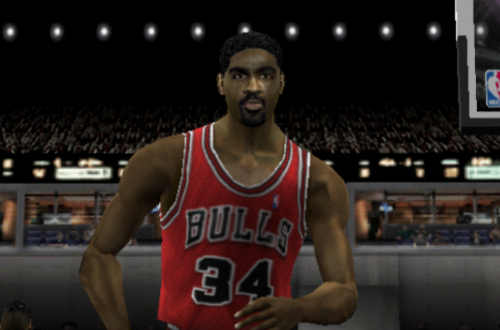 Let’s get back to examples of familiar faces back in familiar places that many may have forgotten. Charles Oakley is generally associated with the New York Knicks, where he played 10 of his 19 NBA seasons. He never returned to the Knicks after being traded to the Raptors for Marcus Camby, but he did have a second stint with the team that he began his career with: the Chicago Bulls. NBA Live 2002 and NBA 2K2 are the titles that cover his single season return to the Windy City; a tenure in which he was a mentor for Eddy Curry and Tyson Chandler, drafted straight out of high school. Ironically, thanks to their late signing, neither of them is in NBA Live 2002. 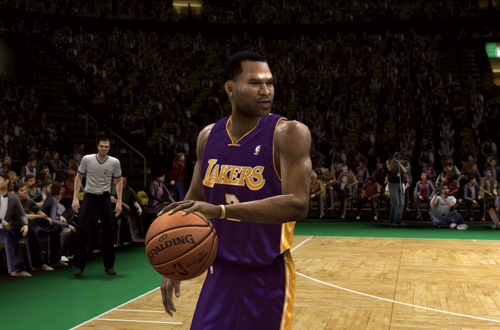 Out of all the familiar faces back in familiar places covered in this list, Derek Fisher has easily had the most successful return; at least when it came to donning a Lakers jersey once again. Moving on to the Warriors after the Lakers fell to the Pistons in the 2004 Finals, Fisher spent two years with Golden State and one with the Jazz before joining the Lakers prior to the 2008 season. A Laker from NBA Live 08/NBA 2K8 through to NBA 2K12, Fisher eventually joined the Thunder. After a short stint in Dallas to begin the 2013 season, he was back in Oklahoma City for a second run. A roster update for NBA 2K13, and NBA Live 14 and NBA 2K14, reflect that move. 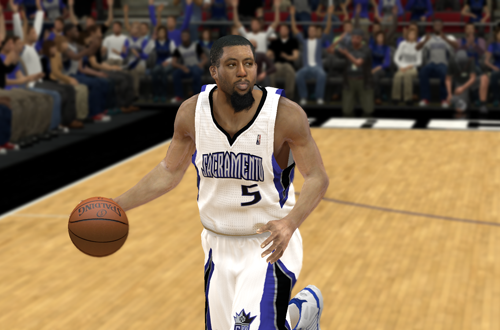 Although he isn’t as big of a name as most of the other players on this list, John Salmons enjoyed a respectable career that included a few seasons as a reliable scorer on the wing. Salmons bounced around the league, but he is arguably most closely associated with the Sacramento Kings, having spent time with them in six of his thirteen NBA seasons. It was there that he broke out as a double digit scorer, before being traded to the Bulls after two and a half seasons as a core rotation player in Sacramento. He returned to the Californian capital in 2011 for another two and a half year stint – as seen in NBA 2K12 – playing similar minutes, but getting fewer shots. 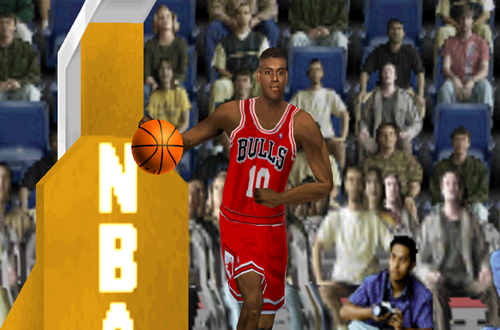 I mentioned Will Perdue in my first article covering familiar faces back in familiar places, but he wasn’t the only member of the first Bulls threepeat who returned to Chicago for the 2000 season. B.J. Armstrong, who left the team via the expansion draft in 1995, also signed on with the Bulls in a move that can be seen in NBA Live 2000. Like Perdue, his second stint in the Windy City wasn’t as impressive as the first, which had yielded an All-Star appearance in 1994. Armstrong did start in 18 of the 27 games he played though, averaging a respectable 7.4 points in 21.6 minutes per game. While Perdue played one more year, Armstrong retired at the end of the season. 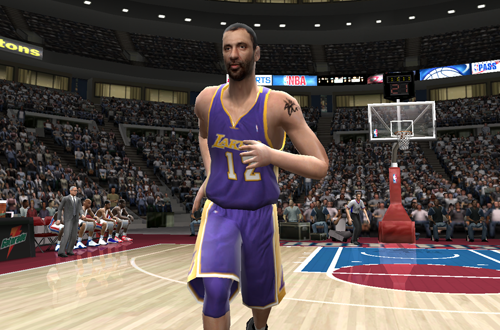 By the time Vlade Divac’s return to the Los Angeles Lakers was being reflected in NBA Live 2005 and ESPN NBA 2K5, he’d already carved out an interesting history with the team. Entering the NBA as the Lakers’ replacement for Kareem Abdul-Jabbar, Divac established himself as a solid big man, helping them reach the Finals in 1991. In 1996, he was traded to the Charlotte Hornets for the 13th pick of the Draft; a promising high schooler named Kobe Bryant. Later, as a member of the Sacramento Kings, he was part of a bitter rivalry with his former team. His association with the Kings makes it easy to forget his return to LA, but you’ll see it in those classic games. 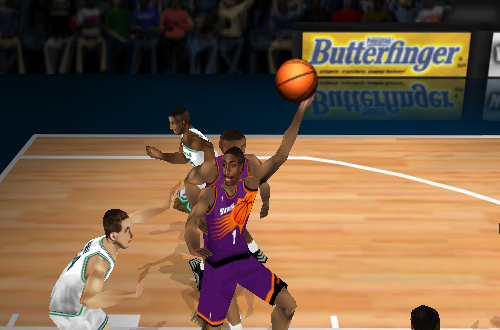 A thrown towel led to Robert Horry being shipped from the Phoenix Suns to the Los Angeles Lakers in 1997. In time this proved to be a trade that helped the Lakers win three straight championships from 2000-2002, but in the short term, it also sent Cedric Ceballos back to the team he began his career with in 1990. It wouldn’t be a lengthy return for Ceballos as he was traded to the Dallas Mavericks for Dennis Scott at the 1998 deadline, but he was back with his old team long enough to appear on their roster in NBA Live 98. The 1992 dunk champ’s prime was far too short, so I’ve enjoyed giving him some recognition as a familiar face in familiar and strange places. 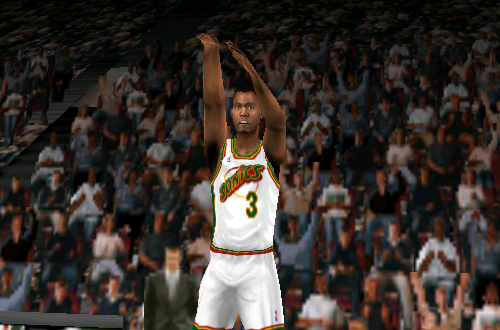 With the three-point revolution that’s taken place in the NBA in recent years, it’s easy to overlook a marksman like Dale Ellis. That’s a shame as he could really shoot the ball, and indeed, he was second in threes made when he retired. Ellis played for six teams in seventeen NBA seasons, breaking out as one of the league’s top scorers when Dallas traded him to Seattle. He remained a scoring threat as his career took him to Milwaukee, Denver, and San Antonio. Ellis returned to the SuperSonics in 1997, though the move missed the cut for NBA Live 98 and thus wasn’t reflected until NBA Live 99. As seen in NBA Live 2000, he also had a brief second run with the Bucks. 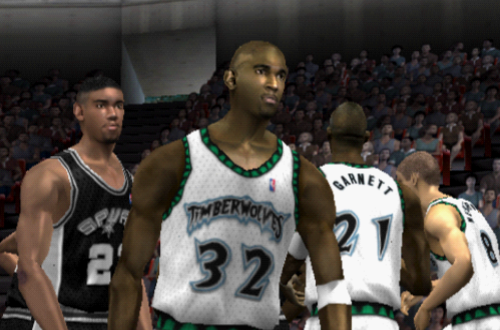 Despite having one of the plainest names in NBA history – right up there with Fred Jones – Joe Smith enjoyed a long and noteworthy career. He was never an All-Star, but he did end up tying Chucky Brown and Jim Jackson’s record by suiting up for 12 different teams. On a few occasions, his journeyman career took him back to some familiar places. After an illegal deal voided his contract in Minnesota and forced him to Detroit for a season, his return to the Timberwolves can be seen in NBA Live 2002 and NBA 2K2. Smith’s brief second stints with the Philadelphia 76ers and Cleveland Cavaliers can also be seen in roster updates for the 2007 and 2009 season releases.

There are probably more examples of familiar faces ending up in strange places than there are familiar faces making their way back to familiar places, but no doubt there are more names to recall in future articles. For now, it’s been fun to reminisce about players who rejoined their former teams, and the video games where those stints can be seen. As I’ve said many times before, one of the most enjoyable parts of revisiting old games is seeing their rosters, and being reminded of where players were during a particular season. I may have used the term “interactive almanacs” to the point of it becoming cliché, but it’s an apt term, and one of the best parts of retro hoops gaming.