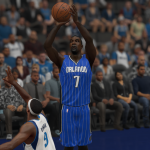 This is Wayback Wednesday, your midweek blast from the past! In this feature, we dig into the archives, look back at the history of basketball gaming, and indulge in some nostalgia. Check in every Wednesday for retrospectives and other features on older versions of NBA Live, NBA 2K, and old school basketball video games in general. You’ll also find old NLSC editorials re-published with added commentary, and other flashback content. This week, I’m taking a look back at even more NBA players who became familiar faces in strange places, and those stints in video games.

It’s time to once again look back at the various stints of NBA players that we may have forgotten, or at least don’t think about too often. We expect to see role players bounce around the league, as teams seek out their services to bolster their rosters. Although it’s getting more and more common to see perennial All-Stars changing teams in their prime as well as late in their careers, it’s still often a surprise, and seeing them in their new uniform takes some time to get used to. Funnily enough, photos of them wearing their old jersey eventually seem like the stranger image!

As I’ve noted before, in addition to photos, footage, and records in resources such as Basketball Reference, we’ve got another way of documenting familiar faces in strange places: video games. Fire up an old video game, and you’re bound to see at least a few players on teams you don’t remember them playing for, including some big names who were in the midst of a less memorable stint than one that usually comes to mind. I’ve got another ten examples to share today, so let’s take a look back…way back… 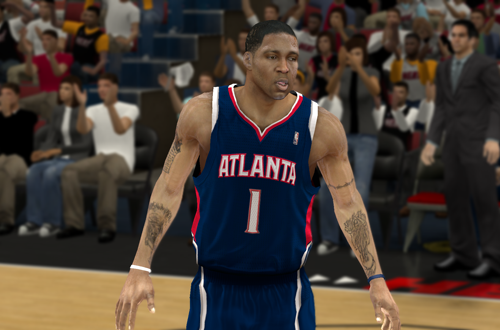 T-Mac is a player you might’ve expected me to cover in one of the first two articles, but hey, you need to leave some big names for later parts in the series! Anyway, when most of us think about Tracy McGrady, we’ll recall his early days in Toronto, his breakout in Orlando, or his years in Houston alongside Yao Ming, with a lot of “What Ifs” at every stop. We tend not to think about his later years, but if you fire up NBA Live 10 or NBA 2K10 with updated rosters, there he is in New York. In NBA 2K11, he’s in Detroit; in NBA 2K12, Atlanta. His final year in San Antonio didn’t even include a game played in the regular season, but you can change that in NBA 2K13. 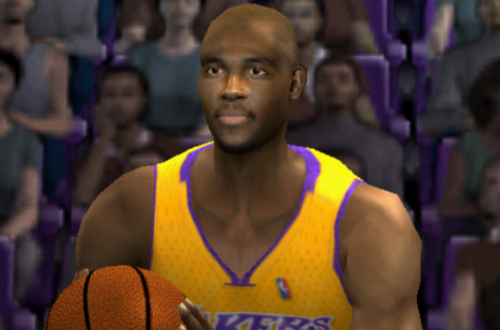 One of the best scorers of the 90s, and a player who’d be even more dominant today, Mitch Richmond is generally remembered for his time with the Warriors as a member of Run-TMC with Tim Hardaway and Chris Mullin, or his Kings years that included an appearance on the cover of NBA Live 97. His career fizzled out as the 90s wound down however, and by his final season he was coming off the bench for the defending champion Lakers. While it was unusual to see a once-perennial All-Star barely getting court time, it allowed him to retire with a ring after enduring several years on lottery-bound teams. Laker Richmond can be seen in NBA Live 2002 and NBA 2K2. 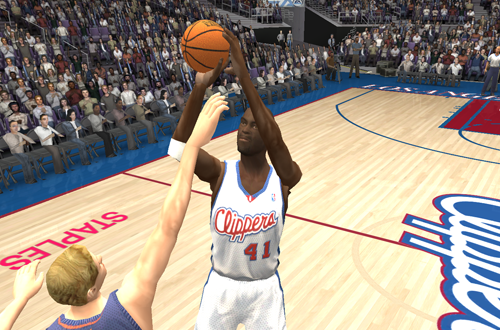 Speaking of deadly scorers from the 90s, Glen Rice is another memorable name in the expansive group of familiar faces in strange places. Like fellow sharpshooter Mitch Richmond, Rice won a championship with the Lakers, though he played a larger role in their 2000 victory. Prior to that, he’d been an All-Star with the Charlotte Hornets, and a Three-Point Shootout champion with the Miami Heat. After leaving LA, Rice had forgettable stints with the New York Knicks and Houston Rockets, as you’ll recall if you scroll through the rosters of NBA Live 2001, NBA Live 2002, and NBA Live 2003. An 18-game stint with the Clippers in the 2004 season was his NBA swansong. 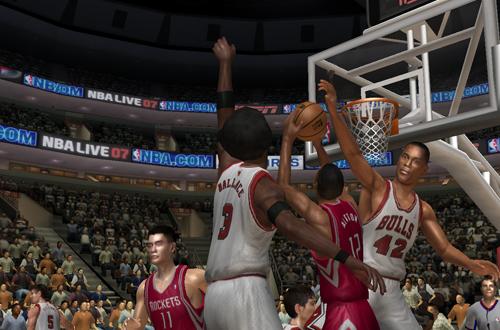 I’m surprised that I haven’t found a way to mention this more often in other Wayback Wednesday articles, because it’s a stint I remember quite well, and have rather strong feelings about; negative feelings, mind you. In 2006, Ben Wallace was looking for a big payday, and the Bulls were looking to make a big move in free agency. The result was a doomed union of a player past his prime and not worth $15 million, and a team that needed better leadership and more star power. It was clear Wallace’s heart was still in Detroit, along with his best years. I wasn’t fond of him before this stint, and it didn’t end up changing my opinion. Appropriately, it can be seen in NBA Live 07. 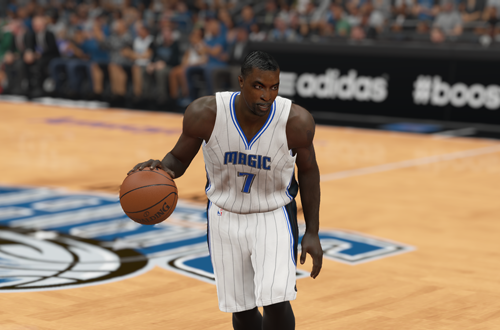 From a Ben I’m not a fan of, to a Ben who was my favourite active player for a time. Ben Gordon bucked a trend of players reaching greater heights after leaving the Bulls via trade or free agency. His post-Bulls career with the Pistons and Bobcats wasn’t spectacular, to the point where a lot of fans likely don’t remember that he played a final season with the Magic (and understandably so). Dust off NBA 2K15 or NBA Live 15 however, and you’ll see him on their roster. The former Sixth Man of the Year – the only player to win the award as a rookie – did sign on with the Warriors in 2015, but the defending champions ultimately cut him before the season began. 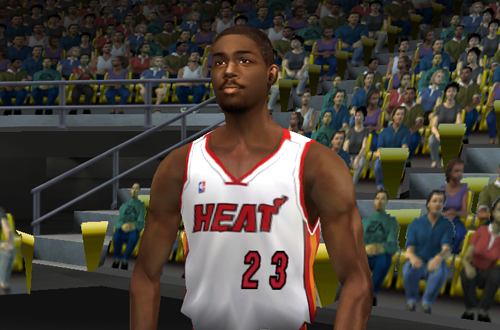 For those who remember Cedric Ceballos – shout out to The X here – you most likely remember him from his first stint with the Phoenix Suns, perhaps winning the 1992 Dunk Contest with his blindfold dunk. You likely also remember him playing for the Lakers in the mid 90s, and possibly his return to Phoenix in 1997, when he was traded for Robert Horry. You might even recall that he spent a couple of years with Dallas. What you may have forgotten is that Ceballos was out of the league by the age of 31, splitting his eleventh and final season between the Pistons and Heat. His Pistons stint is skipped in NBA Live 2001 PC, which was released after he was traded to Miami. 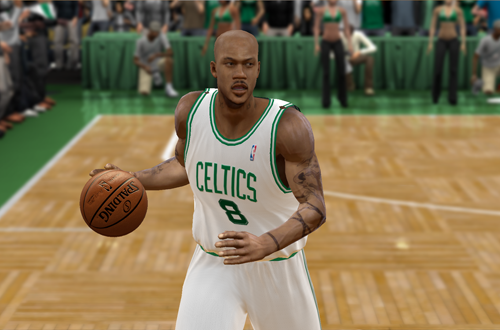 Between the Celtics’ trips to the NBA Finals in 2008 and 2010 came a second round exit at the hands of Dwight Howard and the Magic. One of the players on that 2009 Celtics squad was Stephon Marbury, who joined the team after a prolonged divorce from the New York Knicks saw him sit out from January 2008 to February 2009. In signing with the Celtics (a move reflected in a midseason roster update for NBA Live 09 and NBA 2K9), Starbury reunited with Kevin Garnett, his teammate in Minnesota where they’d been pegged as the duo of the future. It didn’t pan out much better in Boston, and Marbury’s stint in Celtics green turned out to be his last stop in the NBA. 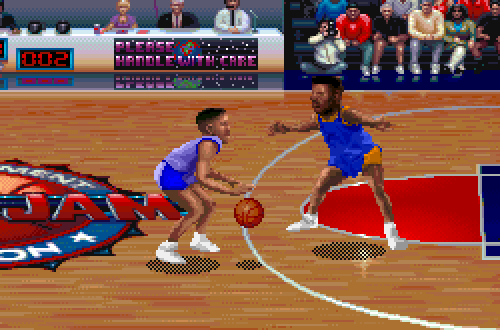 While the most familiar faces in strange places are the players who were marquee names, if you followed the NBA in the 90s, you were no doubt aware of Oliver Miller. Infamous for his hefty frame and the occasional run-in with mascots, the lesser-known Big O made a Finals appearance as a rookie with the Phoenix Suns in 1993, and was later one of the first players to play for the Raptors after they picked him in the expansion Draft. As you can see in NBA Jam Tournament Edition though, he also played a year for the Pistons, alongside a rookie Grant Hill. For some reason he has identical ratings to Terry Mills in that game, which isn’t at all appropriate. 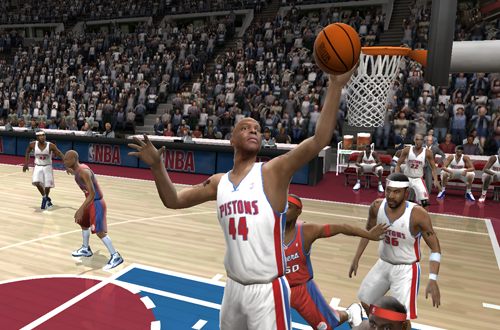 Thirty years ago in 1990 – excuse me a moment, I need to sit down – Derrick Coleman was taken by the then-New Jersey Nets with the first overall pick of the Draft. He had tremendous potential, and in his first few years, looked as though he might one day be among the best players in the league. Injuries and attitude problems would derail that potential, and after being traded to Philadelphia for Shawn Bradley in 1995, he would bounce back and forth between the 76ers and the Charlotte Hornets. That is until his final season in Detroit, where he’d attended high school. Coleman played in just five games for the Pistons, but nevertheless he’s on their roster in NBA Live 2005. 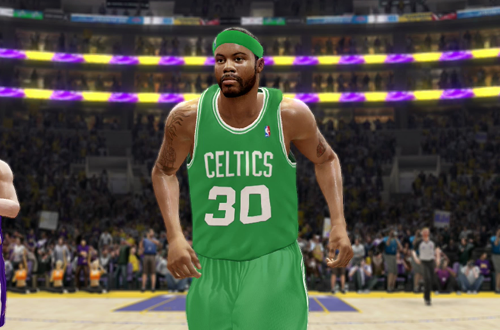 Now, Rasheed Wallace’s best example of being one of the familiar faces we’ve seen in strange places would be his one-game stint with the Atlanta Hawks in 2004, coming after starting the season with Portland, and finishing it with the champion Pistons. Aside from unofficial roster updates though – and even then, only if they came out in time – we didn’t see it in games. We did see his single season with the Boston Celtics in NBA 2K10 and NBA Live 10 though, and his surprising comeback in 2013 in NBA 2K13. For the record, he’s also one of the few players who doesn’t appear in the roster of NBA 2K11, but does have complete artwork left on the disc that can be used.

When we think of familiar faces in strange places, it’s usually an unceremonious end or disappointing tenure, and many of the players on this list are no exception. At the same time, these stints allowed a couple of them to play in the Finals, and even finally win a ring. It’s worth noting that while these stints don’t represent the best moments of their careers, many of them did achieve great things in the uniforms we’re far more used to seeing them in. The fact that they became familiar faces in strange places can be depressing, but it doesn’t erase what they achieved beforehand. We can appreciate these stints for their weirdness, and their famous stints for their accomplishments.

I recall the Ben Wallace free agency covered by Pressball (newspaper): the Pistons had offered 48/4, then a 60/4 by the Bulls got leaked. Detroit amended the offer to 52/4 and played hardball on it. I got upset that he choose a few millions more on the other side(

Last edited 9 months ago by beegees

That sounds familiar. As I said on Twitter, it was one of GarPax’s early red flags, and it spoke volumes that the Pistons were wary of paying him that much.