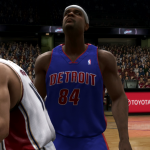 This is Wayback Wednesday, your midweek blast from the past! In this feature, we dig into the archives, look back at the history of basketball gaming, and indulge in some nostalgia. Check in every Wednesday for retrospectives and other features on older versions of NBA Live, NBA 2K, and old school basketball video games in general. You’ll also find old NLSC editorials re-published with added commentary, and other flashback content. This week, I’m taking a look back at another collection of players that became familiar faces in strange places.

Yes, it’s time for a fifth instalment in my ongoing series profiling familiar faces that ended up in strange places! In case you missed the previous articles, or the title is a bit too esoteric, this series looks back at well-known players that are generally associated with a particular team, and their stints wearing unfamiliar jerseys that looked strange at the time as well as in hindsight. Because video games capture these unusual stints, I’m also looking at them through the lens of the virtual hardwood. As I’ve said before, I love the “interactive almanac” aspect of old video games!

The ten familiar faces in strange places that I’m profiling this time around feature a mix of several big names, as well as some prominent role players from back in the day. Although it’s more jarring to see All-Stars and future Hall of Fame inductees wearing unfamiliar uniforms, we can still come to associate long-tenured role players with a certain team as well. As such, it’s similarly strange when they move on to a new club, both in real life and in video games. Let’s take a look back…way back… 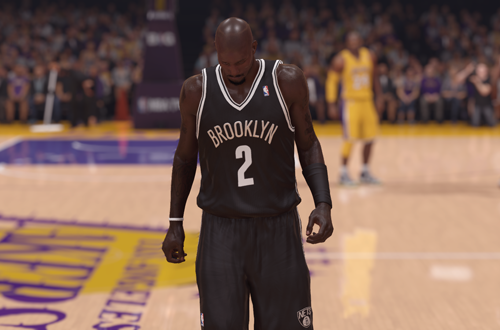 Brooklyn wasn’t the second stop in Kevin Garnett‘s long career, so the sight of him in a jersey other than those of the Minnesota Timberwolves wasn’t new. However, while seeing him in Celtics green was unfamiliar and strange at first, after six seasons in Boston which included a championship, two NBA Finals appearances, All-Star nods, and perennial relevancy, we all grew used to it. Conversely, his time with the Nets was brief and less productive, and thus stands out as unusual. KG went from being an All-Star in his final year with Boston to an afterthought in Brooklyn, despite the fact he remained a starter. This odd tenure is captured in NBA Live 14 and NBA 2K14. 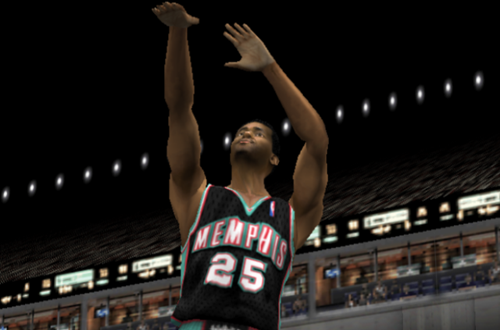 Shaquille O’Neal was the Orlando Magic’s first superstar, while Tracy McGrady was their second. If not for their injuries, Anfernee Hardaway and Grant Hill might’ve been in the running for that distinction (more on them later). However, as the first Draft pick in team history, Nick Anderson went from being Illinois Mr. Basketball to Mr. Magic. Even though the arrival of Shaq and Penny placed Anderson lower in the pecking order, he remained a constant starter and key player throughout his tenure in Orlando. That’s why it felt so strange to see him playing for the Sacramento Kings and later Memphis Grizzlies in NBA Live 2000, and other early 2000s hoops titles. 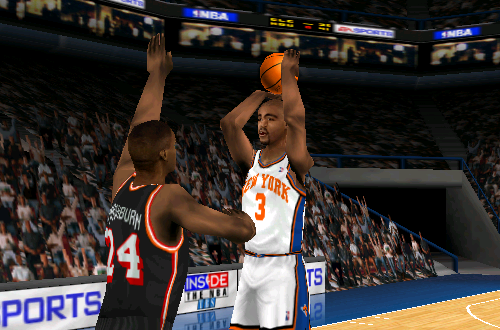 Drafted the year after Nick Anderson and often starting alongside him, Dennis Scott was another mainstay for the Orlando Magic through the mid 90s. The former holder of various three-point records would arguably be a star in today’s league, but his career ended abruptly in 2000. By that point he’d left the Magic, splitting the 1998 season between Dallas and Phoenix, and the 1999 campaign between Minnesota and New York, before one final year with the then-Vancouver Grizzlies. The start of this nomadic period at the tail end of his ten year career can be seen in NBA Live 98, with roster updates for NBA Live 99 and NBA Live 2000 reflecting his final NBA stints. 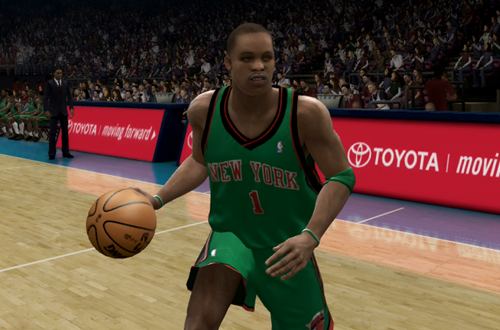 Looking back now, any of Steve Francis‘ stints other than his time with the Houston Rockets would arguably qualify for a list of familiar faces in strange places. After he was traded to Orlando for Tracy McGrady, we barely had time to get used to him in a Magic uniform before he was shipped to New York midway through the 2006 season. It was here that he formed a duo with Stephon Marbury that – if you can believe it – drew comparisons to the legendary Knicks backcourt of Walt Frazier and Earl “The Pearl” Monroe. Suffice to say it didn’t pan out quite as well, but it made for a fun video game scenario, as you can see for yourself in NBA Live 07 and NBA 2K7. 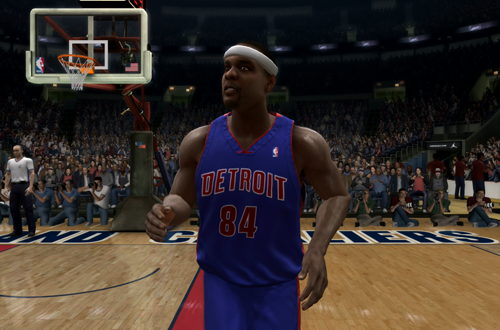 As noted in a previous article, Chris Webber ended up as a familiar face back in a familiar place when he concluded his career with the Golden State Warriors. Of course, seeing as how he spent far more time with the Washington Bullets/Wizards and Sacramento Kings, in a way it was an unfamiliar place. It was a homecoming though, as was his brief stint with the Detroit Pistons in 2007. Roster updates for NBA Live 07 and NBA 2K7 reflected C-Webb’s stint in his hometown, but as far as his NBA career is concerned, seeing him in a Pistons jersey was an unfamiliar sight. His decision to wear number 84 also makes it stand out as being rather unusual. 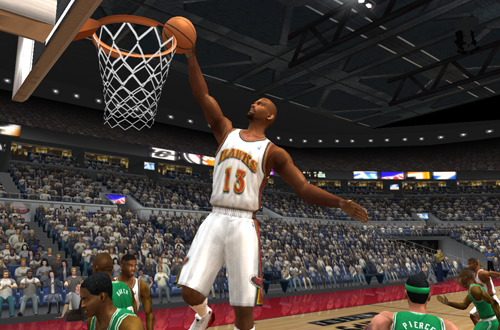 Compared to his son, Glenn Robinson was far less nomadic in his NBA career; at least at first. After sitting out the beginning of his rookie season, the Big Dog spent most of his career with the Milwaukee Bucks, indeed sticking around longer than I sometimes recall. Following a trade to the Atlanta Hawks in 2002, he’d be traded twice more before finishing his career with the San Antonio Spurs, where he won a championship in 2005. Despite sometimes forgetting just when he moved on from the Bucks, it’s always strange to go back to NBA Live 2003 through NBA Live 2005, or other games of that vintage, and see him on the rosters of those other teams. 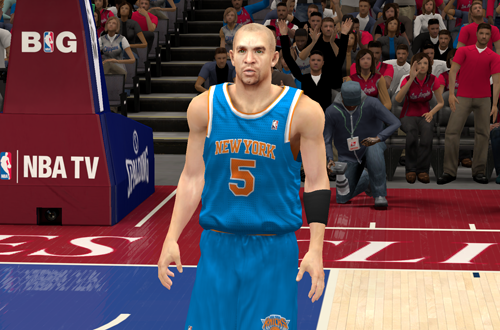 If you were asked to name the teams that Jason Kidd played for, you’d be forgiven for missing one of them. Most fans would recall his tenure with the Nets, where he made two NBA Finals and was in MVP consideration. Dallas is a given as that’s where he began his career, was a co-Rookie of the Year, and later returned for a second stint in which he was a part of the 2011 Championship team. You may even recall that he spent five years in Phoenix. However, it may take dusting off NBA 2K13 for some to remember that he ultimately finished his career with the New York Knicks. His lone season in the Big Apple is undoubtedly a “familiar faces in strange places” scenario. 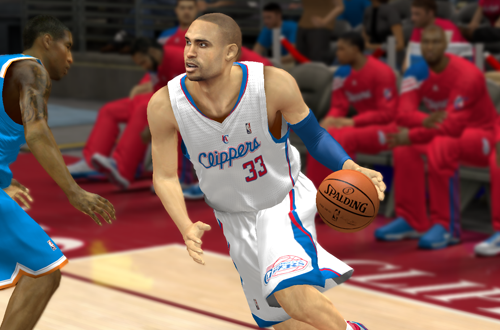 Since I’ve discussed the first two picks in the 1994 NBA Draft, I might as well talk about the third, as Grant Hill is also one of the familiar faces who ended up in strange places. The co-Rookie of the Year with Jason Kidd had established himself as one of the breakout stars of the new generation as the league entered the new millennium. A broken foot resulted in complications that derailed Hill’s career right as he became a big offseason acquisition for the Magic. A career resurgence allowed us to see enough of Hill in Orlando and later Phoenix for those stints to not look so strange, but his final year with the Los Angeles Clippers – as seen in NBA 2K13 – is definitely odd. 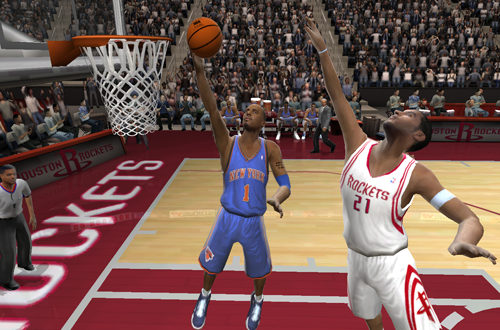 Much like Grant Hill, Anfernee Hardaway was expected to be one of the stars of the 2000s. Injuries began taking their toll on Penny a couple of years before Hill’s career was derailed, though coincidentally, both players appeared in only four games during the 2001 season. Penny had left Orlando for Phoenix a year earlier, and like Hill, the sight of him in a Suns jersey eventually seemed normal. His later tenure with the New York Knicks – officially represented in 2005 and 2006 season titles – is still weird to look back on, though. The same goes for his brief comeback with the Heat in 2007, though I can’t recall if his Miami stint was ever officially reflected in roster updates. 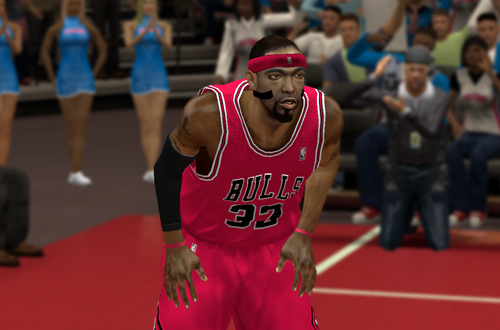 Let’s wrap up with a good old fashioned example of a veteran moving on to a new team at the end of their career. Richard Hamilton spent his first three seasons with Washington, including a year as Michael Jordan’s teammate. He’s best remembered for his nine seasons with the Pistons of course, which included a championship in 2004 and Finals appearance in 2005. As the Pistons slipped from contention and his role diminished, Hamilton elected to sign with the Chicago Bulls. You’ll find him in their starting lineup in NBA 2K12 (assuming you have the official roster update), as well as NBA 2K13. On a personal note, I liked the signing, but it came way too late.

Which of these examples of familiar faces in strange places do you recall? Did you put them to good use on the virtual hardwood? Let me know in the comments! As I’ve said before, there’s a fascination in seeing familiar faces in strange places, though it’s a bitter pill to swallow if it’s one of your favourites moving on to a team you’d rather not cheer for, or a player you dislike signing with your favourite team. The scenarios they created on the virtual hardwood can be interesting, and often pan out better than in real life. While mods and retro teams capture these stints, it’s always fun to go back to the original games, and see that odd and sometimes forgotten history come to life.