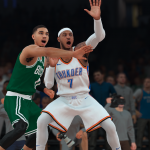 This is Wayback Wednesday, your midweek blast from the past! From retrospectives of basketball games and their interesting features, to republished articles and looking at NBA history through the lens of the virtual hardwood, Wednesdays at the NLSC are for going back in time. This week, I’m taking a look back at another ten players that ended up as familiar faces in strange places.

Yes, we’re reached the seventh instalment of this series! For the record, while this may not be the last time I cover this topic in Wayback Wednesday, it’s the final list that I’ve had planned. I’m sure there are other examples that I’ll find when I revisit classic games, and of course over time, new games will grow old and more players will end up becoming familiar faces in strange places. If there are any noteworthy examples that I haven’t covered in these seven articles, feel free to let me know. A Part 8 may be in order at some point!

For those who may be unfamiliar with this topic, I’m taking a look back at the unusual stints of players who are generally associated with a specific team. They’re the stints that are often forgotten, or in some cases, ones that we tried to forget because of how lacklustre they were, or how wrong it felt to see a player in a different jersey. I’m looking at them through the lens of basketball video games, as we’ll often see these familiar faces in strange places when we fire up older titles and browse the rosters. To that end, I’ve mostly tried to focus on stints that have been officially represented in games, at launch or in official roster updates. Let’s take a look back…way back… 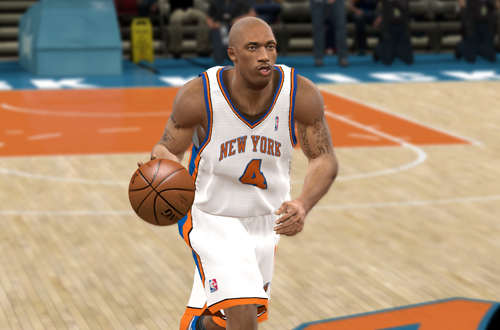 Before his six and a half seasons in Detroit that made him an All-Star, champion, and Finals MVP, Chauncey Billups was traded three times – including halfway through his rookie season – and also moved on once via free agency. Not unlike Moses Malone, he actually played less than half of his career for the team he’s most associated with; in fact, both had single season returns making them a familiar face back in a familiar place! Of course, even with nomadic players, some stints make them familiar faces in strange places. For Billups, I’d suggest that it’s his short tenure as a Knick after he was included in the Carmelo Anthony trade, as seen in roster updates for NBA 2K11. 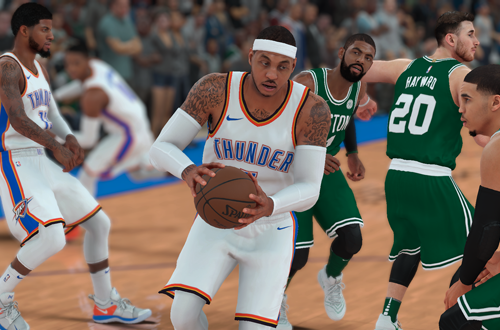 Speaking of Carmelo Anthony, he’s bounced around somewhat after finally waiving his “no trade” clause to leave New York in 2017. With that in mind, we could cite all of those stints as examples. However, when it comes to players who became familiar faces in strange places, the best examples tend to be the stints that are forgotten, felt the most shocking when they happened, and were ones we never really got used to. To that end, I’d nominate Melo’s time with the Thunder and the Rockets as the most unusual stints of his career; especially as his Games Started streak ended in Houston. They’re preserved in NBA Live 18, NBA 2K18, NBA Live 19, and NBA 2K19. 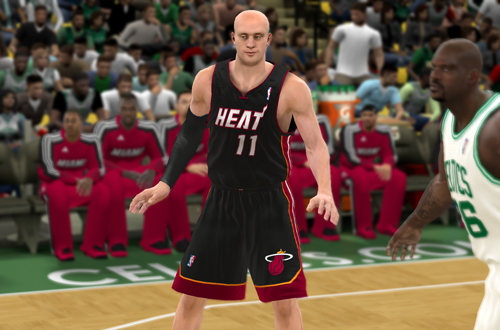 Only LeBron James has appeared in more games for the Cleveland Cavaliers than Zydrunas Ilgauskas, and only then because LeBron became a familiar face back in a familiar place in 2014. Ilgauskas himself briefly left the Cavs in 2010 as part of the trade that brought in Antawn Jamison from the Wizards, but he sat out for 30 days after Washington released him, and then returned to the Cavs. When LeBron took his talents to South Beach that offseason, Big Z ended up following him. Although we’ve become used to seeing LeBron switch jerseys, it was the only time we saw his long-time teammate play for another NBA club. NBA 2K11 includes Big Z’s Heat stint. 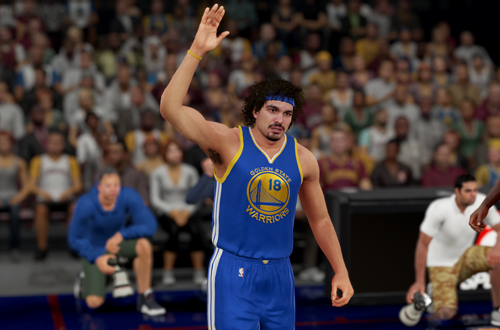 During the 2007 offseason, Anderson Varejao grabbed headlines by declining to re-sign with Cleveland as a restricted free agent. This led to him being removed from the Cavs in roster updates for NBA Live 08, only to be added again in a further update when they matched the Bobcats’ offer. His career took another interesting turn when the Cavs traded him to Portland and he ended up with the Warriors – whom the Cavs had faced in the 2015 NBA Finals, and would go on to face again in 2016 – a move that was reflected in NBA Live 16 and NBA 2K16. Varejao declined a ring after the Cavs came back from 3-1, but accepted one in 2017 despite being cut by the Warriors. 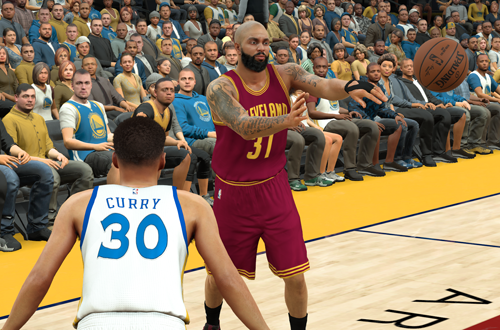 Much has been said about superteams in recent years, and during the last couple of NBA Finals series between the Golden State Warriors and Cleveland Cavaliers, it did feel as though both teams were trying to stack their rosters with talented players who sought an opportunity to win a ring. In all fairness, some of those players had name recognition, but were definitely past their prime. Some might include Deron Williams on that list, but he was only in his early 30s, and not far removed from putting up decent numbers for the Nets. Not only was it strange to see Williams in a Cavs jersey – in NBA 2K17 and in real life – but it also heralded an abrupt end to his NBA career. 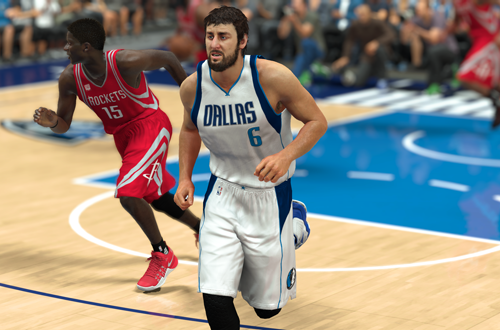 I’m not sure which of these stints was the weirdest of Andrew Bogut’s career. They’re all indications of a player who almost overnight went from being a key player on a championship team to a veteran journeyman struggling to stay in the league. In fact, his Cavaliers tenure was so short that if you didn’t play NBA 2K17 between March 2nd and March 13th 2017, or didn’t save a copy of the official rosters during that stretch, you may have missed it completely on the virtual hardwood. His time with the Mavericks was represented in earlier rosters though, and his half season with the Los Angeles Lakers could be seen in NBA Live 18 and NBA 2K18, prior to his release. 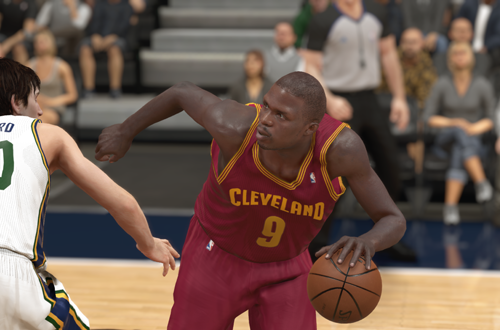 Should the Bulls have traded away Luol Deng? In hindsight, it seems like another knee-jerk move by the front office duo of John Paxson and Gar Forman, though the emergence of Jimmy Butler and Derrick Rose’s second knee injury did cast doubt upon the team’s direction. What’s done is done though, and it resulted in Deng going to Cleveland, a move reflected in roster updates for NBA 2K14 and NBA Live 14. After a couple of productive years replacing LeBron James in Miami, Deng’s career did suffer a sharp decline. It’s strange as it seems like he could still be playing today, so I’m not about to give GarPax credit for opting to trade him away back in 2014. 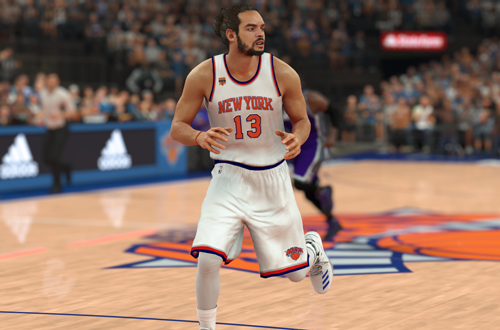 While Joakim Noah wasn’t traded like Deng or Derrick Rose – his fellow cornerstones of the Bulls’ resurgence in the 2010s – he did leave Chicago with little fanfare to join Rose in New York. I do have to give GarPax some credit here, as Noah was banged up by that point, and his huge deal did turn out to be a blunder for the Knicks. It didn’t mean that it wasn’t strange to see him in the Knicks’ orange and blue in NBA 2K17, after wearing the Bulls’ black and red for so many years (and in so many video games, too). His brief stints with the Grizzlies and Clippers were likewise strange to witness, especially as he wore #55 rather than #13. At least he’s a Bulls ambassador now. 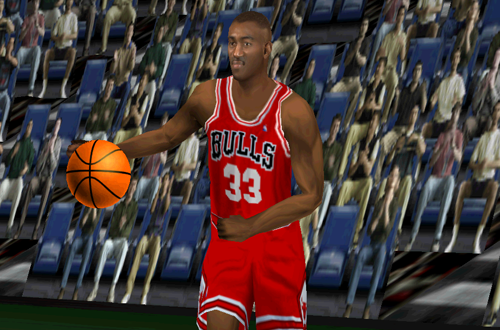 I’ll always associate Hersey Hawkins with the Seattle SuperSonics, as they’re the team he was playing for when I really got into basketball and basketball gaming. Obviously he made the NBA Finals with them as well, though he was a one-time All-Star with the 76ers. As such, if you associate him with the Sixers or even the Hornets where he later became a familiar face back in a familiar place, I’d understand. I doubt that many fans associate him with the Bulls though, or remember that he played a year for them. The 2000 season games are there to remind us though, with NBA Live 2000 being a memorable example due to him wearing Scottie Pippen’s #33 in the default roster. 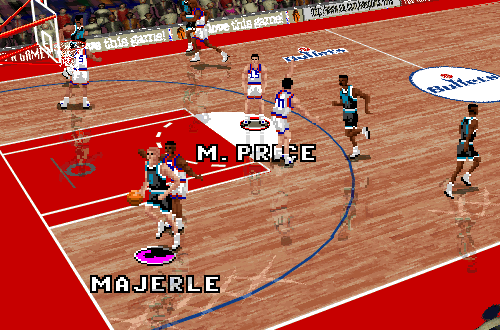 I’ve often associated both Dan Majerle and John “Hot Rod” Williams with the Suns in the 90s. While there’s a reason for that – they both played for the Suns in the 90s – I’ve erroneously recalled an overlap in their stints. That never happened, as the two were in fact traded for each other in 1995. This resulted in Majerle playing one year for the Cleveland Cavaliers, which can be seen in NBA Live 96 PC, and other 1996 season titles with updated rosters. It’s very easy to overlook that stint, as he spent most of his career with the Suns and Heat, making it far more likely that you’ll remember him wearing those jerseys. It was a year of obscurity after his All-Star season in 1995.

Once again, that brings an end to the Familiar Faces in Strange Places series, at least for now. Obviously there are more examples we could name, and new players will join that club in the future, so there may be further articles at some point. For now, I’ve tried to focus on noteworthy names and interesting stories, as well as stints that made official appearances in games. I love the interactive almanac aspect of retro basketball gaming and the trivia it produces, and I hope that you’ve enjoyed looking back with me. As I said, hit me up with any further examples I may have missed, and I’ll keep them in mind if I pick up this series again sometime for an eighth instalment.