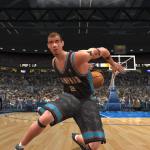 This is Wayback Wednesday, your midweek blast from the past! In this feature, we dig into the archives, look back at the history of basketball gaming, and indulge in some nostalgia. Check in every Wednesday for retrospectives and other features on older versions of NBA Live, NBA 2K, and old school basketball video games in general. You’ll also find old NLSC editorials re-published with added commentary, and other flashback content. This week, I’m taking a look back at Freestyle Control in NBA Live 2003.

It’s funny that it’s taken me this long to do a Wayback Wednesday feature on Freestyle Control, especially since I talked about Freestyle Superstars just a few weeks ago. I did talk about it in my retrospective of NBA Live 2003, but being such an important development in terms of controls, it definitely deserves its own article. Although the name has changed a couple of times over the years, taking on monikers such as “Quick Strike Ballhandling” and “Quick Strike Ankle Breakers”, the basic concept of Freestyle’s right stick control has remained essentially the same. It’s since gone back to its original name, and we’ll be seeing more of it in NBA Live 18.

Freestyle Control changed the game, and for those of us playing on PC, it also meant picking up a dual analog gamepad to take full advantage of it. Let’s take a look back…way back…

The blurb on the back of the NBA Live 2003 box boldly describes Freestyle Control as “revolutionary”. While that’s usually the kind of marketing that makes basketball gamers roll their eyes, in this case, EA Sports were on the mark. As the NBA Live 2003 preview season was getting underway, there were rumours that the game was going to make use of dual analog sticks. I remember one rumour suggesting that the sticks would control the left and right hands, and while that wasn’t the case, it was on the right track. As it turned out, the left stick controlled player movement, while the right stick provided comprehensive control over dribbling and other moves. Although we’d had crossover and spin moves since NBA Live 98, the controls were quite limited. Even with the addition of new animations as the years went by, we were at the mercy of contextually-based moves that weren’t always appropriate. There were times when you pressed the Spin or Crossover buttons, and simply hoped for the best. With Freestyle Control, it was now possible to perform the exact move you wanted. Whether it was a crossover, behind-the-back dribble, hesitation, step-back, or even fakes in the triple threat position, it was just a matter of making the appropriate movement with the right analog stick.

What made Freestyle so easy and effective was its intuitive approach to player control. If the ball was in a player’s right hand, moving the stick to the left performed a crossover to their left hand, and vice versa. Moving it towards the hand with the ball performed a hesitation dribble. Up and down on the stick was used for momentum-based moves, such as spins and step-backs. Rotations of the stick and angled movements would perform more complex moves, such as behind-the-back dribbles. Jabs and ball fakes could be performed when posting up or in the triple threat position. Ratings determined some of the specific animations.

The benefits of Freestyle Control were immediately apparent. There’s a reason that NBA Live has stuck with the same basic concept for dribbling controls for several generations now. For all the ups and downs in other aspects of the game’s mechanics and features, NBA Live’s general approach to dribbling controls has always been one of its strong points. It’s very telling that NBA 2K eventually incorporated right stick controls into Isomotion, with some elements that are very similar to Freestyle Control. It was less clunky than holding a trigger and moving the left stick, and far better than the old school approach of contextual buttons.

However, that first incarnation of Freestyle Control did have its problems. In short, it was too powerful. Although the new right stick controls included defensive moves, such as the ability to steal with the player’s left or right hand, raise the player’s arms to challenge a shot, and easily transition into a defensive stance, there was a lack of balance. Offensive moves were unquestionably more powerful, so it was far too easy to get to the hoop. Step-backs were also rather cheesy. Instead of just being an effective tactic to create space for a shot, in NBA Live 2003 they artificially boosted three-point success – even for players like Shaq – and thus became an exploit. This contributed to the fast-paced, arcade feel of NBA Live 2003. While that could make for some fun, action-packed gameplay, it was generally disappointing for anyone who wanted a more realistic experience. The inclination was to blame Freestyle Control for this direction, but as NBA Live 2004 would prove the very next year, the concept was well-suited to a more sim-oriented approach. With more balanced gameplay, along with the newly added sliders that allowed further tweaks to the experience, it was clear that Freestyle Control wasn’t actually a barrier to NBA Live’s efforts to strive for more realism.

Although right stick controls are generally thought of in terms of offensive moves, the enhancements they’ve provided to the defensive side of basketball games are often understated. As noted, the introduction of Freestyle Control allowed gamers to choose whether they wanted to perform a steal with the left or right hand, in order to try and avoid reach-in fouls. The ability to challenge shots and achieve better positioning with movement of the right stick has been a factor in defensive controls having more of an impact. Even if the first incarnation of Freestyle Control seemed more about breaking ankles, the concepts it introduced ultimately had benefits at both ends of the court.

As I mentioned, the introduction of Freestyle Control had a significant impact on the way that PC gamers played NBA Live. While many gamers had used joysticks and later gamepads to play previous games, the keyboard was still a viable controller option. That was no longer really the case, come NBA Live 2003. Although Freestyle moves could be performed with the keyboard, the depth of control was very limited compared to what could be done with a dual analog gamepad. Like a lot of PC basketball gamers, I invested in a dual analog gamepad when NBA Live 2003 came out. Some certainly refused though, leading to frustration with the new controls.

We’re inclined to be sceptical when we see features and gameplay mechanics being given marketable names, especially when they’re described with buzzwords such as “revolutionary”. Once again though, when it comes to Freestyle Control and its introduction in NBA Live 2003, I believe it was a fair and apt description, as well as a catchy name that’s become synonymous with the NBA Live brand. Different elements of player control have come and gone over the years, but right stick dribbling has stood the test of time. It all began with NBA Live 2003, and that first version of Freestyle Control. We’ve been in control on the virtual hardwood ever since.