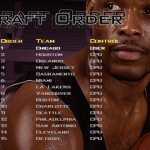 This is Wayback Wednesday, your midweek blast from the past! In this feature, we dig into the archives, look back at the history of basketball gaming, and indulge in some nostalgia. Check in every Wednesday for retrospectives and other features on older versions of NBA Live, NBA 2K, and old school basketball video games in general. You’ll also find old NLSC editorials re-published with added commentary, and other flashback content. This week, I’m taking a look back at GM Mode in NBA Live 98.

Although I’ve gravitated towards MyCAREER and 2K Pro-Am in recent years, I’ve traditionally been a franchise gamer. For those of us who remember playing basketball games with a single season mode, the ability to play multiple seasons while managing our roster through the Draft, free agency, and salary cap-restricted trades was something that we eagerly wanted to see. As basketball gaming approached the turn of the millennium, the demand for an in-depth, multi-season mode – what we would now refer to as a franchise mode – was steadily rising. Although we’ve come to see fantastic franchise modes, it’s been a long road to get to that point.

Since I’m looking to get back into some franchise gaming this year, it seems as good a time as any to tip off a multi-part feature I’ve been wanting to do for some time: a look back at the history and evolution of franchise modes. First up is NBA Live 98’s GM Mode. While not strictly an in-depth franchise mode, it stands as one of the forerunners to the concept. Let’s take a look back…way back…

As I mentioned, in the early days of sim basketball games, the deepest mode available was Season play. The early NBA Live titles provided gamers with an opportunity to play through either a full length or abbreviated NBA season, which included the All-Star Game and Playoffs. There were basic roster management functions, and as the years progressed, features such as the end of year awards were added. It may not sound like much, but it’s all we had at the time, and we still enjoyed it. You also have to remember that only a few years prior, the modes were even shallower, and in the case of EA’s NBA Playoffs series, only sixteen NBA teams were featured. Of course, after a few years, Season mode was definitely beginning to get a little stale. Glance at the NBA Live 98 Wishlist that Tim, Lutz, and Brien compiled for the NLSC back in February 1997, and you’ll see that basketball gamers were already expressing their interest in a mode that offered multi-season play, with elements such as the NBA Draft, salary cap, and player movement between CPU-controlled teams. It would be a couple of years before that dream would be realised, but the PC version of NBA Live 98 did introduce a new mode that was available alongside the traditional Season and Playoffs modes: GM Mode.

According to NBA Live 98’s features list, GM Mode allowed gamers to “choose franchises, draft players, and play custom seasons”. While that is technically true, it arguably suggests a deeper experience than what is actually on offer. The use of the term “draft” and the plural “seasons” is perhaps a little misleading. GM Mode does not feature multi-season play, and as such, there are no new rookies – generated or otherwise – nor is there the NBA Draft. There aren’t too many roster management options that aren’t available in the regular Season mode, though there are a few customisation options that allow you to create a different experience.

In short, GM Mode was basically a fantasy draft season mode, with a few ways of changing up the league. Upon starting a new game, you were presented with the option of adding the teams you wanted to play with and against into the four Divisions, or you could choose the NBA preset if you wanted to feature all 29 teams as normal. You could select the season length, turn injuries and the trade deadline on and off, and enable the option of overriding declined trades. The fantasy draft feature itself was actually also optional. If chosen, you could either randomise or manually set the draft order before making selections for your chosen team(s).

After choosing your settings and drafting your players (if necessary), you proceeded to the schedule as in the normal Season mode. The usual roster management functions are available if you’d like to make further changes to your lineup. In the event of a fantasy draft, the players who went undrafted could be found in the Free Agent Pool. Since the fantasy draft was only twelve rounds, this provided an opportunity to fill out the final three slots on your roster. You could even create players, or edit existing ones. The latter could be a bit of a cheat, since you were actually able to modify your player’s ratings. As the season progressed, players were injured. The CPU-controlled teams didn’t trade amongst themselves or sign any free agents, but they did a respectable job of picking their starters during a fantasy draft. When it came to the bench players however, they tended to draft by Overall Rating – which was visible in-game for the first time in the NBA Live series – and ended up a bit too stacked at a certain position as a result. The CPU also rejected unfair trades, though if you’d enabled the override option, that wasn’t an issue. Once the regular season had concluded, it was off to the Playoffs. When the NBA Finals had been decided, the season award winners were displayed, and you were sent back to the main menu.

It may sound a little pointless now, especially since beyond the league customisation options and fantasy draft, it’s essentially just Season mode. However, GM Mode was ultimately an important addition for NBA Live. A lot of the customisation options would be added to Season mode in subsequent games, and it marked an effort to provide a different experience to the established style of season play. The concept of CPU-controlled teams accepting or rejecting trades – unique to GM Mode in NBA Live 98 – obviously became an important mechanic in later franchise modes. There wasn’t a salary cap to restrict deals, but it was a first step.

Indeed, GM Mode was the first step towards the fully-fledged franchise modes that we strongly desired, and have since come to enjoy. Even though it was basically a slightly more customisable version of the single Season mode we were already familiar with and had grown bored of, it did offer a chance to change things up. More importantly, it was a means of testing out concepts and technology that would become vital components in future games, such as team building AI, recognition and evaluation of player value, and league customisation. While it may not resemble its successors, GM Mode was, in its own way, NBA Live’s first franchise mode.

GM Mode may be difficult to appreciate these days, especially with the strides its immediate successors made, to say nothing of what we have now. Even at the time, it’s probably safe to say that there were some gamers who were left a little disappointed that there wasn’t more to GM Mode. It did signify progress however, and was a sign of things to come. These days, we’ve come to expect deep modes, and the bar is set very high for any new mode that’s making its debut. Back in 1997, though, GM Mode offered something new on top of the familiar Season experience. It was a solid addition, setting the table for franchise gaming to become a reality.

Few days ago Istarted to play (using fantasy draft) GM in Live 98 after all this years and I’m pretty sure that this mode will be a next arcticle in Wayback Wednesday and there it is.
Of course it wasn’t a good mode, like you mentioned it a slightly extended “Season” mode, but this build the foundations for future versions. Also I need to say that I’ve got pretty strange thing, I always have Joe Dumars in GM menu, no matter what I do I can’t get any other player.

That is a strange issue, haven’t run into that one myself. Do you edit the draft order at all?

That’d be why, then. The AI tends to draft on Overall Rating, so he’s probably consistently the player left at the fifteenth pick.

I think we probably misunderstood each other, I mean from all 5 menus in game (with Hardaway, Grandma, Laettner, Richmond) in GM Mode I’ve got only Dumars. 🙂 Anyway I have a lot of fun playing this even If I prefer to play with real roster and then making a trades. My squad is better than I’m thought.
I also forgot to mention that I’m playing on 97/98 Tim and Lutz roster.

Some great mods for NBA Live 98 back in the day. Tim, Lutz, and Brien certainly encouraged me to get back into the hobby. I was glad to be able to dig up some old releases in the archives and re-upload them a couple of months back.