In the early days of basketball games, it wasn’t unusual for games to have different cover players and artwork, or even titles, depending on the region and/or platform. A prominent example that I’ve previously mentioned is the original NBA ShootOut for PlayStation, released as Total NBA ’96 in PAL regions. NBA ShootOut features Sam Cassell on its cover, while Total NBA ’96 simply has a rendering of a generic player. Similarly, the cover of Total NBA ’97 displays the title on a basketball texture, while NBA ShootOut ’97’s cover features Eddie Jones. It wasn’t until NBA ShootOut 98 and Total NBA 98 that both versions had similar artwork, featuring Hakeem Olajuwon. Series such as NBA Live tended to be uniform in their covers. While NBA Live 96 featured Shaquille O’Neal on the PC and PlayStation covers, and a shot from the 1995 Finals on the Super Nintendo and SEGA Genesis covers, those designs were standard for both North American and international releases. The only variations in cover art came between platforms or when games were repackaged as classics, and with the latter, the featured players didn’t change. NBA Live 2001 saw the first international cover player, with Arvydas Sabonis appearing on the Lithuanian release. It’s a cover that many people, me included until it was pointed out, tend to be unaware of.

Similarly, there was a Japanese version of NBA Live 2002 featuring Michael Jordan on the cover, wearing his new Washington Wizards jersey. When I found it on eBay, I originally thought that it was a bootleg, but it does seem to be the official cover. I’m not sure of the actual licensing arrangement there, but someone who worked on the game could no doubt shed some light on the matter. In any event, it’s odd that Steve Francis was the primary cover player for NBA Live 2002, while MJ was relegated to a regional release. His in-game model was also used on the cover of the Japanese version of NBA Street, rather than the illustration of Stretch Monroe.

Of course, MJ is a somewhat different example of a regional cover, as he obviously doesn’t represent Japan. EA resumed the practice of international cover players with Raul Lopez in NBA Live 2004. The Spanish national team is also unlocked in that release, but is hidden content in other regions. Pau Gasol would replace Lopez on the Spanish cover from NBA Live 2005-10. Tony Parker appeared on the French covers of 2005 and 06, while sharing the 07 and 08 cover with Boris Diaw. 07 had a German cover with Dirk Nowitzki, 08 and 09 an Italian cover with Andrea Bargnani, and Luol Deng graced the covers of NBA Live 08-10 in the United Kingdom. Perhaps the most interesting of all international cover players is Yuta Tabuse, who appeared on the cover of NBA Live 06 in his native Japan. Apparently referred to as “the Michael Jordan of Japan” – oddly appropriate given the regional cover of NBA Live 2002 – he’s the first player from the Land of the Rising Sun to make it to the NBA. That made him a logical choice to appeal to the Japanese market, but Tabuse’s entire NBA career spanned all of four games in the first two months of the 2005 season. He was a free agent in NBA Live 06, making him the first (and so far, only) non-Legend to appear on the cover of a game while not being an active NBA player.

That brings us to the NBA 2K series, which didn’t feature international cover players through the 2000s. 2K is better known for having special edition and multiple primary cover players, but the company has seen fit to appeal to different regions with a few international cover players in the past decade. Ricky Rubio appeared on the Spanish cover of NBA 2K15. NBA 2K16 featured Dennis Schroder, Pau and Marc Gasol, and Tony Parker on the German, Spanish, and French covers respectively. Pau is also on the Spanish NBA 2K17 cover, while Danilo Gallinari features on the Italian release. In NBA 2K19, Ben Simmons graced the first regional cover released in Australia.

Rounding out the list of NBA 2K’s international cover players is DeMar DeRozan, who is from Compton but ended up appearing on the Canadian cover of NBA 2K18 as he was playing for the Toronto Raptors at the time. NBA 2K20 didn’t feature any regional covers, suggesting that the practice may be going out of style. With NBA 2K’s global popularity and market strength, appealing to regional markets with local players is perhaps no longer seen as being necessary. As NBA 2K19’s use of Giannis Antetokounmpo also demonstrates, international players are now just as likely to grace the primary cover, given their popularity and standing in the league. With that in mind, it’s questionable as to how successful international cover players were at generating sales in their respective regions. Anyone who had interest in an NBA video game was likely going to consider buying those titles anyway. However, it’s likely that they at least added some appeal and generated goodwill and excitement by making gamers in those regions feel seen. I’ll admit that I thought it was cool that Australia finally got a regional cover with NBA 2K19, and I’m sure that other gamers outside the United States felt the same way about their covers. Any additional sales they wouldn’t have received otherwise were likely just a drop in the bucket, though.

If anything, they might have picked up additional value as collector’s items on the second hand market. I felt compelled to pick up the Japanese version of NBA Live 2002 when I saw it on eBay for a decent price, and more recently I snagged a copy of the UK version of NBA Live 09 on PlayStation 3, featuring Luol Deng on the cover. I wouldn’t mind collecting some of the other international releases, though they tend to go for a lot more than I’m willing to pay for a game that I already own. Of course, if money were no concern, then I’d be far more inclined to pick them up. They would undoubtedly be great additions to the collection, especially a rarity like Yuta Tabuse!

Looking back, the concept of international cover players has led to some interesting choices and unique situations. From Japan being the only region to get the Michael Jordan cover for NBA Live 2002 and Yuta Tabuse being featured on NBA Live 06, to players like Pau Gasol and Tony Parker becoming multi-time cover players in their home countries, attempts to appeal to different local markets have resulted in an array of alternative covers, and subsequently, appealing collectables. The games behind those international covers may be identical – language aside, of course – but the sight of a familiar game with unfamiliar branding will always be an interesting image.

NOTE: This article has been updated from its original version to include information about the Lithuanian release of NBA Live 2001. Thanks to ManasGaming for the heads up!

I’ve never seen an alternate cover for NBA Live 2001. KG is the only official cover player as far as I know and can find online.

I’ve seen some copies in flea market some years ago and as much I known it was intended for the Lithuanian market. I find picture of the cover. Here is the link: 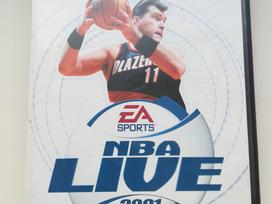 Interesting! Appreciate the heads up. That one definitely wasn’t widely talked about.

I’ve gone ahead and amended the article, giving you credit for the information. Thanks again!

I remember here in Poland among of standrad cover of Live 10 you can also spot an UK one on store shelves.

Apparently it made its way to Australia as well, though the standard Dwight Howard cover was more interesting.