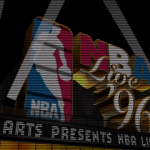 This is Wayback Wednesday, your midweek blast from the past! In this feature, we dig into the archives, look back at the history of basketball gaming, and indulge in some nostalgia. Check in every Wednesday for retrospectives and other features on older versions of NBA Live, NBA 2K, and old school basketball video games in general. You’ll also find old NLSC editorials re-published with added commentary, and other flashback content. This week, I’m taking a look back at the introduction videos that were featured in old school basketball video games.

I’ve been producing Wayback Wednesday as a weekly feature since November 2015, and yet somehow, I’ve never discussed the introduction videos that were featured in old basketball games. I’ve talked about music, and I even posted a breakdown of NBA 2K12’s introduction video with comparisons to the real highlight clips, but I’ve yet to profile the intros that greeted us upon firing up some of our old favourites, despite the fact it’s a very obvious choice of topic for a Wayback Wednesday feature. Well, better late than never, right?

Lengthy introduction videos are seemingly being phased out, but you certainly don’t have to be a grizzled basketball gamer in your 30s to remember them. However, there was something special about the intros in old school basketball games. If you watch them today, you might just feel pumped up to play those old titles again, just as you were all those years ago. Let’s take a look back…way back…

When I talk about old school introduction videos in basketball games, I’m referring to the ones that feature real footage of NBA players. A lot of older releases have some kind of brief intro that leads up to the title screen or main menu, but when CD-ROM drives and disc-based consoles became common in the mid 90s, developers made use of the extra space the medium provided to treat gamers to an extended intro featuring a reel of NBA highlights from the previous season. It was a gimmick that was rather popular at the time, and the graphics of the games had no way of living up to actual footage of NBA players, but those intros were nevertheless fun to watch.

Even when you’d seen an introduction video hundreds of times, it still got you in the mood to play the game. Everything about them was done superbly, as the intro for NBA Live 95 demonstrates. The clips are well-chosen, and cut together just right. The music is up-tempo, the visual effects creative and exciting. It didn’t matter that the graphics didn’t come close to replicating those highlight reels. You wanted to take control of your favourite team and players, and create some highlights of your own on the virtual hardwood. Sure, you might skip the intro if you were in a hurry, but I think it’s fair to say that many of us watched them in their entirety, over and over again.

Watching the introduction video and seeing which clips made it to the reel was part of picking up the latest version of NBA Live on PC (or PlayStation). I remember looking out for any snippets of Michael Jordan, wondering if EA Sports would sneak a couple of clips of him into the intro despite not being able to include him in the game due to licensing issues. Of course they didn’t – they couldn’t feature him in any form, aside from the infamous Roster Players – but it was a fun exercise. There’s a clip of Scottie Pippen dunking in the NBA Live 98 intro where the other players are blurred out, and I have to believe that the choice of effect on that particular clip was no coincidence.

Another recurring feature of the early intro videos for NBA Live is the mention of Virtual Stadium Technology. The tech was used from NBA Live 96 through NBA Live 98 for the environments, and while these days the name sounds better than the games look, I liked how it was featured in the intros. It was cool to see the rendering of the EA Sports court, particularly in NBA Live 96 and NBA Live 97‘s videos. The way that the court materialises from the ground up in the NBA Live 97 intro is, in my opinion, a very cool effect. Once again, it arguably promised more than the gameplay was capable of delivering, but you still got hyped up watching it.

After all these years, I would have to say that the NBA Live 96 and NBA Live 2000 introduction videos are my favourites when it comes to the old school approach. The fact that they’re two of my all-time favourite titles in the NBA Live series is a factor here, but I also feel they’re two of the best videos. I love the jazzy tune and spotlight effects on the NBA Live 96 logo, and how they make the intro feel timeless. It’s also cool that the later release of NBA Live 96 allowed the inclusion of some Vancouver Grizzlies and Toronto Raptors footage. “Shakn’ The Floor” is also a great basketball anthem, the perfect backing to an excellent assortment of late 90s highlights.

NBA Live 2001 heralded some changes for the series including a revamped dev team, and arguably, the game’s intro illustrated the new direction. The NBA highlights were gone, instead replaced by clips of Montell Jordan singing the game’s title track, a few behind the scenes clips of cover player Kevin Garnett performing motion capture, and in-game footage. From that point onwards, NBA Live’s introduction videos would all feature highlight reels comprised entirely of gameplay mixes. It was a logical step as the graphics were improving and it made sense to spotlight them rather than real NBA highlights, though I recall quite a few people stating a preference for the old approach.

Of course, the cartridge-based versions of NBA Live didn’t have the space to include full motion video, and thus featured their own introductions created from in-game assets. Interestingly, the first NBA 2K game utilised gameplay footage in its intro, switched to real clips in subsequent releases, and then returned to gameplay-based mixes during the last generation. Conversely, NBA Live began moving away from the concept entirely. The prior gen version of NBA Live 08 featured no introduction at all while the current gen version featured an extended attract mode video that played if the game was left idle on the title screen.

The old school introduction videos certainly seem like a thing of the past, and even the newer approach of gameplay mixes appears to be on the way out. After Shady’s fantastic introduction for NBA 2K17, neither NBA 2K18 nor NBA 2K18 feature an intro. Likewise, NBA Live has opted for shorter intros that blend into the title screen, suggesting that the original concept has become outdated. Presumably, the videos have become something that modern basketball gamers are inclined to skip more often than not, making them a waste of space and resources. In all fairness, I can’t say that the absence of introduction videos has ruined newer titles.

At the same time, I do miss them. Whether it’s the old school approach of real NBA clips or the more modern concept of mixes that spotlight the gameplay, their presence did add something extra to the experience. I think most of us would agree that they did genuinely get us pumped up to play, setting the mood for a session on the virtual hardwood. There’s a lot of nostalgia and real enjoyment in the introduction videos. It’d be awesome to see them return, perhaps featuring NBA clips and gameplay footage side by side as real highlights are re-created in the game. Should they remain a thing of the past, however, they’re a fun reminder of fond memories with old favourites.

I miss old intros based on real highlights, but in current era of youtube where you can find thousand of similair movies I don’t know if someone will be impressed if EA or 2k go back to that idea. Either way my favourite intro from that time wasn’t from NBA Live, but from NHL 2000. Damn I love it to this day, Push It by Garbage in the background, guy pushed into bench when Shirley says “Push it” or guy smashed on the glass when “My head explode” was singing. Brilliant.

Definitely. I am surprised that 2K has dropped the gameplay-based ones though, especially after the very positive response to the one for NBA 2K17 that Shady put together.