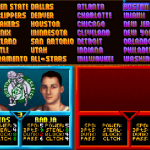 This is Wayback Wednesday, your midweek blast from the past! In this feature, we dig into the archives, look back at the history of basketball gaming, and indulge in some nostalgia. Check in every Wednesday for retrospectives and other features on older versions of NBA Live, NBA 2K, and old school basketball video games in general. You’ll also find old NLSC editorials re-published with added commentary, and other flashback content. This week, I’m taking a look back at the ratings in classic NBA Jam games, specifically the PC version of NBA Jam Tournament Edition.

While playing College Slam for last week’s Wayback Wednesday feature, I noticed something interesting about the individual player ratings. Since the generic players can be edited, there is a cap on their ratings to prevent you from maxing them out at nine in each category. Interestingly, the cap varies from player to player, which basically ensures that at least one player stands out as the star of the team with better all around ratings or high ratings in a few categories, while other players are capped at a lower amount of ratings points, establishing a hierarchy and balancing the squads.

Thinking back to some of the unusual ratings that I’ve noticed in the original NBA Jam games, I began to wonder if a similar approach had been taken in those titles, and whether it could account for some of the ratings that seemed too high or too low. I fired up the PC version of NBA Jam Tournament Edition to make a few calculations and comparisons, and what I discovered was quite interesting. There does seem to be a method to the ratings, and I’m not sure if it’s ever really been explored, so let’s take a look back…way back…

First, let’s take a look at some of the player ratings in College Slam. The ratings caps are divided loosely into a few tiers, with the best players having a maximum number of points ranging from around 46 all the way up to 60 out of the 72 points that would be mathematically possible with eight categories and a top rating of nine. The second tier of players tend to max out at a total of 35-45 points, while the third tier generally ranges from 28-34. Interestingly, not all players are using all of the points available to them, with Florida’s shooting guard using only 21 points out of a possible 28. At least a couple of players have a maximum of 60 points, with one only using 57 of them. That’s all well and good for College Slam with its editable player ratings, but is the same formula used in NBA Jam Tournament Edition? It would seem so! If you tally up the total ratings points for each individual player, you’ll find that similar ranges are used, effectively breaking them up into comparable tiers. Depending on whether or not a player is in the appropriate tier, they may end up with too many or too few ratings points to spread around. Although most of the top players are in the highest tier, and a lot of other players are rated accordingly, a few underrated and overrated players have resulted from balancing out the caps and tiers across all the teams.

With that in mind, it’s easy to see how certain individual ratings came to be too high or too low. Take Stacey Augmon: through his early years in the league, The Plastic Man racked up a healthy amount of steals, yet his Steal rating is a rather dismal 3. However, add up all of his ratings, and you’ll get a total of 52, which makes him one of the better overall players in the game. A more appropriate Steal rating would rank him ahead of much better players, and as it stands, he’s already up there with Scottie Pippen and Hakeem Olajuwon, who also have 52 ratings points. Of course, Augmon’s blocking rating is too high, so there is actually room for correction.

It’s a similar situation with players like Juwan Howard and Dino Radja, who have oddly high three-point ratings. Howard is a little overrated with 53 points, but if Radja lacked his high three-point rating, he’d definitely be a tier too low. It’s safe to say that more than a couple of players have fudged ratings to place them in the right tier, and also balance out the team’s abilities. Harold Miner is another overrated player with a total of 53 points, which places him ahead of stars such as the aforementioned Pippen and Olajuwon, and on par with Karl Malone and Derrick Coleman. Miner and a few other players seem to have benefitted from being designated as the team’s star. The highest rated players in the game, unless I’ve overlooked a couple, are Grant Hill and Alonzo Mourning, with totals of 54 and 56 respectively. That would explain why they are the first duo that can be selected on the All-Stars squad that is unlocked upon defeating all 27 NBA teams. Gary Payton is one of the most underrated stars with only 39 ratings points to share around, which accounts for his relatively low Steal and Clutch ratings. John Stockton has 43 points, though it does facilitate 8s and 9s in five categories and fairly accurate ratings across the board. Most of the league’s stars have totals in the mid to high 40s or low 50s, allowing for ratings that are mostly accurate.

Going back to College Slam, the ratings caps have a similar distribution among the fictional players. Some teams may have a lot of players in the mid to high 40s, while others have a couple in the high 30s. A few teams have multiple players in the 50s, while others have none. When you look at how the ratings have been assigned in NBA Jam Tournament Edition, it really does seem as though similar quotas were used to make sure that the teams were balanced, and that players didn’t become overrated or underrated. The results are a little mixed, and there are oddities such as Terry Mills and Oliver Miller having identical ratings, but overall, it didn’t turn out too badly.

Some of the totals do seem a little arbitrary though, and unsuitable when compared to other players. If this was indeed the approach that was taken with ratings, more than a couple of players were assigned to the wrong tier. Alonzo Mourning should not have better ratings than Hakeem Olajuwon, and Nick Anderson should not be the best player on the Magic ahead of Anfernee Hardaway. More of the elite players could stand to be rated in the mid 50s or higher, and there are other players who should be a tier higher or lower. The distribution of total ratings points has led to some weird individual ratings, as well as a few underrated and overrated players in general. Of course, ratings can be tricky. With NBA Jam’s smaller rosters, it’s important to have balance, and ensure that every team is both challenging to play, and a feasible option to play with. If indeed NBA Jam TE’s player ratings were based on quotas and caps – and making the comparison with the ranges and tiers seen in College Slam, it does seem like that was the case – many of the ratings were still OK. Some of the more unusual ones make a lot more sense with those caps in mind, and despite those oddities, I’d say the system worked. Even with a few strange ratings, NBA Jam TE PC was a fantastic release, and remains one of my all-time favourite basketball games.