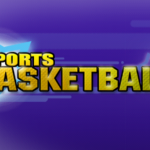 This is Wayback Wednesday, your midweek blast from the past! In this feature, we dig into the archives, look back at the history of basketball gaming, and indulge in some nostalgia. Check in every Wednesday for retrospectives and other features on older versions of NBA Live, NBA 2K, and old school basketball video games in general. You’ll also find old NLSC editorials re-published with added commentary, and other flashback content. This week, I’m taking a look back at Kidz Sports Basketball, specifically the PlayStation 2 version.

There have been a lot of basketball games released over the years, with many of them flying under the radar. We all know NBA Live and NBA 2K, and older basketball gamers may recall other NBA licensed series such as Inside Drive, ShootOut, and In the Zone. Arcade games such as NBA Jam and NBA Street are familiar classics, and in recent years, NBA Playgrounds has gained traction. We remember the College Hoops and March Madness/NCAA Basketball games, EA’s NBA Playoffs series, Double Dribble, and a variety of other hoops titles of varying age and quality.

And then, there’s a title like Kidz Sports Basketball. Released in 2004, it’s not a game that would attract much attention in our community, as we’re not in the demographic. It’s meant for a much younger audience that isn’t quite ready for other hoops games, especially the sim titles. It’s one of those games that you might discover on Wikipedia – or indeed, in our Wiki – and wonder just what it was all about. I snagged a copy of the PS2 version cheap on eBay, so let’s take a look back…way back…

Developed by Data Design Interactive, a British video game developer and publisher, Kidz Sports Basketball is part of the Kidz Sports series that also included hockey, soccer, and golf games. As the name would imply, they’re sports games intended for a younger audience, mostly releasing on PlayStation 2 and Wii. Kidz Sports Basketball also received a PC release a couple of years after the PS2 version came out. All of the games are notorious for being terrible, garnering scores of 1 out of 10 from IGN. You might think that it isn’t worth looking back at such an awful game, but if the Angry Video Game Nerd has taught us anything, it’s that it can be a fascinating exercise. 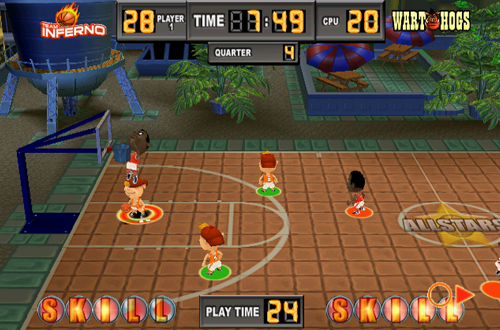 Besides, it’s obviously aimed at kids, so it can’t fairly be held to the same standards as the bigger franchises intended for an older audience. Surely it can’t be that bad, can it? As it turns out, it can, and it is. Even as a game that’s intentionally juvenile and meant to introduce kids to virtual sports, it’s terrible. You don’t have to compare it to NBA 2K, NBA Live, or other more sophisticated basketball games for it to look bad. For what it is, it has very few redeeming qualities, and I can’t imagine young kids could have much more fun with it than I did. Nevertheless, it’s interesting to look back on and see where it went wrong, as it could’ve been a decent release in a niche market.

Let’s dive in. Kidz Sports Basketball features 3-on-3 gameplay, with four abbreviated quarters. There’s a 24-second shot clock – which the game refers to as “play time” – and interestingly, defensive fouls and free throws. Scoring, blocking, and stealing accumulate skill points which can be used to perform special moves. Winning games earns Stars that are used to unlock new courts and teams to use. There are three modes of play: Exhibition (against a random team), Knockout Cup (which is basically a single elimination Playoffs), and Tournament Cup (a round-robin tournament). It’s simple, but that’s how it should be for a basketball game designed for young kids.

At the same time, a mixture of concepts resulted in complexity that I believe would’ve been confusing for children playing the game. Kidz Sports Basketball obviously tried to be an introduction to hoops with the shot clock and fouls, but the game also has an arcade feel. The power-up/special move system added an extra layer to the gameplay that is contrived, even in the hands of an older gamer. On top of that, it’s possible to elude steals by picking up your dribble and leaping out of the way of the defender; in other words, a travel and discontinued dribble. It seems strange to call fouls, but not enforce any other basic rules of basketball, if the aim is to introduce kids to the sport. 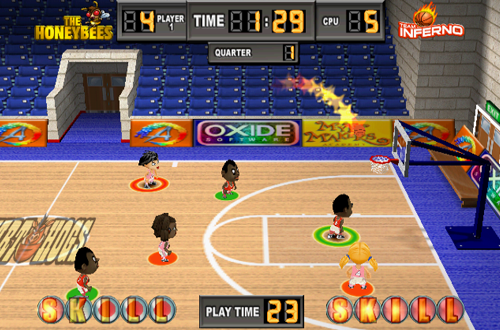 Still, all of that wouldn’t really matter if the gameplay was solid. Unfortunately, it was not. In fact, it’s not even mediocre; it’s one of the worst hoops games that I’ve ever played! To begin with, the pace is extremely slow. There’s no turbo button, so players feel extremely sluggish when they have the ball. The passing mechanics work like a soccer game, which is to say every pass is a loose ball, and if the angle isn’t right, it’ll either be intercepted or sail out of bounds. This makes diagonal passing virtually impossible, and combined with the way the CPU can effortlessly steal the ball upon making contact with a ballhandler, just advancing into the frontcourt is a challenge.

Shooting mechanics are likewise severely flawed. There’s a jump button, and a shoot button. To attempt a jumpshot, you need to press jump and then hit shoot at the right moment, otherwise you’ll attempt a set shot. Of course, there seems to be absolutely no consistency to the ideal release mechanics, making shooting way more difficult than it should be. Fouls seem to happen at random, and heavily favour the CPU. The special moves are extremely limited, and trying to use them to hit a three usually just leaves you open for a steal. It doesn’t seem possible to truly hinder the CPU’s shots, while the broken mechanics make it very easy for them to D you up at the other end.

What this amounts to is a game that is insanely difficult. Even at the normal difficulty level, I feel completely helpless and am constantly blown out. Look, I’ll never claim to be the world’s best basketball gamer, but I’ve been playing hoops games for a long time. I’m proficient enough at them to beat the CPU in sim and arcade games alike, and hold my own in competitive multiplayer. There’s no way I should be struggling this much with a game intended for kids, but the gameplay is just that broken. To that end, I can’t imagine giving this game to young children. I can’t see them having the skill or patience, and if anything, it’s likely to turn them off of basketball for good. 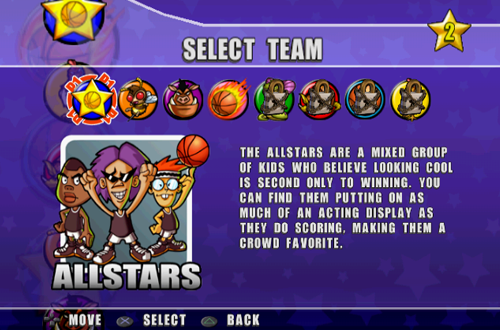 For what it’s worth, there are eight teams to choose from: All Stars, Team Cobra, The Mighty Chickens, Team Inferno, Armadillos, Slam Dunkers, Warthogs, and The Honeybees. They’re cartoony names to go along with the kiddie aesthetic, which is fine, but the description of each team implies they each have a different style or set of skills. This doesn’t seem to be the case, at least as far as I can tell. Speaking of the aesthetic, it’s another aspect of the game that IGN’s review singled out as being awful. It’s certainly pretty bland and uninspired, and undoubtedly kiddie and cartoony, but it’s appropriate for the target audience. Honestly, it’s the least of the game’s problems.

There are other oddities, such as the timer counting up rather than down. Incidentally, you can select quarter lengths of one minute up to five minutes, but there’s no way anyone would be able to stomach this game for more than thirty seconds. There’s an obnoxious announcer that sounds like Wallace Shawn (Vizzini in The Princess Bride, and Rex in Toy Story), especially when he cries out “(Team) are in the lead!” It’s inconceivable that they’d actually get him to provide the voiceover – and indeed he doesn’t – but in any case, the announcer is incredibly annoying. As with the aesthetics though, it pales in comparison to the shoddy gameplay mechanics across the board.

The game is marginally more playable on the easiest difficulty setting, mostly because the AI will fire up bricks from halfcourt and stand back to let you score inside, but it’s still not a lot of fun, and harder than a game for kids should be. If I wanted to give young gamers an introduction to basketball, I’d recommend NBA Jam or NBA Street, or even sim titles like NBA 2K and NBA Live, rather than Kidz Sports Basketball. They’re far easier to pick up, with mechanics that actually work. It’s probably more fun playing with two players, since both sides are affected by the broken mechanics and thus are on a level playing field. Needless to say, that’s hardly a compliment. 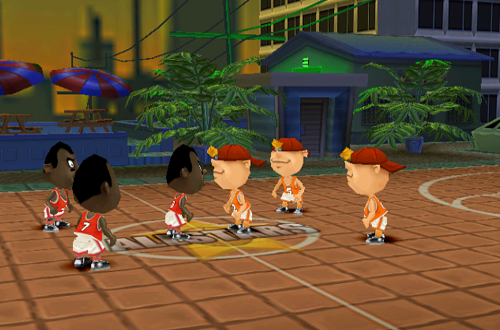 With all that being said, Kidz Sports Basketball isn’t the absolute worst hoops game I’ve ever played, but only thanks to a couple of other truly terrible titles. It’s at least in the bottom five. I’ll be getting to other titles that make that shortlist in due course, but for now, what else can I say about Kidz Sports Basketball? The 1 out of 10 score from IGN is well-deserved and I’m glad I only spent a few bucks on it, as outside of morbid curiosity, it’s no collector’s item. It’s unfortunate, as I do think that there’s a market for basketball games intended for a younger audience. Everyone deserves better than low-budget shovelware though, and that’s exactly what Kidz Sports Basketball was.