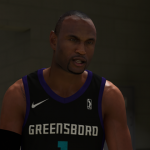 This is Wayback Wednesday, your midweek blast from the past! In this feature, we dig into the archives, look back at the history of basketball gaming, and indulge in some nostalgia. Check in every Wednesday for retrospectives and other features on older versions of NBA Live, NBA 2K, and old school basketball video games in general. You’ll also find old NLSC editorials re-published with added commentary, and other flashback content. This week, I’m taking a look back at the virtual career of Jackson Ellis in NBA 2K, and the legend that it has spawned over six games.

Minor spoiler alert: in NBA 2K19’s MyCAREER mode, Jackson Ellis makes a return to the virtual hardwood. One of the most memorable characters in basketball video games, this year he enjoyed his most prominent role since NBA 2K14, when he was introduced as the rival of your MyPLAYER. Not only has Ellis resonated with NBA 2K gamers, he’s clearly a favourite of the development team as well. Even though he’s only stepped onto the court in a couple of titles, he’s appeared or been referenced in every MyCAREER mode on the current generation.

So what’s the story behind the infamously brash and outspoken Jackson Ellis? Well, the exact story differs for each of us, but in broad strokes, Visual Concepts has been weaving a subplot with Ellis over the past six years. To appreciate the Legend of Jackson Ellis, we need to return to where it all began in the PlayStation 4 and Xbox One version of NBA 2K14. To that end, let’s go back…way back…

We hear about Jackson Ellis early on in the tale, when he’s mentioned by our coach at the Rookie Showcase. We then encounter him shortly afterwards in the tunnel before the game, and our shared history is revealed. As I mentioned, the former UCLA Bruin is our long-time and seemingly inescapable rival. Ellis is extremely talented with an ego to match, and he’s ready to talk some trash. If we remain calm and collected, he sneers at our supposed lack of fire. However, if we respond to him aggressively, he smirks, knowing that he’s just bought some real estate in our head. The prospect of being drafted after him is, needless to say, a bitter pill to swallow. 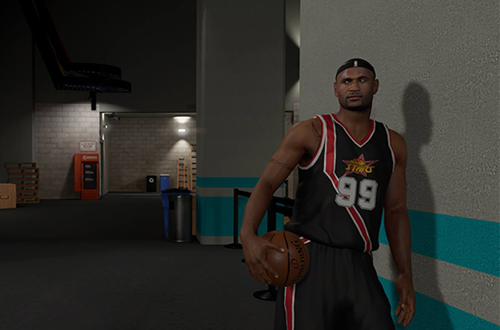 Throughout our rookie season, Ellis is a constant antagonist. Whenever we face him, the gauntlet is being thrown down on some kind of challenge. Who will win the game, who will be the one to score the most points; you name it! Between trading words and trading buckets, the rivalry continues to intensify throughout the year, and doesn’t get any friendlier with endorsements and the Rookie of the Year trophy on the line. If Jackson Ellis falls short of Rookie of the Year honours, he’ll challenge us to a game of one-on-one on a rooftop court. Should we end up winning a championship before he does, however, he’ll offer a truce and an opportunity to join forces as teammates.

Of course, from here on out, there is a lot of speculation and tall tales. Canonically, Jackson Ellis suffered a career-ending injury, a turn of events that was confirmed in NBA 2K19 when Paul Tatum jokes about Ellis’ knee setting off a metal detector. Even in retirement, Ellis found a way of staying close to basketball, getting a job as a shoe rep; a detail also confirmed by NBA 2K19. Unfortunately his brief stint in the pros and unlucky injury did little to change his brash personality, as he often talked down to the players that his company was courting for a shoe deal. Contrary to his assertions, however, he was unable to blackball anyone who stood up to his bullying.

Despite his smug personality – or perhaps because of it – Jackson Ellis remained a well-known figure in NBA circles. His social media feed was often filled with photos of him socialising with NBA players at comic book conventions and other events, and he was known to present players he grew close to with his number ninety-nine jersey; framed and autographed, of course! Soon afterwards, Ellis would become unusually reclusive. A year prior to making a surprising comeback with the Greensboro Swarm of the G-League, he disappeared from the spotlight. Many still mentioned his name though, from NBA veterans to vendors at Fresh Squeezed stands. 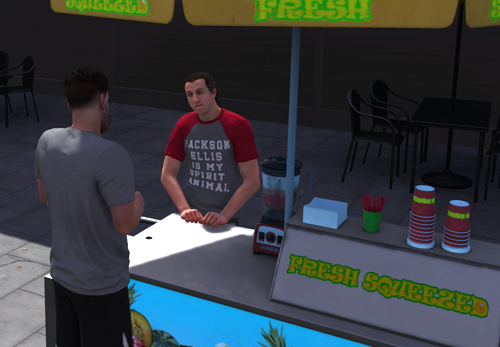 Indeed, an air of mystery has always surrounded Jackson Ellis. What position does he play? How tall is he? Everyone describes Jackson Ellis as being immensely talented, but descriptions of those talents, and most details regarding him, seem to vary wildly depending on the person telling the story. Oddly, outside of the Swarm and UCLA, no one can even agree on which team (or teams) he’s played for. If there wasn’t proof of his existence by way of so many photos and videos, one might even theorise that he’s an urban legend; a cautionary tale for NBA rookies who come in with too much of an ego. In a way, he is just that. He remains a minor leaguer with a major league mouth.

In reality, the variation in Jackson Ellis’ skills and physical attributes is a clever aspect of the player creation mechanics in NBA 2K14’s MyCAREER. No matter the position you choose for your player, Ellis will always play the same position and be suitably sized to do so. That way, he’ll always be around your player’s height, and will always be your matchup on defense. This is achieved by including five different instances of Ellis in the roster – one for each position – and loading the appropriate one after the user has finished creating their MyPLAYER. As such, the story can’t be broken, and seamlessly adjusts to the user’s choices upon starting a new game.

These multiple instances of Jackson Ellis (The Jackson Five, if you will) can also be found hidden in the roster of NBA 2K14 PC, despite the game being a prior gen port featuring the old MyCAREER mode. Although the data is the same as on PS4/X1, and the announcers call his name, they all use a generic face that doesn’t resemble Will Blagrove, the actor who lends both his likeness and voice to the character. Those players – complete and unlockable via RED MC – may indicate that at one point, the character was intended to play a role in the prior gen version of MyCAREER. On the other hand, they may simply be an Easter egg, or a by-product of the roster updates. 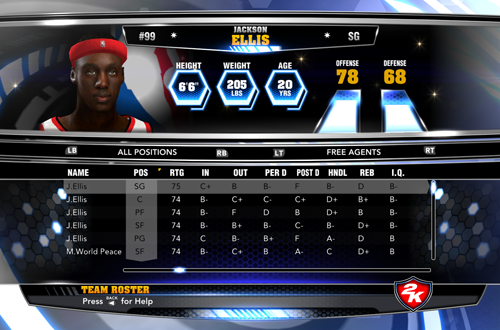 Although I’ve been rather critical of the story-driven approach this generation, I do admire and commend what the MyCAREER team has done with Jackson Ellis. Not only is he a memorable character that makes you want to best him with his smug, egotistical demeanour – and here I also have to compliment Will Blagrove on his acting – but Jackson Ellis has allowed the stories to maintain some consistent plot threads that have run through every iteration of MyCAREER these past six games, with the possible exception of NBA 2K18. He could have easily been a one-time character, but they’ve been able to make him a part of the MyCAREER Universe.

It’ll be interesting to see where the Legend of Jackson Ellis goes from here. I haven’t played past the conclusion of The Prelude in the full version of NBA 2K19 yet, so I’m not sure if he shows up again. His scene with ATM was quite enjoyable though, so even if that’s all there is, it was worth adding a new chapter to the Jackson Ellis story. Wherever MyCAREER mode goes from here, I expect that Jackson Ellis will have some kind of a presence. In many ways, he’s the mascot of the mode; certainly, he’s its most enduring character. He’s anchored the mode’s canon, even if parts of his story are shrouded in myth and full of tall tales. As of NBA 2K19, the Legend continues!