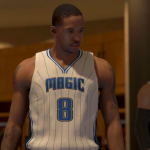 This is Wayback Wednesday, your midweek blast from the past! In this feature, we dig into the archives, look back at the history of basketball gaming, and indulge in some nostalgia. Check in every Wednesday for retrospectives and other features on older versions of NBA Live, NBA 2K, and old school basketball video games in general. You’ll also find old NLSC editorials re-published with added commentary, and other flashback content. This week, I’m taking a look back at the mentors in NBA 2K15’s MyCAREER.

NBA 2K15 stands out as quite a noteworthy game in the NBA 2K series. It was the first time that the PlayStation 4/Xbox One version was ported to PC, and the first PC release to be available exclusively through Steam with no disc-based physical copies. The game also continued the story-driven MyCAREER concept, becoming the first game in which you didn’t start your rookie season on opening night. The story of how you make it to the league featured cameos from NBA players who acted as mentors, with the real players voicing their virtual counterparts in cutscenes.

On one hand, this was an improvement over similar cutscenes in NBA 2K14, in which the MyPLAYER character was voiced while the NBA players’ dialogue was just text. On the other hand, many of their performances were notoriously and hilariously bad, as discussed in an article over on Cracked a couple of years ago. Nevertheless, it was an idea that had merit, influencing presentation and features in subsequent games. At the very least, there’s some humour to be found with the mentors in NBA 2K15, so let’s take a look back…way back…

The story in NBA 2K15’s MyCAREER is that your player goes undrafted in 2014, an obvious blow to their somewhat overinflated ego. An opportunity then comes along in January of 2015, when teams can sign players to ten day contracts. Your goal is to impress a team in a tryout by achieving the required Teammate Grade, and then land a contract for the rest of the season after two ten day stints. Incidentally, it’s possible to fail every single tryout leading to a game over – a rarity in MyCAREER – as well as end up playing for two teams if you don’t play well enough during your first ten day contract. You are always guaranteed to get picked up by the second team, however. 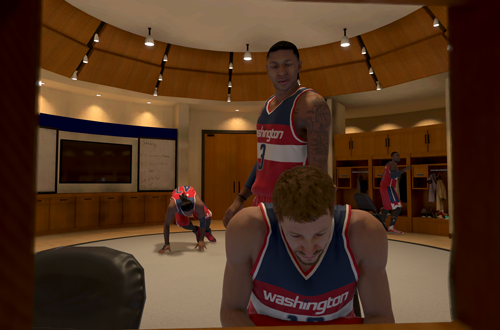 Because you’re a promising prospect with a lot to prove and a bit of growing up to do as far as your attitude is concerned, one of the team’s veterans will see fit to take you under their wing and teach you how to make it in the NBA. As I mentioned, this idea followed on from the cutscenes in NBA 2K14, only this time, everyone was fully voiced in cutscenes. A player from each team was chosen to play the role of your mentor, so no matter where you ended up, a real NBA player would attempt to advise you on how to be a good teammate, the best way to respond to tough losses, and so on. In theory, it was a good idea for a more immersive MyCAREER experience.

In practice, the results were more farcical than Visual Concepts probably intended. The main problem, as noted in the aforementioned article on Cracked, is that most of the players chosen to be mentors were not particularly good actors. Some players are clearly trying, but others are essentially just reading their lines, mumbling out their words without the emotion or inflection the dialogue requires. Others have weird pauses, or seem to flub their lines. Eric Gordon, meanwhile, is trying a bit too hard to act and sounds very unnatural as a result (or as Luis Prada put it, like he’s auditioning to be a TV host). At the other end of the scale is Dion Waiters’ “acting”.

There’s a lot to unpack here. While the developers obviously chose the players who’d make sense as mentors on each team, it seems that there wasn’t a whole lot of vetting as far as which of them could actually act. It’s bewildering to think that some of these performances were the best they could get out of the players, which lends credibility to Prada’s tongue-in-cheek suggestion that there weren’t any second takes. The weird pauses are also something that could easily be fixed in post-production. It makes you wonder if the developers realised that the bad acting would be entertaining in its own right and decided to run with it, playing the lines for seemingly unintentional comedy. 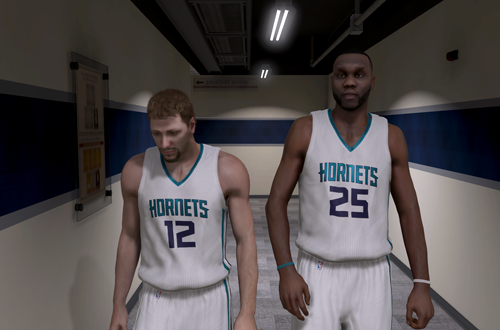 That may be giving them a little too much credit, though. It’s just as likely that they were stuck with those performances, or felt that they were more authentic to each of the mentors’ personalities. Every player reads the same lines, so you could perhaps argue that a generic script invites bland performances. If nothing else, it was a novel idea to have players voicing themselves in those cutscenes, and if they did run with the bad performances in the name of humour, I’d say mission accomplished! It doesn’t really ruin the mode or the story, as long as you’re not taking it too seriously. As I said though, I’m not sure that comedy was ever actually the intention.

After all, in the years since, they’ve clearly tried to improve the story and cutscenes in MyCAREER by bringing in some high profile actors, writers, and directors, and using NBA players in roles where they’re more comfortable and capable of giving a better performance. They’ve also aimed for moments that are intended to be funny, though the results have been hit and miss, as painfully demonstrated by the story in NBA 2K18’s MyCAREER. The bottom line is that they realised a high standard is expected of the performances and production values, in order for scenes to not come across as corny and silly when they’re not supposed to be. In short, do it well, or not at all.

Another shortcoming of the cutscenes with mentors in NBA 2K15’s MyCAREER is that they didn’t really have any tangible effect on the game. Your dialogue choices didn’t have an impact beyond the cutscene branching off in one of two directions. The conversations didn’t result in any rewards or repercussions, and the mentors didn’t have any effect on how quickly your player improved. 2K has since revisited the idea of mentors in MyLEAGUE and MyGM, with nominated players aiding in developing younger teammates by helping them to earn Badges. It stands as an example of 2K taking an idea from a previous game and repurposing it in a far more useful manner. 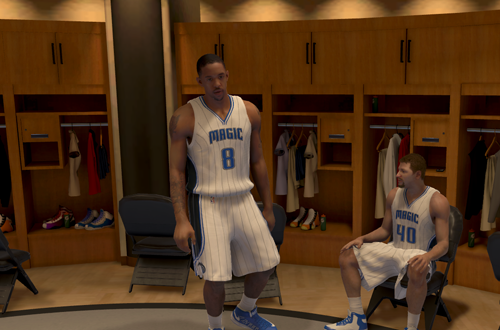 As for the cutscenes with mentors in NBA 2K15, they remain a punchline, but I’m not sorry that we got them. They were entertaining – perhaps not in the way that they were originally intended – and they represented an effort to keep trying new things, as well as increase the production values with the new story-driven MyCAREER approach. It certainly felt more “next gen” than NBA 2K14’s approach of having the MyPLAYER and fictional characters voiced, while the NBA players silently spoke in subtitles. We can laugh about them now, and appreciate that the acting has improved in subsequent games. Well, apart from one Reese’s Puffs-loving would-be improv artist, anyway…

I was signed to the Hawks and had Al Horford who was a great voice actor, so I was not aware of this incident until I went online

Horford’s got some of the weird pauses in his dialogue, but apart from that, he is probably one of the better ones.

Found this via the Anderson Murray article… I nearly died watching the Eric Gordon one lmao.

Udonis Haslem demands the rock (with actual good voice acting) in a game he didn’t even play in: https://www.youtube.com/watch?v=wrkId4SX0jM

This one is much more hilarious: https://www.youtube.com/watch?v=JWw-bQZHuus

Eric Gordon’s performance always reminds me of this scene from The Simpsons: https://www.youtube.com/watch?v=rtfrO49MJR8

Just a shame he didn’t read off any stage directions, too.

Haslem was definitely one of the better ones. Markieff Morris was not.