Wayback Wednesday: A Tribute to MessenjahMatt 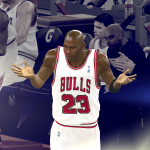 This is Wayback Wednesday, your midweek blast from the past! In this feature, we dig into the archives, look back at the history of basketball gaming, and indulge in some nostalgia. Check in every Wednesday for retrospectives and other features on older versions of NBA Live, NBA 2K, and old school basketball video games in general. You’ll also find old NLSC editorials re-published with added commentary, and other flashback content. This week, I’m paying tribute to one of the best video makers we’ve ever seen in the basketball gaming community: MessenjahMatt.

I enjoy dusting off old games for retrospective reviews and profiles of interesting features and quirks, but every so often, I think it’s only appropriate to look back at the history of the basketball gaming community. I’ve done that a few times already in my Wayback Wednesday features, mostly focusing on memorable mods as that’s what our corner of the community is best known for. However, that’s not the only kind of content that hoops gamers have seen fit to create over the years. With the steady rise of YouTube, countless virtual hoopsters have been producing video content.

Some great producers have emerged over the years, and it’s been inspiring to see. It’s the reason I’ve tried my hand at some video content myself, and if I could make the time, I’d love to do it more often. I’m sure we all have our favourite video producers, some of whom have been at it for several years now. One of the all-time best video makers has to be MessenjahMatt, who wowed gamers and no doubt inspired many who have gone on to create their own content. His work is legendary and deserves to be spotlighted, so let’s take a look back…way back…

As the description on MessenjahMatt’s channel puts it, his NBA 2K videos were all about “Featuring recreations of the moments that helped define the legacy of Michael Jordan”. While that’s very concise, it doesn’t capture the sheer brilliance of his work, or give appropriate due to the accuracy of the moments and advertisements that he was recreating using NBA 2K footage. Incredibly, MessenjahMatt was creating his videos before The Jordan Challenge was implemented in NBA 2K11, as the earliest videos on his channel are using NBA 2K8. Being a console-only release, they lack the mods that enhanced his later videos, but as you can see, they were still impressive.

Sure, a detail or two may have been off, and the lack of proper faces definitely stands out the closer you look, but the videos still captured the action and the vibe of the original moment. The use of real commentary from the original footage, combined with the careful mimicry of the action, more than made up for created faces, incorrect jerseys, and a player or two out of place. As the years went by and NBA 2K ended up coming to PC, MessenjahMatt would produce new versions of the Dunk on Ewing, and other moments captured in his early videos. With the assets provided by The Jordan Challenge, the NBA 2K11 version was extremely accurate, a thing of beauty.

In fact, I suspect that Visual Concepts may have taken some inspiration from a few of his videos when they were creating The Jordan Challenge for NBA 2K11. They were certainly aware of them given their popularity in the community, and the attention that they drew even led to a segment on ESPN. That was undoubtedly a huge moment for MessenjahMatt and to an extent, basketball gaming in general. NBA 2K hadn’t quite become the dominant brand it is now in terms of mainstream relevance, and although the hobby had been around for decades, video games were still often treated as a joke. People who played them, let alone made content with them, were looked down upon.

Within the basketball gaming community, of course, there was nothing but respect and admiration for Matt’s efforts. Even years later, we’re still marvelling at just how detailed and accurate those videos were. As I said, even before the addition of the retro teams and special animations in NBA 2K11, he was able to achieve a simply remarkable level of detail, making the most of similar animations that were at his disposal. It must’ve taken a lot of time to set up the scenarios with such accuracy, as well as creatively piece together clips accordingly. He did share one “making of” video, but we’re still left guessing about the rest of his secrets and techniques.

While his recreations of famous Michael Jordan highlights were always impressive, the most creative work that MessenjahMatt did was in replicating various ads. If you compare his version of “Frozen Moment” to the original ad, it’s amazing how accurate it is. The use of footage from other games to fill in for the shots of people watching the game, even though they weren’t all spot on, still fit the original concept and vibe superbly. Details like the shot of the bike falling over, and the game being watched on a TV in a store window, are just fantastic. Once again, the accuracy in the gameplay footage is astonishing, from the play being run to the camera angles and animations.

It’s difficult to pick a favourite MessenjahMatt video, but his best work has to be his recreation of “23 vs. 39” in NBA 2K11. It’s his most popular video too, with over 1.6 million views as of this writing. Putting aside inaccuracies such as the court they’re on and Jordan wearing a Wizards jersey, both it and the NBA 2K10 version are close to flawless. The shots are on point, as are the animations and interactions between young and old MJ. There’s even some rudimentary lip synch with the dialogue from the original commercial, not to mention an appearance from Tar Heel Mike. As I noted, mods are clearly being put to use, but Matt’s other techniques still remain a mystery.

What we can say for sure is that a lot of time and effort was involved. For that reason, there would sometimes be a couple of months between uploads, though when Matt did release new videos, it would be in a batch over the course of a few weeks. As you might expect, his most prolific year came with NBA 2K11, which also saw his most creative and ambitious projects. I remember that there was always excitement when a new MessenjahMatt video dropped, and as it made the rounds on social media, the Operation Sports forums, and here on the NLSC, we were in awe of what he’d done. If it had been a few weeks or months since his last release, it was always worth the wait.

Sadly, MessenjahMatt’s last upload was almost eight years ago today, a recreation of The Shrug game in NBA 2K11. He hasn’t been active in the OS forums since 2012, with his last post coming in late 2011. I’m not sure of the exact circumstances and I feel it would be both irresponsible and disrespectful to speculate, but as I understand it, personal matters led to him stepping away. It was a huge loss for the basketball gaming community, but an understandable decision when there are far more pressing issues to deal with. Whether you’re a modder, video producer, streamer, or whatever, real life and responsibilities must always come first, and especially before a hobby.

Nevertheless, although MessenjahMatt’s tenure as a video maker in the basketball gaming community was relatively short compared to some other individuals, his work was of incredibly high quality, always entertaining, and undoubtedly influential. With all the historical content in recent games, I’m surprised no one has taken up the mantle with similar videos. Then again, as you can see, he did set the bar extremely high. If you get the chance, I definitely recommend going back and checking out his channel. There’s a lot of fine video content and coverage of basketball gaming these days, but MessenjahMatt was ahead of his time, and one of the best producers we’ve seen.