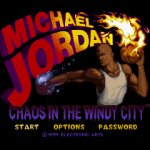 This is Wayback Wednesday, your midweek blast from the past! In this feature, we dig into the archives, look back at the history of basketball gaming, and indulge in some nostalgia. Check in every Wednesday for retrospectives and other features on older versions of NBA Live, NBA 2K, and old school basketball video games in general. You’ll also find old NLSC editorials re-published with added commentary, and other flashback content. This week, I’m taking a look back at Michael Jordan: Chaos in the Windy City, a 1994 game for the Super Nintendo.

A few days ago, Michael Jordan celebrated his 55th birthday. As such, it seems only appropriate that this week’s Wayback Wednesday takes a look back at a game starring His Airness. Given that he is my favourite player, and obviously a very prominent name in basketball, I’ve focused on Michael Jordan in more than a couple of previous Wayback Wednesday features, covering a variety of MJ-related gaming topics from his PC exclusive three-on-three game, to his inclusion in NBA 2K11 along with the Jordan Challenge. This time, I’m changing things up with a retrospective of a licensed platform game, namely Michael Jordan: Chaos in the Windy City.

Developed by Electronic Arts back when the company still had an agreement to use MJ’s likeness, it’s a quirky and interesting relic of its era. Chances are if you grew up playing video games in the 90s, you’ve heard of, played, rented, or owned this game at some point. We don’t usually cover platformers here at the NLSC, but as it stars one of the most recognisable names in the history of basketball, it’s worth talking about. Let’s take a look back…way back…

The plot of Michael Jordan: Chaos in the Windy City is kind of out there. After his first retirement from basketball, MJ ends up playing basketball with Bugs Bunny and the rest of the Looney Tunes, taking on a squad of aliens who have stolen the talents of five NBA players. Wait, no, that’s Space Jam. The plot of Chaos in the Windy City is arguably just as cartoonish, however. As we’re told in the comic book-style intro, Michael Jordan is getting ready to practice for an All-Star charity game, but upon entering the gym, he discovers that his NBA pals have all been kidnapped. It’s all part of a fiendish plot by mad scientist, Dr. Max Cranium. Yes, really. It’s a silly concept, but in that respect, it’s very similar to a lot of licensed platformers that came out in the 90s. In fact, you might be inclined to draw comparisons to a game starring another famous MJ: Michael Jackson’s Moonwalker, for the SEGA Genesis. Just as Moonwalker saw The King of Pop traverse maze-like levels while turning his music and dancing into weapons, Chaos in the Windy City sees His Airness leaping about on perilous platforms, fighting enemies with a basketball as a projectile. The story even centres on rescuing captives: children in Michael Jackson’s case, and the aforementioned basketball players in Michael Jordan’s quest.

Like Moonwalker, Chaos in the Windy City is probably best described as an average platformer that banked heavily on the licensed celebrity to appeal to gamers. As I mentioned, gameplay consists of navigating maze-like levels, which requires hitting switches, collecting keys, and breaking through walls. The controls are simple and functional, though they can feel a bit loose at times, making it easy to fall off ledges. The default weapon is an unlimited supply of basketballs, with pickups providing more powerful attacks and special abilities. Dunking in different hoops scattered around levels reveals hidden pickups, and activates checkpoints to continue from.

There’s some indirect product placement, with a sports drink (obviously representing Gatorade) and what looks like a Wheaties box providing health boosts. Michael can sustain six hits from enemies before losing a life, and starting over from the most recent checkpoint. Enemies include giant spiders, floating eye robots, grotesque mutant basketball players, and zombies with basketballs for heads. Most enemies won’t give you much trouble, though it is easy to run into them and take a hit if you try to race through the level. Fortunately, you are temporarily invincible after being hit, allowing you to get out of trouble and fight back.

Though simultaneously silly and generic, the game is at least playable. However, it can get very tedious very quickly, as the mazes of each level are quite repetitive, and there’s no map or compass to provide hints as to where to go. It’s easy to find yourself backtracking and feeling like you’re stuck, until you find a switch or discover that a wall can be broken. The slippery controls don’t help, and it’s a bit cumbersome having to use different buttons to do a normal jump and the “Slam Jump” in order to dunk in the baskets. You also need to have the correct key selected to open doors and locked switches; it’s not enough just to have all the necessary keys in your inventory. Needless to say, there’s a good chance you’ll run out of patience with the game long before you reach the final showdown with Dr. Cranium. As it stands, after messing around in the early levels for a while, I find myself entering a password to skip to the later stages and see more of the game, but it’s more of the same, just with different backgrounds. Most of the appeal lies in Michael Jordan being the protagonist, and using basketball-themed attacks. The novelty wears off fairly quickly, leaving you with a mediocre platformer on a console that saw classics in the genre such as Super Mario World, and the Donkey Kong Country series.

This is all very apparent after spending just a short amount of time with Chaos in the Windy City, but if you were a fan of basketball and Michael Jordan in particular, it was probably going to pique your interest. As I mentioned, it’s the kind of game that you’d end up renting, if indeed you didn’t commit to buying it or asking for it as a gift, simply because it had Michael Jordan in it. It’s a game that you ended up trying out or getting because you couldn’t get enough of basketball, not because it’s one of the Super Nintendo’s must-have titles. Calling it a cash-in is perhaps a little harsh though, and there are definitely much worse licensed platformers on the Super Nintendo.

Again, Chaos in the Windy City is a very much a product of its era. Many celebrities, TV shows, and movies had licensed games in the 90s, often placing their protagonists in strange settings with zany (yet still rather generic) plots. The better ones were at least playable, but the emphasis was on the novelty of playing with a famous athlete or entertainer, or characters from a popular film or show, rather than an innovative gameplay experience. The game does have some creative elements such as the ability to have short conversations with rescued players, and even some wry commentary as paparazzi are enemies in the El-Train stages, but it’s otherwise pretty run of the mill.

Notably, Nintendo Power named Michael Jordan: Chaos in the Windy City as one of the worst games of all-time in its September 1997 issue, though I personally wouldn’t go that far. It’s a largely mediocre 16-bit platformer on a console that features many other far superior and all-time great titles in that genre, but its star protagonist does make it noteworthy. It can be challenging, and if you do have fond memories of the game, I could certainly understand. To coin a trite phrase, it’s not without its charm. The SNES does have much better platform games though, and if you’re after 16-bit basketball fix, you’re better off sticking with NBA Jam or NBA Live 95.