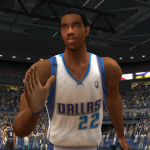 Unfortunately, Michael Redd might be a name that flies under the radar these days, especially with all the great three-point shooters that have entered the league in recent years. Michael Redd appeared in only six games for the Milwaukee Bucks in his rookie season, and didn’t become a full-time starter until Ray Allen’s departure in 2003. The opportunity led to him becoming one of the NBA’s top sharpshooters, as he set an NBA record for threes in a quarter with eight, as well as the Bucks’ single game scoring record with 57 points. A series of knee injuries derailed his final few seasons in Milwaukee, and he spent one final year with the Phoenix Suns before retiring. So, if Michael Redd spent his entire career with the Milwaukee Bucks and Phoenix Suns, where do the Dallas Mavericks come in? Well, after his second season, the former second round pick was starting to show a lot of promise. Redd appeared in 67 games for the Bucks, scoring 11.4 points in 21.1 minutes per game, and shooting 44.4% from beyond the arc. All-Star Ray Allen was the starter at shooting guard though, so Redd, a restricted free agent in 2002, was courted by teams who could offer him a bigger role. On October 1st 2002, he signed a four year, $12 million offer sheet with the Mavericks. The Bucks had fifteen days to match it.

Now, a lot of offer sheets are matched very quickly when a team is intent on keeping a restricted free agent, but there are times when there will be a delay on making that decision. One might speculate that it’s a good way for one team to mess with another, but usually it’s just a matter of weighing up the financial risk. Such was the case with the Milwaukee Bucks and Michael Redd, though they eventually matched the Mavs’ offer on October 14th, with only two days to spare. This caused an error to be made with the default rosters in NBA Live 2003 PC, as Michael Redd appeared on the Mavericks’ roster. Technically speaking, of course, it wasn’t actually an error.

The roster cut-off date for NBA Live 2003 PC was October 1st 2002, the day that Redd signed his offer sheet with Dallas. Therefore, when the rosters for the game were being finalised, he was indeed technically a Maverick. By the time NBA Live 2003 PC was released on November 12th, the offer sheet had been matched, and Redd was back in Milwaukee. The nature of Redd’s restricted free agency, and the Bucks’ reluctance to match the offer sheet right away due to luxury tax concerns, set up a situation where a transaction that occurred right at the cut-off was at risk of being negated before the game came out. In the end, that’s exactly what happened.

It’s certainly an unusual situation for a basketball video game. Although the nature of cut-off dates means that default rosters are inevitably outdated, when players are on the incorrect team, that usually means they’re still on their previous club’s roster. A lot of basketball video games have had cut-off dates in September or August, while a majority of significant free agent signings are finalised in July. With Redd’s offer sheet and the cut-off date for NBA Live 2003 PC both coming in October, it led to a rare scenario where a player in an NBA video game ended up on the roster of a team that he never actually played for (though had technically signed with for two weeks). In hindsight, it could be suggested that a preferable course of action would’ve been to leave Redd on the Bucks’ roster. A return to Milwaukee was quite likely after all, and since NBA Live 2003 does feature roster editing, gamers could have simply moved him to Dallas if need be, when making other transactions that occurred after the cut-off. There was a chance that the Bucks wouldn’t match however, and at the time, he had technically signed with Dallas. With that being said, the original players.dbf file for NBA Live 2003 PC was actually last modified on October 15th 2002, while the executable is dated October 23rd. Presumably, a change could’ve been made in time.

Interestingly, Michael Redd is completely absent from the PlayStation 2 version of NBA Live 2003, which had a roster cut-off date of August 31st 2002. Meanwhile, Redd still appears on the Milwaukee Bucks’ roster in the PS2 version of NBA 2K3, which featured default rosters accurate as of August 26th. Back then, it wasn’t uncommon for games to come out at different times for different platforms, and as a result, have different cut-off dates. As I noted in a previous article, with Yao Ming signing his rookie contract late in the 2002 offseason, he was absent from NBA 2K3 and NBA Live 2003 on PS2, but present in the PC version of the latter.

Of course, none of this would be a problem for very long these days. Obviously, we were able to fix the situation ourselves in NBA Live 2003, but with the way that official rosters are pushed through now, it’s likely that there would be an update at launch (or near enough) that would immediately correct any oddities such as this one. EA Sports did make an error with Michael Redd, though. As you can see in the above screenshot, he’s shooting right-handed in NBA Live 2003. In real life, Redd was known for his silky smooth left-handed jumper. Needless to say, that was another issue that we needed to correct when we got our hands on NBA Live 2003 PC.

Michael Redd’s career does invite a few “What If” scenarios, from his multiple knee injuries to his choice not to return to his home state of Ohio to join forces with a young LeBron James in 2005. His signing with the Dallas Mavericks in 2002 is obviously one that came very close to happening, and with the default rosters of NBA Live 2003 PC, it’s possible to play out that scenario. Had the Bucks not matched the offer sheet, he would’ve joined a Mavericks team that included Dirk Nowitzki, Steve Nash, and Michael Finley, all of whom were in or entering their prime. The roster was rounded out by solid veterans such as Nick Van Exel, and Shawn Bradley. Although he enjoyed a longer tenure in the league and the nature of their knee problems is different, Michael Redd reminds me a little of Brandon Roy. Both are players who should’ve had a longer run as stars in the NBA, but misfortune sadly stood in their way. When you go back and play old basketball video games, it can be fun to re-write history. After all, fate is often much kinder on the virtual hardwood. In Redd’s case, his career might have been very different indeed. Thanks to the unusual situation with the default rosters in NBA Live 2003 PC, we’re left with a reminder of what could’ve been, as well as an opportunity to see how it might’ve all gone down.