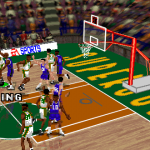 This is Wayback Wednesday, your midweek blast from the past! In this feature, we dig into the archives, look back at the history of basketball gaming, and indulge in some nostalgia. Check in every Wednesday for retrospectives and other features on older versions of NBA Live, NBA 2K, and old school basketball video games in general. You’ll also find old NLSC editorials re-published with added commentary, and other flashback content. This week, I’m taking a look back at my old columns, the Midweek Patch Report and Webmaster News.

If you’ve been around the community for a long time or perhaps read some of my previous articles, you may know that I used to run a site called the NBA Live Domain before I took over the NLSC in August of 2001. It started out as a place for me to host my own patches for NBA Live, but after a while, I felt like branching out with feature articles and the like. I experimented with the odd opinion piece and even created a subsite dedicated to covering the real NBA, but the columns that stuck were the Midweek Patch Report, and Webmaster News.

Both were regular weekly columns that became fixtures of the NBA Live Domain until I closed the site in December 2001, in order to properly focus on updating and developing content for the NLSC. They were instrumental in my development as a content creator though, so join me today as I take a look back…way back…

As the name probably indicates, the Midweek Patch Report came out in the middle of the week, specifically every Wednesday. I published my Webmaster News column every Friday. This should sound like a familiar pattern, considering the features that I’m currently publishing on the NLSC each week, but the content of those columns was very different. Whereas I aim to cover a variety of topics in my Wayback Wednesday and Friday Five features, the Midweek Patch Report and Webmaster News were a little narrower in scope. Indeed, they’re best described as weekly news bulletins and announcements, rather than opinion pieces and feature articles. The Midweek Patch Report (or MPR for short) was basically a way for me to provide progress reports for the patches I was making, as well as discuss ideas for future projects. Of course, there wasn’t always much to say. If I hadn’t made much progress on any projects, an edition of the MPR was likely going to be quite short, and they weren’t particularly long to begin with. In order to make the MPR more informative, especially in weeks where I didn’t have anything to report, I began mentioning other people’s projects and releases. When I took over the NLSC, I also discussed file additions and other housekeeping matters regarding its Downloads section.

Webmaster News (or simply WN) was similar in theme, and in fact, I occasionally used it to share updates on patches that had missed the cut when I was writing the Midweek Patch Report. However, it was mostly intended to be about recent site news, and future content plans. I’d also occasionally use it to share a few thoughts and opinions regarding basketball gaming, or mention other events in the community. As with the MPR, once I took over the NLSC, I also talked about what I was doing with it. Essentially, WN was both a look behind the scenes, and a bulletin about recent and future updates. All things considered, the MPR was probably more informative.

Looking back through the archives of Midweek Patch Report and Webmaster News articles that I have stored in my backups, I have to admit that I do cringe a little. They definitely do not reflect my best work as a writer or content producer. In all fairness, I was still a just a teenager then, and I’ve since had sixteen years to develop my writing skills. Still, I can’t help but look at the tone, the length, and the overall content of those old features, and think that I could do a much better job now. If nothing else, I’d spend more time editing what I’d written, and include some screenshots and the like so that both columns would be more visually appealing.

At the same time, while I can be critical of my earlier work, I can also appreciate what writing those features taught me. It was important to experiment with some original content, and to develop the habit of being able to stick to a weekly schedule. When I took over the NLSC, Tim encouraged me to try new things, as I’d done with the NBA Live Domain. In addition to continuing to be a central hub for gamers and patchers, my aim was to keep trying to expand with original content and new features. When I closed the NLD in December 2001, I intended to keep running the Midweek Patch Report and Webmaster News on the NLSC, but those plans ultimately fell through. In retrospect, it was probably a wise decision. With my duties of processing file additions for the NLSC’s Downloads section, there was getting to be too much overlap with the two features, making Webmaster News somewhat redundant. There was nothing I was saying on a weekly basis that couldn’t be said in its own news post, when appropriate. My patching habits slowed down a little in my final year of high school, so there wasn’t much use for a Midweek Patch Report. As for the rest of the community, the file additions posts let everyone know about the most recent releases, and again, any other newsworthy developments could have their own bulletin.

With that being said, I have thought about bringing back the Midweek Patch Report in some form, most likely with a slightly different name (such as Weekly Mod Report). While my own modding output is generally low these days, I’d likely have something to report from time to time. If nothing else, our bustling modding community would give me something to talk about, and it could be a way of spotlighting bigger mods outside of the regular file additions bulletins. By browsing the Modding sections in our Forum, or inviting modders to send me brief updates about what they’re working on, a weekly, fortnightly, or monthly MPR-like feature could work today.

Before our revamp in 2011, when we changed the design and content management system and officially rebranded ourselves from the NBA Live Series Center to the NLSC, I was also publishing a weekly news round-up on Sundays that was kind of reminiscent of Webmaster News. I might consider bringing back a round-up feature like that, though our current archive system is far more user-friendly than the CMS we were using previously. I certainly wouldn’t write a Webmaster News column quite like the original, either. I can cover far more interesting topics with The Friday Five, Wayback Wednesday, Monday Tip-Off, and of course, the NLSC Podcast.

Still, even if some of their concepts are now outdated, and I feel a little embarrassed reading what I wrote all those years ago, I do take pride in both the Midweek Patch Report and Webmaster News. As I said, they were definitely a learning experience. I can also look back on them and appreciate how far I’ve come as a writer and content creator. No matter what the creative endeavour, very few of us can say that our earliest work is also our best work. We all have to start somewhere though, and just like my first patches, I believe those early features laid the groundwork for basketball gaming content that I still enjoy creating to this day.