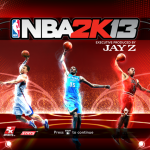 This is Wayback Wednesday, your midweek blast from the past! In this feature, we dig into the archives, look back at the history of basketball gaming, and indulge in some nostalgia. Check in every Wednesday for retrospectives and other features on older versions of NBA Live, NBA 2K, and old school basketball video games in general. You’ll also find old NLSC editorials re-published with added commentary, and other flashback content. This week, I’m taking a look back at the role Jay-Z played as an executive producer on NBA 2K13.

Back in December, I wrote an article about Jay-Z’s forgotten cameo in NBA Live 07. I received some nice compliments from people who enjoyed learning about that for the first time, as well as some suggestions to look back at Jay-Z’s involvement as an executive producer on NBA 2K13. That topic was actually already on my list of ideas for Wayback Wednesday features, but since it’s been requested, I figure there’s no point delaying it any further. After all, it’s even better if I can cover these topics when there’s interest, and to that end, I’m open to suggestions!

For now though, let’s focus on Jay-Z and his role with NBA 2K13. Obviously, the rapper wasn’t actually spending hours coding at Visual Concepts’ studio in Novato, but as it turned out, he had a significant impact on the game. His title also briefly inspired a trend in our modding community. Let’s take a look back…way back…

In July 2012, it was revealed that Jay-Z was an executive producer on NBA 2K13. As it turned out, his involvement had been hinted at in the game’s teaser cover. Gamers correctly guessed that the roses, spider, and griffins represented Derrick Rose, Kevin Durant, and Blake Griffin respectively, but the presence of the Brooklyn Bridge was a bigger puzzle. Some figured that it might’ve been a hint about Michael Jordan, who was born in Brooklyn but grew up in North Carolina. MJ was in NBA 2K13, but the famous Brooklyn landmark was in fact a nod to Jay-Z. The announcement trailer didn’t give much away, leaving us to wonder what his role actually entailed. 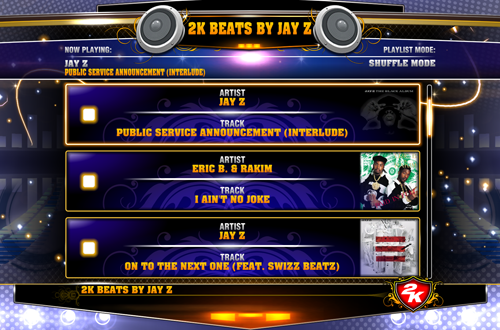 After all, the title of executive producer is used to describe different roles in the entertainment industry. It generally refers to a leadership position, though depending on the medium an executive producer can be the creator of a project, the person who oversees the creative content (such as the head writer and/or showrunner on a TV series), someone who manages financial and legal aspects (or in the case of a film, provides funding), and other such roles. Although the role isn’t as well-defined when it comes to video game development, it’s generally the person with a significant amount of creative control and responsibility for assembling the game’s dev team.

It seemed unlikely that Visual Concepts would turn complete creative control over to a rapper with no history in video game design, and indeed, that’s not what happened. Instead, Jay-Z’s role as executive producer included curating the soundtrack for NBA 2K13. This made sense given his profession, and naturally his selections included a few of his own tracks. He was also given creative control over many of the game’s visual elements, from the design of the menus to intro and outro videos. Interviews with Jason Argent, Vice President of Marketing at 2K Sports, emphasised that Jay-Z wasn’t directly involved in the development of NBA 2K13’s gameplay.

However, Jay-Z did have some input into NBA 2K13 beyond the game’s visual elements and soundtrack. He was responsible for the inclusion of the 1992 Dream Team and 2012 USA squad, not only pitching the idea but also getting Charles Barkley to agree to be in the game. Contrary to initial speculation, he didn’t get Scottie Pippen back in the game after the Hall of Famer originally opted out of his licensing agreement. His vision for a 1992 vs 2012 showdown nevertheless did come to fruition as originally intended, once Pippen changed his mind. Simply getting perennial holdout Sir Charles to appear demonstrates the impact of his involvement. With that in mind, it’s fair to say that Jay-Z’s involvement as an executive producer on NBA 2K13 benefitted the game. The Dream Team and 2012 Team USA were a great hook given that the game was released on the 20th Anniversary of the former and in the same year the latter competed at the Olympics, as well as the fact that NBA 2K13 didn’t feature a retro mode in the vein of The Jordan Challenge or NBA’s Greatest. Barkley was obviously a huge get for the game, and outside of his inclusion as a member of the Dream Team in NBA 2K13 and NBA 2K17, he has continued to decline to appear in NBA 2K until 2K agrees to donate to the retired player’s union.

Differing musical tastes make it impossible to appeal to every single person who plays basketball video games, but NBA 2K13’s soundtrack is generally well-regarded. Big names were nothing new for NBA 2K’s soundtracks – Snoop Dogg has recorded the title track for NBA 2K11 just a couple of years earlier, after all – but 2K actually confirmed that Jay-Z’s involvement allowed them to secure a few artists and songs that they likely wouldn’t have been able to otherwise. He handpicked quite a good selection of tracks, including a few of his own hits as previously noted. I’d rank it as one of the better basketball video game soundtracks from the past decade.

The design of the menus stands out as one of the more controversial contributions that Jay-Z made to NBA 2K13, as reception was mixed to say the least. The aim was an aesthetic inspired by music and culture, but some reviewers and many gamers did consider the resulting designs to be too gaudy and busy. Of course, many others liked the menus for that exact same reason. Personally, while I understand the criticisms and wouldn’t call it my favourite design, it never bothered me too much. It’s certainly unique, and makes NBA 2K13 very quickly identifiable in screenshots and videos. Navigating the menus is arguably a much bigger issue, as noted in the IGN review. As I mentioned, Jay-Z’s role and the way it was prominently advertised on the cover art inspired a trend in our modding community. Executive Producer certainly sounds like an impressive title regardless of a person’s specific responsibilities, and for a while there, various modders would refer to themselves as the executive producer of their projects. It might sound somewhat egotistical, and that is a problem that we’ve run into with our modding community from time to time, but I’d like to think that it was mostly all in good fun. The practice has since fallen out of vogue, though it’s still something that you might see happen from time to time.

Given the success of NBA 2K13, their enthusiasm at collaborating with Jay-Z, and the increased strength of NBA 2K’s brand and mainstream popularity, it’s interesting that 2K hasn’t handed an executive producer role to other prominent figures from the entertainment industry. Sure, their soundtracks have been curated by recording artists and their cover players, and NBA 2K16 featured Spike Lee’s name on the cover due to “Livin’ Da Dream“, but none were executive producers. LeBron James, Maverick Carter, and Springhill Entertainment do receive credit on NBA 2K20’s cover as the executive producers of the MyCAREER story, but the text is not as prominent.

It’s probably a case of not wanting a celebrity’s name taking attention away from their own brand on the game’s cover, though I’d also like to believe that they don’t want to detract from the hard work of their producers and programmers. I’m sure that 2K were extremely pleased with how NBA 2K13 and their collaboration with Jay-Z turned out, even though it was just a one-time deal. It resulted in a unique vibe, and best of all, it wasn’t just a publicity stunt. For the inclusion of the Dream Team and the 2012 USA squad alone, the collaboration was worthwhile as it yielded a tangible benefit for gamers. What could’ve been just a marketing ploy turned out to be greatly beneficial.

To some, however, 2K13 was the most underwhelming NBA game due to aforementioned changes and prefer going back to 2K12; the soundtracks weren’t received from outside US, and lastly the PC port is inferior to console version and its default keyboard controls were confusing.

That’s true, not every game has a 100% approval rating.