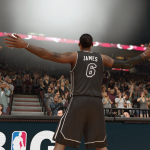 This is Wayback Wednesday, your midweek blast from the past! In this feature, we dig into the archives, look back at the history of basketball gaming, and indulge in some nostalgia. Check in every Wednesday for retrospectives and other features on older versions of NBA Live, NBA 2K, and old school basketball video games in general. You’ll also find old NLSC editorials re-published with added commentary, and other flashback content. This week, I’m revisiting NBA 2K14 for PlayStation 4, on my PlayStation 5.

Ahead of the new generation of consoles launching and the release of NBA 2K21 Next Gen, I posted a retrospective of NBA 2K14; the launch title for the previous generation. Normally I wouldn’t revisit a game so soon – especially after writing what was intended to be an in-depth retrospective – but the idea of testing out the PS5’s backwards compatibility with a PS4 launch title is too tempting to pass up. There’s something poetic about it, on top of the usual appeal of firing up old releases on new tech; a certain novelty in addition to the curiosity.

Obviously, the PlayStation 5 isn’t going to enhance the gameplay of NBA 2K14. It won’t address bugs or AI quirks, and it’s not going to add the depth and features that were sorely missed. Nevertheless, I’m interested to see how the game performs on the new console, as well as run a general compatibility test for the PS5. I’ve got the console, I’ve got the game, so let’s combine them to take a look back…way back…

Firing up my PlayStation 5, I inserted the NBA 2K14 disc. Ironically, it’s the first disc I’ve used in my PS5, as the Mamba Forever edition of NBA 2K21 Current Gen gave me a free digital copy of the Next Gen version, and I haven’t picked up any other PS5 games as yet. Perhaps it’s only fitting though, given that the reason I opted for the more expensive PS5 model with the disc drive was so that I could play my PS4 games on it, and possibly clear some shelf space by storing the PS4 and having the PS5 replace it. I’m still tossing up what to do in that regard as there are advantages to having a PS4 on hand, especially since I’m still covering NBA 2K21 Current Gen. 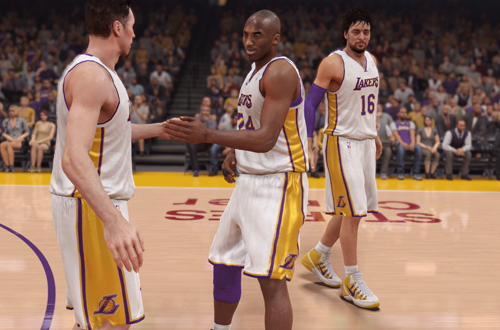 I panicked when the PS5 failed to read the disc, and my concern grew as I tried other game discs, only to encounter the same result. Thankfully, a quick Google search was able to steer me in the right direction. It seems that whenever the PS5 is vertical, discs must be inserted “upside down”; that is to say, with the label side facing down. When the PS5 is horizontal, discs are inserted the traditional way, with the label side facing up. With that sorted out, the game began installing to the hard drive as on PS4, while also downloading Patch 1.05. As on PS4, it quickly copied enough data to play the barebones exhibition game, while taking about half an hour to be installed completely.

Clearly there was no improvement over the previous generation when it came to the speed of copying from discs, but as I wasn’t really expecting there to be, I wasn’t disappointed. I was more interested to see if the game itself would load quicker, or indeed almost instantly as NBA 2K21 Next Gen does. With that experiment in mind, along with a desire to see what it was like to jump into the full game, I waited until it had finished copying. After watching the tremendous introduction (and subsequently being reminded of how much I miss those intros in recent games), I quickly re-created my MyPLAYER (as that data remained on PS4), and proceeded to the main menu.

Since I’m not playing on a 4K TV, I can’t appreciate the full resolution of the PS5, and an upscaled NBA 2K14 for PS4 is no exception. It still looked great of course, just no different than it does on its original console. There were no issues with stuttering or input lag, demonstrating that compatibility isn’t a problem. NBA 2K14 does have a slightly different feel with the PS5 controller, though. The game has rumble feedback on just about everything: dunks, collisions with other players, and even every caught pass and bounce of the ball while dribbling. With the DualShock 4, it’s fairly subtle. With the DualSense, it’s far more pronounced, almost to the point of being distracting. 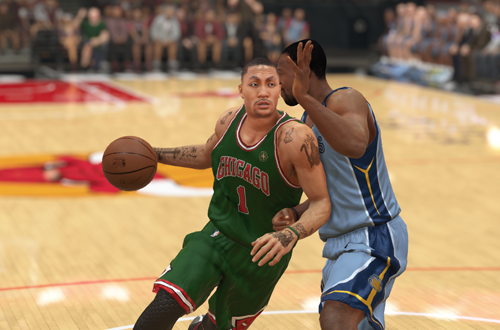 As I mentioned, what I was most interested in – as I’m sure you are as well – were the loading times. Once again, one of the big selling points of NBA 2K21 Next Gen has been that it loads almost instantly, and having played the game, I can confirm that that is indeed the case. Unfortunately, the more powerful hardware of the PS5 doesn’t grant the same benefit to a PS4 game such as NBA 2K14. However, it does load faster than on PS4. On PlayStation 5, NBA 2K14 takes a little under 14 seconds to load into a Quick Game from the team selection screen. On PS4, it takes over 25 seconds. That may not sound like a huge improvement, but it’s still a noticeable difference.

One obvious drawback of playing NBA 2K14 on PlayStation 5 is that with the servers being offline, you can’t download any of the in-game updates. As noted, Patch 1.05 will still be pushed through automatically, but it doesn’t include content such as roster updates, or the new basketball featuring Adam Silver’s signature. Of course, if you’ve reinstalled NBA 2K14 on PS4 post-server shutdown – as I did – you’re in the same boat on the game’s original console as well. It’s quite likely that it’s possible to copy that data over from the PS4 if you still have it, but I’m guessing that most of us have uninstalled NBA 2K14 at some point and lost the updates, so it’s difficult to test that.

Fortunately, I do still have some save files for NBA 2K14, and I figured it was worth trying to copy them over to the PlayStation 5. It also seemed like an ideal opportunity to test out the data transfer function. Unfortunately, as I’d already created new data files on PS5, the transfer utility didn’t allow me to overwrite them with files from the PS4; handy to know! With nothing to lose, I deleted the saved data for NBA 2K14 on PlayStation 5, and gave it another shot. This time everything went smoothly, and upon firing up the game once more, I was able to load into all of my previous MyCAREER saves, except for the one that requires an online connection and is no longer playable. 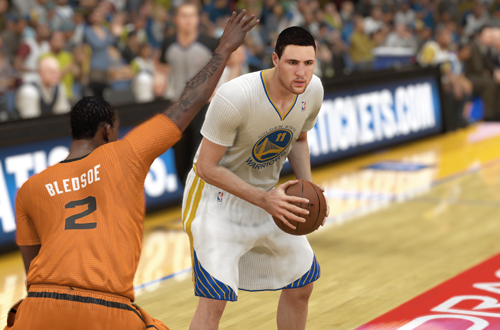 Once again, I wanted to compare loading times. It took a little under six seconds to get from the main menu to the “travelling” cutscene, while reaching the news pop-up and regaining control took another nine seconds or so, for a total of around 15. In comparison, the PS4 takes between 16 and 17 seconds to load to the same point. While it’s a fairly negligible difference compared to the faster times for loading into an actual game, it’s good to see there’s an improvement across the board. While we can’t expect the virtually instant loading of Next Gen games when using the PS5 to play PS4 games, it seems that there will be slight improvements here and there.

To that end, I would suggest that it will be quite viable to play NBA 2K14 and other PS4-era 2K titles on the PlayStation 5. The ability to easily copy across saved data, automatically download the most recent official patch, and take advantage of some faster load times, all make it feasible and perhaps desirable to use your PS5 for PS4 gaming. Of course, one obvious drawback here is the finite amount of storage space. I’d second the recommendations of installing PS4 games to an external hard drive, and saving the internal storage for your PlayStation 5 library. As you probably know, PS5 games can’t be installed to external storage yet, but expansion cards are on the way.

Personally, I won’t be using my PlayStation 5 to play NBA 2K14 at this time. I’ll wait until I can arrange to have a couple of external hard drives for my PS4 library. Also, as I noted in my retrospective, NBA 2K14 isn’t one of my favourite titles, and so it’s not a game I’m inclined to return to very often. Nevertheless, it’s great to know that running NBA 2K titles from the previous generation is not only simple and viable, but under the right circumstances, preferable. I just wish I still had the content updates for NBA 2K14 through NBA 2K17, so that I could copy them across to PlayStation 5. Let it be a lesson to reinstall games and get their updates before the servers go down!

All screenshots in this article were taken while running NBA 2K14 on PlayStation 5.

Thanks for sharing these thoughts! haven’t had a PS5 atm so I’m very curious about this. For the update files(like sync.bin file for PC version), yeah I deleted them before and quickly realized that I probably can never get it back again. I don’t miss my save files, but those update files(updated jerseys,all star court .etc). According to what u mentioned , it seems we can get the update files back with some methods? I’m not sure but really hope so(updated 2013’s Christmas jerseys are dope)

I might have to test it with NBA 2K18 PS4, but my guess is that if everything’s intact, it can be copied across to PS5 along with the save files. Otherwise, that data is unfortunately seemingly gone forever.