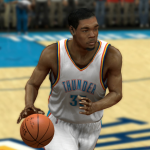 This is Wayback Wednesday, your midweek blast from the past! In this feature, we dig into the archives, look back at the history of basketball gaming, and indulge in some nostalgia. Check in every Wednesday for retrospectives and other features on older versions of NBA Live, NBA 2K, and old school basketball video games in general. You’ll also find old NLSC editorials re-published with added commentary, and other flashback content. This week, I’m taking a look back at NBA 2K15 on the PlayStation 3 and Xbox 360, part of a forgotten generation of NBA 2K titles.

Way back in the mid 2000s, the launch of the Xbox 360 (and then the PlayStation 3) forced us to change our approach to our content and coverage. At the time we were still more or less exclusively about NBA Live PC, but we now had two generations to cover: the PlayStation 2/Xbox version, which we covered because it was the one that was ported to PC, and the Next Gen version on the new consoles, as it was the release receiving the most attention from EA Sports. When NBA Live was discontinued on PC, and then PS2 a year later, we only had the 360 and PS3 version to cover.

It’s been different with NBA 2K. When it landed on PC, it was the same version that the 360 and PS3 received (give or take an online feature). We covered both the last gen PC port and Next Gen version of NBA 2K14 following the launch of the Xbox One and PlayStation 4, and then when the PC received a PS4/X1 port from NBA 2K15 onwards, we simply left the prior gen behind. Simply put, there wasn’t much reason to cover it, and I personally stopped buying NBA 2K on that generation. I’ve wondered what it was like though, and to that end, I picked up a copy of NBA 2K15 for PS3 to check out. Let’s take a look back…way back…

Upon firing up the PS3 version of NBA 2K15, it’s apparent how similar it is to the prior gen version of NBA 2K14. The frontend is almost identical, albeit with a red colour scheme rather than blue, and the option to load right into MyCAREER has been removed. Even the same teams are selected by default when jumping into Play Now, owing to the fact that Miami vs San Antonio was the NBA Finals matchup in both 2013 and 2014. The soundtrack overlays that pop up on new songs are also identical. Of course, given the clunkiness of the menus in the newer versions of NBA 2K14 and NBA 2K15, retaining the old frontend wasn’t necessarily a bad idea. 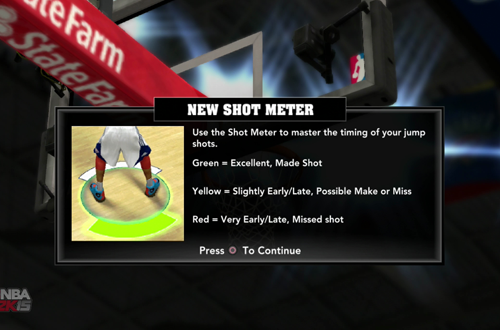 Unsurprisingly, the aesthetics in general remain unchanged. The series had already plateaued over the past couple of games, and there was no way that Visual Concepts were going to try to squeeze better performance out of superseded hardware. When you stick with the version of a game released for an outdated console, you can’t fairly expect much more than that. The same thing happened with the 16-bit games as the original PlayStation took over. PlayStation releases continued for a few years into the life cycle of the PlayStation 2, resulting in games that felt very copy and paste. As long as support continues for a previous generation, that cycle will repeat itself.

Mind you, those prior gen releases sometimes include a few features from the Current Gen version, and occasionally a few nifty exclusive features of their own. NBA 2K15 certainly includes a few such examples. The most obvious is the new shot meter that had also been introduced in NBA 2K15 on PC, PlayStation 4, and Xbox One. Rather than a simple flash that indicated the optimal release point and best chance on the dice roll, all versions of NBA 2K15 included a full meter to aid us in timing jumpshots. It also included the often divisive Green Release mechanic for the ideal release point, meaning that we no longer had to worry about a dice roll with perfect timing.

Controversy over the Green Release mechanic aside, I believe it’s fair to call this one of the most significant improvements to shooting in basketball video games. It was well-received in the Current Gen releases, and it’s great that it was able to be added to the PlayStation 3/Xbox 360 version as well. However, it’s a little weird to go back and see the meter from the PC/PS4/X1 version implemented in the PS3/360 release, with its outdated graphics. Everything else about the game looks and feels very similar to NBA 2K14, but jumpshots feel…well, Next Gen. It’s a bit jarring to see, but certainly welcome. Adopting those new mechanics alone made it better than its predecessor. 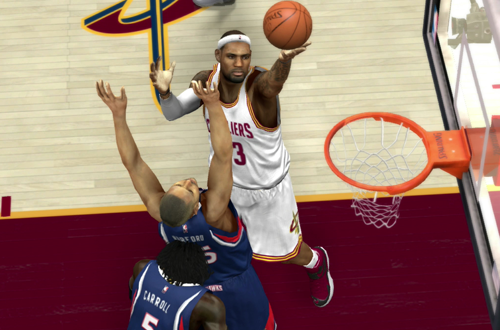 In terms of modes, NBA 2K15 for PS3/360 retained the complement found in NBA 2K14 for those platforms. Like the prior gen console versions of NBA 2K14, but unlike the PC release, it included a now-unplayable MyTEAM mode. It didn’t have MyGM or the new MyLEAGUE mode, but the franchise experience was available via the familiar Association, which by that point was pleasingly deep and robust anyway. Training Camp was still there to provide onboarding, along with the free practice modes. In fact, this was superior to the practice facilities in the flagship version of NBA 2K15. The new 2KU featured videos, but no actual interactive tutorials.

With Kevin Durant replacing LeBron James as the cover player, the Path to Greatness mode from NBA 2K14 was naturally removed. The PS3/360 version of NBA 2K15 did have its own exclusive mode however: 2K Heroes. It was based on a conversation in which Michael Jordan selected the four players he’d run with in a pick-up game, with eight players (including MJ) naming their squads. It was actually a charitable initiative, with gamers playing online head-to-head games to earn wins for each player’s squad. Whichever squad accumulated the most wins between launch and the All-Star Weekend earned a donation to the charity of the player’s choice from 2K.

Crew mode also returned as an exclusive to the PS3/360 version of NBA 2K15, which didn’t thrill gamers who wanted to see it implemented on Current Gen. The mode wasn’t quite the same as before; indeed, it bore a much greater resemblance to 2K Pro-Am, which would debut in the PC/PS4/X1 version of NBA 2K16. Unlike 2K Pro-Am, beginning a game with less than five users filled the squad with real NBA players from the chosen team, rather than generic AI players. Frankly, that’s what Pro-Am should’ve done as well! Like Be a Pro in the PS2 version of NBA Live 09, it was an example of a great idea making into the prior gen release, only to be left behind. 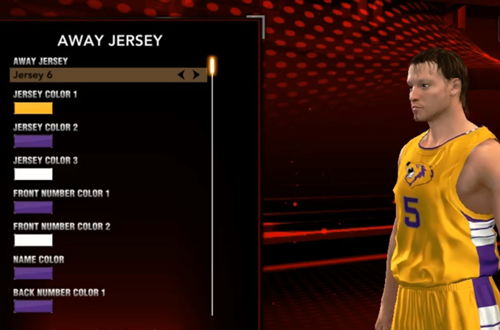 MyCAREER didn’t utilise any kind of story, though it did incorporate VC. VC was also naturally used in MyTEAM, and to unlock NBA players in the revamped Crew mode. VGChartz lists NBA 2K15 as selling a combined three million units on the Xbox 360 and PlayStation 3, which still accounts for a significant amount of the copies sold worldwide. While I don’t have any figures available to me, it seems a safe bet that the prior gen version therefore still contributed a healthy amount of recurrent revenue that year. NBA 2K16 sold a combined 1.8 million copies on 360 and PS3, a drop of about 40%. Clearly, more and more gamers had upgraded by 2015.

A significant amount of gamers were obviously still waiting to upgrade to Xbox One and PlayStation 4 in 2014 though, which is probably why NBA 2K15 is still a robust and well-rounded game on PS3 and 360. On top of the exclusive modes and new shooting mechanics, rookies have portraits, and there’s an admirable amount of polish and attention to detail for a release that wasn’t a priority. At the same time, the writing was on the wall. Future games would receive minor changes to the presentation, but very little in the way of innovation or improvement. There’s no surprise there, though it was surprising that 2K continued to release on 360 and PS3 through to NBA 2K18.

As such, there’s basically a forgotten generation of NBA 2K games, as most of us turned our attention to the version that came out on PC, PlayStation 4, and Xbox One. As I noted, once the PS4/X1 version came to PC, we didn’t really cover the prior gen releases here at the NLSC as they were no longer relevant. In our defense, they didn’t get much of a mention from 2K themselves during the preview season, either. By the end, it’s probably not a stretch to say they were a courtesy release for gamers who declined to upgrade, essentially being glorified roster updates. That term is thrown around a lot when it comes to annual sports games, but it’s a fair assessment here. 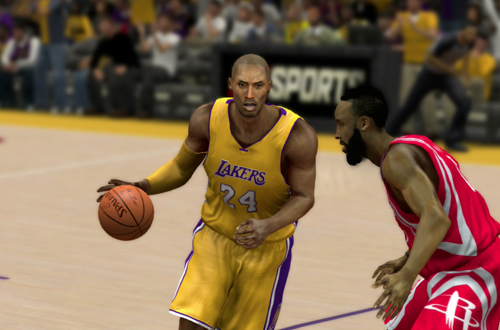 It’s the way it goes, of course, and looking at some of the improvements and exclusive features in NBA 2K15 PS3/360, I’m reminded that it wasn’t the first time that a prior gen release has been overlooked. The Xbox 360 version of NBA Live 06 is pegged as the beginning of NBA Live’s downfall, and for good reason. To that end, there are a lot of gamers that pick NBA Live 2005 as the last great NBA Live title. However, NBA Live 06 for PC, PS2, and Xbox was also a strong release, but was overshadowed by the flop on Next Gen. NBA 2K15 prior gen suffers from the same fate. It was no longer relevant to the PC community, and many console gamers were upgrading.

Looking at some of the commentary surrounding the continued releases on PS3 and 360 though, there is some positivity. Naturally there’s frustration that it’s clearly an afterthought and lacking the features of the flagship version, but gamers appreciated the simplicity of the experience. Many expressed a preference for the original style of MyCAREER to the story-driven approach in the PC/PS4/X1 version of NBA 2K15 and beyond. As previously noted, the games still featured the same recurrent revenue mechanics, but clearly for gamers with no plans of upgrading, it was preferable to not getting a brand new NBA 2K game at all. For 2K, it was probably easy money.

The further we progressed into the eighth generation, the less relevant the seventh generation releases became. To that point, NBA 2K18 sold an estimated 200,000 copies on PS3 and 360, or around 2% of the total units across all platforms. That’s still an impressive number for two outmoded consoles, though. Despite that, NBA 2K15 and the games that followed it on PS3 and 360 were as much of an afterthought for a bulk of the community as they were for Visual Concepts. If you find any copies going cheap, they’re interesting to look back at. Whether the simpler approach is better is a matter of taste, but they found an audience, even flying under the radar as they did.

The screenshots with LeBron and Kobe look nice. 🙂

The Elgato is great when it comes to capturing screenshots and video from older consoles. Definitely worth the money!