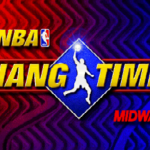 First, let’s talk about the name. Although it was developed by Midway and is a sequel to NBA Jam Tournament Edition, it obviously doesn’t bear the Jam branding. This is because Acclaim, who published the home ports of the original NBA Jam and NBA Jam TE, acquired the name from Midway. Acclaim went on to develop NBA Jam Extreme, which was widely considered to be an inferior product. NBA Hangtime is generally cited as being the true continuation of the NBA Jam series, coming from the original developer and being faithful to its predecessors. Some have disputed that it’s part of the NBA Jam lineage because of the name change, but I say it’s a Jam game. 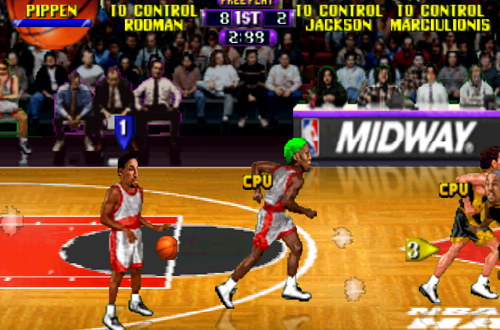 It unquestionably had the same spirit and iconic gameplay of Midway’s previous Jam games. The basic style was intact with 2-on-2 gameplay and three minute quarters, lax rules, high-flying dunks, and getting On Fire with three consecutive baskets. There were some welcome new additions, too: a spin move, leaners and fadeaways, alley-oops, double dunks (throwing an oop out of a dunk attempt to a teammate who then slams it home) and Team Fire, gained by performing three consecutive alley-oops or double dunks without the opponent scoring. Team Fire put both members of the team On Fire for 25 seconds, with the time only elapsing while the team had possession.

On top of these new moves and mechanics that were fun and exciting to pull off, NBA Hangtime also featured improved graphics and animations, and needless to say, a variety of new dunks. This made it a familiar experience, but with enough new ideas to feel fresh. The rosters were also updated, with the original arcade release featuring 1996 lineups, and the home ports being further updated for the 1997 season. In late 1996, NBA Maximum Hangtime – an update with 1997 rosters – was released in arcades. As was often the case with titles from that era, Michael Jordan and Charles Barkley weren’t included. Shaquille O’Neal and Muggsy Bogues were also absent.

Other new additions in NBA Hangtime included three digit “combination lock” cheat codes, similar to the Kombat Kodes in Mortal Kombat 3, and Create-a-Player. The former allowed us to change up the game with powerups and other modifiers, while the latter extended the gameplay experience by letting us create an avatar and unlock ratings upgrades. We could only create one player per ID however, and once a player had been created on an ID, it couldn’t be removed. This meant that you were always locked to using your custom player, which wasn’t ideal if you just wanted to play with NBA players but continue to use the same ID to track your stats and records.

With that being said, creating a player added a new dimension to the game. On top of the custom ratings that could be increased, it was also possible to choose the uniform they wore, and assign up to two special abilities such as Big Head, No Tag Arrow, Stealth Turbo, and hidden ratings. Unfortunately, when it came to the heads you could choose for your player, there wasn’t a wide selection. I remember feeling disappointed with that, as a majority of the normal heads were just existing NBA players. Being an arcade port, you also only had two minutes to create or edit players before a game. These restrictions weren’t ideal, but they didn’t prevent it from being a fun addition.

To that point, I recall having hours and hours of fun with NBA Hangtime. By the time it came out, my cousin and I had done just about everything we could think of doing in NBA Jam Tournament Edition, so we relished beating all the teams with their new rosters, levelling up our players, and discovering the game’s secrets. Even my friends who weren’t as into basketball as I was enjoyed playing NBA Hangtime. Expanding the rosters to five players by default (with substitutions at halftime) built on a great idea from NBA Jam TE. The order of some of the players was weird, though. For example, Cherokee Parks seemingly has top billing on the Minnesota Timberwolves!

NBA Hangtime does have some gameplay problems, including a handful of legacy issues. Like its predecessors, the AI in NBA Hangtime can be extremely cheap rather than clever, cheating and rubber-banding its way to victory. Gameplay can become quite repetitive once you’ve mastered the most effective tactics, and there isn’t a whole lot of replay value apart from starting over with a new ID, beating all of the teams again, and levelling up a new player. The depth was sufficient for a game of its era however, and the moves and powerups were pleasing improvements that freshened up the familiar gameplay and kept us hooked, whether we played solo or with friends. 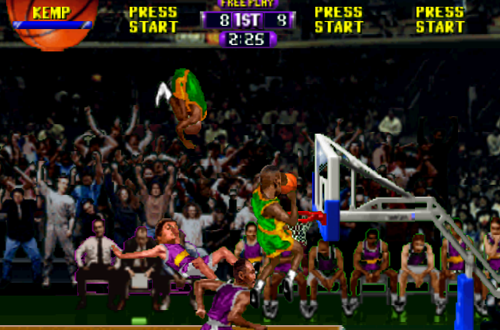 One key element that was missing from NBA Hangtime was the commentary of Tim Kitzrow. The iconic voice of NBA Jam was replaced by long-time Bulls announcer Neil Funk, who is also playable via a code. Funk did an admirable job and didn’t detract from the experience at all, but his calls didn’t quite have the same magic and “oomph” that Tim’s did. As was often the case with games of that vintage, the audio compression left his voice somewhat muffled, especially on Nintendo 64. A friend once suggested that his call of “baseline leaner” sounded like he was saying “eight time wiener”. I know it’s very silly, but once it’s been suggested, you can’t unhear it!

The NBA Jam series has always had great music, and NBA Hangtime is no exception. If you grew up with the game, listening to the soundtrack will immediately transport you back to that time, and very likely put you in the mood to dust off the game again! Standout tracks include “Whatcha Gonna Do?” by M-Doc and “I’m in the Zone“, but the background music during gameplay was the perfect accompaniment to the on-court action. I don’t dislike the use of licensed music in basketball games, but there was something special about those original tracks in NBA Jam, NBA Hangtime, and even the early NBA Live titles. They were fantastic compositions that set the mood.

As I mentioned, I grew up playing the Nintendo 64 version, which by most accounts was the best home port. The PlayStation version was criticised for lengthy loading times, though it wasn’t alone in that regard. Looking back at a few of the reviews, I’m surprised by some of the negativity, though the criticism was mostly due to similarity to its predecessors rather than design flaws. They have a point, and it is admittedly more noticeable in hindsight, but it ultimately didn’t stand in the way of having fun with Hangtime. Midway still had the best arcade hoops title, easily superior to their many imitators. Even Acclaim’s game felt like a pale imitation, despite the Jam name. 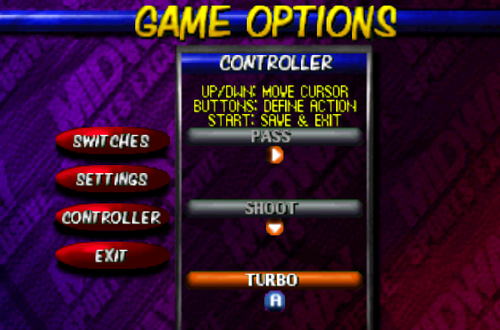 Although it was considered the best home port, the N64 version does have a couple of quirky issues. Its default controls are unusual, especially given the N64 controller’s infamous design. The C buttons are used for Shoot/Jump and Steal/Pass, with the A button used for Turbo. Fortunately the controls can be changed, and multiple buttons can even be assigned to each function for greater flexibility. The data management system is also limited to deleting the entire save file from your Memory Pak in a menu accessed by holding Start while turning on or resetting the console. Individual IDs and created players can’t be deleted, and that’s something we really needed.

Even though some aspects of the game are dated, NBA Hangtime has a tremendous pick-up-and-play quality that I believe would resonate beyond those of us who grew up with it. I’ve mentioned that NBA Jam: On Fire Edition still stands as a superior game to the NBA Playgrounds series, and looking back, I’d say that NBA Hangtime compares quite favourably as well. Its gameplay is so well-balanced, and its concepts so well-executed, that it stands the test of time. It’s remarkable how well it holds up, and it’s a testament to the skill and dedication to quality that the developers at Midway possessed. The games would evolve, but those early titles got so many things right.

In terms of ranking NBA Hangtime among other games in the NBA Jam series, it’s right up there with the best releases. I personally have more nostalgia for NBA Jam Tournament Edition, in no small part because it came out before NBA Hangtime and thus I played it first, but Hangtime is right there behind it, and technically the superior game. It’s the little things that I remember and the many hours enjoying everything it had to offer that makes it special. From finding out how to change Dennis Rodman’s hair colour before the game and playing on the rooftop court, to unlocking ratings points for my player and playing four player games with my friends, it was a blast. 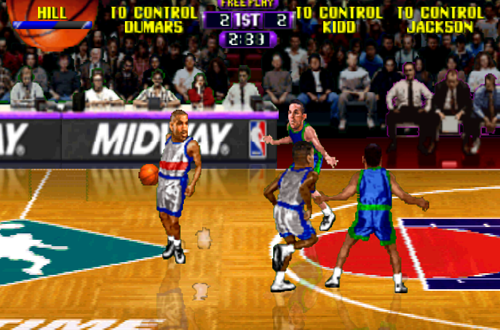 It’s taken me a while to get around to NBA Hangtime, but I’m glad that I’ve finally been able to take a look back at this classic release. It may not have carried the NBA Jam name, but it’s one of the best games in Midway’s series, and proof that the game was more than a catchy moniker and cool brand. Yes, in some ways it was more of the same, but the familiarity with a few new wrinkles worked in its favour. Through introducing features like Team Fire and Create-a-Player, and adding new moves with spins, leaners, fadeaways, alley-oops, and double dunks, it improved upon gameplay that was already fantastic. TE pumped up the Jam, and Hangtime remained on fire.