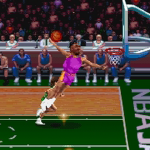 This is Wayback Wednesday, your midweek blast from the past! In this feature, we dig into the archives, look back at the history of basketball gaming, and indulge in some nostalgia. Check in every Wednesday for retrospectives and other features on older versions of NBA Live, NBA 2K, and old school basketball video games in general. You’ll also find old NLSC editorials re-published with added commentary, and other flashback content. This week, I’m taking on a retro basketball gaming challenge with the PC version of NBA Jam Tournament Edition.

It’s been far too long since I made a video feature, despite my intention to produce more video content this year. Better late than never though, as I had a fun idea for this week’s Wayback Wednesday. Whenever I played NBA Jam Tournament Edition solo back in the day, I tended to play with Tag Mode off, and scored most of the team’s points with the player I was controlling. However, playing point guard for our Pro-Am squad in NBA 2K has given me a taste for racking up assists, which left me to wonder: can I win a game of NBA Jam TE with my CPU teammate scoring all of our points?

I fired up my old favourite, and gave the No Points Challenge a shot. Let’s take a look back…way back…

Catch it here on our YouTube channel if you can’t see the embedded video, and while you’re there, be sure to subscribe! With any luck, I’ll be able to produce some more videos in the not too distant future. I’ll probably also look to upload some excerpts from the NLSC Podcast – which will also be returning soon – so stay tuned for that. I may also tackle some other retro basketball gaming challenges for future Wayback Wednesday features, so if you have any suggestions in that regard, feel free to post them in the comments below!