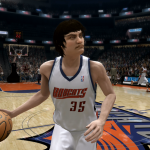 This is Wayback Wednesday, your midweek blast from the past! In this feature, we dig into the archives, look back at the history of basketball gaming, and indulge in some nostalgia. Check in every Wednesday for retrospectives and other features on older versions of NBA Live, NBA 2K, and old school basketball video games in general. You’ll also find old NLSC editorials re-published with added commentary, and other flashback content. This week, I’m taking another look back at NBA Live 07, and considering whether or not it’s still the worst game in the NBA Live series.

Although I do stand by what I said in my previous retrospective, sometimes games are worth a second or third look with fresher eyes and different perspectives. I found that I liked the Xbox 360 version of NBA Live 06 much better after giving it another chance and adjusting to its style of play. I’ve also developed a greater appreciation for NBA Live 10. It admittedly seems a very unlikely prospect with NBA Live 07, as it has a well-earned reputation as one of the worst games in the series, if not the worst NBA Live release. Nevertheless, I’m interested in giving it one more chance, and drawing some comparisons to other flawed titles. Let’s take a look back…way back…

If you ask most long-time basketball gamers whether NBA Live 07 is the worst game in the series, the answer will probably be “yes”, and the discussion will end there. It’s understandable given the game’s shortcomings and reputation, but in recent years, the disappointing releases on the eighth generation have made me wonder if NBA Live 07 is still the worst game in the series from top to bottom. While NBA Live 07 has many flaws, it can be argued that other titles in the series have been worse in certain areas. Also, like many bad games, NBA Live 07 plays slightly better if you adjust and make allowances for its flaws. We shouldn’t have to do that, but it’s worth testing out. 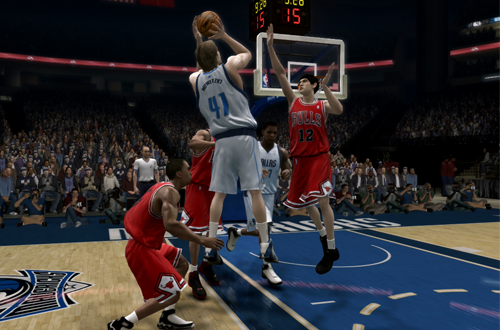 Take jumpshots, for example. They are definitely clunky, and suffer from the rough transitional animations that also afflict dunks and layups. At the same time, they aren’t as jerky if you know the timing. In most of the older NBA Live games, there was a larger window where you continued to hold the shoot button before releasing it at the top of your jump. NBA Live 07 has a much smaller window to release shoot before you trigger the late release animation. I would say that the window is too small, but if you’re able to adjust your timing, jumpshots do feel smoother and will have a higher rate of success. It was an off-putting change though, as it can be quite unforgiving.

On the other hand, there’s no adjusting to account for the issues finishing at the rim. The separate dunk and layup buttons were overkill, and when you dust off NBA Live 07, it’s all too easy to neglect the latter. Far too many dunks and layups are missed, in no small part thanks to awkward animations that are poorly chosen and transitioned into in an extremely clunky manner. Too often, you’ll end up behind the backboard or on the other side of the rim. Even when a dunk or layup is successful, it seldom looks very good. Again, there are no adjustments to make here; nothing we missed when the game was new. Paint play simply isn’t good or polished, with problematic animations.

I will say that until I play it again, I remember player movement in NBA Live 07 being far heavier than it actually is. It’s more a case of specific scenarios feeling clunky, such as catching passes, triggering dunks and layups, or as noted before, holding the shoot button down too long. If you run around in circles without the ball in The Temple, you’ll find that player movement is as smooth as it appeared in the PlayStation 3 tech demo at E3 2006. Dribbling doesn’t feel too bad either, but some of the smoothness is lost, and you’ll soon encounter those rough transitional animations once you start trying to string moves together, and contend with any defenders. 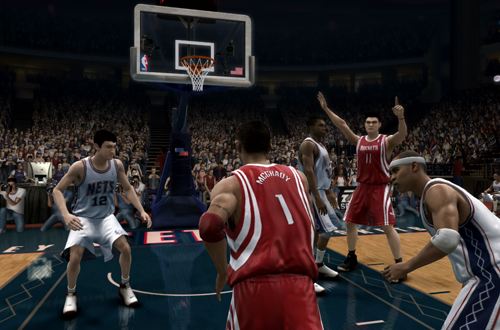 Player movement being freer than I recall is one of the reasons why I’m not entirely sure that NBA Live 07 is still the worst game in the series. NBA Live 14 feels much stiffer on the sticks, while having similar issues with its animations. I’ve felt more frustration trying to play NBA Live 14 again than I have NBA Live 07, which has led me to wonder whether the former now holds the dubious honour of being the worst NBA Live release. There are a few other key factors to consider here, namely depth, the era of release, and the subsequent expectations. Games are naturally going to be compared to their peers and predecessors, adding context to the “worst” debate.

Both NBA Live 07 and NBA Live 14 were saddled with high expectations that they failed to reach. NBA Live 06 had been a misstep with its lack of depth, but as I noted in my article revisiting that game, its gameplay was solid. NBA Live 07 brought back Dynasty and All-Star Weekend, but was a rougher experience on the court. NBA Live 14 was the first release after two cancellations and three years in limbo. Many of us hoped that the added development time would result in the necessary polish, but that wasn’t the case. NBA Live 14 also lost roster editing and depth in Dynasty, making it underwhelming despite the addition of Rising Star and the first Live Ultimate Team.

When you consider the time that both games came out, and the expectations that were placed upon them given the available technology and what NBA 2K was doing at that time, it can be argued that NBA Live 14 was the bigger disappointment. Does that also mean that it takes the title of worst game in the series from NBA Live 07? I do believe that you can make that argument as well. It’s not that NBA Live 07 is actually significantly better than most people remember, though through perseverance it is possible to adjust to its roughness. Rather, it’s just that NBA Live 14 is equally rough, despite being a much newer release and theoretically having better tech at its disposal. 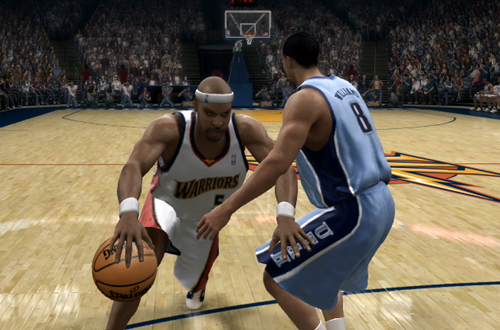 For all its issues though, I can finish a game of NBA Live 07 on Xbox 360. I can’t get through an entire game of NBA Live 14. Ironically, I did play more of NBA Live 14 when it was new, pushing myself to adjust and find moments of enjoyment amidst the roughness. I wasn’t able to do that with NBA Live 07 when it was new, yet now I find it’s the more playable of the two infamous releases. That’s not to say it’s consistently fun or enjoyable, because it’s still riddled with problems. I find it interesting to revisit for a game or two, before ultimately growing weary of its issues and shelving it once more. I have a higher tolerance for it than NBA Live 14, but it’s a low bar either way.

Contrary to revisiting NBA Live 06 on Xbox 360, I’m not left with the impression that NBA Live 07 is overlooked or underrated in any way. My overall opinion of it hasn’t really improved after taking another look back at it. I would say that there are certain aspects that feel better once you grow accustomed to them, such as jumpshot timing. It’s lighter on the sticks than NBA Live 14, though it’s brought down by an inability to finish consistently around the rim. Picking the right moments to attempt a dunk or a layup rather than always hitting dunk near the rim improves effectiveness in the paint, but you’re still at the mercy of bad animations, cheap defense, and a low success rate. 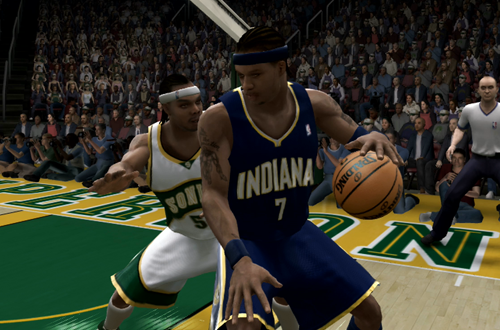 I haven’t changed my mind about NBA Live 07 being one of the absolute worst games in the NBA Live series, but all things considered, is it still at the bottom of the pile? I continue to lean towards giving the nod to NBA Live 14. It was the bigger bust when you consider the time it came out, what its competition was doing, how thin it was on modes, features, and content, and the stiffness on the sticks. NBA Live 07 is a bad game that I can find a way to enjoy (somewhat ironically) with when I go back to it. I’ve noticed mechanics that work slightly better than I remembered once I’m used to them. I really don’t notice any positives like that when I go back to NBA Live 14.

There’s an interesting sidebar here about whether NBA Live 07 and/or NBA Live 14 rank as the worst basketball games, period. Honestly, I’d have to say no. For all their faults, there’s still a certain degree of polish and competence to them. I’d point to a shovelware game like Kidz Sports Basketball, or the hilariously bad Jammit – and yes, I will be getting to that one in time as it’s in my collection – as far worse hoops titles. Even Fox Sports NBA Basketball 2000 is a contender, though it’s arguably more fun to play. NBA Live 07 and NBA Live 14 rank among the worst NBA Live titles, and they’re down there as far as Triple-A games are concerned, but I’ve played worse.

As for the NBA Live series, even if NBA Live 14 now ranks as the worst release, that isn’t saying much for NBA Live 07. At the very least, it’s still in the bottom two or three; perhaps the bottom five if we’re being really generous. It’s no surprise that it proved to be another setback for the series in the mid 2000s. It was a rough release nestled between a solid but shallow game in NBA Live 06, and a more polished effort in NBA Live 08 that had to overcome an increasingly negative reputation. There’s something oddly fascinating about NBA Live 07 and its reputation as the worst game in the series; whether it’s truly justified, and whether it’s been surpassed (so to speak). 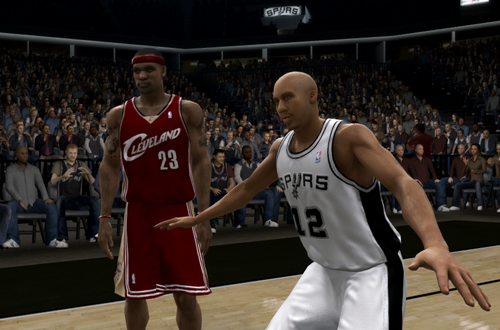 These days I feel it may have been, but I won’t fault anyone for still nominating NBA Live 07 as the worst game in the series. On this look back, I noticed a few things that were better than I recalled, but the familiar issues with animations, questionable fouls, and other moments that range from quirky to frustrating, are still apparent. There are times when a second look changes your overall opinions of a game, but this isn’t one of them. At most, I may have solidified my opinion that NBA Live 07 is the second worst next to NBA Live 14, but it’s a close race between the two. Both disappointed gamers, and put the NBA Live series in a difficult spot with lasting ramifications.