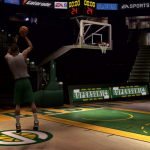 This is Wayback Wednesday, your midweek blast from the past! In this feature, we dig into the archives, look back at the history of basketball gaming, and indulge in some nostalgia. Check in every Wednesday for retrospectives and other features on older versions of NBA Live, NBA 2K, and old school basketball video games in general. You’ll also find old NLSC editorials re-published with added commentary, and other flashback content. This week, I’m taking a look back at the practice arena in NBA Live 08.

For artists working on sim basketball games, there isn’t always a lot of room for creativity. Since the aim of the genre is to depict the NBA, its teams, and its players as realistically as possible, there aren’t as many opportunities to take liberties and utilise creative license. However, there are a few areas of the game that invite an artistic flourish, including settings such as The Neighborhood and The City, special effects in MyTEAM, fictional street courts, certain clothing items, and the frontend in general. Oh, and the practice arena.

Over the years, a lot of creativity has gone into creating an appealing practice arena for us to shoot around in, particularly in NBA Live. We’ve had The Temple in NBA Live 06 and 07, The Hangar in NBA Live 10, and the adidas-branded gym in NBA Live 15. NBA Live 09 introduced us to the NBA Live Academy. In NBA Live 19, we were even invited to design our own court where we could shoot around. A setting that is often overlooked, however, is the humble practice arena in the PlayStation 3 and Xbox 360 version of NBA Live 08. Let’s take a look back…way back…

Coming on the heels of The Temple, the NBA Live 08 practice arena was quite a change in style. Compared to a futuristic setting with big screens and backboards that constructed themselves before our eyes, it was far more mundane. It was basically a darkened NBA arena, the courtside seats only just visible in the shadows, with one half of the court illuminated. Cover player Gilbert Arenas was always the first player selected to shoot around with, and the court displayed Washington Wizards branding by default. We could set another team’s floor as the default (and change it whenever we desired), but Arenas would always be selected whenever we loaded into the gym. 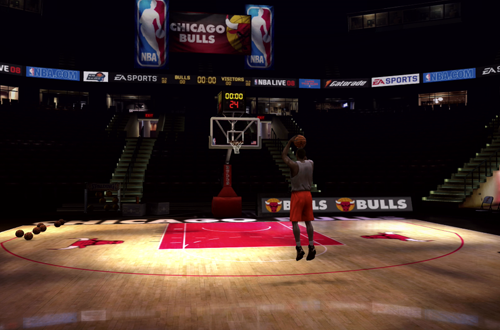 On the surface, this might seem a little boring compared to The Temple, but tonally, I believe it was a worthwhile change. The practice arena in NBA Live had always been a street court or EA Sports branded gym, which were fine, but didn’t really underscore the “NBA” part of NBA Live. In NBA Live 08, the presentation mimicked a player heading to the team’s arena to get some shots up a few hours before a game. Upon switching branding, the camera zooms into the backboard, and then pulls back out to reveal the newly selected floor. It was an elegant way to load in the new court, rather than just freezing everything in place or leaving the environment completely.

In terms of basic functionality, the NBA Live 08 practice arena is very similar to The Temple. It’s still possible to add a second, third, and fourth player to play impromptu pickup games. There aren’t any drills – that wouldn’t come until the following year with the NBA Live Academy – though there was now an Xbox Live Achievement for making five consecutive three-pointers while shooting around. Additionally, we were no longer able to continue shooting around while loading into gameplay. Instead, the loading screen displayed a trivia game. Considering that the 360 version originally had a bug that caused long loading times, shooting around would’ve been preferable!

It’s also impossible to move your selected player beyond the halfcourt line, restricting them to the illuminated half of the arena. While it’s a novelty to be able to dribble around the entire court, we weren’t able to take shots at both baskets in The Temple anyway, so there was no harm in keeping the action at one end of the floor. On a side note, it’s interesting that a handful of older sim titles allowed us to shoot around at both ends in practice mode, yet only being able to take shots at one basket became the standard around the early to mid 2000s (The Hangar and Academy being notable exceptions). Not that we need that ability, but it was an interesting choice to drop it.

The NBA Live 08 practice arena was also used to spotlight the new Go-To Moves. Upon selecting one of the 40 players with a Go-To Move, a video would pop up in the top right corner of the screen, featuring clips of the player performing the move in real life, followed by a clip of them performing it in-game. A demonstration alongside the ability to control the player made it much easier to learn what all the players’ moves were, where we needed to be on the floor, and how to pull them off with the left stick and Shoot button. The clips could be replayed as many times as necessary. Controls and other tips could also be displayed or hidden during shootarounds.

There are some interesting quirks with the NBA Live 08 practice arena that you may have discovered over the years. The first is an apparent bug with one of the floor options. In addition to being able to choose one of the 30 NBA teams’ branding, there’s also an option for “Any”. Presumably this is intended to load one of the floors at random, either every time you boot up the game, or whenever you exit a game or mode. When selected however, it always defaults to the Washington Wizards’ court. As far as I can tell it’s a bugged feature, though there may be something that I’m overlooking with that option. Testing it out again though, it does seem to be broken.

A minor bug that I can definitely confirm is in the game concerns the jersey worn during shootarounds. All players wear their team’s practice gear: a grey singlet with the team’s branding, and shorts that match the team’s primary colour. However, if you switched from Gilbert Arenas to another player, loaded a roster, and then backed out of the menus to the practice arena, Agent Zero would once again be selected, only now for some reason he would be wearing the Wizards’ home jersey. Like most visual glitches, there’s no real point in doing this except to see it in action, but it’s a weird bug that I’ve discovered while messing around with NBA Live 08 on Xbox 360. 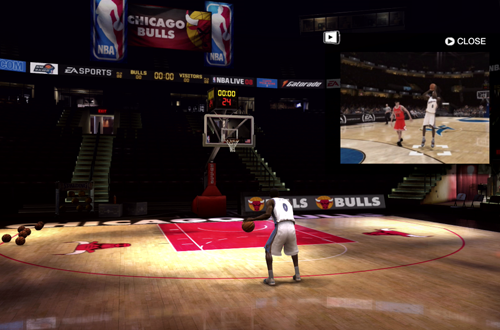 Getting back to the concept, I’ve always liked the idea of adopting a more traditional NBA setting for the practice arena in NBA Live 08. It may not boast the creativity of The Temple, or even the uniqueness of the Tandy Rec Center that was featured as the practice arena in the PC, PlayStation 2, and Xbox version of NBA Live 06, but I still find it quite visually appealing in its own right. I like that around that time, NBA Live was aiming to capture the presentation and atmosphere of the NBA. A concept court like The Temple was great to emphasise a Next Gen feel in NBA Live 06 and NBA Live 07, but I believe that the atmosphere of sim games should be grounded in reality.

It obviously isn’t as creative or visually striking as the concept courts, and as such, a lot of gamers may find it more forgettable in comparison. Personally, I find that the uniqueness of the approach to the NBA Live 08 practice court compared to other gyms in the series makes it stand out in its own way. The Go-To Moves concept was also integrated quite nicely with the pop-up tutorial videos, and if nothing else, I’m guessing that long-time basketball gamers might remember seeing them back in the day. That kind of in-game onboarding was fairly new to the NBA Live series, and even though it was more mundane compared to The Temple, it was fresh and new.

At a time when NBA Live definitely needed to stay connected to its sim roots and take its portrayal of the NBA seriously, I think the NBA Live 08 practice arena was in line with the game’s general tone and philosophy. It’s not the most creative setting to shoot around in, but it’s still well-designed, appealing, and most of all, functional. It had a couple of noteworthy features – and quirks – and marked an increased effort to provide onboarding with the Go-To Moves tutorials and on-screen tips. To this day, I still enjoy jumping in there and pulling off the fake spin move that I’ve loved since I first saw it at the NBA Live 08 community event, all those years ago.