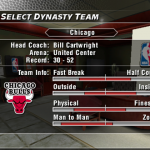 This is Wayback Wednesday, your midweek blast from the past! In this feature, we dig into the archives, look back at the history of basketball gaming, and indulge in some nostalgia. Check in every Wednesday for retrospectives and other features on older versions of NBA Live, NBA 2K, and old school basketball video games in general. You’ll also find old NLSC editorials re-published with added commentary, and other flashback content. This week, I’m taking a look back at my memorable NBA Live 2004 Dynasty game.

In a Wayback Wednesday feature a month ago, I reminisced about my NBA Live 06 Dynasty with the Chicago Bulls. It was one of my all-time favourite experiences on the virtual hardwood, and at the time, I enjoyed documenting it in the Stories section of our Forum. It wasn’t my first story topic however, nor was it my only memorable Dynasty game. A couple of years earlier, I’d taken control of the Bulls in NBA Live 2004, playing through a season of ups and downs on route to what was an unlikely championship to say the least.

What was originally meant to just be a first look at the newly renamed and revamped Dynasty mode would turn into an experience that had me hooked for several months. Although I’d been a fan of the franchise concept since it was introduced back in NBA Live 2000, I would suggest my NBA Live 2004 Dynasty is what really solidified my appreciation for the mode. Join me as I take a look back…way back…

Before NBA Live 2004, I’d started quite a few Franchise games with mixed results. My cousin and I played through an abbreviated 28 game season in NBA Live 2000, bringing another championship to Portland with a stacked Trail Blazers squad that included Shaquille O’Neal. I had a lot of fun with the Sacramento Kings in NBA Live 2002, but never finished the season (I’d later find some closure). With the Bulls taking Jay Williams with the second overall pick in 2002, I had grand plans of a franchise in NBA Live 2003, but I grew weary of the gameplay. I also started a game with the Timberwolves that year, but I shelved NBA Live 2003 halfway through the season. 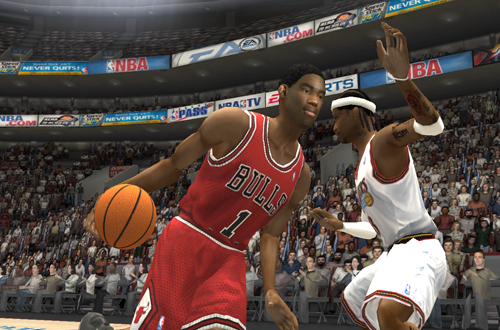 It was a different story with NBA Live 2004. As noted in my retrospective, EA took note of our criticisms of NBA Live 2003, and corrected course. Gameplay sliders were added, new physics were introduced, and overall, NBA Live 2004 was a huge improvement upon its predecessor. It also saw the first in-depth enhancement to the franchise experience since its debut in NBA Live 2000. Now called Dynasty mode, we were able to trade picks, gauge the CPU’s interest in our players and the trade being offered, train our players during the season, and retire jersey numbers, to name but a few of the improvements. Needless to say, I had to try it out.

The Chicago Bulls of the early 2000s weren’t the most appealing team to play with. They had some decent players, but they were a far cry from the glory days of the 1990s, both in real life and on the virtual hardwood. Still, I missed playing with them in video games, and as a fan of the real team, I felt a certain amount of loyalty. At the time, the PC version of NBA Live came out slightly later than the consoles, but since I had a PlayStation 2, I was able to get my hands on NBA Live 2004 earlier through double-dipping. As I said, I was only meaning to explore Dynasty mode as I figured I’d start my “real” game on PC, but I ended up running with the Bulls on PS2.

Early on in that first season, it was definitely challenging to get wins. That was partly due to the fact that I was still getting used to the gameplay when I started my Dynasty, and figuring out my preferred slider settings. It was mostly due to the roster I had at my disposal though, as there were games where I felt I didn’t have enough talent to get the job done. While it probably wouldn’t have made a huge difference, I chose to keep Jay Williams on the injured reserve, given that he’d been ruled out for the season following his motorcycle accident (and indeed, it ultimately ended his career). Sitting at around .500 after twenty or so games, I found myself mulling trade scenarios. 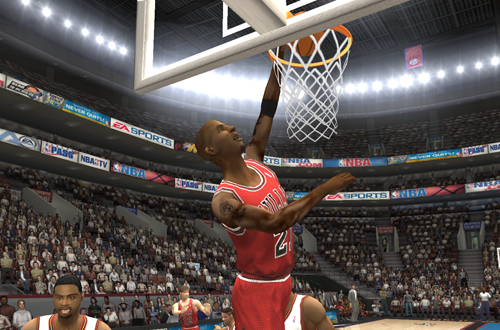 In real life, the Chicago Bulls had recently traded Jalen Rose, Donyell Marshall, and Lonny Baxter to the Toronto Raptors for Antonio Davis, Chris Jefferies, and Jerome Williams. After saving a backup of my game, I tried the trade and it was accepted. I had to decide whether I’d mimic the real Bulls’ move, or lean into the fantasy aspect of the mode and make my own trades. Ultimately, I decided on the latter, experimenting with deals for Allen Iverson and Kevin Garnett. The Philadelphia 76ers weren’t at all interested in giving up The Answer, but surprisingly, the top-seeded Timberwolves were willing to part with KG. It was an opportunity that was too good to pass up.

My trade of Jalen Rose, Marcus Fizer, and Roger Mason Jr. remains one of the best deals I’ve ever been able to pull off in a basketball video game. To this day, I’m not sure why the CPU agreed to it, since try as I might, I haven’t been able to replicate the exact swap in any recreation of the Dynasty. Interestingly, the move didn’t have an immediate positive impact. I lost four of the first five games with KG in the lineup, and another recent acquisition – veteran point guard and former multi-time All-Star Tim Hardaway – wasn’t really moving the needle either. I didn’t regret making the trade, of course. Garnett was simply too fun to play with.

As you might expect, the move eventually began to pan out in my favour. While I’d continue to suffer losses here and there (including some blowouts), I began climbing further and further above .500. I was rolling by the All-Star break with a record of 36-17; first in the East and second overall. Although All-Star Weekend mode wouldn’t debut until NBA Live 2005, I decided to get creative and stage my own event. Using roster updates on PC, I played the Rookie/Sophomore game in NBA Live 2004, the Three-Point Shootout in NBA Live 2000, and even staged a Slam Dunk Contest in NBA Live 2003’s practice mode! It was fun content for my story topic. 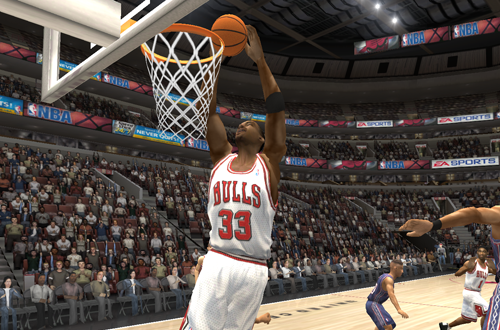 Strong performances from KG including a 36-rebound game fuelled a twenty-game winning streak at one point, and I finished the season with a record of 64-18. I swept my way through the East, and was surprised to see the Kings come out of the West, as NBA Live 2004’s sim engine tended to favour either the Dallas Mavericks with Steve Nash and Dirk Nowitzki, or the new-look Los Angeles Lakers with Shaquille O’Neal, Kobe Bryant, Karl Malone, and Gary Payton. I swept the Kings to make it through the entire postseason undefeated, capturing championship number seven for the Bulls. KG picked up Finals MVP honours, pairing it with the regular season MVP trophy.

After playing every regular season and Playoff game with twelve minute quarters, I was feeling a bit burned out on NBA Live 2004 after the first season. Still, I did play a few games into the second season, and would later simulate through to the Playoffs, where I went on to win another championship and retire Scottie Pippen’s jersey. When I traded in my original copy of NBA Live 2004 PS2, I ended up deleting the save file; a decision that still ranks up there among my biggest basketball gaming regrets. I’m glad that I have my story topic in our Forum for my records, and scanning through it for this retrospective brought back many fond memories of that time.

Acquiring KG and putting up big numbers with him was naturally a highlight, but I also came to really appreciate the roster I had in my NBA Live 2004 Dynasty. Rookie Kirk Hinrich found his way into the starting five (as he would in real life), which led to me becoming a fan of his. An aging Scottie Pippen was my number one option in the early going, but he settled into a supporting role as the season wore on. Playing with Jamal Crawford, Eddy Curry, and Tyson Chandler also made me feel optimistic about the real Bulls. While those players would all move on, and the Bulls haven’t quite reached the same heights, it turned out that better times were on the horizon. 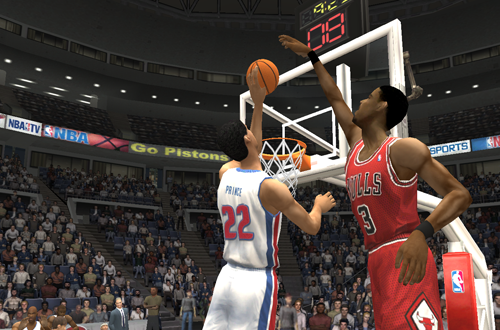 I’d attribute the success of my NBA Live 2004 Dynasty not only to the KG trade, but my decision not to make trades beyond that. I tried out a variety of starting lineups, moving a couple of versatile players between positions and finding out who worked better for me as a starter, and who gave me the right spark off the bench. As much as winning all those games and a virtual championship, little things like managing your roster and the overall ebb and flow of a season while playing every game are what make franchise modes so special. I may have drifted towards career modes in recent years, but reminiscing about my Dynasty games has me keen to return to my roots.

Live 2004 was a personal favourite of mine, that and 06 in which are the only two titles in the series that I’ve been able to complete a full 82 game season 12 minute quarters no Sims which I think speaks volume on how playable both of them games were back in the day.

I’ve had many failed franchise attempts since then and I will continue to play that mode with hopefully a few more full seasons completed too.

I might have to go into more detail about some of my failed attempts, as I had some good ideas and bad ideas. A lot of them fell flat because I wasn’t feeling the game, but others just didn’t pan out for other reasons. My Dynasty games in 2004 and 06 were a lot of fun, though.