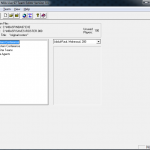 This is Wayback Wednesday, your midweek blast from the past! In this feature, we dig into the archives, look back at the history of basketball gaming, and indulge in some nostalgia. Check in every Wednesday for retrospectives and other features on older versions of NBA Live, NBA 2K, and old school basketball video games in general. You’ll also find old NLSC editorials re-published with added commentary, and other flashback content. This week, I’m taking a look back at the NBA Live 97 Team Editor.

Once techniques have been discovered in our modding community, we’re usually able to reuse or adapt them as new games come out. The question has always been whether or not the existing tools can still be used, and if not, will anyone be able to update them or create new ones. After all, we have far more modders than programmers in the community, and indeed in recent years, many of our most useful tools have come from elsewhere. This wasn’t always the case, though. Although modders have always outnumbered tool creators, there still used to be a handful of the latter.

Our founders, Tim, Lutz, and Brien, created a bunch of useful tools for editing the PC versions of NBA Live. However, they weren’t the only programmers breaking down the games and providing a means of modding them. Case in point: the NBA Live 97 Team Editor, created by Mark Paris. Although Tim’s editor was more than sufficient for making roster updates for the game, the NBA Live 97 Team Editor was a very handy companion tool. Let’s take a look back…way back…

As I’ve covered in previous Wayback Wednesday features and other articles, we didn’t have the convenience of DBF files until NBA Live 98. Editing the rosters in NBA Live 95, 96, and 97 PC required a combination of modifying the saved roster data file, and the game’s executable. This meant that tool creators had to map the player data stored in the exe file, and figure out a way to change that data via a GUI, without messing everything up. Tim, Lutz, and Brien did just that, and thanks to their efforts and ingenuity, we were able to edit original players, modify the All-Star teams, add bio data for created players, and even change the schedule in Season mode. 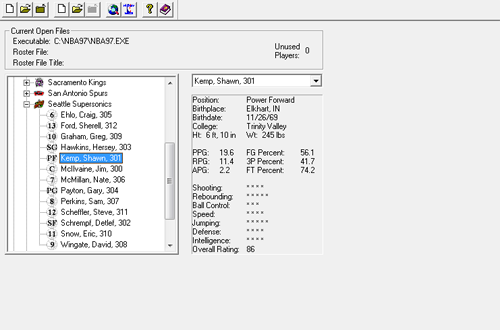 Their work was invaluable in those early years, and went a long way in establishing our modding community. There were a couple of things that they didn’t figure out or find a way to implement in their tools however, and that’s where having a handful of other programmers in the community helped out. For example, Dave Zolnier’s DOS-based editor for NBA Live 96 allowed us to bypass the minimum and maximum height and weight for players. Similarly, Mark’s NBA Live 97 Team Editor included a couple of features that Tim’s editor did not, such as the ability to age players by one year, and edit career statistics. Apart from that, it included similar functionality.

The ability to edit career statistics in particular makes the NBA Live 97 Team Editor stand out. Once again, this was before the use of DBF files, and up until that point, the career stats file was something that had been left alone. Not only could Mark’s tool modify existing players, it could also be used to add career stats to players that didn’t have any. It’s possible to add or delete years from a player’s career stats data, set the teams they played for during a specific year, or completely wipe their stats if you want to overwrite a player with a rookie. This made the tool very useful if you really wanted to go in-depth with the players you were adding to a custom roster.

Being able to increase every player’s Years Pro with a single click was also a useful feature for anyone who continued to update NBA Live 97 beyond the 1997 season. Later utilities such as the NBA Live Toolkit would include the ability to make global edits to just about any data, but the option stood out as being rather unique in Mark’s editor. The tool could also be used to launch the NBA Live Picture Editor (aka PicEd) that Tim and Brien created, if it was present. In addition to being able to load custom roster files, the tool could also display the in-game name of the save, which was quite handy as the raw filenames were simply called roster.000, roster.001, and so on. 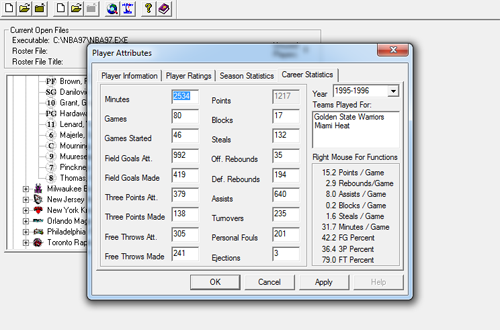 Despite its name, the NBA Live 97 Team Editor is really more of a player editor. It is possible to trade players between teams when a roster save file is selected, and as with Tim’s editor, it can be used to add new players to the All-Star teams. However, there aren’t any functions to reorder lineups, or edit team names and artwork. This certainly wasn’t seen as a drawback at the time, as few roster projects required teams to be renamed. Even with the release of the EA Graphics Editor, art mods didn’t really take off until much later. Even if there was some confusion over the name, it was quickly apparent what the NBA Live 97 Team Editor could do, and how useful it could be.

It’s worth noting that Mark’s tool wasn’t intended to be a competitor or replacement for Tim’s editor; there was no modding arms race, as it were. In fact, there was some amount of cooperation and collaboration, seeing as though they were both skilled programmers who were interested in modding the games, and providing tools so that others could do the same. In recent years, the modding community hasn’t always had that same cooperative spirit, or desire to make tools and mods because it’s a fun and challenging endeavour. Obviously times have changed in terms of having avenues for monetised content, but those old tools – released as freeware, no less – were fantastic.

Of course, those changing times have also played a role in how tool creators have become scarcer. In those early days of NBA Live, PC basketball gaming was even more niche than it is now, to say nothing of the idea of modding the games. The community had more – and I say this with affection because I’d classify myself as one – computer nerds. They were people who enjoyed messing around with computers, people who had learned DOS and how to troubleshoot problems. They were people who were studying IT and learning how to program, and wanted to share what they had made with fellow enthusiasts through the increasingly popular World Wide Web. 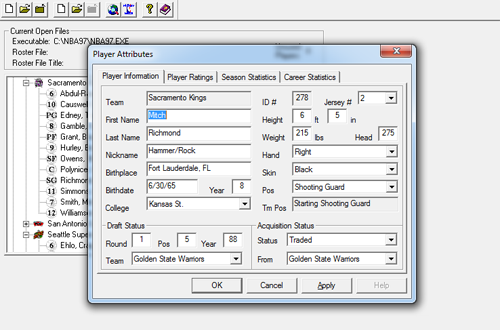 That’s how we ended up with some great tools for games that weren’t quite as modder-friendly as later releases. That’s not to say we don’t have clever and creative people in our community now, and we’re obviously still relatively niche as well. However, as the community and demographic has grown in size, the 1% rule is definitely in effect. The games themselves – aside from being more modder-friendly – also feature more in-game roster editing functions. External editing hasn’t been completely outmoded of course, but many of the basics that we take for granted, such as editing the original players, no longer require unofficial editors. We also have more adaptable tools.

Getting back to the NBA Live 97 Team Editor, it’s got a very appealing aesthetic. The interface sorts players alphabetically by team, with the teams sorted by Conference and displayed in expandable trees, complete with their logos. Functions such as opening up the All-Star editor, editing player attributes, or modifying career stats, can be performed using a right-click. The editor also displays Overall Ratings – which weren’t actually visible in the game – and even the star ratings that appear for each team during the pre-game introductions. It’s elegant, user-friendly, and with a few extra features that the NLSC’s editor lacked, it was a useful tool to have on hand.

With that being said, Tim’s editor also had a couple of features that Mark’s tool didn’t. The NLSC editor was able to create patch files based on changes to the executable, which could then be applied at the user’s end (thus avoiding the need to distribute the modified exe). It could also be used to open the default roster.dat file as well as roster saves, which offered added flexibility. While the NBA Live 97 Team Editor has some nifty features, it’s a shame it doesn’t allow us to decrease the Years Pro for all players at once, as that would’ve been useful for retro projects. Also, just to nitpick, the tool links to the NLSC (albeit with an outdated URL), but refers to us as the “NLCS”. 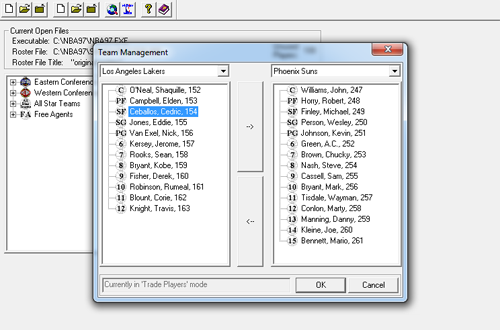 Those are very minor criticisms, though. When used in conjunction with Tim’s tool, the NBA Live 97 Team Editor allowed us to edit pretty much everything we needed to when it came to NBA Live 97’s rosters. It’s remarkably sophisticated for freeware created by one person, and stands as another example of the passion and ingenuity of our community that’s been there since the early days. We still have the editor, and it even works in 64-bit Windows! I’ve said it before, but dusting off old modding tools can be just as nostalgic as firing up the games themselves. With utilities like the NBA Live 97 Team Editor, we were able to do some amazing things with those early titles.