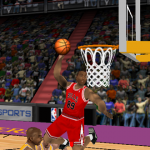 This is Wayback Wednesday, your midweek blast from the past! In this feature, we dig into the archives, look back at the history of basketball gaming, and indulge in some nostalgia. Check in every Wednesday for retrospectives and other features on older versions of NBA Live, NBA 2K, and old school basketball video games in general. You’ll also find old NLSC editorials re-published with added commentary, and other flashback content. This week, I’m offering up some trivia about NBA Live 98 and NBA 2K18.

NBA Live’s hiatus officially ends this week with the release of NBA Live 18. From playing the demo and reading a couple of the early reviews, I would have to say that the game definitely still has room for improvement, but has also made some pleasing strides since its reboot in 2013. I’m quite looking forward to playing NBA Live 18, but the title does make me reflect on how long I’ve been a part of the community. Before I took over the NLSC, I remember visiting it and checking out the news when NBA Live 98 was the upcoming game. By the time the preview season for NBA Live 08 rolled around, I was covering it myself here on the NLSC.

Since NBA Live 18 will be out in a couple of days, I thought it might be fun to look back at the previous two NBA Live games that were set in a season ending in eight. I’ve already posted an in-depth retrospective of NBA Live 98, and one is in the pipeline for NBA Live 08 as well, but these are some quick trivia notes about both games that I hope you will enjoy. With that being said, let’s take a look back…way back…

We’ll tip things off by going back twenty years to NBA Live 98, and a time when NBA Live was the dominant brand in sim basketball gaming. Over the past twenty years, NBA Live 98 and NBA Live 08 have both produced some memorable moments for our community (and seen some fantastic mods), so I hope that you enjoyed this quick look back at some noteworthy trivia for both titles. It remains to be seen whether NBA Live 18 can create some fond memories of its own, and be a big step for a series that has been trying to rebuild over the past couple of generations. We’ll certainly be covering NBA Live 18 and creating content for it here at the NLSC, but through features like Wayback Wednesday, I’ll always enjoy looking back at old favourites such as NBA Live 98 and NBA Live 08, too.

Was it Live 98 or 97 that had two different tv channels broadcasting the game? I think it was TBS and something else and you had different commentatores depending.

NBA Live has never had alternating commentators, though NCAA Basketball 10 did. NBA Live 98 has some NBA on TNT branding and I believe NBA Live 99’s schedule in Season/Multi-Season mode also displayed some network logos for specific games, but it was purely cosmetic.

A few of the early games had TNT branding and Ernie Johnson narrating in the menus, though a lot of games in the series have just had generic EA Sports branding in the overlays and whatnot, up to them getting the ESPN license of course.