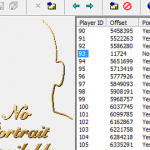 This is Wayback Wednesday, your midweek blast from the past! In this feature, we dig into the archives, look back at the history of basketball gaming, and indulge in some nostalgia. Check in every Wednesday for retrospectives and other features on older versions of NBA Live, NBA 2K, and old school basketball video games in general. You’ll also find old NLSC editorials re-published with added commentary, and other flashback content. This week, I’m taking a look back at the NBA Live Picture Editor, a tool for modding portraits in NBA Live 95, 96, and 97.

For a veteran modder, there’s something really fun and satisfying in breaking out the tools to edit an old game. The nostalgia in doing so is comparable to dusting off an old favourite to play it, as memories of all those hours tinkering come flooding back. I indulged in that nostalgia a month ago when I revamped a couple of my mods for one of my all-time favourite basketball games, NBA Live 96. Although I was satisfied to finally complete some unfinished business, particularly with the Complete Update for the 2001 season, I didn’t have time to do any work on the portraits.

Editing portraits in NBA Live 95, NBA Live 96, and NBA Live 97 is done using a tool called the NBA Live Picture Editor. Co-developed by two of our founders, Tim and Brien, it’s a nifty tool that wasn’t put to use all that often for public releases. As such, it’s somewhat overlooked in the history of our modding community. It’s worth remembering though, so let’s take a look back…way back… 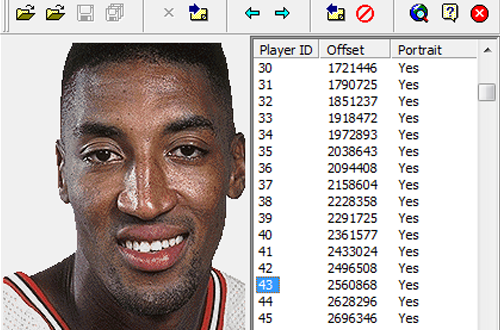 It wouldn’t be much of an editor if we couldn’t use the NBA Live Picture Editor to actually modify the portraits however, and to that end, it includes a few options. It’s possible to export the currently selected portrait, import a new texture to overwrite it, or set it to “No Portrait Available”. The first two options are rather self-explanatory, while the third is an example of saving space within the portrait file. The players that don’t have their own portrait all use the same placeholder portrait, which has its own offset. The NBA Live Picture Editor allows us to change the offset, which means that removing portraits doesn’t require exporting and re-importing the placeholder texture.

This was particularly handy when players were overwritten using the roster editors, a necessity since there was a limited amount of Created Player slots (and none in NBA Live 95). Unfortunately, the function often tends to corrupt NBA Live 95’s portrait files, requiring the less elegant workaround of duplicating Player IDs. This caused issues in Season mode though, so it was customary to release two versions of a roster: one where Player IDs had been reassigned for Exhibition play, and one with incorrect portraits for Season mode. Importing new portraits was the preferable and intended solution, but unfortunately, that too didn’t always work with NBA Live 95’s files.

Even though NBA Live 96 and NBA Live 97’s files were more modder-friendly as far as importing textures or assigning the “No Portrait Available” placeholder, we didn’t see a whole lot of portrait patches for those games. There are a few reasons for that. The first is that the NBA Live modding community (or patching community, as we called it at the time) wasn’t very large, and so the scope of mods was small despite the range of tools at our disposal. The second was the difficulty of working with art files, and portraits in particular were rather fiddly. The third is that most of us were on dial-up connections, limiting the size of files that we could feasibly upload and download. 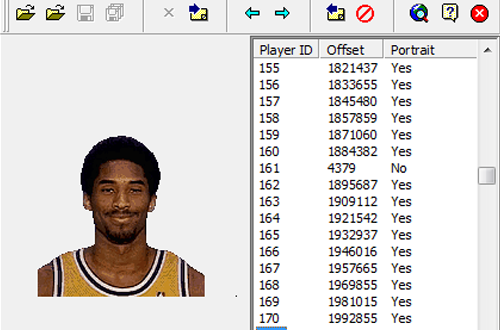 Just as Lutz’s Patcher utility solved the problem of making changes to the game’s .exe file without distributing the executable itself, the NBA Live Picture Editor included a solution for distributing portrait mods. After importing new textures and/or changing offsets to remove portraits, modders can save a DAT file containing the changes that they’ve made. By downloading this DAT file alongside the appropriate bitmap files, the end user only has to run the NBA Live Picture Editor and open the DAT file to apply the changes and automatically import the new textures. Of course, with today’s much faster connections, we’d simply just share the modified portrait file.

Creating the new portrait texture arguably remained a much bigger challenge. These days, we have a couple of viable alternatives to Photoshop and other professional image editing programs that are available free of charge, such as GIMP and paint.net. The absence of such freely available options made it far more difficult to remove the backgrounds all those years ago, and pre-made headshots weren’t easy to find. You had to make sure that you did a thorough job removing the background, as well as saving the texture as the right kind of bitmap. If you didn’t, the background wouldn’t be transparent or may contain artefacts, or the image would simply be low-res.

As a result, not a lot of modders bothered to make use of the NBA Live Picture Editor when it was first released. By the time I came to make the Complete Update for NBA Live 96, NBA Live 2000 was already out. Since it naturally contained portraits for players such as Kobe Bryant, Vince Carter, Tim Duncan, and Allen Iverson, it was possible to export those textures using the EA Graphics Editor, re-size and save them for use with NBA Live 96’s files, and import them using the NBA Live Picture Editor. Although most gamers had long moved on from NBA Live 96 at that point, it was fun to provide a deeper roster update that utilised an often overlooked tool. 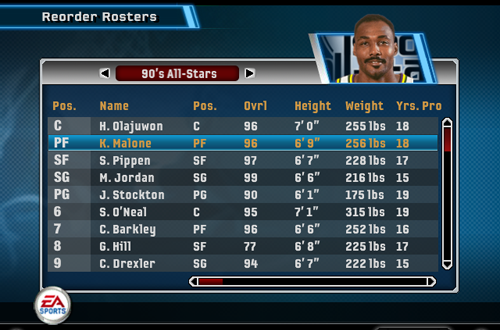 Long after the NBA Live Picture Editor was being used to create new mods for NBA Live 95, 96, and 97, we still found a use for it. As various Legends had to be dropped from the Decade All-Stars and Legends Pool as their deals with EA Sports expired, it fell to those of us making roster updates to add them to the games. Extracting their textures from NBA Live 95-97 provided us with ready-made assets to create portrait patches for NBA Live 2005-08. In some cases, the portraits in which the player was looking directly ahead could even be used to create cyberfaces as well. Just as new assets had been imported into older games, their assets now facilitated retro content.

Some of those portraits may still be useful in modding today, so if you need to poke around in the files from NBA Live 95-97, the NBA Live Picture Editor is available to download here. If nothing else, it deserves to be recognised as a great tool developed at a time when the PC versions of NBA Live still had a ways to go in terms of being modder-friendly. We may not have put it to full use over the years, but it did get a workout for a couple of mods, and let us see data such as Dennis Rodman’s multiple portraits, and the “Error Reading Portrait” texture. Should I do a little more work on NBA Live 96 at some point, it’s another tool that I’ll have to consider dusting off.