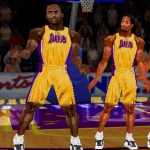 This is Wayback Wednesday, your midweek blast from the past! In this feature, we dig into the archives, look back at the history of basketball gaming, and indulge in some nostalgia. Check in every Wednesday for retrospectives and other features on older versions of NBA Live, NBA 2K, and old school basketball video games in general. You’ll also find old NLSC editorials re-published with added commentary, and other flashback content. This week, I’m taking a look back at the PlayStation version of NBA Showtime: NBA on NBC.

Although I grew up playing both simulation and arcade basketball games, by the late 90s I’d lost interest in the new arcade titles. This was partly due to finding the sim games more appealing, but the arcade genre also seemed to be losing steam. I still loved NBA Jam Tournament Edition and NBA Hangtime, but Acclaim’s NBA Jam games weren’t impressive, and I didn’t keep up with Midway’s titles. It’s unfortunate, because there were some good arcade basketball games being released in between the original classics by Midway, and the launch of EA Sports’ NBA Street series.

The good news is that running Wayback Wednesday features gives me an excuse to track down some old games and check them out all these years later. As I’ve said before, some games are gems, while others were worth skipping the first time around. They’re all fun and interesting to sample though, but the better games always make for more exciting additions to the collection. This week I’m covering a game that I would have liked to have played more of when it was released: Midway’s NBA Showtime: NBA on NBC. Let’s take a look back…way back…

Before we get any further, I do have to address the name. If I ever write a follow-up to my Friday Five on terribly named basketball games, it’s a worthy candidate. It was named after the pregame show that preceded NBA on NBC broadcasts, but it feels like it’s mashing the names of two separate games together. The repetition of “NBA” makes it rather awkward. It wouldn’t be so bad if it were Showtime: NBA on NBC, or if “featuring the NBA on NBC” was a subtitle. Still, it’s fallacious to judge a video game by its cover player or its title, and while NBA Showtime: NBA on NBC does stand out as somewhat of a clunky name, it fortunately isn’t indicative of its quality. 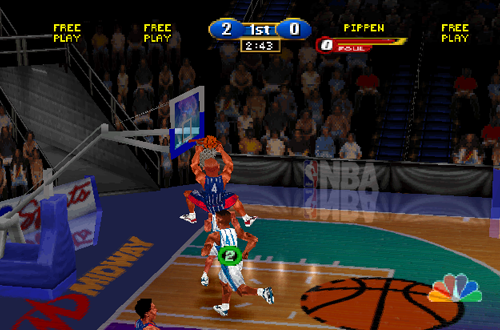 Originally an actual arcade game – the last Midway basketball game to see such a release – NBA Showtime: NBA on NBC is a sequel to NBA Hangtime, and as such, part of the NBA Jam lineage. In fact, it reminds me a lot of Hangtime, from the design of the menus and sound effects, to the animations and gameplay. As noted, I’m playing the PlayStation version of NBA Showtime: NBA on NBC, but it also came out on the Nintendo 64, Dreamcast, and Game Boy Color. Glancing at the reviews, the Dreamcast and Nintendo 64 versions were considered the best ports, with the GBC version ranking as the worst and the PS1 port landing somewhere in the middle.

I can’t make any hands-on comparisons at this time, but looking at videos of the other home ports on YouTube, the PlayStation version seemingly holds its own in terms of its graphics and gameplay. Of course, NBA Showtime: NBA on NBC for PS1 notably has no music during gameplay – apart from theme music at the end of each quarter – and that does detract from the atmosphere somewhat. On the plus side, Tim Kitzrow is back on the call, replacing Neil Funk. Throw in Jim Fagan announcing “This is the NBA on NBC!” on the title screen and the classic theme by John Tesh, and the game will transport a 90s basketball fan and gamer like me back to their childhood!

Gameplay was very similar to NBA Hangtime, though the player models were now fully 3D. I won’t say that the game hit the infamous “Polygon Ceiling“, but like a lot of early 3D games, it hasn’t aged quite as well as its 2D predecessors. A lot of the crazy high-flying dunks also didn’t look right with more realistic body models – well, realistic for the time, anyway – but were still fun. The camera smoothly panned end to end rather than changing angles in dizzying fashion, which put it ahead of some other games such as Acclaim’s NBA Jam Extreme. Indeed, the only time that the camera angle changed was at the conclusion of each quarter, when it circled the players. 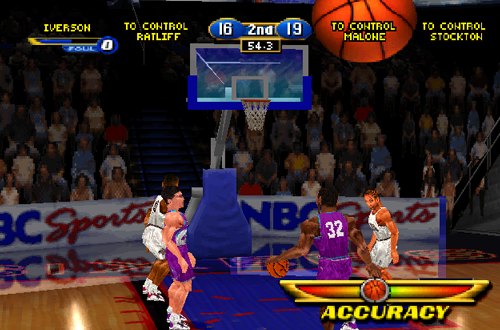 Although the gameplay is reminiscent of NBA Jam and NBA Hangtime for the most part, NBA Showtime: NBA on NBC introduced fouls and free throws, which added a risk/reward factor to shoving opponents to steal the ball. After a team racked up five fouls, they sent their opponent to the free throw line for a shot that counted for three instead of the traditional one point. After that, the foul count reset to zero, allowing another four shoves before giving up a free throw. The free throw mechanic was very simple, comprising of a single bar with a ball bouncing back and forth, with the goal of stopping it as close to the middle as possible; essentially, a simplified T-Meter.

It was an interesting idea that encouraged cleaner play, not unlike the Lottery Pick system that NBA Playgrounds implemented many years later. I have mixed feelings about it, though. Shoving was already balanced through depletion of the turbo meter, and a big part of NBA Jam’s appeal was the absence of fouls and free throws. Having free throws count for three points was overkill, especially as the team got the ball back afterwards. I wouldn’t say it ruined the game, but it didn’t enhance it, either. Obviously Midway were trying to keep the formula fresh by that point, and as I said, it’s an interesting concept. I don’t think it was a great fit for a Jam-style game, though.

Other familiar elements included the ability to get On Fire, dribbling moves that were performed by double tapping the turbo buttons, and alley-oops. The only game mode was the familiar tournament ladder, in which the object was to defeat all 29 teams, with progress saved by entering your initials and a PIN. It wasn’t very innovative, but it did the job as in past games. Create Player also returned from NBA Hangtime. Once again it was tied to your initials, so you always ended up controlling your custom player once they’d been created. There were also a very limited number of heads, and ratings points were earned through winning games and answering trivia questions. 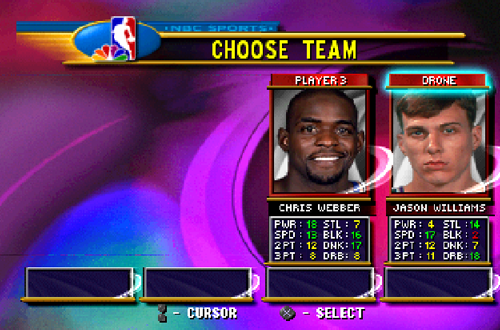 Speaking of ratings, they now used a scale of 1-20, rather than 0-9 or 0-10. It worked well enough with the default players, but it’s kind of an odd scale, and it also meant that created players were very underpowered at first. Another notable departure from previous Midway Jam games was the removal of “tag” mode; the ability to switch control between the two players upon passing. You could still command your CPU drone to pass or shoot, but you could only ever directly control the player you’d selected. It doesn’t bother me too much as I didn’t always use tag mode in those old games anyway, but it was nevertheless unfortunate for those who preferred it.

With the home ports of NBA Showtime: NBA on NBC being released in late 1999, they had some roster oddities. For example, Ron Harper was on the Bulls alongside Will Perdue and B.J. Armstrong; the latter two returned to Chicago that year, while Harper went to the Los Angeles Lakers. Johnny Newman was on the Los Angeles Clippers, but he was traded to the New Jersey Nets before ever playing a minute for them. Eddie Johnson was on the Houston Rockets and Danny Schayes still played for the Orlando Magic, despite both players retiring after the 1999 season. Teams were also uneven, with some squads having up to seven players, while some only had four.

These kinds of roster oddities weren’t uncommon in the NBA Jam games, especially when it came to the home ports trying to account for some new transactions here and there. In a way, it added to their charm. The same goes for the cheat codes that could be entered on the “Versus” screen, similar to NBA Hangtime and Mortal Kombat. Codes unlocked secret players (including mascots, developers, and other characters), an ABA ball, big head mode, special courts, and different uniforms; the usual fare. The arcade version of NBA Showtime: NBA on NBC also included a few “Universal Monsters” such as Frankenstein’s Monster, The Mummy, and The Wolf Man. 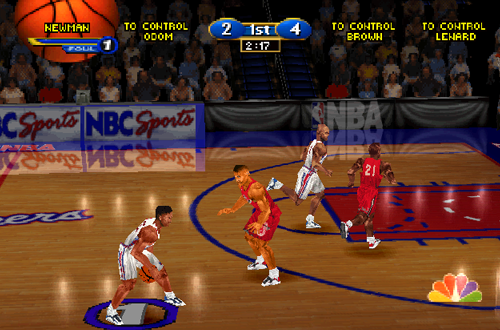 Despite its lack of innovation over its predecessors and a couple of quirky ideas, I’d call NBA Showtime: NBA on NBC a very solid and enjoyable arcade hoops game. The NBA on NBC presentation and return of Tim Kitzrow gave it a great atmosphere, and though the 3D player models weren’t as appealing as the cartoonish style seen in earlier 2D games, they’re not bad. There weren’t many new wrinkles to the gameplay – aside from fouls and free throws, it was virtually identical to NBA Hangtime – but that wasn’t a bad thing, and it’s still fun to play. I had some really enjoyable games when playing it for this retrospective, including an epic comeback to win at the buzzer!

Although the PlayStation port was missing music during gameplay, it otherwise holds its own against any other home port. If you’re looking to add NBA Showtime: NBA on NBC to your collection and you’ve got a PS1, PS2, or PS3, the PlayStation release also seems to be the most affordable version on the second-hand market; especially if you’re not fussy about collecting complete-in-box. All nostalgia aside, I’d probably still rank it behind NBA Jam, NBA Jam Tournament Edition, and NBA Hangtime, but it’s up there. There was a lot of that classic NBA Jam feel in NBA Showtime: NBA on NBC, and as such, it’s a game you can still dust off and enjoy over two decades later.