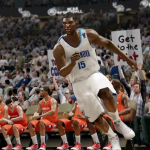 This is Wayback Wednesday, your midweek blast from the past! In this feature, we dig into the archives, look back at the history of basketball gaming, and indulge in some nostalgia. Check in every Wednesday for retrospectives and other features on older versions of NBA Live, NBA 2K, and old school basketball video games in general. You’ll also find old NLSC editorials re-published with added commentary, and other flashback content. This week, I’m taking a look back at NCAA Basketball 10.

As I mentioned when I took a look back at NCAA March Madness 08 and NCAA Basketball 09, it wasn’t until I was gifted a PlayStation 3 that I’ve been able to import college basketball games. I’ve therefore taken the opportunity to seek out and pick up those North American exclusives that I couldn’t play on my PAL consoles. Although they do show their age somewhat, I’ve still really enjoyed finally being able to play them and make up for some lost time. I’ve also picked up College Hoops 2K7 and 2K8, and I’ll be getting to them in due course.

Quite frankly, playing NCAA Basketball 10 all these years later leaves me wishing I’d had a PlayStation 3 back then. I don’t regret opting for an Xbox 360 as it was more affordable and it allowed me to collect the entire NBA Live series on the seventh generation, but even at the time I was envious of PS3 users who were able to import NTSC games. As I was posting news about the game in 2009, I felt wistful that I wouldn’t be able to play it when it came out. I’m making up for some lost time now, but I know I would’ve been able to have a blast with it back when it was new, had I been able to get my hands on it. Like NBA Live 10, it’s a great game for its era. 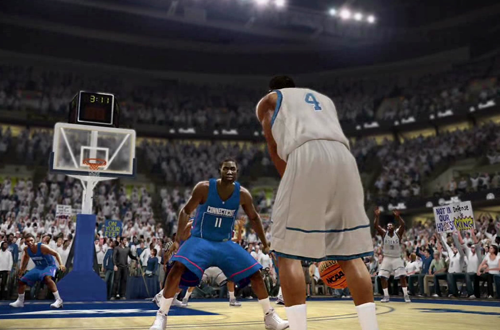 Animation quality and fluidity on the sticks was better than in NCAA Basketball 09, reflecting the jump we also saw from NBA Live 09 to NBA Live 10. It also retained its own mechanics, such as the ability to perform distractions during free throws, and game tempo. Tempo wasn’t pushed as strongly as it was when it was a new feature the previous year, but it still had the same impact as far as boosting abilities when you’re controlling the pace of the game, and leading to poorer play when you’re not. The meter still popped up during gameplay along with coaching tips, though the overlay had been redesigned. It was still an effective mechanic that captured the NCAA style.

The major improvement to gameplay in NCAA Basketball 10 was the introduction of proper motion offense. We still had the ability to manually call plays, but by tapping L1 – the Motion Movement Control – it was possible to run a quick play specific to the team’s motion offense. Villanova Wildcats head coach Jay Wright narrated a tutorial video explaining the basic concepts of motion offense, but with the Motion Control Assistance enabled, a pop-up notification encouraged us to tap L1 to get things in motion. Icons above the players’ heads indicated who to pass to and when, as with full playcalling. It was an elegant system, and worth revisiting in a future NBA Live title. 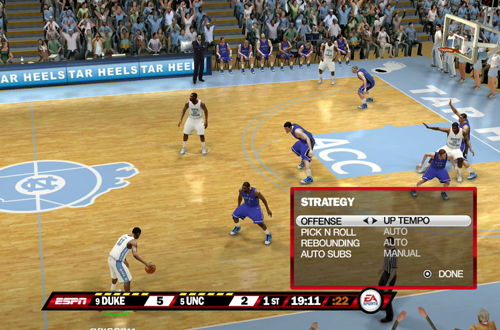 As I said, I wish I could’ve played NCAA Basketball 10 when it was new. It would’ve been a lot of fun switching back and forth between it and NBA Live 10, and both hold up well enough that you can go back and spend time with them today. However, they share some annoying issues. The issue with alley-oop passes being thrown to a player in the midrange resulting in an awkward slow motion layup that ended up plaguing NBA Live 10 was also in its NCAA brethren. There were also some wonky collisions and animations here and there, which are certainly noticeable two generations later. It’s still very accessible and playable though, and still capable of being enjoyed today.

Another major selling point for NCAA Basketball 10 was the authentic presentation for not one but two networks. EA Sports had already established a partnership with ESPN, and this was expanded into full ESPN College Basketball presentation with familiar voices Brad Nessler and Dick Vitale on the call. All of the overlays, music, and other presentation elements replicated an ESPN broadcast down to the last detail. EA also partnered with CBS to incorporate their presentation of the NCAA, with Gus Johnson and Bill Raftery calling those games. In Play Now, the broadcaster was chosen at random. That was fine, though it would’ve been nice to have a choice.

It wasn’t the first time that a basketball game featured authentic network presentation, and it’s obviously since become standard with ESPN in NBA Live. It was far less common to include two networks however, ensuring variety on top of authenticity. Even though Visual Concepts were no longer making college basketball games, it was clear that the team at EA Sports didn’t want to phone things in with NCAA Basketball 10. The gameplay, atmosphere, and presentation were clearly areas of focus, and they delivered a great college basketball experience. Since I’ve mentioned it in previous retrospectives, the MEI Marching Band once again provided a fitting soundtrack. 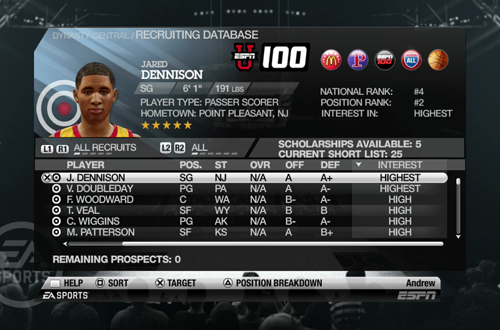 Many of the same modes and features returned in NCAA Basketball 10. Players could be renamed and modified as usual, with a name auto-generation option to save time. The core modes of Dynasty, the NCAA Tournament, and five pre-season tournaments – the Maui Invitational, NIT Season Tip-Off, Old Spice Classic, Anaheim Classic, and Puerto Rico Tip-Off – all returned. Online head-to-head and its spinoff mode Rival Challenge were still included as well. As far as information menus, School Overview returned, but the Blue Ribbon scouting was now replaced by a listing of the Toughest Places to Play. My Highlight Reel returned, but the record books notably didn’t.

Although the same college campus setting had been recycled from the shootaround in NCAA Basketball 09, new face of the game Blake Griffin took Kevin Love’s place. Similar to The Hangar in NBA Live 10, pop-ups provided tips about the new controls. Dynasty was practically unchanged, apart from the addition of the aforementioned Toughest Places to Play screen. It’s clear that innovation was slowing down with Dynasty by that point. That was unfortunate, but I’d suggest that the mode still had enough depth to be engaging and enjoyable. Still, it stands as an example of how EA Sports titles do get complacent when it comes to further innovating with their modes.

There was a new feature in the form of the Dynamic Update Hub. Logging on would provide gamers with the latest Associated Press Top 25 and RPI rankings, as well as team statistics and new plays. These facts and figures would also show up during gameplay with appropriate presentation, and acknowledgement from both the ESPN and CBS commentators. Obviously this feature has long since been discontinued following the servers being shut down, so it’s not something that we can experience now. Of course, judging by some of the reactions to its announcement over on Operation Sports back in 2009, it wasn’t something gamers were clamouring for. 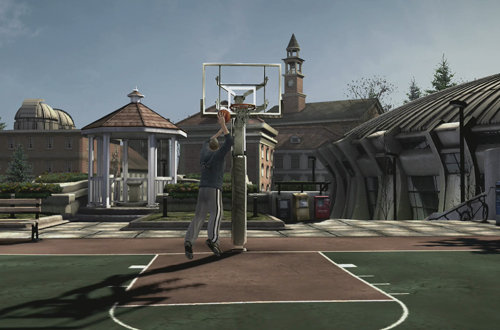 Classic teams were removed in light of Ed O’Bannon’s lawsuit. It’s often claimed that the lawsuit put an end to college sports games, but that isn’t actually the case (no pun intended). It certainly drew attention to issues with college sports titles that have made developers shy away from them, but no one is actually legally barred from making a new college basketball game. Looking back though, I do wonder if EA figured that the writing was on the wall. The lawsuit (understandably) forced them to remove appealing content, and as they couldn’t be sold worldwide, NCAA titles were limited in their ability to generate revenue. They probably didn’t have a huge team or budget.

If so, it would explain a few things about NCAA Basketball 10. The lack of resources would account for the minimal upgrades to modes such as Dynasty. Also, perhaps knowing that it was or very well could be the last game in the series, the team may have wanted to create a product with improved gameplay and impressive presentation, in order to go out on a high note. Admittedly I have the benefit of hindsight here, with no yearly expectations and disappointments at the time, but if those were indeed the circumstances, then I think they succeeded to the best of their abilities. The game was a marked improvement over its predecessor, and still holds up quite well years later.

NCAA Basketball 10 wasn’t the final college sports title by EA Sports, but it marked the end of a series that had officially begun with NCAA March Madness 98, and traced it roots back to Coach K College Basketball on the Sega Genesis. As with the downfall of NBA Live, it’s a shame to see a long-running series come to an end and leave the basketball gaming space. NBA Live is at least in a position to return though, while it seems far less likely that we’ll see another NCAA Basketball. Then again, the return of EA Sports College Football may be cause for hope. If EA does produce a college basketball game once more, it’ll likely be more accessible worldwide, too. 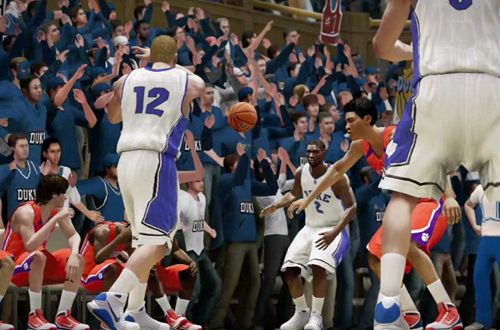 Obviously there are several other games in the NCAA Basketball/March Madness series – as well as college basketball titles from other developers – that I haven’t yet played. I don’t have the hardware to play them all, and even if I did, tracking them down at a fair price isn’t easy. The NCAA Basketball/March Madness and College Hoops series have become sought after collectibles; a complete-in-box copy can easily set you back hundreds of dollars. Sealed copies can fetch even crazier prices! I managed to pick up the college basketball titles that I now own at surprisingly good prices, though they were still more expensive than most other old hoops games.

I’m glad to have found those games and added them to my collection, though. I’d always wished that I could’ve played college basketball games when they were new. Naturally, they have issues of their own, especially borrowing tech from a generation of NBA Live games that were trying to rebuild. However, it’s a different experience when you take NBA players and all the minutia of the league out of the equation, and replace everything with an in-depth representation of collegiate basketball. I’m a fan of gameplay mechanics such as tempo, Motion Movement Control, intensity, and other features that make EA’s NCAA games much more than a re-skin of NBA Live.

When I revisited NBA Live 10 for our 25th Anniversary of NBA Live retrospectives, it struck me that despite its issues, it’s a really good game that holds up respectably well, and one I wish I spent more time with over a decade ago. Having finally played it, I have a similar opinion of NCAA Basketball 10, and wish it had been possible for me to enjoy it back then. With that being said, if there’s one game from the series to dust off and enjoy today, I’d suggest it’s the prime candidate. Don’t expect perfection if you do, but you can expect very solid gameplay, a reasonably deep Dynasty mode, and awesome presentation. I know that I’ll be revisiting it whenever the mood strikes.