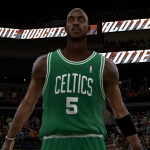 This is Wayback Wednesday, your midweek blast from the past! In this feature, we dig into the archives, look back at the history of basketball gaming, and indulge in some nostalgia. Check in every Wednesday for retrospectives and other features on older versions of NBA Live, NBA 2K, and old school basketball video games in general. You’ll also find old NLSC editorials re-published with added commentary, and other flashback content. This week, I’m taking a look back at some of the unusual Overall Ratings in NBA 2K9.

In the mailbag segment of Episode #354 of the NLSC Podcast, Dee4Three and I talked about bad ratings in basketball video games throughout the years. There are plenty of examples, from odd ratings in NBA Jam Tournament Edition, to the new ratings scale in NBA Live 2004 producing some weird results. Derek brought up the Overall Ratings in NBA 2K9, which is an example I wasn’t too familiar with. NBA 2K9 isn’t a game that I’ve spent too much time with over the years, and when I have fired it up, I haven’t paid too much attention to the Overall Ratings.

Once it was brought up, however, I figured I had to check it out and perhaps discuss it further in Wayback Wednesday. Now that I’ve gone through the rosters, I would agree that there are some weirdly overrated players, considering their performance during the 2009 season, and the way that Overall Ratings above 90 are usually treated (or at least were, several years ago). With so many questionably inflated Overall Ratings in NBA 2K9, it’s worth taking a look back…way back…

Scrolling through the rosters in NBA 2K9, you’ll notice how many players were rated 80+ Overall. This may not seem like a huge problem in and of itself. As I’ve often discussed, Overall Ratings aren’t as important as they seem, as it’s the individual ratings that ultimately govern how players perform. It was also relative when it came to the Overall Ratings in NBA 2K9. With a number of players being comfortably over 90 Overall, a rating of 82-84 was more representative of being a valuable role player than a borderline star. At the same time, the inflation made the ratings feel off, both in terms of optics, and the role that the Overall plays in trade logic in The Association. 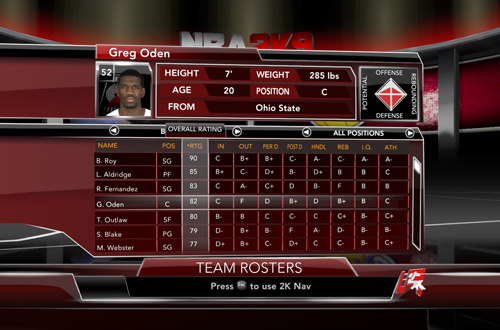 It just doesn’t look right to peruse the rosters and see Greg Oden with a rating of 82, Thaddeus Young with a rating of 83, or O.J. Mayo with an Overall Rating of 86. After all, it led to head-scratching comparisons to Tracy McGrady, rated 87 Overall despite coming off a much better season than any of those other players, and still deserving of good ratings across the board. Steve Nash’s Overall has always been very difficult to manage as his defensive and athletic ratings bring it down, but his rating of 88 feels low when Jose Calderon’s rating was 86. Josh Smith, whose rating was often too high because of his athleticism and dunking abilities, was rated 89 Overall for comparison.

These inflated ratings led to 13 teams having five players on their roster who were rated 80 or higher. A further four teams had four players in the 80s, while two teams had six. This admittedly doesn’t look quite as outrageous when you see some of the 90+ Overall players. Devin Harris was 90 Overall (to Vince Carter’s 89), and stands as just one example of borderline stars or one-time All-Stars that were rated as though they’re among the upper echelon of players in 2009. Deron Williams’ 94 Overall feels exaggerated, and even Chris Bosh was arguably at least slightly overrated at 95. We’re just getting warmed up though, as it’s time to talk about the 99 Overall players.

Kobe Bryant and LeBron James were both rated 99 Overall, which you might feel like arguing against from an historical perspective, but as the league’s two brightest stars and all-time talents, it’s not unreasonable. It’s harder to agree with Dwyane Wade and Chris Paul both being 99 Overall, though. They’re both great players in their own right who will one day be enshrined in the Hall of Fame, but never during the 2009 season – or any point in their careers, to be honest – did they earn the distinction of being rated 99 Overall in a basketball video game. There are a couple of other stars whose 90+ Overall Ratings in NBA 2K9 also feel just a bit too generous. 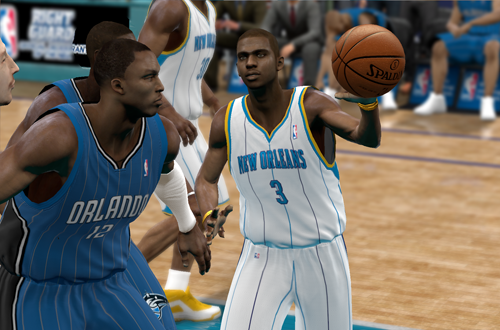 Cover player Kevin Garnett was 97 Overall, which would’ve been appropriate a few years earlier, but wasn’t entirely appropriate for his production at that point. The same goes for KG’s long-time rival Tim Duncan. The Big Fundamental was still an All-Star who was putting up numbers, but he was beginning to take a backseat to Tony Parker, which made his rating of 98 slightly questionable. Parker himself was rated 90, as was Manu Ginobili. This made the San Antonio Spurs the only team to feature three 90+ Overall players. Jason Kidd’s 92 rating is another one that feels like it was a few years too late, especially since it’s only a point behind Dirk Nowitzki and his 93 rating.

Dwight Howard’s rating of 98 was also overly generous – even for a rising star at the time – and the same could be said of Al Jefferson (91) and Andris Biedrins (87). It’s always difficult to rate players who are coming off injury-plagued seasons, as it’s yet to be determined how productive they can still be. On that note, Gilbert Arenas’ rating of 94 isn’t absurd in comparison to other players, though it was still an example of how ratings in general were overinflated. Amar’e Stoudemire (94) and Yao Ming (93) are likewise players who should’ve been rated among the best in the game and thus are ranked properly, but demonstrate how Overall Ratings in NBA 2K9 were boosted.

Alright, so we’ve established that many of the Overall Ratings in NBA 2K9 didn’t look quite right. Role players had ratings that are normally given to stars, leading to stars also having higher ratings than we’d normally expect, and a few more players in the 97-99 range than is normally ideal. Once again though, Overall Ratings aren’t as important as individual ratings. Of course, an Overall Rating that seems way off is usually an indication that a player isn’t appropriately rated in certain areas. On the other hand, it may be the result of the way a specific game calculates Overall Ratings. So, what’s the deal in NBA 2K9? Are they errors, or is the formula the problem? 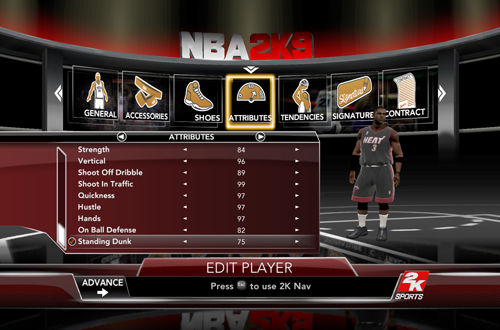 Investigating the ratings for a number of players with inflated Overalls, it appears that several of their attributes were exaggerated. Whomever was in charge of the rosters at the time was quite cavalier about giving out ratings in the 90s. Several stars have a Stamina attribute that’s maxed out at 99. Astonishingly, Dwyane Wade has a Blocking rating of 97! Admittedly he’s one of the best shot-blocking guards in league history, but he averaged 0.7 blocks per game in 2008, and 1.3 per game in 2009; numbers that don’t quite justify such a high rating. Several players are overrated in Offensive and Defensive Awareness, as well as in the areas of Speed, Shooting, and Dunking.

It’s possible that the formula for Overall Ratings in NBA 2K9 is also imperfect, but most likely, it’s just the subpar effort with player ratings. Interestingly, other games from around that time don’t have the same issue with wild exaggerations. That’s not to say that there aren’t inaccuracies, but the results aren’t quite as strange. Also, to put it in an historical perspective, most of the Legends in the All-Decade teams are rated 99 Overall, which is itself an exaggeration. The lowest-rated historical player is Dan Majerle at 79, which looks silly when inferior active players are in the mid 80s. Not to be rude, but it really seems as though not a lot of care went into the rosters that year.

Of course, as recently discussed, inaccurate ratings, tendencies, and even animations, are a recurring problem in NBA 2K that’s all too often overlooked. NBA 2K9 is on another level, though. The inflated Overall Ratings are just the tip of the iceberg, as once you start looking at the individual attributes, the root of the problem is clear. Whether it’s going crazy representing the abilities of superstars, failing to recognise that certain stars are beginning to fade, or beefing up the ratings of role players to compensate (as well as to facilitate trades in The Association), there are a myriad of inaccuracies. It’s apparent with a cursory glance at the rosters, let alone a deep dive. 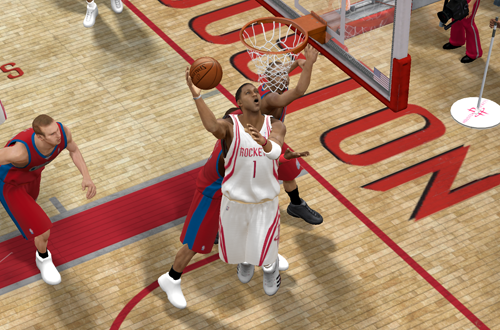 Funnily enough, NBA 2K9 did introduce the concept of Living Rosters to the series. On top of keeping the lineups up to date, the mysterious NBA 2K Insider was – to quote the linked IGN article – “working behind the scenes, pouring (sic) over the stats and spreadsheets”, being the one “ultimately responsible for the content and accuracy of the Living Rosters updates”. At this point, I’m far too late to be able to download any official updates, but suffice to say, the ratings out of the box did not represent the care and accuracy that was advertised. NBA 2K9 outsold NBA Live 09 and had better reviews, but NBA Live 09 did a superior job with its rosters and Dynamic DNA.

There are probably times when we’re too harsh on the default rosters in basketball video games, not to mention egotistical about our ability to do better. As noted by former NBA Live developer Rod Reddekopp when I interviewed him, there were gamers who wouldn’t even touch those earlier NBA Live games until Tim and Lutz released their roster updates on the NLSC! Needless to say, perfection is a very high bar, and it’s a rare roster – official or unofficial – that doesn’t include a single mistake or oversight, or questionable rating. Having said that, however, something definitely went awry in NBA 2K9’s rosters, and the Overall Ratings were only the beginning.