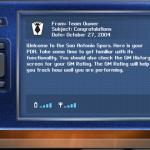 This is Wayback Wednesday, your midweek blast from the past! In this feature, we dig into the archives, look back at the history of basketball gaming, and indulge in some nostalgia. Check in every Wednesday for retrospectives and other features on older versions of NBA Live, NBA 2K, and old school basketball video games in general. You’ll also find old NLSC editorials re-published with added commentary, and other flashback content. This week, I’m taking a look back at the PDA feature in NBA Live’s old Dynasty modes.

I’m keen to see NBA Live flesh out its franchise mode experience again. Not only is it a necessity as far as delivering a well-rounded game, but I’ve spent many, many fond hours with Franchise and Dynasty modes in older NBA Live titles. NBA Live was the first basketball game with an in-depth multi-season mode, and it continued to expand through its revamp into Dynasty. NBA 2K has obviously taken the experience much further with Association, MyLEAGUE, and MyGM, but during NBA Live’s strong run back in the mid 2000s, many of us were really enjoying Dynasty’s advancements.

Of course, not every new idea was a good one. The revamp into Dynasty mode took away the ability to control more than one team, and some of the staff development mechanics over the years have felt more video game than sim. However, perhaps the most problematic and annoying feature was the PDA, which made its debut in NBA Live 2005’s Dynasty mode. As with most other concepts that didn’t pan out, it did have some merit, but the drawbacks outnumbered or outweighed the benefits. Let’s take a look back…way back…

For those unfamiliar with what a PDA is, a personal digital assistant is basically the forerunner to smartphones. They could be used to send and receive messages as well as browse the Internet, and some also had telephone functionality. On the surface, a PDA doesn’t have a lot of relevance to a basketball video game, but as a messaging device, it’s a concept that can be adopted as part of the user interface to create a more interactive and immersive experience. In that regard, it’s similar to pulling out your smartphone in MyCAREER to team up as a squad, invite friends to join you in your Neighborhood, or play the daily trivia game. You were the team’s GM, with a PDA. 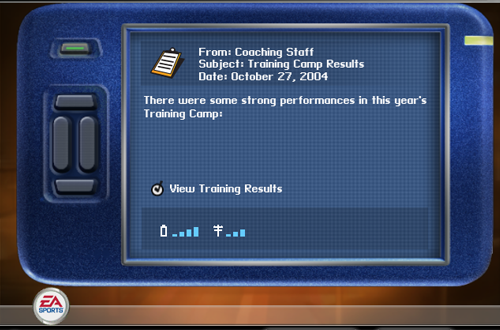 This introduced a new level of communication within the game, a sense that you were interacting with the virtual NBA of Dynasty mode. The team owner would message you, expressing their support and encouragement when everything was going well, or chewing you out when the team was losing and you weren’t handling your duties. The CPU-controlled teams would message you with trade offers, as well as respond to any offers that you made. Free agents would communicate through their agents, accepting and declining contract offers with remarks about the fairness of the deals. It was also where you’d receive bulletins about award winners and other league news.

In theory, it was a fun way of handling the experience of being a virtual GM, as well as pushing through news and information as the season progressed. With that in mind, the idea wasn’t a complete flop. I do remember franchise gamers liking the PDA at the time, as it did add some more depth despite being a very simple concept. I also found the PDA appealing at first for that added touch of immersion and a feeling that I was actually interacting with the players and GMs, but like many of my fellow Dynasty mode enthusiasts, I came to dislike the drawbacks that presented themselves. In our Wishlists, we came to ask for the PDA to be revamped or removed completely.

What were those drawbacks? Let’s begin with the messages from the team owner. In short, they basically came in two flavours: gushing praise, or terse, angry scolding. It could be suggested that this isn’t an altogether unrealistic depiction of the relationship between some NBA team owners and their front office staff, but it felt very limited and repetitive, what with every virtual owner in Dynasty mode having the same kind of personality. There were also ridiculous messages, such as suggesting you’d done a terrible job in putting together a team that lost in seven hard-fought games in the NBA Finals. Frankly, the owner’s messages often just came across as whining and nagging. 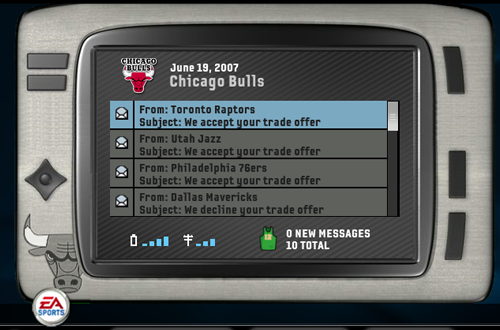 A much bigger problem was the way that the PDA affected the mechanics of making trades and signing players. After making an offer, you’d usually have to wait for a couple of days, advancing through the schedule and sitting tight for a reply one way or the other. This wasn’t so bad if a free agent agreed to sign or a team accepted your trade offer, but if they didn’t, it was a couple of days wasted. On one hand, there was a certain amount of realism to this as not all deals are done immediately. On the other hand, it didn’t quite represent the negotiation process with ongoing conversations and communication in real-time. It certainly didn’t make things easy at the trade deadline.

As for incoming trade offers, you had to be quick about responding to them, or teams would pull their offer. Again, this wasn’t completely unrealistic as NBA teams do take deals off the table if their potential trading partner can’t make up their mind in good time, but it felt ridiculous to miss out on an offer due to an overlooked text message. Although the PDA was a creative way of pushing through information, it was still too easy to miss messages, or for users to ignore it altogether. This was especially true for the league announcements such as the list of retired players, as well as the option to retire a player’s jersey number, which came through the PDA rather than a pop-up.

The developers were clearly aware of the issue, as it was a driving force behind the “push” approach to Dynasty mode in the Xbox 360 and PlayStation 3 version of NBA Live 08. Trade and free agent negotiations were now performed in real-time, with no need to advance a few days just to hear back about your offer. More information was made readily available to gamers without having to dig through all the menus, though notifications could be disabled and tasks automated as desired. There was no pointless nagging from a virtual owner, either. Essentially it was achieving what was intended with the PDA, without all of the cumbersome and annoying mechanics. 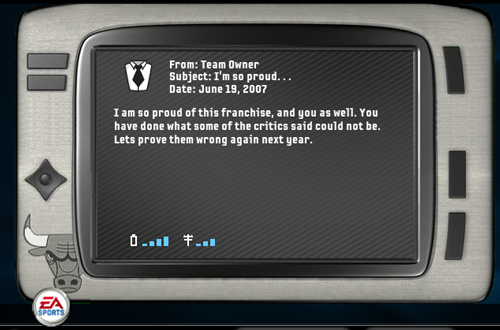 Unfortunately, the prior gen version – from which the PC version was ported – kept the PDA interface in Dynasty mode, and didn’t adopt many of the other features from the “push” approach. While the presence of the PDA didn’t prevent me from having one of my all-time favourite basketball gaming experiences with my NBA Live 06 Dynasty, I had definitely soured on the function by that point, and it remained one of my least favourite aspects of the mode. I’d suggest that’s a popular opinion these days, as not many people defend it when it’s brought up, or suggest it as one of the features that should return in a deeper, revamped Franchise mode in future NBA Live games.

It’s a shame, because there were some good ideas with the PDA. Interacting with a virtual owner is a concept that 2K has put to great use with MyGM, and both games have experimented with some kind of negotiation mini-games for free agency in their franchise and career modes alike. Subsequent games have aimed for an increase in the amount of interactivity, and tried to build game worlds for the virtual NBA. The PDA could’ve worked a lot better if it hadn’t been relied upon so heavily to push through information, or if it hadn’t eliminated the concept of real-time negotiation with free agents and other GMs. Handled a little better, it would be more fondly remembered.

To that end, its legacy is similar to features like Freestyle Superstars: a commendable idea that ultimately didn’t pan out, but it introduced concepts that could be reworked into successful staples of basketball gaming. It deserves credit for being creative and paving the way for similar functions in its successors, but also stands as an example of what not to do with a franchise mode’s interface and mechanics, as well as the need to make the appropriate adjustments year to year. Had the PDA been improved upon in NBA Live 06, it may have remained a part of the mode’s interface and evolved into something better. As it stands, we can appreciate the good points, but it needn’t return.