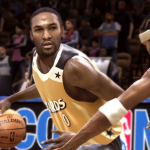 This is Wayback Wednesday, your midweek blast from the past! In this feature, we dig into the archives, look back at the history of basketball gaming, and indulge in some nostalgia. Check in every Wednesday for retrospectives and other features on older versions of NBA Live, NBA 2K, and old school basketball video games in general. You’ll also find old NLSC editorials re-published with added commentary, and other flashback content. This week, I’m taking a look back at Quick Strike Ballhandling, also known as Quick Strike Ankle Breakers.

I don’t think it’s an exaggeration to call right stick dribbling controls one of the biggest, best, and most important advancements in basketball gaming. Although we were able to perform crossovers, spins, and other dribbling moves before Freestyle Control made its debut in NBA Live 2003, we were at the mercy of a button press as far as the specific move that was performed. Not only were we in complete control with Freestyle, we could perform moves on command that would’ve been far harder to implement using the old approach of face buttons for random dribbling moves.

As the years passed, EA Sports expanded on their player control concepts with ideas such as Freestyle Superstars, eventually dubbing their control scheme Total Freestyle Control. In the Xbox 360 and PlayStation 3 version of NBA Live 08 however, the controls were revamped once again. Freestyle Superstars was replaced by Go-To Moves, shooting went back to two buttons (a jumpshot and a combined dunk/layup button), and the dribbling mechanics were now called Quick Strike Ballhandling. Although it was a familiar system, it was more than just a new name. Let’s take a look back…way back…

On the surface, Quick Strike Ballhandling probably struck a lot of gamers as a mere rebranding of an existing concept and technology. After all, dribbling moves were still performed with right stick movements that were similar to Freestyle Control and the basic concept of the direction of the right stick corresponding to the player’s hands and backward and forward movement remained unchanged. However, Quick Strike Ballhandling introduced new, or at the very least refined, technology. If you played NBA Live 07 and NBA Live 08 on Xbox 360 back to back, you’d notice a difference in both the way the players moved, and how performing dribbling moves felt. 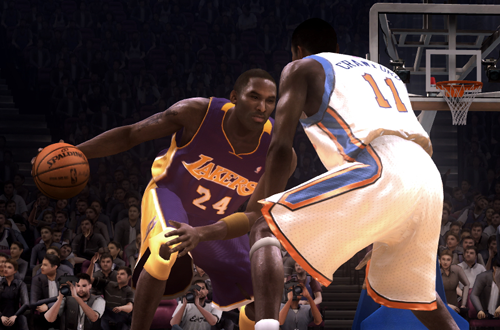 The new tech allowed us to break out of animations to pass or shoot, which was a big improvement. Although Freestyle Control had revolutionised dribbling controls, it had begun to show its age and limitations with the way players would get stuck in animations that had to play out. That was much less of an issue with Quick Strike’s tech, which was intended to allow us to better chain together moves and respond to the action quicker, no longer missing out on opportune moments to shoot, pass, or make a move while waiting for an animation to finish. Although the animations and the animation branching did have their issues, at the time it felt a lot smoother.

Another impressive feature of Quick Strike Ballhandling was its ability to recognise rapid stick inputs. Under Freestyle Control, moving the right stick back and forth at a fast pace made no difference to the crossover being performed. With Quick Strike, continuing to rapidly move the stick back and forth resulted in the player performing increasingly faster crossovers. Slow down the right stick movement, and the pace of their dribbling also decreases. This made dribbling feel more dynamic and responsive compared to NBA Live 07. The increase to 60 frames per second was obviously also a factor there, but Quick Strike Ballhandling contributed to a feeling of smoothness.

Although Quick Strike Ballhandling introduced new contextual animations, we still had control over what a player was doing, and some nifty moves to perform. My favourite move, that I was introduced to at the NBA Live 08 Community Day, was the half/fake spin. It was a move that we’d never really been able to perform in previous games, and for the time, it looked and felt really good. It was performed by holding up on the right stick rather than just tapping it for a regular spin move, which was simple and elegant. At the advice of NBA players that the developers spoke to, Quick Strike also captured a lot of subtle moves, such as faking picking up a dribble. 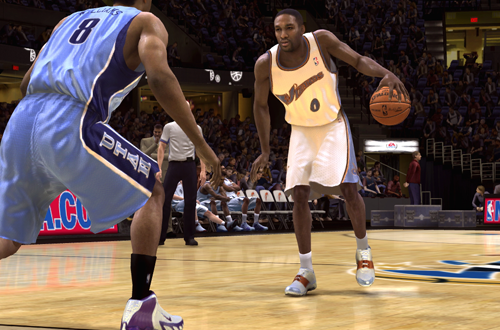 In NBA Live 09, Quick Strike Ballhandling evolved into Quick Strike Ankle Breakers. Once again, this was another step forward in dribbling controls, not just a catchy rebrand for the sake of marketing. Ankle Breakers added stationary dribbling moves, which were essentially the forerunner to the Size-Ups we saw in NBA Live 10 and most of the NBA Live (and NBA 2K) titles that have followed. By holding Sprint and flicking the right stick, players could perform an Ankle Breakers move, and then explode out of it with a push of the left stick to the right, left, or forward. Regular dribbling moves were still performed with the right stick as in previous games.

Just as Quick Strike Ballhandling was intended to push dribbling controls forward by allowing gamers to better string together moves, Quick Strike Ankle Breakers was intended to give dribbling moves purpose. In pre-release interviews, developers spoke of the “game within a game”; the process of actually trying to break down a defender and put them off-balance, rather than execute fancy dribbling moves and break ankles without a real battle. On the other side of the ball, the Lockdown Defense mechanics were the counterpunch to Quick Strike moves, with an emphasis on anticipation and proper movement to stay with ballhandlers and steer them away from the basket.

Incidentally, the tech for breaking out of animations and stringing them together was borrowed from NBA Street Homecourt, released earlier in 2007. Just as the tech had allowed tricks to be strung together into combos in Homecourt’s arcade gameplay, it was also effective in a sim environment. This wouldn’t be the last time that an EA Sports basketball game would benefit from sharing tech with another title. The Real AI that made NBA Jam: On Fire Edition one of the best arcade hoops games actually originated in the Fight Night series. EA’s IGNITE engine, which current gen NBA Live runs on, has also previously been used for other series during this generation. 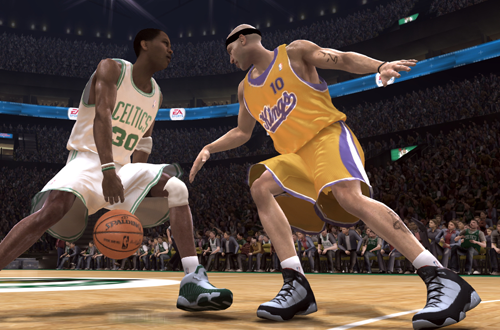 Continuing to enhance and evolve the dribbling mechanics remained a goal of the development team. As I noted, Size-Ups were introduced in NBA Live 10, with very similar mechanics to the Quick Strike Ankle Breakers in NBA Live 09. However, as confirmed by Mike Wang – then in the second year of a brief stint at EA Sports – no Quick Strike animations were reused in NBA Live 10, with brand new animations (including signature styles) being added. Interestingly, previews still referred to the dribbling moves as “quick strike moves”, though the name wasn’t used in the official features list or promotional information on the back of the NBA Live 10 box.

The attempted revamp of the controls in NBA Elite 11 put an end to the approach that had begun with Quick Strike Ballhandling in NBA Live 08. Recent NBA Live games have borrowed concepts from previous titles, including the size-ups and stationary dribbling moves seen in NBA Live 09 and NBA Live 10. The game has notably gone back to the Freestyle branding for its player control mechanics, despite once seeing fit to retire the moniker. Personally, I believe that was a good move. While Quick Strike Ballhandling and Quick Strike Ankle Breakers introduced some great ideas and tech, Freestyle is the better name, and has a longer history within the NBA Live series.

Despite NBA Live’s struggles over the past two generations, one aspect of the game that is frequently praised is its dribbling. As I’ve said before, it speaks volumes that NBA 2K eventually aped its controls. Being the innovator of the concept, NBA Live has refined it over many years. There are some aspects of Quick Strike Ballhandling that I’d like to see return though, from the smoothness and responsiveness to faster crossovers with rapid stick movement. They were big steps forward and arguably ahead of their time. Regardless of what the controls have been named and irrespective of any other issues the games might have, NBA Live has long had handles for days.