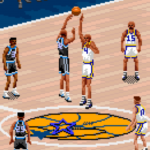 This is Wayback Wednesday, your midweek blast from the past! From retrospectives of basketball games and their interesting features, to republished articles and looking at NBA history through the lens of the virtual hardwood, Wednesdays at the NLSC are for going back in time. This week, I’m taking a look back at the rosters in both versions of NBA Live 95.

The interactive almanac aspect of basketball video games doesn’t begin years later when we start going wayback. Sure, that’s when we’re reminded of strange stints, forgotten returns, and other roster trivia. However, from the moment a basketball game becomes one of our favourites and we spend countless hours with it, its rosters are intertwined with our fond memories on the virtual hardwood. We remember the players on the team that we played with most often, as well as the players on the opposing squads that we faced in our most memorable, challenging, and epic games.

Those memories come flooding back when we revisit a title. However, depending on whether you spent time with the PC or console version of NBA Live 95 – or indeed, if you played both – you’ll recall two very different rosters. While the console version of NBA Live 95 featured final 1993-1994 season rosters, the PC release was updated to include the Class of 1994 rookies, as well as player movement accurate as of February 1995. As such, each captures its own snapshot of a memorable era in NBA history. Let’s take a look back…way back…

Not only are the rosters in the console version of NBA Live 95 a throwback to the NBA of yesteryear, but also the original approach to basketball video game design. Again, while it may ostensibly be set in the 1995 season, its rosters are from 1994. These days, we’re accustomed to the year in the titles of NBA video games reflecting the current season du jour, and all of the roster updates that entails; NBA Live 2000 was updated for the 1999-2000 season, NBA 2K6 for 2005-2006, and so on. In EA Sports’ NBA Playoffs series however – and subsequently the console version of NBA Live 95 – the year of the season was updated, but we played it with last year’s rosters. 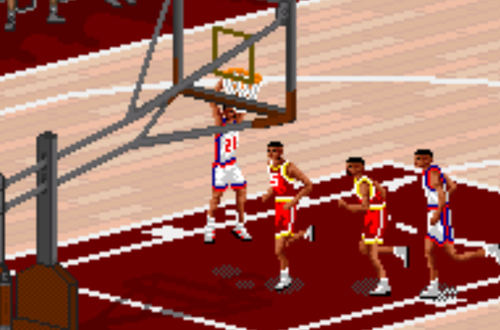 While comprehensively updating games for the forthcoming season that they were set in was obviously the right move, those year-out-of-date rosters didn’t spoil those old games at the time. In the case of the console version of NBA Live 95, the approach has also preserved some interesting lineups from the 1994 campaign. Even with the limitations of a 12-man roster with no inactive list, some noteworthy stints are still accounted for. Let’s begin with Dominique Wilkins’ half season with the Los Angeles Clippers. The Dominique Wilkins for Danny Manning swap is one of the weirdest trades in NBA history, and it was captured in the rosters of NBA Live 95 on console.

Other obscure stints include Eddie Johnson’s lone season with the Charlotte Hornets, before he played a year in Greece. There’s 1989 Slam Dunk Champion Kenny “Sky” Walker’s comeback with the Washington Bullets, after he returned from playing in Europe. Sean Elliott’s one-year excursion with the Detroit Pistons is also captured in NBA Live 95’s rosters, along with Dennis Rodman’s first year in San Antonio. Rookie Chris Webber is on the Warriors, a sight unseen again on the virtual hardwood until his return stint in 2008. Fellow freshman David Wesley, who went on to have more success with the Celtics and Hornets, makes his first and last appearance on the Nets.

A number of players had their swansong in 1994, and those final seasons can be seen in the rosters of NBA Live 95. There are Showtime members James Worthy and Kurt Rambis in Los Angeles, and Brad Daugherty and Larry Nance in Cleveland. There’s Fat Lever’s comeback and retirement tour with the Mavericks. LaBradford Smith – he of the infamous game against Michael Jordan – can be found on the Kings’ bench. A handful of other players are donning their teams’ jerseys for the final time, including Horace Grant and Bill Cartwright in Chicago, and Robert Parish in Boston. A notable exception is Bill Laimbeer, as he’d retired from the Pistons in November 1993. 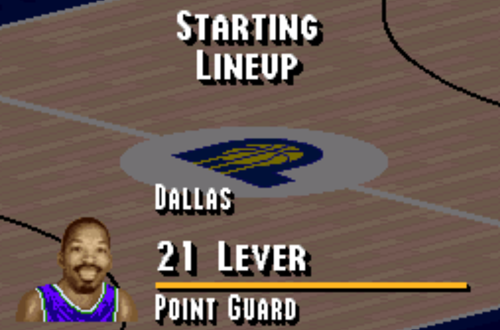 Elsewhere however, the developers did take some liberties with inactive players. Tim Hardaway missed the 1994 season with a knee injury, but was too big of a name to exclude. Rookie Bobby Hurley, sidelined after a near-fatal car accident, was added as the 12th man on the Kings. In other cases, absences led to unlikely inclusions. Skeeter Henry played sparingly in just four regular season games and three Playoff games for the Suns. With Charles Barkley unable to appear, there was a roster spot to fill. In a similar vein, Richard Petruska is on the Rockets, despite not being a member of their Playoff roster in 1994. As such, they likely had better runs on the virtual hardwood!

Browsing the NBA Live 95 rosters – which involves loading into a game to see the complete lineup – I’m reminded of other noteworthy stints and memorable teams. Veterans Orlando Woolridge and Tom Chambers shore up the bench in Philadelphia and Utah respectively. Moses Malone also returns to Philly for a second stint. Kevin Brooks and Darnell Mee – mainstays of the NBL here in Australia – are together on the underdog Nuggets squad that upset the SuperSonics. Dale Ellis on the Spurs, Chuck Person on the Timberwolves, Derrick Coleman and Kenny Anderson in New Jersey…even bench players like Greg Graham and Rich King bring back memories!

Although my basketball fandom wasn’t quite in full swing until a couple of years later, playing NBA Live 95 on Super Nintendo retroactively gave me quite an affinity for the 1994 season. It’s ironic given that I’m a Chicago Bulls and Michael Jordan fan, but it was undoubtedly a memorable year in the NBA. Looking back now, it’s fun to see some familiar faces in strange places, players in their final years with the teams they played a bulk of their career with, and the last season for some big names. By featuring 1994 lineups, NBA Live 95 included some players who otherwise wouldn’t have had any appearances in the series while they were still active in the league. 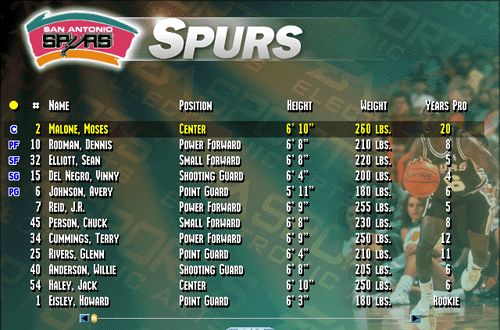 How about the rosters of NBA Live 95 PC? As I mentioned, they were updated for the 1995 season, establishing a new approach for future games; the 16-bit versions of NBA Live 96 not withstanding of course, owing to the 1995 lockout. Once again, there were only twelve players per team, with no inactive roster. On top of Charles Barkley being absent, David Robinson had to be removed due to being the face of NBA Action ’95. Moses Malone, in his final year in the league, stood in for him as the starting centre for the Spurs. The rosters were finalised before MJ’s comeback, though EA likely wouldn’t have been able to include him even if the timing had been right.

As I’ve discussed before, since I played NBA Live 95 PC after NBA Live 96 PC, there was a weird familiarity when I browsed its rosters for the first time. The menu layout is virtually identical, but on top of a different colour scheme, the lineups I saw had some notable differences from the ones I’d scrolled through so often in NBA Live 96. It begins, quite literally, with seeing Alaa Abdelnaby atop the Players screen. He was out of the league by the end of the season, but I recognised his name from cards and Microsoft Complete NBA Basketball. Revisiting the rosters of NBA Live 95 PC today, the snapshot of the league reminds me of other interesting and forgotten stints.

Whereas the console version brought us Dominique Wilkins’ half season with the Clippers, the PC release features his single season with the Boston Celtics (albeit using a Hawks portrait from 1993). Sleepy Floyd, who still holds the record for most points in a single quarter (29) and half (39) of a Playoff game, is winding down his career on New Jersey’s bench. Bill Cartwright’s final year in Seattle – a forgettable stint indeed – is also represented. Sam Bowie’s career is on its last legs with the Lakers. A number of journeymen and role players from the 80s also make their final appearances, such as Jim Les (Hawks), John Battle, and Tony Campbell (Cavaliers). 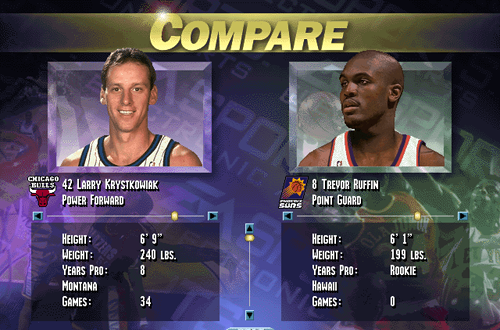 Of course, some teams have a very familiar core, thus their rosters are similar to NBA Live 95 on console, and NBA Live 96 PC. There are many familiar faces on the Bulls, Magic, Knicks, SuperSonics, and Spurs, just to name a few. It’s a reminder of how many teams fielded familiar lineups – but for a player or two – for many years on end. The league’s top players are where they were the previous season, and where they’d be the next year, too. It makes moves such as Horace Grant to the Magic and Mark Jackson to the Pacers, Sean Elliott’s return to the Spurs, and the trades of Clyde Drexler, Otis Thorpe, Kevin Willis, Steve Smith, and Grant Long, really stand out.

Speaking of Drexler in Houston, as I’ve recalled in other features, he’s coming off the bench. This captures a very specific moment in time, as The Glide didn’t start in his Rockets debut, but started every other game he played for them thereafter. The Class of 1994 rookies stand out, with the likes of Grant Hill, Jason Kidd, Glenn Robinson, Eddie Jones, Jalen Rose, Donyell Marshall, Juwan Howard, and Brian Grant being a mix of future stars and noteworthy names. Meanwhile, players like Trevor Ruffin and Larry Krystkowiak bring back memories, as they were often replaced with Charles Barkley and Michael Jordan respectively in modded rosters for NBA Live 95 PC.

The mere fact that you can browse the rosters in NBA Live 95 PC without loading into a game, as well as make changes outside of Season play, demonstrates the major advancements that the PC version made over the console releases. The ability to trade any player in the game doesn’t sound exciting now, but at the time, that was a selling point! For those of us who really got into the NBA when Michael Jordan made his comeback, the 1995 season rosters of NBA Live 95 reflect some of our earliest NBA memories. Ironically we can’t enjoy that comeback without the aid of modding, but many of the lineups are nevertheless ones I picture when someone says “90s NBA”. 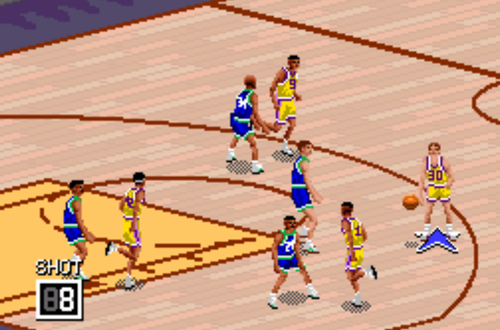 Not to belabour a point, but this is why I’ve come to refer to old basketball video games as interactive almanacs. As much as I enjoy playing them, sometimes it’s just fun to fire them up and browse the rosters. It doesn’t just bring back memories of playing the game for hours on end, but of watching games on TV, buying trading cards, and reading magazines cover to cover. Just as NBA Live 2002‘s rosters remind me of adjusting to a changing NBA, revisiting NBA Live 95 always reminds me of falling in love with basketball and hoops gaming. There are many games that I enjoy revisiting, but NBA Live 95 always takes me back to the earliest days of my fandom.