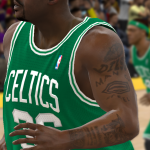 This is Wayback Wednesday, your midweek blast from the past! From retrospectives of basketball games and their interesting features, to republished articles and looking at NBA history through the lens of the virtual hardwood, Wednesdays at the NLSC are for going back in time. This week, I’m taking a look back at the history of Shaq and his Superman logo tattoo in basketball video games.

Not only is Shaquille O’Neal one of the greatest players in the history of basketball, but he’s one of the most prominent faces in basketball video games. By virtue of a 19-year NBA career and the inclusion of historical content, Shaq has appeared in at least one video game every year going back to 1993; a streak that rivals his “teammates in the NBA Finals” record! Of course, when it comes to depicting the Diesel in video games, accuracy demands that he’s sporting his ink. On that note, as you’re probably aware, Shaq has a prominent tattoo of the Superman logo on his left arm.

As the detail on player models improved, virtual Shaq likewise began sporting his Superman tattoo; or did he? As RayRay_953 pointed out in the Forum, there’s an interesting history with Shaq’s ink and its appearance in basketball video games over the years. Certain games have achieved a degree of accuracy with the tattoo, while others have taken some creative liberties with the design. I’ve scoured the games in my collection to bring you an overview of how different titles depicted Shaq with his Superman tattoo throughout the years. Let’s take a look back…way back… 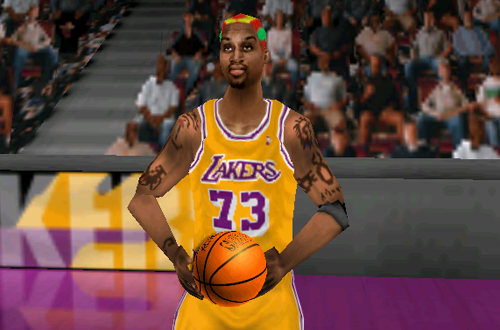 The graphics in basketball video games from twenty years ago naturally appear to be dated, and indeed primitive by 2022 standards. However, by the early 3D era, games already had player-specific limb textures, allowing the inclusion of tattoos and custom accessories. For example, look back at NBA Live 99, and you’ll see Dennis Rodman’s arms are covered in ink. However, not every player’s tattoos were accounted for, if indeed a game included tattoos in the first place. Rodman was one of the more heavily tattooed players in the NBA in the 90s, so depicting his ink was a higher priority. It’s the same reason he had multiple face textures to account for his changing hair colours.

No Superman Tattoo for Shaq…Yet 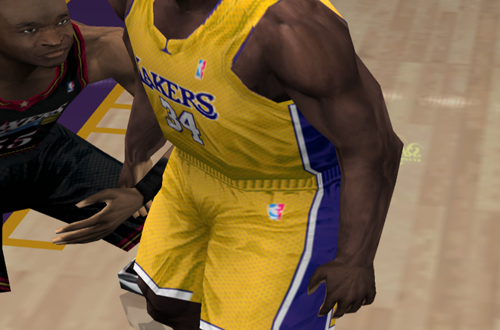 Although he had his Superman tattoo by 1995, Shaq was still depicted with bare arms in NBA Live games through to NBA Live 2001. Likewise, as of NBA 2K1, virtual Shaq was still without his ink in Visual Concepts’ series. Konami’s ESPN NBA 2Night 2002 didn’t feature tattoos, despite its player models otherwise being quite detailed. Even though Shaq’s Man of Steel ink isn’t a completely accurate depiction of the Superman logo, it’s possible that concerns over trademarks led to its exclusion. That isn’t uncommon in sports games. In older WWE titles, CM Punk notably had either bare skin, or a trademark-friendly parody in place of his Pepsi logo tattoo. 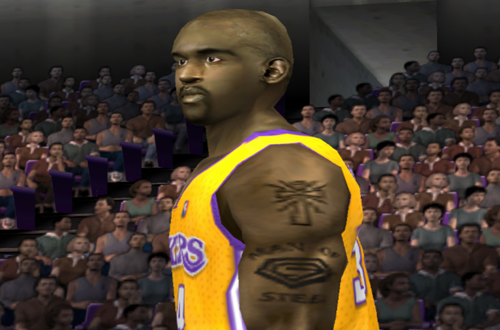 When EA Sports finally gave Shaq his Superman tattoo in NBA Live 2002, they were quite accurate in their depiction. Compare screenshots of the tattoo in-game to a photo of Shaq, and you’ll see how close they made it. The typeface of the “S” is different, and some of the detail is lacking, but at a glance – and even in a close-up in instant replay – it’s pretty on point. It’s probably as accurate as it can be without paying any licensing fees. Again, even though athletes’ likenesses may be licensed to appear in video games, there can be issues if they have a prominent tattoo from a trademarked brand. The subtle differences in virtual Shaq’s ink likely err on the side of caution. 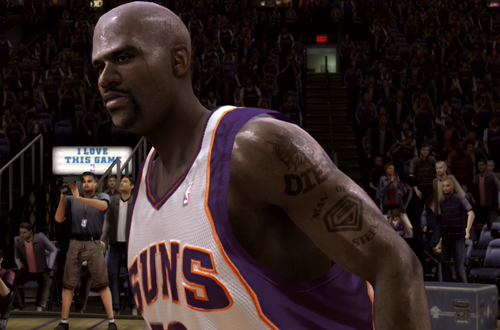 Indeed, this is basically confirmed with the depiction of Shaq’s Superman tattoo in later NBA Live games. One might be able to write off the differences in NBA Live 2002 as the result of lower-resolution textures, but as of NBA Live 10, the series was still using the same style for the tattoo. The “S” was closer to the actual typeface, but it still wasn’t a completely accurate representation. Interestingly, Shaq didn’t have his Superman tattoo at all when he appeared in NBA Live 18’s Ultimate Team, though his other tattoos were accounted for. Given that 2K was being sued for the inclusion of certain tattoos – a case they eventually won – EA was likely playing it safe once again. 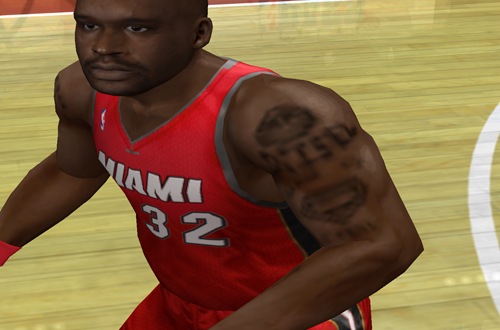 Speaking of tattoos and NBA 2K, Visual Concepts first featured Shaq’s Superman ink in NBA 2K2. Compared to NBA Live 2002 – and the level of detail on their player models in general – it wasn’t a particularly impressive representation. It was more of a pentagon than a shield, and it didn’t even feature an “S”. It was essentially just a black blob, and not even the “Man of Steel” text was legible. By ESPN NBA 2K5, it was a shield shape filled with alternating stripes, surrounded by slightly more legible “Man of Steel” text. Variations on this depiction of Shaq’s tattoo continued to be used through NBA 2K12. It looked fine at a distance, but was clearly inaccurate close-up. 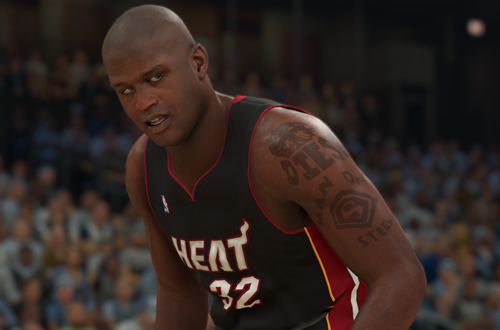 Beginning with NBA 2K13, Shaq’s Superman tattoo is quite similar to the rendition that earlier NBA Live games used. The “S” is stylised, though not quite the correct typeface. The shape of the shield is rather sloppily drawn, but “Man of Steel” is clearly inked around it. Even though 2K was ultimately victorious in the Solid Oak Sketches lawsuit, they may still be wary of depicting Shaq’s tattoo with too much accuracy. Just as CM Punk’s Pepsi tattoo was altered or removed in those old WWE games, the changes are likely sufficient to avoid being sued, or having to pay the licensing fees. Either way, it’s better than it used to be, but still not quite accurate. 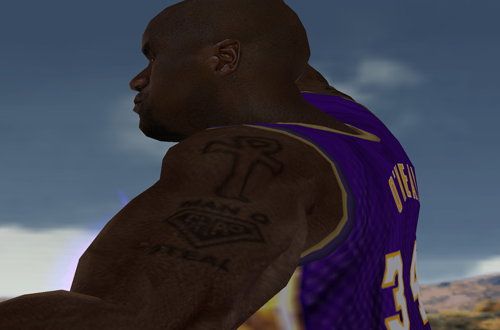 That brings us to NBA Ballers, Midway’s short-lived arcade streetball series. Midway clearly decided to have some fun with their efforts to avoid trademark infringement in the first game, released for PlayStation 2 and Xbox in 2004. Instead of an “S” in the familiar shield, the tattoo reads “SHAQ”. Not only that, but instead of “Man of Steel”, the surrounding text reads “Man O Steal“! NBA Ballers’ less serious atmosphere lent itself to a punny solution like this, rewarding eagle-eyed gamers – and anyone willing to take the time to zoom in on players in instant replay – with an amusing Easter egg. As far as avoiding trademark infringement, it’s easily the most creative approach!

It was this funny take on Shaq’s Superman tattoo that prompted RayRay_953 to suggest this topic for a Wayback Wednesday feature, and I’m glad that he did. I haven’t spent too much time with NBA Ballers since adding it to my collection, so I wasn’t aware of this Easter egg with Shaq’s ink. I love it though, because these are the little details that stick with us when we spend hours upon hours with a basketball video game. It’s also something that we’ve lost by not having multiple titles on the market. Instead of a number of games with different styles and solutions, everything is done 2K’s way, since the NBA 2K series is currently the only game in town.

With that being said, until I received the suggestion, I hadn’t paid too much attention to the accuracy of Shaq’s tattoos throughout the years. This may speak to my own ignorance and lack of focus on such details, though I’d also like to think that it shows how games can get away with inaccuracies unless you go looking for them. Faced with the prospect of expensive licensing fees or a possible lawsuit, basketball video games have improvised with approximations of Shaq’s Man of Steel ink that look fine during gameplay. It’s something that modders can fix on PC, but even in a vanilla game, these various replacement tattoos don’t ruin the experience in my opinion. 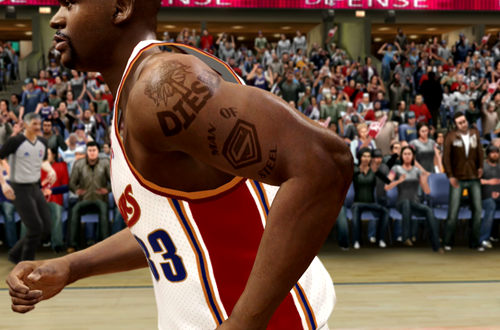 As far as the best fake Superman tattoo that a virtual Shaq has sported, my vote goes to the NBA Live series. During the seventh generation games, it was just about as accurate as possible without potentially stepping over the line. Putting aside the blob in NBA 2K2 – a product of lower-resolution textures – the worst one is probably the stripes in place of the “S”; though, as I noted, the shield is rather sloppily drawn in newer NBA 2K games. The “Man O Steal” tattoo is the least accurate, but easily the funniest. It would be wildly out of place in a sim game – or at least, the misspelling and dropping the “F” from “Of” would be – but it’s perfect for an arcade atmosphere!

Whenever someone sneers at the idea of dusting off old basketball games, these are the things I like to point to. Sure, many games still hold up, and are a blast to play. Others contain great ideas that could be brought back and repurposed for future releases. However, there are also these fun memories and discoveries when we look back: tattoo Easter eggs, familiar faces in strange and familiar places, retro team branding that we loved, some crazy ratings, or weird mistakes in the rosters that slipped through. If we can go back and discover interesting details, secrets, and glitches in other genres, then why not have fun with basketball video games, too?

It’s something that I’ll continue to do in Wayback Wednesday, especially when I get a great suggestion like this one from RayRay_953; once again, thank you for the idea! Having spent most of my time playing NBA Live and NBA Jam growing up and in my early adulthood, I’m sure there are other fun details like this that I’m not aware of. Now that I’ve built up a sizeable collection of basketball video games across multiple series and platforms, there are plenty of opportunities to make similar discoveries. If you can recall fun details like this, please let me know! I’ll always enjoy firing up the games, doing the research, and then spotlighting interesting virtual hardwood trivia.

I’d suggets to look at Damon Stoudemire grandmother tattoo in NBA Live 2003 (might be in 2004 too) and compare it to the real life one. It’s not even close and somehow hilarious looking. 🙂

Will definitely have to look into it now!