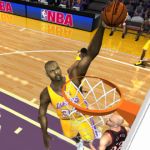 This is Wayback Wednesday, your midweek blast from the past! In this feature, we dig into the archives, look back at the history of basketball gaming, and indulge in some nostalgia. Check in every Wednesday for retrospectives and other features on older versions of NBA Live, NBA 2K, and old school basketball video games in general. You’ll also find old NLSC editorials re-published with added commentary, and other flashback content. This week, I’m taking a look back at the dominance of Shaquille O’Neal in NBA Live 2002.

If you grew up watching him play or you’re at least familiar with your NBA history, you’ll know that Shaquille O’Neal was one of the most dominant players in league history. Although he was a force to be reckoned with for over a decade, the most dominant stretch of his career came between 2000 and 2002, when he led the Los Angeles Lakers to three straight championships. Putting up huge numbers in the NBA Finals became a trend for Shaq, beginning on this day in 2000 when he scored 43 points in Game 1 against the Indiana Pacers, after scoring 46 points, 37 points, and 41 points in the opening games of the first three rounds.

As you might expect, Shaq was generally also a beast in NBA video games. He was particularly unstoppable in NBA Live 2002, especially in the hands of the unforgiving AI on higher difficulty levels. Let’s take a look back…way back…

NBA Live 2002 is a game that I’m oddly nostalgic for. As I discussed in my retrospective, it was a controversial release due to being the first console exclusive in the NBA Live series. Although it holds up a little better than I remembered and was a game that I had fun playing, it definitely had its issues. It’s the first NBA Live game to feature Michael Jordan as an active player though, and it was the new game that was coming out when I took over the NLSC back in August 2001, so it’s memorable to me for a couple of reasons. If there’s one thing that I always remember about NBA Live 2002 though, it’s how Shaquille O’Neal was an absolute nightmare to guard. Being in the prime of his career, Shaq naturally had superb ratings in NBA Live 2002. Given his dominance at the time, it was only appropriate that he was a beast in the game. However, his unstoppable nature was somewhat enhanced by the relative infancy of basketball gaming technology during that era. It’s easy to forget just how much basketball games have improved on the defensive side of the ball since the early days, especially as the tech for player collisions and physics has become more sophisticated and realistic. When NBA Live 2002 came out, it was still tough to play physical defense and stick to the player that you were guarding.

This meant that the defense was at a distinct disadvantage, especially when it came to protecting the paint. Since that’s where Shaq did most of his damage, his opponents really were at his mercy, even more so than in real life. Without the ability to play tough physical defense and deal out the hard hits that the real Shaquille O’Neal so often endured, there was no way to consistently slow him down and limit easy opportunities. Most players could get to the hoop with ease in NBA Live 2002, and hook shots were also kind of cheesy. With his size, strength, and scoring ratings, Shaq was able to exploit those issues much better than other players.

Even if you wanted to try fouling Shaq once he got the ball down low – NBA Live 2002 was the last game in the series with a handcheck button – it wasn’t a reliable strategy. There was no guarantee that the player you were controlling would actually make contact; even if they did, a lot of collisions on shot attempts in those older games would result in unaltered shot trajectories, and a few too many three-point play opportunities. Even if the shot didn’t fall, poor free throw shooters were often too reliable from the line in the hands of the CPU, which still happens today. Then again, as Shaq famously once said, he makes them when they count (or not).

If you were playing on twelve minute quarters, the end result would be some huge scoring nights for Shaquille O’Neal. In my original Sacramento Kings Franchise game, he once scored 73 points against me, a feat that he repeated when I re-created the experience last year. Holding Shaq below 50 points when playing on 12 minute quarters and one of the higher difficulty levels always felt like a huge achievement in NBA Live 2002, because once a dunk animation was triggered, chances were he was getting his points one way or another. I can’t recall too many full-length games in which an AI-controlled Shaq didn’t score at least 30 points on me. On the plus side, Shaq was just as beastly when you took control of him. One of the most frustrating experiences in basketball video games is the inability to do what the CPU can, using the exact same player and tactics. Thankfully, that wasn’t really the case with Shaq’s dominance in NBA Live 2002. Granted, the CPU had an easier time sticking with its man on defense – something else that is still somewhat of annoyance today – and tended to get a lot of easy strips on collisions, so it could defend Shaq a little better than the user could. However, if you wanted to keep feeding the Diesel and powering into the lane for dunk after dunk, you could put up huge numbers, too.

In some respects, NBA Live 2002 was the pinnacle of Shaquille O’Neal’s dominance in sim-oriented basketball games. Although he remained a tough player to guard in future games, improvements to defensive controls, offensive strategy, and player physics made him far less overpowered. In fact, a method of counteracting his dominance was added the very next year in NBA Live 2003, in the form of the Take Charge button. After being destroyed by Shaq so many times in NBA Live 2002, it was weird to hold him to just six points in a game of NBA Live 2003, all by getting him into foul trouble through taking charges as he tried to back down in the post.

Just as we recall the memorable performances we witness in the real NBA, we basketball gamers tend to recall the players who lit us up in various titles over the years. Ensuring realistic shot distribution and player statistics has been an ongoing challenge for EA Sports and Visual Concepts, and issues such as point guard domination have left me with memories of unusually high scoring games for Steve Nash in NBA Live 06, and more egregiously, Chris Duhon in NBA Live 10. Nothing has been quite like Shaquille O’Neal in NBA Live 2002, however. In all fairness, that’s probably because in many respects, it wasn’t all that far removed from reality.