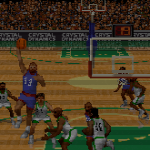 This is Wayback Wednesday, your midweek blast from the past! In this feature, we dig into the archives, look back at the history of basketball gaming, and indulge in some nostalgia. Check in every Wednesday for retrospectives and other features on older versions of NBA Live, NBA 2K, and old school basketball video games in general. You’ll also find old NLSC editorials re-published with added commentary, and other flashback content. This week, I’m taking a look back at the PC version of Slam ‘N Jam.

Back in the 90s, there were quite a few basketball video games that only licensed the name and likeness of a lone NBA star. Games like Michael Jordan in Flight, Barkley Shut Up & Jam, and David Robinson’s Supreme Court, all featured their namesake player alongside fictional teammates and opponents. In 1995, Crystal Dynamics (the developer responsible for Gex and Tomb Raider) and Left Field Productions (makers of Kobe Bryant in NBA Courtside) released a couple of games with the name Slam ‘N Jam. The first game, Slam ‘N Jam ’95, featured only fictional players. It was followed by a sequel in 1996, titled Slam ‘N’ Jam ’96 Featuring Magic & Kareem.

As the title would imply, the sequel licensed the names and likenesses of both Magic Johnson and Kareem Abdul-Jabbar. While the original game had been exclusive to the 3DO, the sequel was released for the original PlayStation and SEGA Saturn. It was also ported to the PC, simply under the title of Slam ‘N Jam. That’s the version I’m focusing on today, so let’s take a look back…way back…

Slam ‘N Jam could best be described as a hybrid between a simulation and an arcade style basketball game. It features five-on-five gameplay, variable quarter lengths up to the regulation twelve minutes, fatigue, timeouts and substitutions, and standard rules including foul calls. At the same time, it’s very fast-paced and action-packed, with players leaping far and high into the air to throw down huge dunks. They’re not as crazy as the slams in NBA Jam, but they’re certainly exaggerated. There aren’t any power-ups or mechanics such as being On Fire, making it more of a casual approach to an otherwise relatively realistic depiction of basketball. It’s actually very similar to Run and Gun by Konami, and its NBA licensed home port, NBA Give ‘N Go. The art style and animations are very much alike, even down to the dunks and the way the backboard sags and springs back up when players hang around on the rim. Both games also utilise a baseline camera angle during gameplay that is similar to the 2K Cam, though the camera in Slam ‘N Jam doesn’t rotate. Interestingly, even when the teams swap ends at halftime, the angle doesn’t change. This means that in one half, the camera will be following your players, while in the other they’ll be coming towards you. It’s a bit different, and can be disorienting.

Although fairly light on strategy – you generally want to finish inside with a dunk as often as possible – Slam ‘N Jam does feature some more advanced controls. On top of the standard shooting, passing, stealing, blocking, rebounding, switching, and turbo controls, you can also call for a pick or isolation. That’s about the extent of playcalling however, and by default, the PC version’s “simple controls” setting automates steals and turbo usage. It’s a little strange that standard full controls aren’t the normal setting, but it does underscore the more casual approach that the game is aiming for. If you do want full control, make sure that you select the “complex controls” option.

Although Magic Johnson and Kareem Abdul-Jabbar are the only real players in the game, its teams are clearly based on the NBA. There are 29 teams from the same cities and states as all of the NBA teams of the era, sorted into the same Atlantic, Central, Midwest, and Pacific Divisions within the East and West Conferences. The only differences are that Magic & Kareem’s All-Stars replace one of the Los Angeles teams (a second Magic Johnson also appears on the team named Los Angeles), and the Golden State Warriors are simply named Oakland. None of the fictional players parallel any real life counterparts though, and jersey colours have also been changed.

Interestingly, the East and West All-Stars have been replaced by the Left Field Lefties and the Monsters. The Lefties appear to be members of the Left Field development team, while the Monsters are an assortment of wacky characters including a gorilla, a mummy, and a mascot-type character. There’s even a “Purple Guy”, predating the infamous character from the Five Nights at Freddy’s series. With this sillier approach to the All-Star teams, and two versions of Magic Johnson in the roster, it’s clear that that the game wasn’t taking itself too seriously. Despite the sim elements, it was definitely taking some cues from arcade titles such as NBA Jam. The game’s Season and Playoffs mode are also clearly modelled after the NBA, with the season being 82 games in length, and the Playoffs utilising the same East and West brackets with the old 5-7-7-7 format. A Best of 3 and single game knockout settings are also available, and the regular season can also be shortened to 13/14 games (only the teams in the West/East), 28 games (each team once), or 56 games (each team twice). The simulated statistics are a sight to behold, though. Not only do the starters play the full game, but they put up ridiculous numbers. In a 324-181 simulated victory, Magic Johnson put up 87 points and 32 assists!

You can only play one Season game at a time, similar to Left Field’s approach with NBA Courtside. When the regular season has concluded, a message instructs you to select the Playoffs option from the main menu, and choose the “Last Season” setting to use your season results for the seeding. At any time, you can start a new Season or Playoffs, wiping the results and overwriting your previous game. Standings are shown in between Season games, but otherwise you can’t view them, or any statistics, until the season is over. Although you’re able to use the left and right arrow keys to scroll through stats screens, you can’t go back and forth; only advance through them.

Aspects like that are definitely clunky, which affects the depth and replay value of Slam ‘N Jam, at least in terms of being a single player game. If you’re not too worried about realistic stats or having multiple season saves, then it needn’t be a problem. It’s not as though the game features authentic teams or real players outside of Magic and Kareem, though that in itself is a potential drawback as well. I’ve found the concept of basketball video games with fictional players intriguing, ever since I played World League Basketball (with which Slam ‘N Jam shares a passing target mechanic), but needless to say, they obviously don’t have the same widespread appeal.

There is merit to the game’s approach to the on-court action however, as it can be a lot of fun. The gameplay experience can also be changed up by toggling the foul settings between lenient, strict, and turned off completely, enabling and disabling fatigue and out of bounds calls, adjusting the difficulty, and even whether the teams change ends at the half. A few lines of commentary and an appealing visual style with detailed players and environments also make Slam ‘N Jam’s presentation quite impressive for the era. The PC version does have a filter similar to TV scan lines though, making it look a bit dull compared to the crisper graphics of the console releases. Since we’re looking at the PC version, it’s worth bringing up the subject of modding. Taking a look at the game’s files with a hex editor, it seems like there is potential to mod it. There’s a roster file that contains all of the player data, including their names, jersey numbers, ratings, and even skin colour (though not the faces, it seems). With a bit of work and patience, one might be able to figure everything out as far as editing and replacing players. As far as I can tell though, no modding community ever sprang up around the game, which isn’t surprising given its lack of popularity compared to fully licensed titles such as NBA Live.

All in all, Slam ‘N Jam is reasonably solid when it comes to how it plays on the virtual hardwood. It’s a fun blend of sim and arcade elements that doesn’t take itself all that seriously, providing an enjoyable casual experience in the process. The lack of real players is a drawback, the Season mode is awkward with a flawed sim engine, and it’s somewhat derivative of Konami’s games from the same era, so it’s not particularly deep or original. It’s a good take on the approach though, with fine graphics and fun gameplay, not to mention the benefit of a PC release. It’s not an all-time classic, but Slam ‘N Jam is another mid 90s release that’s noteworthy in its own right.