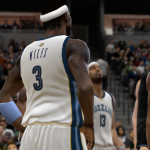 This is Wayback Wednesday, your midweek blast from the past! In this feature, we dig into the archives, look back at the history of basketball gaming, and indulge in some nostalgia. Check in every Wednesday for retrospectives and other features on older versions of NBA Live, NBA 2K, and old school basketball video games in general. You’ll also find old NLSC editorials re-published with added commentary, and other flashback content. This week, I’m taking a look back at some stints that lasted longer than I remembered, and the games that corrected me.

I’ll never claim to be an infallible source of knowledge, whether I’m talking about real basketball or basketball video games. There’s a lot of stuff I remember off the top of my head, but I’ve certainly found that it pays to double-check and look things up. When it comes to the players I grew up watching, I tend to have a good memory as far as who they played for, how long they played for them, and when they moved on to a new team. However, my recall definitely isn’t perfect. As such, when I revisit an old game, I’m sometimes surprised to see a player still on a particular team’s roster.

Yes, this is another example of basketball video games being interactive almanacs. As I’ve said, it’s one of the most appealing parts of dusting off old video games: seeing that snapshot of the NBA at the time they were developed. Just as there’s something really fun about seeing familiar faces in strange places, or back in familiar places for that matter, it’s interesting to be reminded of stints that lasted longer than I recalled. As usual, I’m looking at these examples through the lens of the games that reminded me of these tenures. With that being said, let’s take a look back…way back… 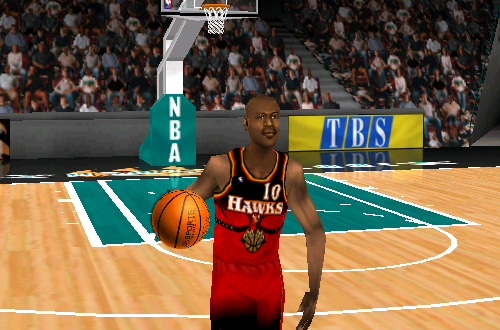 While he began his career with the New Jersey Nets, Mookie Blaylock ended up spending seven seasons with the Atlanta Hawks. That’s whom he played for when I really got into basketball, so naturally it’s the team I associate him with. However, Mookie finished his career with the Golden State Warriors, coming off the bench in 35 games in his final campaign in 2002. The funny thing is that I had a false memory of him being traded to the Warriors after the 1998 season, but in fact he didn’t head to Golden State until June of 1999. No doubt I mixed that up with a flurry of other post-lockout moves, but you can see him still there on the Hawks’ roster in NBA Live 99. 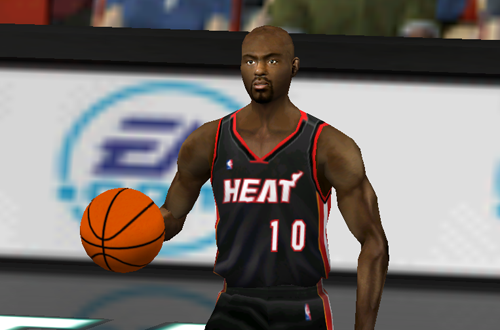 Another star point guard from the 90s that stuck with a team longer than I recalled is the master of the UTEP Two-Step, Tim Hardaway. While Tim Bug is often associated with the Warriors, being a member of the short-lived Run-TMC trio with Chris Mullin and Mitch Richmond, I usually think of his time playing alongside Alonzo Mourning with the Miami Heat. For some reason, I think of their last hurrah being in 1999 or 2000, but as seen in NBA Live 2001, they were still in Miami after that. Of course, Mourning only played 13 games in 2001 due to his kidney problems, which is likely why I sometimes think they were a duo for only three or four years, rather than six. 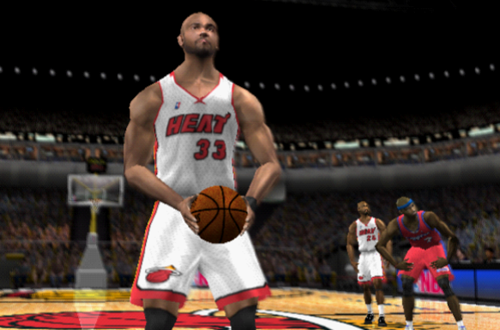 On the subject of Alonzo Mourning, I tend to forget that his first of two stints with the Miami Heat technically ran through 2003. It’s likely due to his aforementioned illness, which also saw him sit out the entire 2003 season, but over the years, I’ve erroneously recalled him leaving the Heat earlier than that. Following a brief stint with the Nets that included a retirement not long after signing with them, and then a comeback in 2004, he was back in Miami by 2005. He also had quite a productive season playing 75 games in 2002. Mourning was a free agent in NBA Live 2003’s default roster, so it’s usually NBA Live 2002 which reminds me that his first Miami tenure was longer. 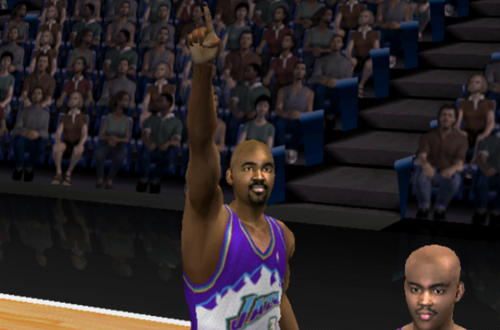 Truth be told, Bryon Russell’s entire career lasted longer than I remembered. I had a vague, incorrect memory of him hanging it up after spending the 2004 season with the Los Angeles Lakers. In fact, he was still active as of the 2006 season, though he only played a single game for the Denver Nuggets. After facing him twice in the NBA Finals, he also became a teammate of Michael Jordan in MJ’s final season with the Wizards. When Russell went to Washington in 2002, it ended his long stint with the Utah Jazz. For whatever reason, I’ve had recollections of him leaving sooner, but whenever I play NBA Live 2002, I’m reminded that he was still there, and a starter. 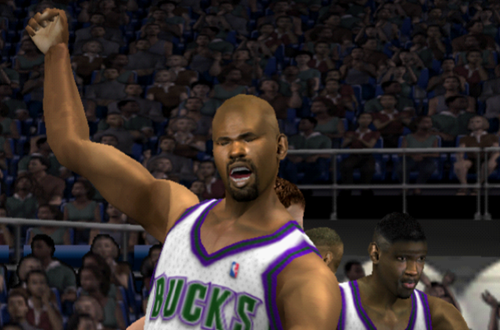 The top pick in the 1994 Draft, Glenn Robinson’s career was rather brief in general, lasting just eleven years and seeing him retire at age 32. He spent most of those seasons with the Milwaukee Bucks, before having stints with the Atlanta Hawks, Philadelphia 76ers, and San Antonio Spurs, where he won a championship in his final campaign. I always forget that the Big Dog had one year stints with the latter three teams however, and again, it’s NBA Live 2002 that provides a reminder that he was still with the Bucks as of the 2002 season. I’ve definitely had false memories of him being another rising star from the mid 90s who was traded around 1999-2000. 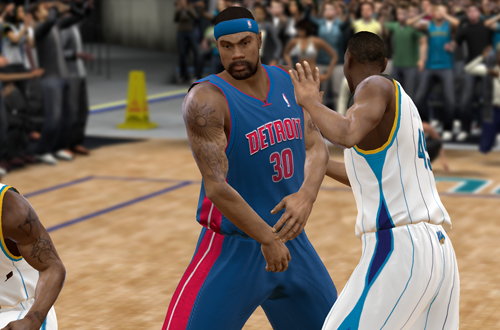 Although the Detroit Pistons had a fantastic run through the 2000s with six straight Eastern Conference Finals appearances, two NBA Finals appearances, and a title in 2004, I’ll admit to it being easy to lose track of when their core changed and broke up. I remember that Ben Wallace went to the Bulls in 2006 – especially because it’s a move I hated – and that Chauncey Billups was traded for Allen Iverson in 2008. However, I forget that Rasheed Wallace was on the team for all six of those years, plus one more in 2009. Seeing him on the Pistons in NBA Live 09 or NBA 2K9 reminds me that he didn’t leave to play for the rival Celtics until the 2010 season. 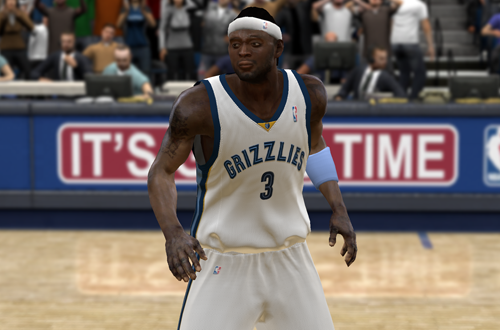 This differs from the other stints on this list, being much shorter. Nevertheless, I do have a false (or maybe faulty) memory when it comes to Darius Miles playing for the Memphis Grizzlies. Miles played 34 games for Memphis after missing the previous two seasons with knee injuries. His comeback with the Grizzlies made waves because of the financial impact it had on the Portland Trail Blazers, who had been granted an injury exception when it appeared he wouldn’t ever play again. I remember Miles playing in enough games to cost the Blazers their exception, but NBA Live 09 and NBA 2K9’s roster updates remind me that he also stuck around for the rest of the year. 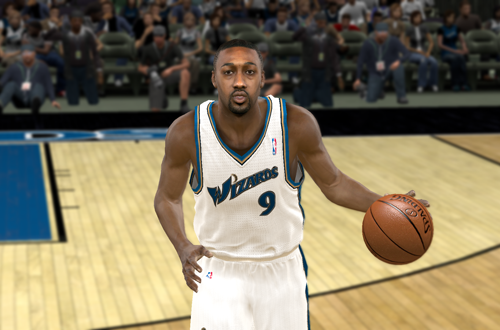 I can chalk this one up to a timeline that was blurred by injuries and a suspension, as well as my copy of NBA 2K11 PC featuring default rosters that are updated as of the end of the 2011 season. Basically, I’ve remembered Arenas’ stint with the Wizards ending about a year earlier than it did, around the time of the incident involving guns, NBA policy, and D.C. law. It’s not until I look it up (or go back to the original rosters in NBA 2K11) that I remember he remained a Wizard until December 2010, changing his jersey number from 0 to 9 along the way. It’s a shame that his NBA career fizzled out the way it did, as he was one of the most exciting scorers to watch in the 2000s. 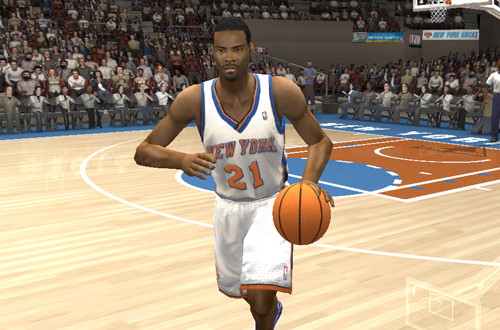 If you asked me when Charlie Ward’s tenure with the Knicks ended, my guess would have been around 2002. I remember that he spent most of his career in New York, but finished his career with the Rockets. That final year in Houston was in fact in 2005, and that was after being traded from the Knicks to the San Antonio Spurs halfway through the 2004 campaign. In an era where superstars are unlikely to have stints with one team that last a decade, a role player spending nine and a half seasons with the franchise that drafted them seems almost unbelievable. Perhaps that’s why I thought Ward was traded earlier than he was. NBA Live 2004 proves that he wasn’t. 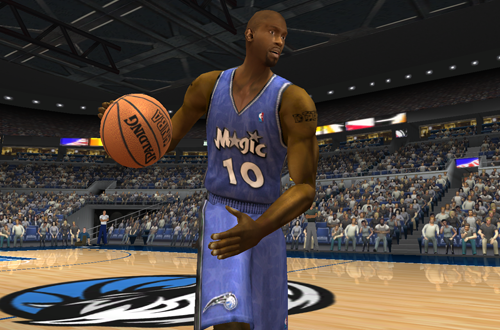 My nostalgia for the 90s means that I always associate Darrell Armstrong with the Orlando Magic. In fact, I’ve forgotten a couple of his later stints, such as his seasons with the Pacers and Nets in the final two years of his career. Thanks to spending a lot of time with NBA Live 2004, where Armstrong can be found on the Hornets’ roster, I do remember that he didn’t spend his entire career with the Magic. As NBA Live 2003 demonstrates, he was still in Orlando in 2003, which is later than I remembered off the top of my head. As an aside, it was cool to see him go from benchwarmer and embarrassing dunk contest participant to Sixth Man of the Year, and later a starter.

No doubt this will become another multi-part series as I continue to dust off older games, and be reminded of stints that lasted longer than I usually recall. Hopefully I’m not the only one who has developed such gaps in their memory, and enjoys seeing these reminders when revisiting old favourites. Once again, basketball video games have proven to be a useful resource in teaching fans about the NBA and its history, and older titles – give or take a few inaccuracies and odd situations – now stand as interactive almanacs. NBA 2K’s retro teams are a history lesson in their own right, but there’s nothing quite like playing an old game, and interacting with yesterday’s NBA.