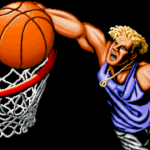 This is Wayback Wednesday, your midweek blast from the past! In this feature, we dig into the archives, look back at the history of basketball gaming, and indulge in some nostalgia. Check in every Wednesday for retrospectives and other features on older versions of NBA Live, NBA 2K, and old school basketball video games in general. You’ll also find old NLSC editorials re-published with added commentary, and other flashback content. This week, I’m taking a look back at Street Hoop for the Neo Geo, recently re-released on PlayStation 4, Xbox One, and Nintendo Switch.

Growing up in Australia in the 90s, I have to admit that I was completely ignorant of the Neo Geo. The Super Nintendo and SEGA Mega Drive (known as the Genesis in NTSC regions) were the popular consoles, and as it stood, I was a Nintendo fanboy. As such, it wasn’t until years later than I learned about some of the other consoles that were also vying for a share of the market back then, or the library of games that were exclusive to those platforms. Those games included several basketball titles, such as the one we’re looking at today: Street Hoop.

In the wake of NBA Jam’s success, several developers tried to emulate its style with their own arcade basketball games. In 1994, Data East threw their hat into the ring with Street Hoop, released exclusively for the Neo Geo. How does it stand up against NBA Jam and other arcade hoops games? Thanks to the recent re-release on PS4, X1, and Switch, we can take a look back…way back…

Titled Street Slam in the US and Dunk Dream in Japan, Street Hoop features three-on-three gameplay taking place on a variety of street courts. Like NBA Jam, it has exaggerated high flying dunks and minimal rules, for a casual experience that doesn’t take itself too seriously. Players can knock each other down to perform steals, and notably, there is no goaltending rule in effect. The game’s power-up mechanic is the Super Shot meter, which allows users to perform a spectacular play accompanied by cartoonish effects, such as flying even higher for a somersault dunk, or the basketball either catching fire or sticking to the backboard before dropping in on a three. Gamers can choose one of ten teams to play with. In the European and Japanese versions, the teams are from ten different countries, while the US version features American cities. There are no individual player ratings, but each team has their own overall strengths and weaknesses, dividing 18 ratings points between the categories of dunking, three-pointers, speed, and defense, with a maximum rating of eight. Games are divided into two halves of two minutes in length, with the object being to defeat every other team and earn a place on the high scores. A Continue must be used if you trail at halftime, and the team that wins the tip starts the second half with the ball.

One of the first things you’ll notice about Street Hoop is the quality of its graphics. Thanks to the power of the Neo Geo’s hardware, the graphics are outstanding for the time, with vibrant colours, detailed players and environments, and fluid animation. The big dunks that drag the backboard down towards the blacktop and the cartoony effects on the Super Shot moves do get you pumped up. Music and commentary is a bit repetitive, and the announcer is no Tim Kitzrow, but the game’s audio still plays a role in establishing a fun atmosphere. Even today, there’s something appealing about the overall aesthetic in Street Hoop.

Unfortunately, I would have to say that Street Hoop’s gameplay doesn’t hold up quite as well as NBA Jam or NBA Jam Tournament Edition. It’s still very playable and reasonably enjoyable, but I also find it to be a little frustrating. The lack of a sprint control has caused a lot of older sports games to age badly, and it’s a problem in Street Hoop. Despite the differences in ratings, teams seem to play the same. The US squad is the worst three-point shooting team in the game, yet it’s still quite easy to knock down threes with them, even from the backcourt. Everyone basically runs at the same speed, and control switches automatically on defense, which isn’t always convenient.

I have mixed feelings about the lack of goaltending. It feels quite cheap when your three-pointer is denied at the last second, but on the other hand, you can do the same thing to your opponent. In fact, the game is quite forgiving on the timing for blocks and rebounds. Street Hoop also features the ability to switch a dunk attempt into a layup, call for an alley-oop, and perform putback dunks; gameplay elements that Midway didn’t implement until NBA Hangtime. Teammate AI does something to be desired though, as they’re a little lazy when it comes to crashing the boards or playing defense. Your opponents, on the other hand, don’t suffer as much from AI issues. Since I’m playing Hamster’s re-release on PlayStation 4, I should mention some of the extra features they added. It includes both the English and Japanese versions of the game, access to a few gameplay options, and a couple of challenge modes: Hi Score, and Caravan. In Hi Score mode, the object is to amass the highest cumulative score, while playing continuously until you reach a Game Over. Caravan mode is similar, only there’s a five minute time limit. These features can change up the experience, though the gameplay still gets repetitive after a while. That’s not uncommon with older arcade basketball games, but Street Hoop does feel particularly shallow.

Perhaps the biggest problem is that Street Hoop is designed as a literal arcade game; that is to say, one you’re meant to keep putting money into. As I mentioned before, if you trail at the end of the first half, you’ll need to use a Continue to…well, continue. Obviously, the same applies if you lose a game, and wish to keep playing through the tournament. This approach is a real annoyance in a home port, and something the console versions of NBA Jam avoided by doing away with the Credits and Continues system. Hamster’s re-release does allow you to keep adding as many Credits as you like with the press of a button, but it’s still a hindrance.

Despite my gripes, and overall preference for the original NBA Jam games instead, I did have fun messing around with Street Hoop. Once you get a feel for the controls, it’s very satisfying to knock an opponent out of the air on a dunk attempt, or throw down a big jam of your own. The relative ease of making threes from the backcourt is rather entertaining, and I imagine it would be a great source of amusement when playing multiplayer. I liked discovering all the different types of dunks and Super Shots, and the game held my attention as an old favourite might. When I found myself trailing, I felt invested in playing hard and trying to complete the comeback.

I’d compare Street Hoop to Barkley Shut Up and Jam, another arcade basketball game that followed in the footsteps of NBA Jam; decent in its own right, but inferior to the game that defined the genre. The lack of real players in Street Hoop limits the appeal, as it did with Barkley’s fictional peers in Shut Up and Jam. You can only play with generic players for so long before it gets a little boring, especially when there’s minimal skill differentiation. The gameplay is solid and it has its own style which I can certainly appreciate, but in terms of the concept and overall experience, it’s definitely not on par with NBA Jam, and it does show its age a little more today. At the end of the day, I’m glad that I was able to finally check out Street Hoop all these years later, and that basketball gamers have the opportunity to easily pick it up via a digital re-release. I’m all for preserving video games, and it’s great to have another old school hoops title available. For some loose change, it’s fun to step back into the past for a change of pace. I can see how gamers who did play it back in the day would have enjoyed it, and maybe even consider it a classic. It’s not my favourite take on the arcade basketball experience, and it doesn’t quite measure up to NBA Jam in my book, but it’s a solid game that if nothing else, is worthy of another look.

Thank you for a big retrospective article! The subject’s background info was well prepared. 🙂

Glad you enjoyed it. Thanks for the suggestion!