Wayback Wednesday: The Life in NBA 08 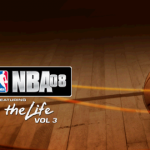 This is Wayback Wednesday, your midweek blast from the past! In this feature, we dig into the archives, look back at the history of basketball gaming, and indulge in some nostalgia. Check in every Wednesday for retrospectives and other features on older versions of NBA Live, NBA 2K, and old school basketball video games in general. You’ll also find old NLSC editorials re-published with added commentary, and other flashback content. This week, I’m taking a look back at The Life in NBA 08.

Sony’s NBA series was one of the last major competitors to the two big brands in sim-oriented basketball games, NBA Live and NBA 2K. The games are part of a lineage that includes the NBA ShootOut series, known as Total NBA in PAL regions. Being developed by divisions of Sony Computer Entertainment, the games were naturally exclusive to the PlayStation consoles, with the exception of NBA ShootOut 2000 which saw the series’ lone PC release. Generally speaking, the games did receive some positive reviews, but over the years they were unable to best NBA Live or NBA 2K in terms of sales or overall quality.

Nevertheless, the NBA series did boast some innovative features, some of which have since been adopted by NBA Live and NBA 2K in some form. A prime example is the mode known as The Life, a narrative-driven experience that predates the use of stories in MyCAREER by several years. The mode and the story changed from year to year, but in this article I’m primarily focusing on the PlayStation 2 version of NBA 08, as it’s the game I have in my collection. Let’s take a look back…way back…

Although The Life can be considered a forerunner to the story-driven approach in MyCAREER, the mode itself was quite different. There are similarities to today’s career modes, such as creating a player whose basic back story is that they’re a promising prospect looking to make it big in the NBA, but The Life took a very different approach to its gameplay experience. The mode consists of a series of scenarios with mandatory objectives that must be completed in order to advance the story, and optional “Showtime” goals that earn unlockable rewards. In that regard, it was similar to the story modes in wrestling games, albeit without the full matches. In NBA 08, the plot is that the renowned coach of the defending champions (always the team you choose) has announced his retirement at the end of the upcoming season. As such, the tale is about you and your teammates helping him to win one last title, so that he can go out on top. Your player’s back story, meanwhile, is that he’s finally making his pro debut after a serious knee injury. Speaking of your player, he’s always a 6’4″ point guard, and there aren’t many hairstyles or other customisation options to choose from. The player creation screen is rather cumbersome, which unfortunately sets the tone for The Life in general. There isn’t a lot of freedom, or choice.

The story begins with a series of cutscenes introducing the key plot points, and ending with a scene during training camp. It’s at this point that you’ll discover that all of the real players on your chosen team have been replaced by fictional characters, in order to facilitate the story. When you finally take control of the action, you’ll find yourself playing through the first of many drills. In some respects, this early part of the story serves as a forced tutorial, walking the user through the game’s basic controls and mechanics, as well as the scenario approach. In between the drills, you’ll watch occasional cutscenes that further the story. Suffice to say, they haven’t aged well.

You’ll quickly notice that the drills don’t always involve controlling your created player. This is because unlike MyCAREER, you’ll actually be controlling the entire team, not just your personalised rookie. Your first taste of this comes during a team scrimmage scenario, which is focused on scoring with a designated player and assisting him on at least two baskets. You only have a minute and thirty-five seconds to accomplish this, which doesn’t leave a big margin for error. It’s at this point you’ll start to realise just how tedious the scenarios can be, especially when some of the drills start repeating. It’s a real barrier to wanting to persevere with the story.

Even if you don’t get stuck completing any drills, it takes a very long time to get to the NBA season. The amount of time the story spends in training camp makes it badly paced. It’s also very frustrating to fail a scenario that has multiple objectives, and have to start all over again. Personally, I got stuck on a drill based on the Skills Challenge, and eventually just gave up. If you do make it through to the NBA season, however, it’s more of the same: complete set objectives to pass all of the scenarios, and in turn, make your way through a linear story with more bland cutscenes. The loading times of the PlayStation 2 version also make the mode drag even more. Honestly, playing The Life makes me appreciate the story-driven MyCAREER modes a whole lot more. For all my gripes – long and unskippable cutscenes, cheesy stories, a general lack of story branching, and of course, the need to grind – it’s still a far more satisfying experience than The Life. Even “Livin’ Da Dream”, with its undesirable cutscene-to-gameplay ratio, offers more enjoyment in its tough slog of a first season. In all fairness, and putting aside the fact that the NBA 2K games are superior in every way, The Life is a story mode, not a career mode. As I said, it’s more like the story modes in WWE games, though lacking full gameplay and story branching decisions.

Furthermore, while the execution definitely could’ve been better, and I don’t think the overall concept is right for a basketball game, it still has some merit. If nothing else, it was creative, and something different to what NBA Live and NBA 2K were doing at the time. Of course, different doesn’t necessarily mean good, especially when the concept isn’t done particularly well, but it’s an intriguing idea. It demonstrated that a narrative could be woven into an NBA game to create a new kind of experience, and Visual Concepts has obviously taken that concept and run with it in MyCAREER. In that regard, it may not have been a great influence, but you can appreciate the effort.

Outside of earning all the unlockables, there isn’t any replay value to The Life in NBA 08, if indeed you can make it through the mode in the first place. Had there been a few different paths you could take based on the outcomes of all the scenarios, it would (quite literally) be a different story. If the story could progress based on whether or not you completed some or all of the objectives in a scenario, it might have reduced the tedium. Likewise, the story would have been more palatable if it reached the NBA season sooner. Had the cutscenes also been more meaningful, they too would have felt far less repetitive and generic, much like the scenarios they preceded.

With all that being said, it’s arguably NBA 08’s subpar gameplay that’s the biggest problem. It’s nowhere near as good as NBA Live 08 or NBA 2K8, and its flaws tend to be the reason you end up failing scenarios. Had the experience on the sticks been more enjoyable, the mode might have at least been somewhat fun to play for a change of pace. It stands as a bold attempt at being innovative, but that alone doesn’t make it appealing. Of course, aspects of The Life have been recycled and put to better use in other games. In addition to NBA 2K’s MyCAREER stories, the BIG Moments in NBA Live utilised a similar concept of playing scenarios and completing objectives. There’s a reason that Sony’s NBA series and other NBA licensed games faltered, and it’s that they simply weren’t as good as NBA Live or NBA 2K, even with NBA Live falling on hard times. Those defunct series tended to have their strong points though, and innovative ideas that were admirable, even if they ultimately didn’t pan out. I’d say that aptly describes the various iterations of The Life. They don’t hold up as well as other modes in basketball games, or the story modes in wrestling games for that matter, but they’re interesting experiments. All the same, more recent games have found much better ways to let gamers live the virtual life of an NBA player.