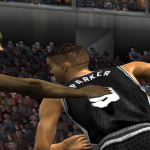 This is Wayback Wednesday, your midweek blast from the past! From retrospectives of basketball games and their interesting features, to republished articles and looking at NBA history through the lens of the virtual hardwood, Wednesdays at the NLSC are for going back in time. This week, I’m taking a look back at the rookies that were missing in NBA Live 2002.

Official roster updates are something that we take for granted these days, especially on console. As long as we’ve had modding tools on PC, adding missing rookies and other players – eventually complete with their proper faces – has usually been a fairly straightforward task. Of course, there’s always been value in players being added through official updates. It allows them to appear in the default rosters, and in some cases utilise correct audio. They also don’t stand out from original players, as was the case in older games with more primitive Create-a-Player functionality.

Since playing with the new rookie class is an appealing prospect every year, it’s disappointing when a noteworthy draftee is absent. In older titles, that could arguably be more frustrating than the absence of holdouts such as Michael Jordan and Charles Barkley. At least in their case, developers were unable to license them. With missing rookies, their absence came down to simply not being signed to an NBA contract in time. Funnily enough, NBA Live 2002 did include MJ as an active player due to his comeback with the Washington Wizards, while a handful of prominent rookies were missing instead. Let’s take a look back…way back…

The roster cut-off date that’s displayed during the boot screens in basketball video games explains why certain players are missing, be they rookies or other players that were unsigned when the rosters were finalised. Official roster updates render it moot in modern titles, but before they were commonplace, that date indicated where to begin as far as adding players and making further transactions to bring a game up to date. NBA Live 2002’s roster cut-off date was September 10th. Michael Jordan’s comeback officially occurred after that, but as he was already included as a Legend, there was some wiggle room. That wasn’t the case with these five missing rookies. 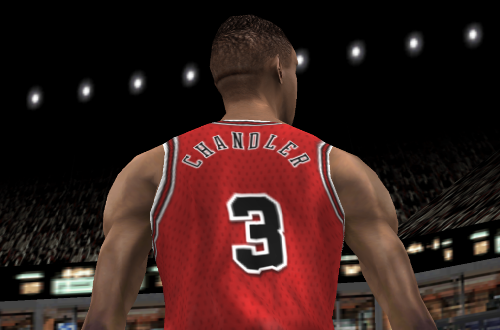 Ideally, the second pick in the Draft will be available in the forthcoming sim titles. Unfortunately, after trading away rising star Elton Brand for high school prospect Tyson Chandler, the Chicago Bulls dragged their feet on signing him. Chandler didn’t ink his rookie contract with the Bulls until October 1st, almost three weeks after the roster cut-off date for NBA Live 2002. It was a bizarre delay considering how willing they were to trade a more proven player for a raw rookie with potential. That wasn’t an uncommon move at the time, but you’d think that the team would be eager to sign Tyson Chandler as soon as possible, given that they were pinning their hopes on him.

As a diehard Bulls fan still coming to terms with following a rebuilding team after the glory days of the 90s, the loss of their best established player didn’t make them a more appealing option to play with; especially in Franchise mode. It wouldn’t have stung so much if the virtual Bulls at least had the intriguing high school prospect that they’d traded Elton Brand for, but I couldn’t even try to enjoy a rebuilding effort with the official rosters! I don’t remember the reasons for the delay in signing Chandler to his rookie contract, and I can’t seem to find any stories that discuss it. It’s one of those things that we can chalk up to Jerry Krause’s lack of brilliance later on in his career. 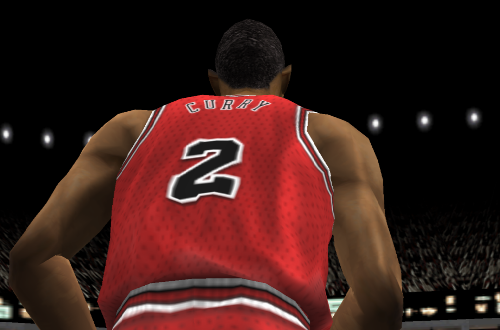 Not only did the Bulls drag their feet on signing Tyson Chandler to his rookie contract after trading away Elton Brand to get him, but they also delayed signing the player they selected with their own pick: Eddy Curry. Krause’s plan to build around a twin tower duo out of high school was questionable at the time and doesn’t look any better in hindsight, but it might’ve at least been fun to explore the possibility on the virtual hardwood via Franchise mode. I couldn’t do that though, as the late signing meant that the Bulls were missing both of their Class of 2001 rookies in NBA Live 2002. Sure, I could’ve added them via Create-a-Player, but it just wouldn’t have been the same.

While they weren’t the only prominent rookies to be missing in NBA Live 2002, they stood out as they were both top five picks, and played for the same team to boot. The other three noteworthy missing rookies in NBA Live 2002 are spread out across three different teams, all of whom had players that softened the blow of those absences. The Baby Bulls of the early 2000s were rough to play with at the best of times, and the main draw of using them in NBA Live 2002 would’ve been developing their teenage draftees into superstars. Although it wasn’t the only reason I opted to use the Kings in NBA Live 2002, the Bulls missing rookies Curry and Chandler was a major factor. 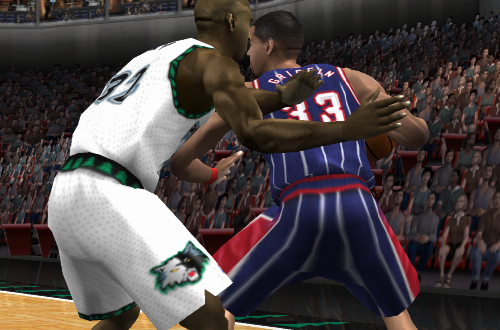 In the Bulls’ defense – sort of – they weren’t the only team that took their time signing a Class of 2001 rookie, leading to a top ten pick being absent from NBA Live 2002. Eddie Griffin was originally selected by the New Jersey Nets with the seventh overall pick in the 2001 Draft, but was traded to the Houston Rockets along with Brandon Armstrong in exchange for the rights to Jason Collins and Richard Jefferson. Griffin was also a teenage prospect, having left Seton Hall after his freshman year following an altercation with a teammate. It undoubtedly affected his Draft stock, and likely contributed to the Rockets holding off on signing him despite his talent and potential.

There was a time when Eddie Griffin was considered a possible top pick in 2001. In later games, he was often a favourite of Franchise devotees owing to his untapped potential. Because he was signed to his rookie contract on September 19th however, that couldn’t happen in NBA Live 2002 unless he was created. Of course, any virtual hardwood disappointment pales in comparison to the sad tale of the real Eddie Griffin. Outside of occasional flashes of brilliance, he never quite found his footing in the NBA, and struggled with alcohol abuse. Griffin was only 25 when he died in 2007, crashing into a moving train after ignoring a warning signal while driving intoxicated. 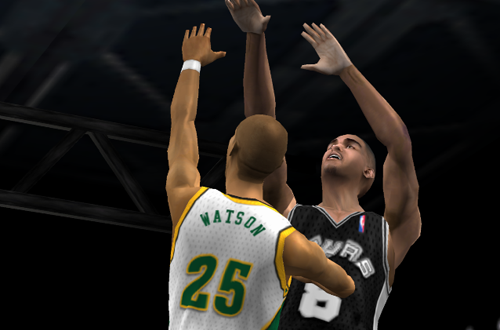 Moving on to a happier story, Earl Watson enjoyed a thirteen year NBA career. He was never a star, but became a solid reserve that also put up decent numbers as a starting point guard for a couple of years. Watson was a second round selection in 2001 – the 40th pick overall – so compared to Tyson Chandler and Eddy Curry, it wasn’t altogether surprising that the Seattle SuperSonics didn’t officially sign him until October 1st. They still had Gary Payton, basically still in his prime and playing 40.3 minutes per game without missing a single contest, so it’s not as though they picked Watson to be their new floor general as a 22 year-old rookie out of UCLA.

Indeed, they clearly didn’t see him as their point guard of the future, either. Although Seattle extended the qualifying offer to Watson following his rookie season, they didn’t match the Memphis Grizzlies’ offer sheet, allowing him to walk. He returned to the Sonics for a second stint following a trade deadline deal in 2006, and also played for the team during their first year as the Oklahoma City Thunder. NBA Live 2002 doesn’t feature his rookie campaign as a Sonic though, owing to his late signing. Since retiring in 2014, Earl Watson has joined the coaching ranks, serving as an assistant and later head coach with the Phoenix Suns, and is currently an assistant in Toronto. 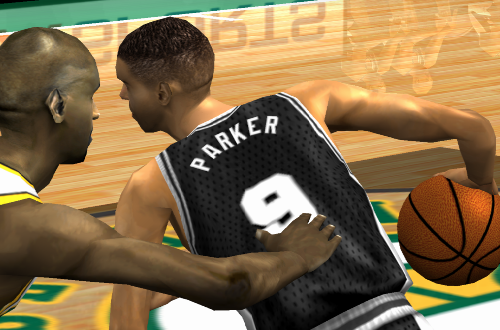 The fifth and final of the noteworthy missing rookies in NBA Live 2002 is Tony Parker, who was drafted 28th overall by the San Antonio Spurs in 2001. Gregg Popovich was initially unimpressed by Parker in a pre-Draft workout, but after being shown a compilation of his best plays in Europe, agreed to a second workout in which the 19 year-old had a much better showing. Parker became the Spurs’ starting point guard four games into the season, and went on to a have an impressive career. The future Finals MVP and NBA Live 09 cover player was absent in NBA Live 2002 however, signing his rookie deal on September 21st; a little under two weeks too late.

Parker was therefore in the same boat as the aforementioned Tyson Chandler and Eddy Curry. In the grand scheme of things, he was definitely more conspicuous by his absence in NBA Live 2002 compared to the Bulls’ missing rookies. Parker started in 72 out of 77 regular season games along with ten Playoff games as a rookie, and his selection was a factor in the Spurs letting veteran Avery Johnson go. Chandler and Curry both started 30 games for the Bulls, but were less impressive. The absence of those Baby Bulls affected my NBA Live 2002 gaming to a greater degree, but the Spurs not having their standout rookie and future All-Star sticks out like a sore thumb.

Incidentally, although these rookies were missing in NBA Live 2002, they were all present in NBA 2K2, which had a roster cut-off date of October 30th. It wouldn’t have done me any good back in the day of course, as NBA 2K2 didn’t see a PAL release. Emulation wasn’t an option then, and I wasn’t about to risk my PlayStation 2 with a mod chip. Earlier release dates have their benefits, namely getting games in our hands by Opening Night, but before official updates were the norm, there was always a risk that key players would be left out. Even with Create-a-Player, the missing rookies in NBA Live 2002 were a drawback, detracting from the appeal of using their teams.