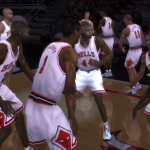 This is Wayback Wednesday, your midweek blast from the past! In this feature, we dig into the archives, look back at the history of basketball gaming, and indulge in some nostalgia. Check in every Wednesday for retrospectives and other features on older versions of NBA Live, NBA 2K, and old school basketball video games in general. You’ll also find old NLSC editorials re-published with added commentary, and other flashback content. This week, I’m going back to NBA Live 2001 to play with the “unbelievable” starting five that was posted in our original Forum many years ago.

There aren’t too many members of our original Forum who are still active, so the legacy and impact of the infamous “I Cannot Believe My Starting Five” thread may not resonate with a lot of people in our community today. I’ve covered it in-depth in a previous Wayback Wednesday retrospective, and mentioned it as one of the most bizarre moments in the history of our Forum, but the short version is as follows. A member by the name of A.L. made a post describing a lineup they’d put together in NBA Live 2001’s Franchise mode, which included Kevin Garnett at point guard.

A.L.’s insistence that point guard was KG’s “natural position” unfortunately derailed an interesting discussion about fantasy draft and trade logic, as well as experimenting with a fun idea for an unorthodox lineup, before it even began. The thread quickly turned into a catch-all for jokes and general banter, and became the first thread in the old Forum to surpass one thousand posts. However, as much fun as it was to take part in, it’s extremely unfortunate that A.L. felt unwelcome due to the way his post was received. Furthermore, it’s a creative idea that’s at least worth messing around with, so that’s what I’m going to do at long last. Let’s take a look back…way back…

The starting five that A.L. came away with after completing a fantasy draft with the fifth pick, and then making a few savvy trades, was comprised of the aforementioned Kevin Garnett, Allen Iverson, Tracy McGrady, Elton Brand, and Marc Jackson (not to be confused with Mark Jackson). Jackson may appear to be the odd man out there, but for a brief moment in 2001, it seemed as though he might be a breakout star after he finally joined the Golden State Warriors some three years after they drafted him. It wasn’t to be, but like so many other promising players, his potential was often realised on the virtual hardwood. The resumes of the other four players speak for themselves. 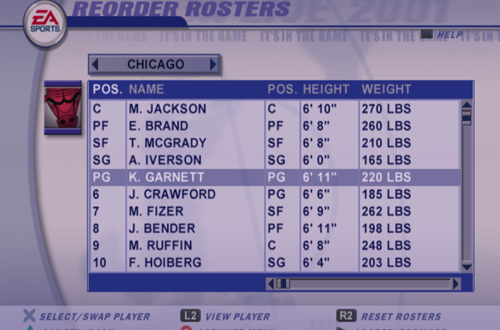 I was intrigued by the idea of trying to replicate A.L.’s fantasy draft and subsequent wheeling and dealing, but first of all, I just wanted to play with the lineup that they’d put together. That could easily be done by customising the roster for an exhibition game; no need to mess around with Franchise mode and trade logic for this part of the experiment. A.L. only mentioned Marcus Fizer and Jonathan Bender as being among the contingent of future prospects making up the bench, so I figured I’d fill in the gaps myself. I decided to control my beloved Chicago Bulls – in reality, they had a rough time in the early 2000s – and just for a change, opt for the PlayStation 2 version.

Dragan Tarlac was traded for Marc Jackson, while Ron Mercer went to Philadelphia for Allen Iverson. I traded Brad Miller to Orlando for Tracy McGrady and Ron Artest to Minnesota for Kevin Garnett; not the first time I’ve fleeced the Timberwolves to bring KG to Chicago! Bryce Drew went to Indiana for Jonathan Bender, and of course Elton Brand and Marcus Fizer were already Bulls. I decided to leave the rest of the Bulls’ bench alone, as it was already rather sorry outside of a rookie Jamal Crawford. After adjusting a couple of primary positions and jersey numbers, I was ready to play. I opted to take on the intact defending champion Los Angeles Lakers.

Chicago’s new-look, fantasy draft-like starting five put them on equal footing with the Lakers, at least on paper in the rankings. They were definitely able to go toe-to-toe with them on the virtual hardwood, too. As is so often the case in NBA Live 2001, the CPU bit on most pump fakes, refused to take advantage of open driving lanes, wasted time with minimal ball movement, and missed a ton of shots. For my part, I couldn’t hit my free throws – the trusty old T-Meter wasn’t kind to me at all – and I didn’t fare much better from midrange and the perimeter. With so many offensive weapons at my disposal however, I still won the game without ever really being in danger of losing. 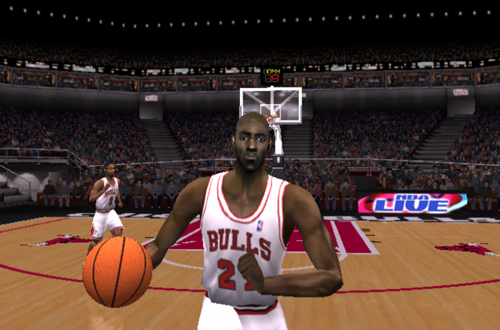 But was the lineup any fun to play with? Well, it probably would’ve been more fun to go up against another team that was stacked due to a fantasy draft, as the only weak link was the matchup between Shaquille O’Neal and Marc Jackson. Shaq went off for 22 points and 21 rebounds playing on twelve minute quarters, but it was a moot point with the way the rest of the Lakers played. In all honesty, playing KG at point guard wasn’t the gamebreaker A.L. claimed it to be. It was suggested that it would help rack up steals, and while KG did finish with four of them, it was just as easy swiping the ball with Marcus Fizer, given the general lack of reach-in calls in NBA Live 2001.

There was really no advantage or disadvantage at putting Kevin Garnett at the point. It was an amusing sight to see him matching up with Ron Harper and Derek Fisher, but apart from a couple of easy blocks, there wasn’t much of a benefit. There were no drawbacks either, as I was able to handle the ball with him as easily as I did with Iverson, McGrady, and Crawford. I was able to make a couple of nice drives after spinning past KG’s smaller defenders, but generally speaking, putting him out on the perimeter took away scoring and rebounding opportunities. It didn’t cost me the win so I wasn’t harmed by it, but again, Garnett playing point guard didn’t break the game.

Perhaps the best thing I can say about the idea is that it works. If a fantasy draft and trades left you without a star point guard and you had those players, you could indeed run with them as your starting five without any major issues. Of course, it would be just as easy – and far more realistic – to make AI the point guard with T-Mac playing shooting guard, and move KG to small forward alongside Brand and Jackson in the frontcourt. All things considered, it’d be a better use of his skillset, and put him in better spots to score and rebound. I’d have to say that A.L. was greatly exaggerating the merits of his unbelievable starting five, though not the talent that it boasted. 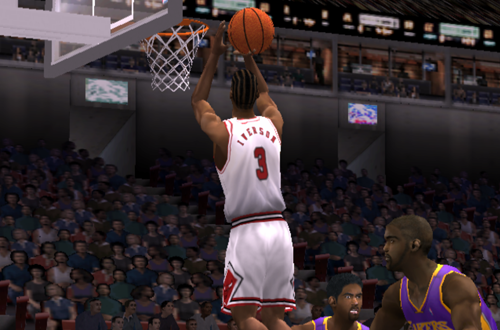 At the same time, we were probably too quick to dismiss the idea without trying it out ourselves. True, the discussion was derailed from the start by the assertion that KG’s “natural position” was point guard, and if it’d had been presented differently – say, “here’s a wacky idea I tried and it was a lot of fun” – folks might’ve been slightly more receptive to the suggestion. In retrospect, it also spotlights the limitations of NBA Live 2001’s engine and ratings system. KG’s attributes obviously reflected his all-around abilities, but they shouldn’t have been enough to make him as adept at playing point guard as the top-rated floor generals who were in fact at their natural position.

That issue, along with the fantasy draft and trade logic, were all valid and important talking points that we glossed over, just because someone was wrong on the Internet. Even though it led to memorable memes and banter in the original Forum, it also drove away someone who was willing to enthusiastically discuss the game and how they were playing it, and suggest an interesting (if odd) idea to try out. Again, I do think they were exaggerating its benefits, but I also wish we had the maturity and open-mindedness to give it a go. Having finally played with the unbelievable starting five, I’m somewhat underwhelmed, but also feel a sense of satisfaction and closure.

Before being done with the idea, however, I wanted to attempt building the starting five in Franchise mode. Here I had to switch back to the PC version, as the mode isn’t available in the PS2 release. Controlling the Timberwolves, I followed A.L.’s lead and hit random order for the fantasy draft until I got the fifth pick, selected KG, and then the best available player after that. I managed to get everyone except AI and Jackson, both of whom went to Vancouver and couldn’t be pried from the Grizzlies’ grasp! On my second attempt, KG went fourth, and I couldn’t get him or Jackson. After a third attempt, I gave up. It seemed I was always going to end up a couple of players short. 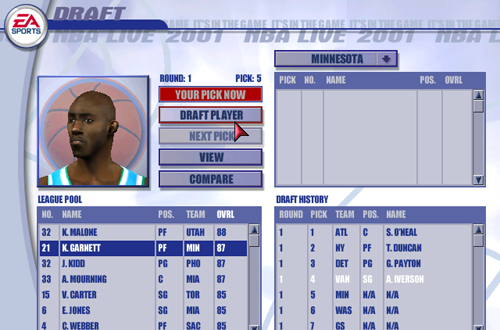 It’s not surprising, not knowing the exact moves that A.L. made, nor having the exact same outcome in my fantasy drafts. The scenario would have to be just right as far as where all the players landed, not to mention the players that I picked, in order to offer trades that would work under the salary cap and be accepted by the CPU. Regardless of the merits of playing KG at point, assembling that unbelievably talented starting five would take a fair amount of luck on top of savvy manipulation of the game’s trade logic. I certainly do believe that A.L. was able to assemble that starting five, but I’ll have to admit defeat in replicating it without cheating or using a custom roster.

Once again though, I’m glad that I at least explored the idea, all these years later. I can’t say that the starting five was as exciting to play with as A.L. suggested, but then I’m not really one for stacked teams and fantasy drafts to begin with. I do admire their skill in acquiring all of those players, and agree that the lineup does work without any problems or drawbacks in gameplay. As for its supposed benefits, I’m more sceptical as the gameplay mechanics aren’t sophisticated enough for the odd scenario to make a huge difference. That’s the real issue; that KG could easily be used as a point guard in NBA Live 2001 without any penalties, albeit without it being an advantage, either.

In hindsight, it demonstrates just how far basketball video games have come. Using KG at point guard probably wouldn’t be as easy, or particularly advantageous, in a modern game. Player-specific animations and greater differentiation in the effects of ratings have seen to that. At the same time, we can see how attitudes now differ. Between exploits and the Out of Position cards in MyTEAM, and the general idea of “position-less basketball”, A.L.’s post probably wouldn’t draw as much scorn today. Mind you, it also wouldn’t inspire the same fun banter, and I believe that would’ve been a greater loss than rejecting the suggestion to play with an unusual starting five.

lol, you have a fetish for this team man… glad you were able to finally realize it. 😉

I’ll admit that it definitely takes me back to a memorable time in our community, in a game I have nostalgia for (despite its issues), so the idea had a lot of appeal from that perspective! It was also well overdue for someone to actually try it out and talk about it rather than give A.L. a hard time, so figured it’d be a fun idea. Not as fun as advertised, but still an enjoyable trip down memory lane!