Wayback Wednesday: The Way Back in NBA 2K19 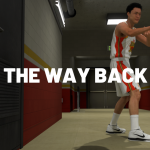 This is Wayback Wednesday, your midweek blast from the past! In this feature, we dig into the archives, look back at the history of basketball gaming, and indulge in some nostalgia. Check in every Wednesday for retrospectives and other features on older versions of NBA Live, NBA 2K, and old school basketball video games in general. You’ll also find old NLSC editorials re-published with added commentary, and other flashback content. This week, I’m taking a look back at the MyCAREER story in NBA 2K19, which was titled “The Way Back”.

Since NBA 2K19 is now going on four years old and its servers have been shut down, I believe that it now fits the bill for wayback content. Hey, that’s the rule I set when I looked back at the story of DJ in NBA 2K18 in 2020, and as I said at the time, it’s my feature, so I’ll make and break the rules as I see fit! Besides, we’ve had a couple of fairly well-written and acted MyCAREER stories since then. In particular, The Long Shadow in NBA 2K21 was a strong candidate for the best tale the mode has ever had. With that in mind, it’s worth looking back at NBA 2K19’s story to see how it holds up.

After all, when NBA 2K19 came out, The Way Back was likewise one of the best stories we’d played through in MyCAREER. The journey of AI didn’t just take us from college to the NBA, but around the world. I’ll throw out an obligatory spoiler warning as we take a look back…way back…at The Way Back…

The Way Back begins with preparations for an introductory press conference, where a player named AI is having his particulars taken down by a rep for a Chinese league team. Like the tournament registration form in NBA 2K18’s story, this provides the backdrop for the character creation options. After we meet/create AI, we flash back to a point where a lot of MyCAREER stories usually end: the NBA Draft. AI entered the draft alongside his college teammate Corey Harris, who is drafted by the Los Angeles Lakers. By the end of the night, AI’s name hasn’t been called, leaving him crestfallen. This explains how he came to be playing overseas with the fictional Shanghai Bears. 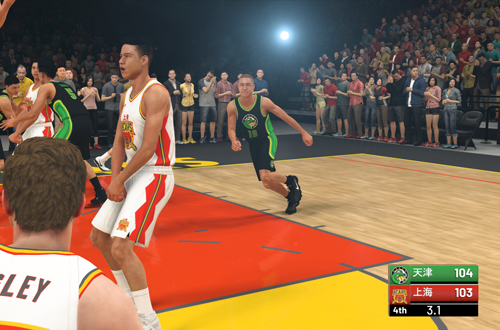 Our first taste of gameplay was actually a Quick Time Event, in which we’re tasked with getting the ball to a Chinese league veteran to take the final shot and try to win the game. It’s here that we discover the lengths 2K went to with the presentation. The names of the teams on the scoreboard, and even the commentary, are in Chinese. It really drives home the point that AI is a long way from playing in the NBA. It’s also clear that AI really doesn’t want to be there, and feels that he should be in the NBA already. The chip on his shoulder as he deals with his bruised ego is necessary for his character to show growth throughout the story, but it can also be a little off-putting.

A handful of games in the Chinese league provided an opportunity to level up, while also introducing characters such as “The Flying Dragon”, another prospect with NBA aspirations. An exhibition game against a team of NBA stars leads to a reunion with Corey Harris. During the game, there’s another Quick Time Event where AI dunks over Harris, and has the choice of whether or not to help him up afterwards. As you’ll later discover, your decision here actually affects the outcome of the story, serving as an indication of AI’s maturity (or lack thereof). It’s an interesting twist and callback, because it pays off long after most of us have probably forgotten about that story beat.

AI’s final days in China also introduced a recurring element in The Way Back: the mini-games. During a cutscene, AI and Corey discover a fictional NBA 2K8 arcade machine, which reminds them of playing the game in college; presumably, no one in the dorm had any of the newer releases! You actually get to play a game of “NBA 2K8”, which is really just an exhibition between the 2008 Rockets and 2008 Celtics. However, a filter adds a retro aesthetic, the menus are old school, and even the right stick dribbling controls are disabled, as they hadn’t been implemented yet. You can skip it, but it’s actually a really nice touch that pays homage to the series’ history. 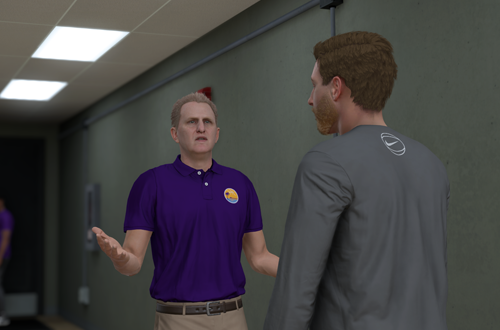 Thanks to interest from the Lakers, AI returns to America; incidentally, this is where the demo version of The Prelude ends. AI is naturally excited, but it seems awfully early for him to have completed The Way Back. Indeed, it’s the South Bay Lakers of the G League that have acquired him, leading to an awkward moment with Coach Darren Stackhouse, played by Michael Rapaport. Feeling slighted, AI appeals to Corey Harris, who basically tells him he needs to keep working hard, and – in not so many words – grow up as well. It’s difficult to disagree with him, though you do also feel for AI when the Lakers trade him to the Fort Wayne Mad Ants for a sandwich.

Playing in the G League provided further opportunities to earn VC and MyPOINTS to unlock Badges, and also included more of the aforementioned mini-games. While AI is riding with veteran player and mentor Paul Tatum, they pull up at a farm where a couple of kids are playing 1-on-1 on a makeshift court outside a barn, and turn it into a 2-on-2 contest. There’s mini-basketball at a carnival where the Mad Ants are making an appearance. It’s here AI meets his love interest, Nikki Davis. During the games in the G League, there were also goals related to the story that earned additional VC if completed. A few of the cutscenes also featured dialogue/story branching options.

There are some fun cameos by characters from previous MyCAREER stories, such as Sheldon “ATM” Middleton forming a duo called “Smoke & Mirrors” with Jackson Ellis. The latter is attempting a comeback from the injury that ended his career after NBA 2K14. Ellis is a minor antagonist this time around, and although he’s as arrogant as ever, he’s no match for the two main antagonists of The Way Back: Marcus Young, and Zack Coleman. As I noted when I ranked the Top 5 Antagonists in MyCAREER Stories, Young and Coleman are two of the best villains in MyCAREER stories to date, being genuinely nasty and underhanded in what they do to AI in The Way Back. 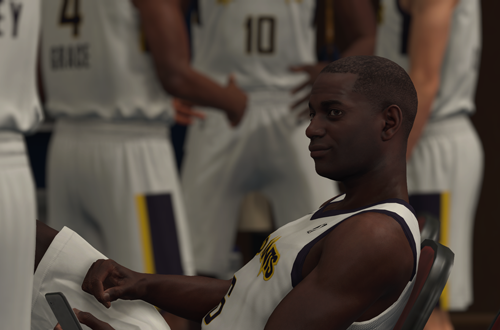 Marcus Young is another headstrong player looking to use the G League as a stepping stone to the NBA, and makes it clear that he considers a talented teammate a rival to be stomped on. It’s obvious that there’ll be a showdown at some point, especially after a tense scene during a road trip. Zack Coleman, played by Haley Joel Osment, works in a diner but has aspirations of becoming a big shot in NBA circles. He becomes AI’s social media manager, though it’s obvious that he’s going to stab him in the back at some point. He does indeed do just that, helping Marcus to get AI kicked off the team and vilified in the Fort Wayne community, through leaking an out-of-context video.

Although Marcus and Zack being villains is hardly a twist, they’re nevertheless well-written and effective antagonists. Even though AI has his faults, you do sympathise with him, and want to get revenge on them. Unfortunately, Zack never really gets his comeuppance, but you are able to best Marcus when you finally make it to the NBA. When it looks like AI’s dream is over, Corey Harris reaches out to him. This is where your earlier decision pays off. If you helped him up after posterising him, Harris gets you a gig with the Lakers. If you didn’t, you end up with the Timberwolves. Either way, you go head-to-head with Marcus Young, who’s now on the San Antonio Spurs.

Win or lose, and whether or not AI outperforms Marcus Young, the story ends with him getting his foot in the door after his cameo appearance in the final game of the season. At this point, AI enters the 2018 offseason as a free agent. Somehow, he’s still classified as a rookie during the 2018-19 campaign, an odd situation that’s actually acknowledged by Greg Anthony on commentary. It is a plot hole, but putting that aside, it’s a satisfying ending to a well-written and well-acted story. It’s definitely different to previous MyCAREER tales, and in a much better way than the saga of DJ was the year before. It was far more plausible, with an appropriate dramatic flourish. 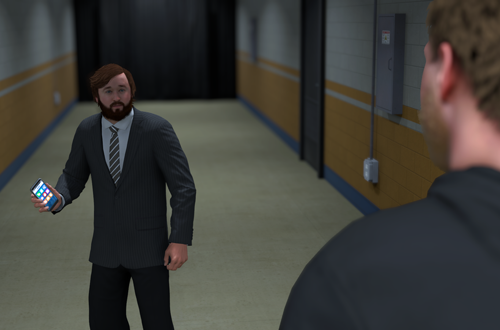 The strength of The Way Back was in its writing, acting, and production values, but also the way it integrated gameplay. Games in the G League and Chinese league, and the final showdown with Marcus Young in AI’s NBA debut, tie in with the ongoing narrative. Mini-games also break up the cutscenes – which could also be skipped for the first time – and there was some interesting variety there. AI could be a frustrating protagonist at times when he came across as impatient and entitled, but for the most part, he was likeable. He meets some interesting characters including some genuinely despicable villains, and there was good humour that provided some needed levity.

However, the story does have some drawbacks. There is some railroading with the dialogue and story-branching options, essentially offering two similar paths to the same destination. The plot hole with AI remaining a rookie in what should be his sophomore season is something that could’ve been avoided if he instead debuted in a Summer League game, or some other offseason/preseason exhibition. The key story beats could remain the same, with a reason for the game not counting. The Spurs were also an unusual team for Marcus Young to join, as it’s doubtful that Gregg Popovich would tolerate his abrasive personality; or his willingness to backstab teammates!

As it stands though, The Way Back did produce a fun coincidence. Late in the 2018 season – where The Way Back concludes – Andre Ingram finally made it to the NBA after years of playing overseas and in the G League. He even signed with the Lakers! It should be noted that NBA 2K19 was obviously well into production by the time that happened. The Way Back would’ve already been written, and possibly wrapped filming by that point as well. To that end, Ingram’s journey couldn’t have served as inspiration for the tale. It’s still an entertaining coincidence, and the timing couldn’t have been better given the setting, back story, and other details of The Way Back. 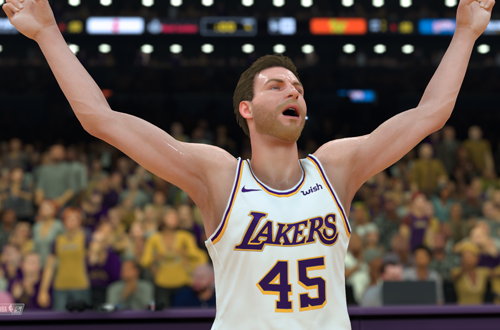 MyCAREER stories remain a divisive concept. A lot of gamers would prefer they weren’t in the game, and even though we can skip them these days, it’s often rather disadvantageous to do so. Since they’re not going anywhere however, it’s important that they’re done right. Even as 2K experiments with a new open world approach on Next Gen, NBA 2K19’s tale remains a benchmark for narrative quality and enjoyable characters. Unfortunately, The Way Back is no longer playable now that NBA 2K19’s servers are offline. To that end, unlike AI, gamers have no way back. That’s a shame, but The Way Back was a tale worth telling then, and one worth remembering now.