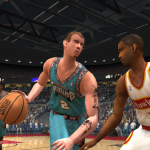 This is Wayback Wednesday, your midweek blast from the past! In this feature, we dig into the archives, look back at the history of basketball gaming, and indulge in some nostalgia. Check in every Wednesday for retrospectives and other features on older versions of NBA Live, NBA 2K, and old school basketball video games in general. You’ll also find old NLSC editorials re-published with added commentary, and other flashback content. This week, I’m taking a look back at throwback jerseys in basketball video games.

Yes, it’s a throwback article about throwback jerseys; the circle is complete! Just as the real NBA celebrates its history and recognises great teams and players from the past, so too does the virtual hardwood pay tribute to yesteryear. I’ve covered several examples in Wayback Wednesday, from the appearance of retired players as secret characters and the introduction of Legends, to modes such as The Jordan Challenge and NBA’s Greatest. I’ve also mentioned how I enjoy the retro content in Ultimate Team and MyTEAM in some of my other features.

Something that I haven’t touched upon yet is throwback jerseys. They’ve obviously become a big part of basketball culture, as Hardwood Classics jerseys and retro uniforms for current players are fashionable to wear. NBA teams themselves will also celebrate specific eras by wearing throwback jerseys on designated nights. This trend has been around for some time, and it’s come to be represented in NBA video games as well. What is the history of throwback uniforms on the virtual hardwood? Let’s take a look back…way back…

Interestingly, throwback players predate throwback jerseys in video games. You’d think that the latter might come first, seeing as how they’d be easier to license than the likenesses of retired players, but Legends appeared first; both unofficially as Easter eggs, and officially as advertised content. Although our community created retro jersey patches for NBA Live almost as soon as we were able to modify the art files, old school uniforms wouldn’t officially appear in the game until NBA Live 2003. That was also the first time we were able to choose the jerseys each team wore. Prior to that, we’d have to externally swap files in and out to rotate in alternates and retros. 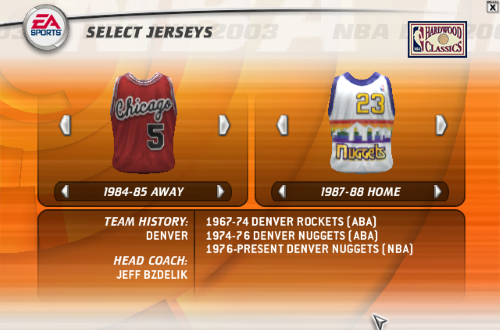 The selection of jerseys was very limited to say the least. Every NBA team in NBA Live 2003 had just one throwback, home or away, in addition to their primary jerseys and a current alternate (if they had one). Still, it was extra content, and allowed us to change things up. Real teams had been wearing throwback jerseys to celebrate certain anniversaries and milestones since the 90s, such as the league’s 50th Anniversary in 1997. The practice gained popularity in the early 2000s, making the addition of the throwback jerseys in NBA Live 2003 very timely. The turn of the millennium and a generation of stars retiring brought on a wave of nostalgia for old school designs.

This is apparent from the array of retros in the game, which span several decades. The newest uniforms are the 1996 road throwbacks for the Grizzlies and Raptors, while the oldest retro jerseys belong to the Lakers (1962 Away) and Celtics (1963 Away). Many popular designs are included, such as the Bulls’ 1985 road jersey with the Chicago script, Denver’s colourful skyline jersey from the 80s and early 90s, and the Magic’s black pinstripe uniform. Some of the included jerseys celebrated significant years in team history, such as the Bucks’ 1971 and Knicks’ 1973 road jerseys. Jerseys that were being worn on Hardwood Classics nights were also generally represented.

A wider selection of throwback jerseys was added in NBA Live 2004. Each team now had at least one pair of matching home and away retros, while some teams also had an additional old school uniform or two, not always a matching set. This was a welcome change, as the most of the retro jerseys in NBA Live 2003 had been road uniforms. Not every jersey was available out of the box, however. Several, often including the other half of a matching set, had to be unlocked by accumulating NBA Points and “buying” them from the NBA Store. This was also how all other jerseys, current and retro, could be unlocked for use in the 1-on-1 and Practice modes. 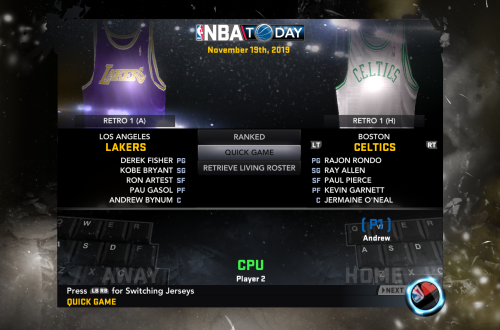 Early NBA 2K games had the Legends on the All-Decade squads wear retro jerseys from their original teams, but selectable throwbacks for regular teams weren’t added until ESPN NBA Basketball (aka NBA 2K4). They were initially locked though, and were unlocked by winning five games with a team from each Division. Beginning with ESPN NBA 2K5, retro uniforms were available by default. However, as with the current jerseys, road retros couldn’t be selected for the home team and the road team likewise couldn’t wear home throwbacks. This restriction was lifted in NBA 2K11, though the modest selection of throwbacks remained virtually unchanged for years.

Despite introducing them first, NBA Live’s approach to including throwback jerseys has been far less enthusiastic since. The final PC, PS2, and Xbox releases did keep a selection of retro jerseys, but with the series’ jump to the next generation, the retros were missing from the Xbox 360 version of NBA Live 06, along with the Legends. Retro jerseys finally returned in NBA Live 10, with each team featuring at least one home and away throwback. NBA Live 14 and 15 had only one retro per team, but NBA Live 16 expanded the selection. NBA Live 18 and 19 only featured specific retros for the teams who wore them on Hardwood Classic nights during those seasons.

Unfortunately, throwback jerseys are no longer collectable items in Ultimate Team. NBA 2K’s MyTEAM offers a host of retros however, owing to their roster of retro squads and a host of throwbacks for every team. In fact, after a number of years where some of the included retro teams’ jerseys weren’t available for the current teams to wear, NBA 2K19 significantly expanded the selection of retros, giving teams access to almost every jersey in franchise history. A few short-lived jerseys are still missing as of NBA 2K20, but if you want to stage your own Hardwood Classics nights in any of the game modes, you’ve got plenty of options to choose from. 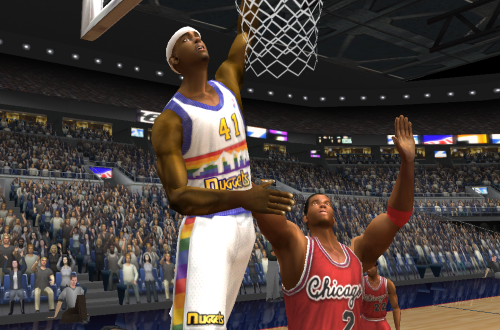 NBA Live and NBA 2K aren’t the only games to make use of throwbacks. Similar to the approach to the All-Decade teams in early NBA 2K games, retro players in the 2010 reboot of NBA Jam and its sequel On Fire Edition wear old school jerseys rather than their teams’ current uniforms. NBA Street Vol. 2 and NBA Street V3 did the same thing years earlier, with all the Legends wearing an era-appropriate jersey. It’s a much better look than simply having those historical players wearing the current uniform, and really makes them stand out. Other sim-oriented games such as Sony’s NBA series have also included various throwbacks on the jersey selection screen.

As with current uniforms, throwback jerseys in video games haven’t always been entirely accurate. There have been issues with the size, position, and kerning of the numbers. Inaccurate colours have also been a recurring issue, particularly in NBA 2K which has introduced a lot of new throwbacks since The Jordan Challenge and NBA’s Greatest increased the amount of historical content. It’s provided modders with annual projects on PC, though the results out of the box have been more accurate in recent years. The missing jerseys also provide modders with something to work on, while the ones that are included facilitate several great retro roster projects.

With Hardwood Classic nights firmly established as regular events in the NBA, throwback jerseys have become vital content in basketball video games. Being such a big part of basketball culture and fashion, they’re very popular player clothing items in The One in NBA Live, as well as MyCAREER and its connected modes in NBA 2K. Along with the jersey selection options themselves, it took a while for them to be implemented, but they’ve been put to great use and enhanced the basketball gaming experience in a variety of ways. Everything old is new again, as the saying goes, and it’s fun to be able to rock a retro aesthetic on the virtual hardwood.