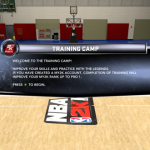 This is Wayback Wednesday, your midweek blast from the past! In this feature, we dig into the archives, look back at the history of basketball gaming, and indulge in some nostalgia. Check in every Wednesday for retrospectives and other features on older versions of NBA Live, NBA 2K, and old school basketball video games in general. You’ll also find old NLSC editorials re-published with added commentary, and other flashback content. This week, I’m taking a look back at Training Camp in NBA 2K12.

In recent years, it’s been noted that the NBA 2K series has been increasingly geared towards appealing to the hardcore online crowd. In a Reddit post that I’ve mentioned before (and no doubt will again), a former EVE Online developer has noted the series’ increasing focus on catering to elite players, and apparent hostility to newer gamers who are trying to hone their skills on the virtual hardwood. It’s fostered the “get gud” mindset, while failing to provide the onboarding, opportunities, and fair matchmaking that would allow less experienced players to strive for that.

As noted in that Reddit post, it wasn’t always that way. Earlier this decade, the NBA 2K games were going out of their way to teach gamers all of the basic and advanced controls, in an environment that was both helpful and creative. Those efforts began with the introduction of Training Camp in NBA 2K12, a feature that would carry over into NBA 2K13 and prior gen NBA 2K14. Let’s take a look back…way back…

Practice modes in basketball video games have varied in depth and quality throughout the years. Many of them, particularly the ones included in NBA Live, have consisted of a free shootaround with a single player. They were decent enough as far as messing around and getting a feel for the controls, but obviously quite limited. NBA 2K would go the extra step of offering team scrimmages and free throw practice, which was a step in the right direction. NBA Live would eventually implement the Academy to teach controls and in-game scenarios, but 2K landed on a great method of onboarding when they added Training Camp in NBA 2K12. 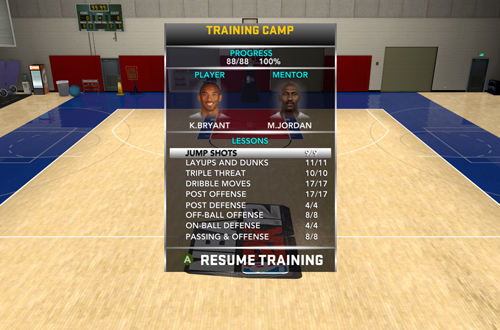 Rather than simply listing the method of performing moves, or throwing gamers in at the deep end with full drills, Training Camp stepped us through the controls one drill at a time. The drills took the form of one-on-one lessons with NBA Legends, which was also a great tie-in with the new NBA’s Greatest mode. Beginning with a tutorial on jump shots and progressing through all the offensive and defensive controls, each lesson involved controlling a current star player who was being mentored by an NBA Legend, as if working out with them during the offseason. A cutscene would explain and demonstrate the move, and then you would have to successfully perform it.

The cutscenes included an overlay with the controller, which showed what had to be done as your mentor performed the move alongside it. If you failed at any point once it was your turn, the drill immediately stopped, explained where you went wrong (too slow on the button, held the stick in wrong direction, etc), and you had to start over. Additional tips were offered upon successfully completing a drill, and each section of the tutorial had a “final exam” of sorts where you had to take what you had learned, and use it against the featured NBA Legend in a one-on-one scenario where the goal was to achieve a set number of points in order to pass the test and advance.

This proved to be an effective teaching method. While the approach of reading a manual (on-screen or otherwise) and then trying out the moves in a free shootaround is better than no onboarding at all, the in-depth tutorials of Training Camp made sure that you were performing the moves correctly. NBA 2K’s controls were slightly more complex at that time, and it was easy for a novice to overlook some of the important post moves and advanced shooting controls. I struggled to adjust to Isomotion after so many years playing NBA Live and learning its control scheme, and though I did find some drills frustrating, Training Camp made me feel a lot more comfortable with 2K. 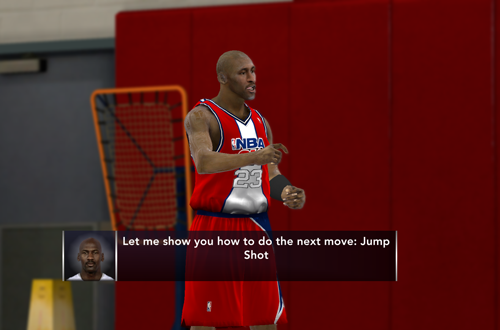 There were a couple of drawbacks to that first version of Training Camp in NBA 2K12. You had to progress through drills in a continuous lesson; you weren’t able to go back to the main Training Camp menu and pick something else, even if you had already completed all of the drills. This was annoying if you were brushing up by replaying part of a lesson, as you had to quit in order to repeat the drill or to select a new one. The mode also didn’t make a point of explaining how the controls changed on the Camera Relative setting. Coming from NBA Live and its Absolute controls, I was often confused when I tried to put what I’d learned into practice in real games.

When Training Camp returned in NBA 2K13 and NBA 2K14, the first problem was addressed as there was more flexibility when replaying and advancing through all the different drills. Unfortunately the tutorials still didn’t explain the situation regarding the Camera Relative controls, though by that point it felt like less of an issue as the dribbling controls now utilised the right stick in a manner similar to NBA Live. The NBA Legends were no longer featured as mentors, however. In NBA 2K13, current stars mentored fictional user-controlled players, while NBA 2K14 paired up the Class of 2013 rookies with All-Stars including cover player LeBron James.

It was a shame to lose the Legends, as they definitely added to the charm of the mode. Looking back, it wasn’t altogether surprising, as the historical content has lost much of the focus and depth that it had in NBA 2K11 and NBA 2K12. At the same time, it makes sense to focus on the active stars, and feature them as players that the younger talent – as represented by the Class of 2013 rookies in NBA 2K14 – would learn from and look up to. The mode itself was still very helpful in teaching gamers the controls, while the more flexible approach to picking and choosing lessons and backing out of them after achieving 100% completion was far more user-friendly. 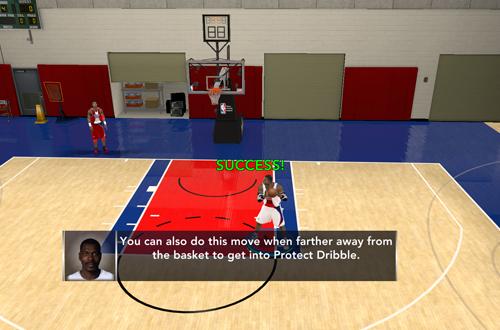 Training Camp would be dropped in NBA 2K15 onwards, and while the new 2KU is a solid resource with control listings, a few tips, and videos demonstrating the moves, it isn’t a proper tutorial. The training game offers up explanations at random during a scrimmage, but it doesn’t provide the same focus on teaching controls and techniques. Admittedly, NBA 2K’s controls are simpler and more intuitive than they used to be, even when it comes to the advanced moves. The controls have also been far more consistent year to year, and with the series’ immense popularity, millions of gamers are very familiar with NBA 2K’s controls, strategy, and overall gameplay.

Still, I would suggest that there is still a place for a mode like Training Camp in the new NBA 2K games. As I mentioned back in April, Mortal Kombat 11 has gone to great lengths with its onboarding, not only explaining the controls but also technical details such as frame data. With NBA 2K expanding into the realm of eSports with the NBA 2K League, providing basketball gamers with a similar set of tutorials would make a lot of sense. Proper matchmaking should probably be a higher priority, but 2K could be doing a lot more to foster their competitive scene, as well as welcome new offline gamers, by providing the tools to help everyone sharpen their stick skills.

Nevertheless, Training Camp remains one of the better ideas that we’ve seen in NBA 2K games over the years. It taught gamers what they needed to know to be as good as they possibly could be on the sticks, in a fun and creative setting that didn’t feel like a dry tutorial or practice mode. Personally, I’ll always fondly remember it as the mode that helped NBA 2K become far more accessible to me, by making the more complex controls feel a lot less daunting. It’s another example of how not everything is better in newer games, and that ideas from past titles are worth revisiting and revamping in future releases.