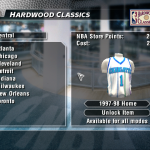 This is Wayback Wednesday, your midweek blast from the past! In this feature, we dig into the archives, look back at the history of basketball gaming, and indulge in some nostalgia. Check in every Wednesday for retrospectives and other features on older versions of NBA Live, NBA 2K, and old school basketball video games in general. You’ll also find old NLSC editorials re-published with added commentary, and other flashback content. This week, I’m taking a look back at the practice of including unlockable jerseys in basketball video games.

I’ve previously covered throwback jerseys in basketball games, noting that their inclusion also marked the arrival of uniform selection options. Before the addition of jersey selection screens, teams with secondary road uniforms would wear them at random in exhibition play, or on Sundays in Season or Franchise modes. In the PC versions of NBA Live, we were also able to manipulate the files to switch them in and out, but it was far less cumbersome once we could easily choose which uniform we wanted a team to wear via an in-game option.

The ability to switch between a selection of alternate and retro jerseys for every team was (and is) a great feature. After NBA Live 2003 introduced the functionality, we were keen to see more content in NBA Live 2004 and beyond. New retro uniforms would indeed be added in future games, but the expanded selection also saw the introduction of unlockable jerseys. The concept has since fallen out of vogue, but for a while there, it was a standard feature in both NBA Live and NBA 2K. Let’s take a look back…way back…

As I mentioned in my look back at throwback jerseys, NBA Live 2003’s selection of retro uniforms was limited to one per team. This was obviously an improvement on having no retro jerseys at all, and again, the ability to select jerseys in general was most welcome. However, there were more retro road uniforms than home jerseys, so it didn’t always work out very well if you wanted to have both teams wearing their throwbacks in order to stage your own Hardwood Classics night. To that end, there was definitely interest in seeing the selection expanded upon. We at least wanted to see every team have a matching set of home and away retros to choose from. 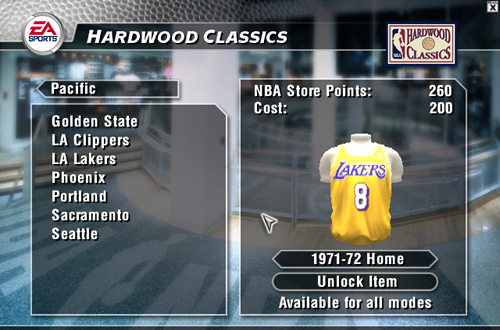 NBA Live 2004 delivered in that regard, not only providing a matching set of home and away retros for each team, but in some cases, an extra throwback or two (though not necessarily a matching set). Each team also had a home and away practice jersey, worn by default in the 1-on-1 mode. The catch was that many of the throwback uniforms – and in some cases, the other half of a matching set – weren’t available by default. They were unlockable jerseys, a reward to be earned before they could be played with. We were also able to unlock regular jerseys for use in the 1-on-1 and Practice modes, and practice gear for use in regular NBA games.

Unlockable jerseys were unlocked via the NBA Store menu. Performing certain in-game tasks such as scoring over 40 points with a player or winning a game by double digits would earn NBA Points, the currency used to buy items from the NBA Store. This was well before microtransactions became a part of video games, so unlockable jerseys could only be accessed by patiently acquiring them with the in-game reward points, or if you were feeling impatient, using an “Unlock All” code. On PC, it was also possible to edit the database files to set any or all of the jerseys to unlocked, though for most people it was quicker and easier to just punch in the code.

In some ways, this was an ill-advised approach. Unless you looked into what the NBA Store was all about, you could miss that there were unlockable jerseys and other items in the game. Because the jerseys didn’t show up on the selection screen until they were unlocked, it was easy to think that the selection out of the box was all there was, suggesting some teams missed out on matching sets of retros. I don’t recall that being a huge issue though, and indeed, the unlockable jerseys, shoes, and other items in the NBA Store gave us goals to work towards. Aiming for statistical goals kept games fresh, interesting, and challenging, and allowed us to choose our own rewards. 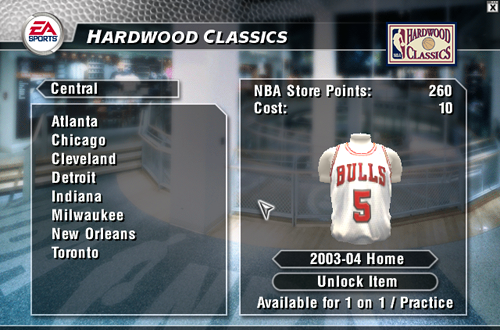 The NBA Store was retained in NBA Live 2005, but a new type of unlockable jerseys was also added. A handful of teams including the Seattle Supersonics, Atlanta Hawks, Dallas Mavericks, Golden State Warriors, and New Orleans Hornets, unveiled new alternate uniforms for the 2005 season. Rather than being available out of the box, or unlockable in the NBA Store, these jerseys were accessed by entering codes. NBA Live 06 did the same thing, not only locking some alternates out of the box, but also the new home and away jerseys for the Indiana Pacers, and 2006 East and West All-Star uniforms. NBA Live 07 also featured jerseys that were unlockable via codes.

This trend even continued onto the next generation. Outside of the free DLC for the new Oklahoma City Thunder jerseys in NBA Live 09, all primary home and away jerseys were updated and immediately available. However, as of NBA Live 10, many of the alternate jerseys still weren’t available to select until they were unlocked with a code. In fact, some of the retros in NBA Live 10 were also among the selection of unlockable jerseys. This was done to reveal the jerseys and make them accessible as they were unveiled in real life. These days, with the ease of patching in new content, they’re simply pushed through in updates and added to the jersey selection screen.

NBA 2K has taken a similar approach to unlockable jerseys throughout the years. In fact, the first game in the series to feature retro uniforms – ESPN NBA Basketball, aka NBA 2K4 – required us to win five games with a team from each Division in order to unlock them. In NBA 2K6 onwards, the series took a similar approach to NBA Live, locking alternate uniforms out of the box and making use of a codes screen to access them. As with NBA Live 06, the Pacers’ new uniforms for the 2006 season were hidden in this way, along with the All-Star jerseys in NBA 2K7, NBA 2K8, and NBA 2K9. Unlockable jerseys remained in the games in some form through NBA 2K13. 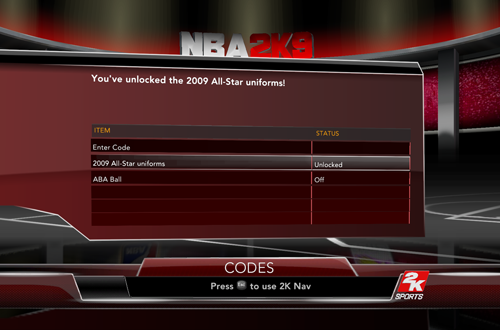 Once again, the practice has fallen out of favour this generation, in large part due to the ease of adding new content after a game has launched. On previous generations, that content had to ship on the disc, with codes being used to reveal and unlock it at the appropriate point in the season. Both the codes and the virtual store approach were a way of rewarding players with new content, and these days, there are other ways of doing that. The team building and career modes receive new content regularly, though in the case of NBA 2K in particular, that content has been integrated into a recurrent revenue system. NBA Live’s Reward Points are more similar to the old NBA Points.

Still, the idea of unlocking teams’ jerseys is antiquated now, a throwback to the days before regular content updates and microtransactions. There’s also an expectation that content like retro uniforms will be immediately available in Play Now and franchise modes, and anything that does need to be rolled out over the course of the season can just be added in a patch. With all the grinding that’s necessary to level up a player or collect cards to build a team, I don’t think many gamers would have much interest in unlockable jerseys as well. They’re no longer viable and satisfactory rewards for playing through the modes that are the most popular with basketball gamers today.

Nevertheless, like many outmoded features, there’s something nostalgic about them. They’re a throwback to a time when new content could be unlocked simply by playing the game, and there weren’t any recurrent revenue mechanics tied to cosmetic items. They’re a vestige of cheats menus, which do kind of live on in NBA 2K’s Locker Codes, though it isn’t quite the same. They demonstrate how post-release support has expanded, but also how game design and culture has changed. These days, in-game stores tend to evoke cynicism, frustration, and hostility. In the days of unlockable jerseys, however, visiting the NBA Store was always a rewarding experience.

At first I was trying to be patient and earn points to buy an unis and other stuff in Live 2004, but quickly became impatient and punch a code. It took too much time and too slow to collect them all. I’m glad they ditched that idea in later games however NBA Store in Live 2004 got great presentation, much better than in later editions.

I know what you mean. I’ve got a feeling I used the code as well after unlocking a few I wanted. Loved the look of the NBA Store in 2004 and 2005.