Wayback Wednesday: Why Many of Us Like Going Wayback 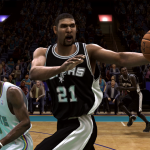 This is Wayback Wednesday, your midweek blast from the past! In this feature, we dig into the archives, look back at the history of basketball gaming, and indulge in some nostalgia. Check in every Wednesday for retrospectives and other features on older versions of NBA Live, NBA 2K, and old school basketball video games in general. You’ll also find old NLSC editorials re-published with added commentary, and other flashback content. This week, I’m exploring the reasons why we like to go wayback, and revisit old favourites and other retro basketball games.

I’ve decided to do something a little different this week. Rather than a retrospective of a game or specific feature from an old title, I’m discussing the reasons why gamers like myself enjoy revisiting basketball games from yesteryear; indeed, why I go so far as to produce a weekly feature about the past. Nostalgia is far from unpopular, but in recent years, it also feels like there’s been a significant backlash against it. It’s likely a sign of a generational gap, and while younger gamers may not feel the need to go wayback as some of us older gamers do, I believe it’s something that comes with age.

On top of that, the passage of time leads to titles becoming nostalgic and historically significant, and that’s an interesting process. As we evaluate the best way to move forward, it’s also beneficial to look back at the past. To that end, let’s take a look at why we like going wayback…and in some cases, really way back…

Nostalgia is something that we have to age into. It’s not something that everyone likes to indulge in of course, and some people are all about moving forward, even if they do have fond memories of events and time spent with hobbies that brought them much enjoyment. The backlash against nostalgia isn’t entirely from a younger crowd that doesn’t believe anything in the past could be better than what we have today, or just as good. However, many people do get nostalgic from time to time, and find a way to indulge it through watching old films and TV shows, dusting off games, looking up clips on YouTube, or consuming content such as a Wayback Wednesday feature. 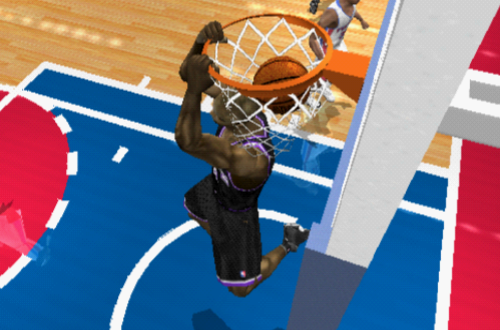 It happens as you get older as transitioning into a new phase of life and taking on more adult responsibilities does leave us yearning for simpler times on occasion. It’s tough not to grow more cynical as you age, or at least lose some of the wonder and excitement you had when you were younger. When it comes to basketball video games, if you’ve been playing them for a while, legacy issues and changes to the genre may leave you feeling like you’re no longer part of the core demographic. If you’re tired of dealing with microtransactions and games that emphasise the online experience, spending time with an old favourite can be extremely refreshing.

That’s something I’m sure people who aren’t as nostalgic can understand, but they may still be compelled to ask “How can you enjoy something so outdated?” This is a fair question. Basketball video games – for all the faults they may currently demonstrate – have come a long way over the years. They’ve benefited from the same technological advancements as other genres when it comes to aesthetics, physics, and overall depth of the experience. Older titles have issues of their own, and lack the advancements that are most welcome in their more recent successors. Whatever the merits of an old title, going wayback means that we’re playing generally less sophisticated games.

Of course, there’s a lot of fun in that simplicity. There’s a reason why games like the original NBA Jam hold up so well, and why its style continues to be the template for arcade basketball games today. It’s also possible to make peace with the issues in old games. We’re willing to make allowances, whether it’s simpler mechanics or less impressive graphics (contrary to Jim Ryan’s point of view). Again, some games do actually hold up quite well despite their age, while others turn out to be better than we remembered. There’s a lot to be said for revisiting a game when it’s been surpassed, and no longer carrying the expectations that come with being the newest release. 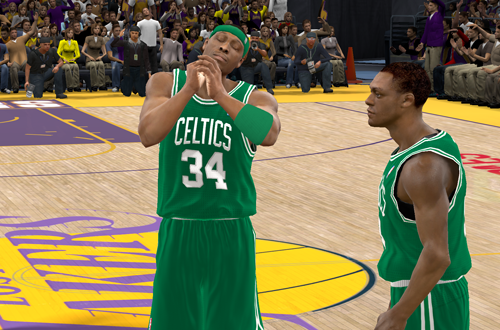 To that point, if you feel greatly dissatisfied with the current game, then returning to one that you can still enjoy is a wise course of action. If you’re not into the online scene, then a lack of online support (or smaller userbase, if the servers haven’t been shut down yet) isn’t an issue. Of course, oftentimes it’s a sojourn to the past, rather than going wayback permanently. There are many games that I can dust off and play for a while to indulge my nostalgia, but I couldn’t play them regularly ahead of a newer title. Going wayback can be about discarding a disappointing new game for a satisfying old one, but it’s often just about taking a short trip down memory lane.

The reasons for these brief visits are varied. Nostalgia can be comforting, so going wayback can be a means of self-care. Like an old movie or TV show, you may associate a certain hoops game with a happier time in your life, or a period that you’re feeling wistful for, for whatever reason. Something may jog your memory, and you want to check out an old game to confirm your recollection. You may have some unfinished business in a game, and feel inclined to go back to take care of it. It may be as simple as wanting a change of pace. If the limitations of older games aren’t a barrier for you, or you’re just feeling curious, it can be a lot of fun going wayback.

Beyond the nostalgia we have for video games, there’s also nostalgia for the NBA of yesteryear, and fascination with NBA history. As I’ve said on many occasions, old basketball games serve as interactive almanacs. They preserve a snapshot of the NBA as it was when they were released, or the end of the season they were set in if they received official roster updates. You can seek out footage and articles that cover players who had triumphant returns or forgotten stints, or a particular era in general. However, when you fire up one of those old games, it’s a rush of nostalgia to see those old players and logos, and you can make history come to life on the virtual hardwood. 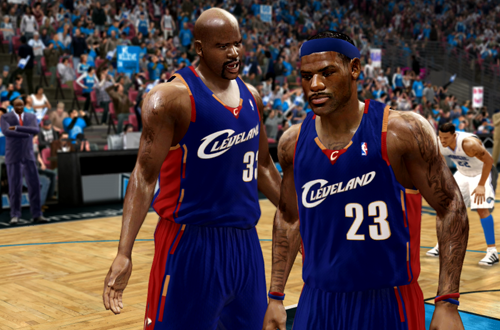 An appreciation for the history of the NBA and basketball video games is a huge factor in the desire to go wayback from time to time. That’s not to say that people who don’t retro game have no appreciation for history, but I would suggest that if you are inclined to go wayback, your interest is particularly keen. Some might argue that it’s a sign of being stuck in the past, and in certain cases there may be some truth to that. It would be a sweeping generalisation to say that everyone who enjoys going wayback is incapable of moving on though, just as it would be an unfair generalisation to say that anyone who prefers the contemporary has no respect for bygone times.

From the standpoint of content creation, I strongly believe it’s important to document and preserve the history of basketball games. It’s a genre that has produced some truly great and influential releases, and for those of us who are passionate about basketball and basketball gaming, there’s interesting history there. One of the goals I have with Wayback Wednesday, as well as our anniversary features for NBA Live, is to share stories and knowledge about older games. It provides proof and context as to how the genre has evolved. It’s a way to celebrate old favourites, as well as check out games I skipped back in the day, and share those experiences with my fellow hoops gamers.

Going wayback isn’t something that everyone can do, and that’s OK. Old games had their issues; none of them were perfect, and they haven’t all aged well. Nostalgia isn’t for everyone, either. However, there’s value in revisiting basketball games, good and bad. There are ideas that could be repurposed for new games moving forward. There’s personal curiosity, comfort, and enjoyment to be found. There’s challenge, and a sense of completion when we can wrap up some unfinished business. And of course, there’s the way that games act as reference materials for past NBA seasons. In that regard, they can sometimes be useful for modding projects, bringing nostalgia to new titles! 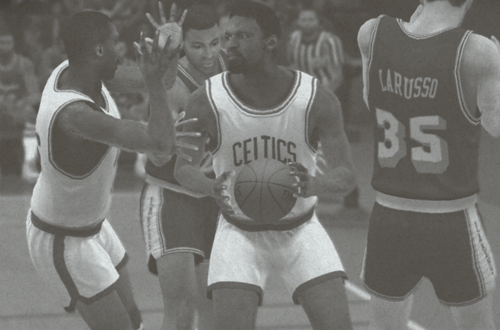 I’m obviously aware that in online discussions, a lot of people frame their disdain for something they dislike or are disinterested in as not understanding or being confused by it. It’s intended to be a covert way of bashing something and being condescending, only we recognise the technique. When someone says “I don’t understand how anyone can go back and play those old games”, it’s obvious that there’s an unspoken “and I think they’re stupid for doing so.” I’ve seen these comments everywhere, especially on Reddit when someone brings up an older title. There’s usually at least one commenter who sneeringly suggests that the person just play the latest NBA release instead.

For anyone who is genuinely asking that question without passing any judgement, I hope that I’ve provided some insight as to why many of us like to go wayback. There is fun to be had with older titles, whether it’s a quick trip down memory lane, or they become a regular part of our gaming rotation once again. In the second-hand market, older sports games – particularly the annual releases – lose their value because they’re outdated. For those who are enthusiastic about the history of both the sport and video games though, there’s actually great appeal in that older content. When the entire purpose is to go wayback, there’s no such thing as “outdated”, because it’s all relevant.

One final point: it’s very easy to get caught up in how a game has aged. As noted, Jim Ryan – Sony’s head of global sales – has scoffed at older games, dismissing them as “ancient” and wondering who would play them. Games are more than just graphics, as so many visually beautiful but creatively uninspired titles demonstrate. Furthermore, improvements to technology don’t retroactively invalidate being impressed with what was once cutting edge, but has since been surpassed. There’s value in going wayback that is missed if you adopt this myopic point of view. Besides, even bad games can be fascinating, and basketball games in particular can also serve as NBA time capsules. 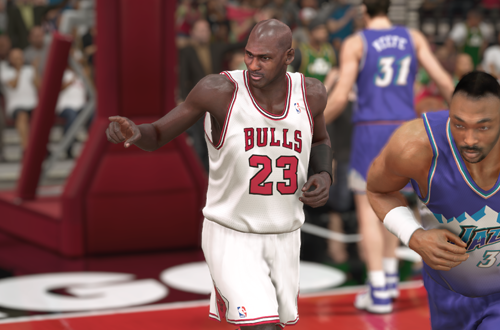 In a previous article, I’ve wondered about the future of nostalgia when it comes to basketball video games. Again, while some people won’t ever become nostalgic, I do believe it’s something that we grow into, and I’ve seen younger gamers beginning to express fondness for superseded titles. Whether it’s still holding NBA 2K11 in high regard, wanting to see the NBA 2K15 servers switched back on, or wishing that we could get a new NBA Street or NBA Jam game, there’s a new generation of nostalgia on the horizon. It’s just as valid as the nostalgia for the games that have become the real oldies, and I’ll always encourage people to go wayback when the mood strikes.